Skip to Content
Need help?
Donate
With nineteenth century Audubon prints now fetching record rates at auction, an art exhibit entitled Plants, Birds and Pollinators: Art Serving Science is more likely to evoke historic than contemporary associations.
However, the watercolor, ink, and pencil illustrations at the Denver Botanic Gardens’ El Pomar Gallery (exhibited through February 9, 2014) are all modern works. Collectors may regard them as decorative, but their primary purpose is functional. 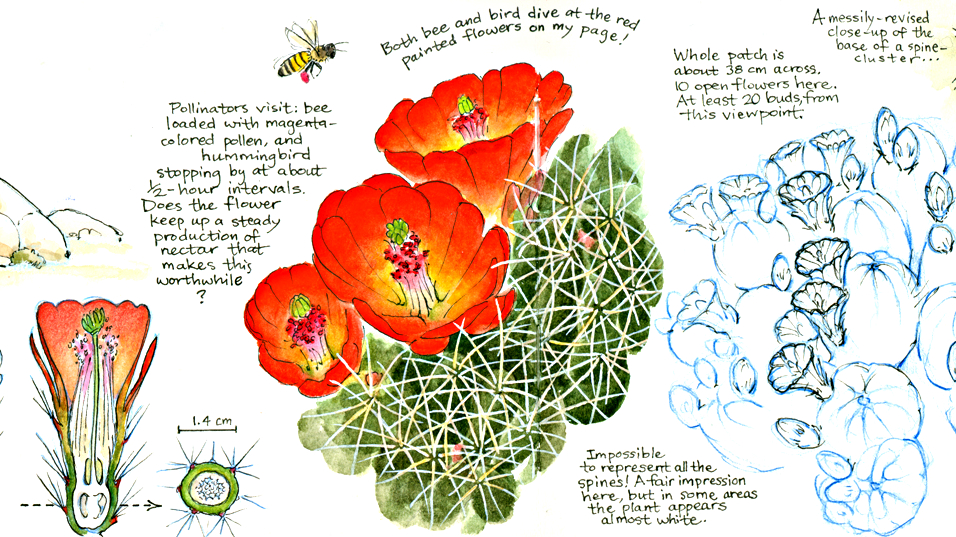 (Photo: Courtesy of Jenny Keller)This leads one to wonder if, in the era of Photoshop, Instagram and “selfies”, as time-consuming, labor-intensive and tedious form of documentation as scientific illustration is still necessary.
“Absolutely,” says John Clark, Science and Conservation and McBryde Senior Research Fellow at the National Tropical Botanical Garden in Kalaheo, Hawaii. “There is diversity within a species. Illustration offers us the opportunity to present the ideal or representative of that species.”
When asked to further unpack, he provides the following parallel: “Imagine an alien comes to Earth and they look at me and they look at Dennis Rodman…”
The alien would note the distinct similarities and differences between the flamboyant, 6’8” African American former basketball player and the droll, hazel-eyed research fellow. Having a simplified, “generic ideal human being” line drawing to cross reference would give the perplexed extraterrestrial a better chance at correctly categorizing both Clark and Rodman as Homo sapiens.
Erin Tripp, Assistant Professor of Ecology & Evolutionary Biology at the University of Colorado, Boulder, is equally emphatic that illustration is irreplaceable. While earning her doctorate at Duke University, Tripp worked with an illustrator to document rarely-seen Mexican plants, hoping her work would lead to more examples found in the field.
“In some cases I was successful. In some cases I found nothing,” Tripp says. “I put together a publication with all these twelve species illustrated in detail. Sure enough, after that paper was published someone wrote to me and said he found one. He was a natural history enthusiast. Lots of people don’t speak the language of botany, but everyone speaks the language of illustration.”
Jenny Keller, the Program Specialist at the California State University, Monterey Bay, Office of Extended Education Science Illustration Program­­ -- and one of the science illustrators featured in the Denver Botanic Gardens exhibit ­-- points out the advantages of being able to show a plant or animal in cutaways and close-ups. “You can point things out, you can highlight things and call the viewer’s attention to a certain detail by making it color or black and white.”
The two pages of Keller’s field journal, featured in a corner glass display case, come complete with marginalia and color keys.
“Being in the presence of an actual specimen is the best,” Keller says, explaining how she obtained the illustration featured in the exhibit. “I held the book up to the flower so I couldn’t see where the flower ended and the paper began. I ended up with my color palette.”
Her efforts did not go unappreciated. In testimony to Keller’s accuracy of color and line, hungry hummingbirds began dive-bombing the pages to investigate the two-dimensional flowers.
Susanna Speier is a freelance writer who has been published in Westword, The Daily Beast, The Denver Post, Poynter.com, Scientific American Blogs, Nature.com and Colorado Biz. She tweets at @SusannaSpeier .