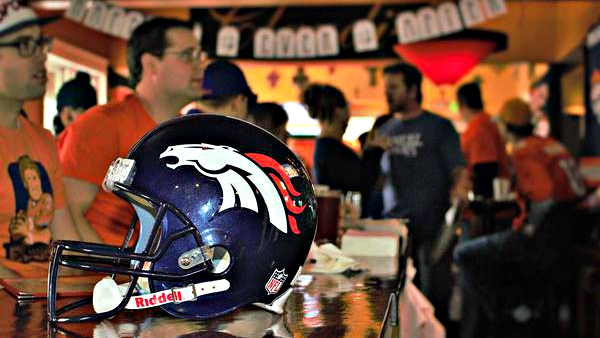 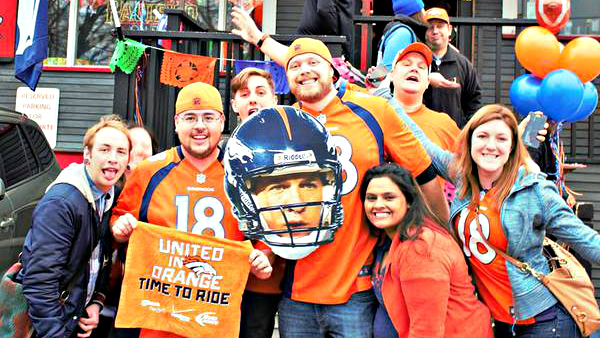 (Photo: Courtesy of David Johnson)&lt;p&gt;Broncos fans cheer on their team at a bar north of Seattle&#039;s downtown. Peyton Manning is with them in more than spirit.&lt;/p&gt; 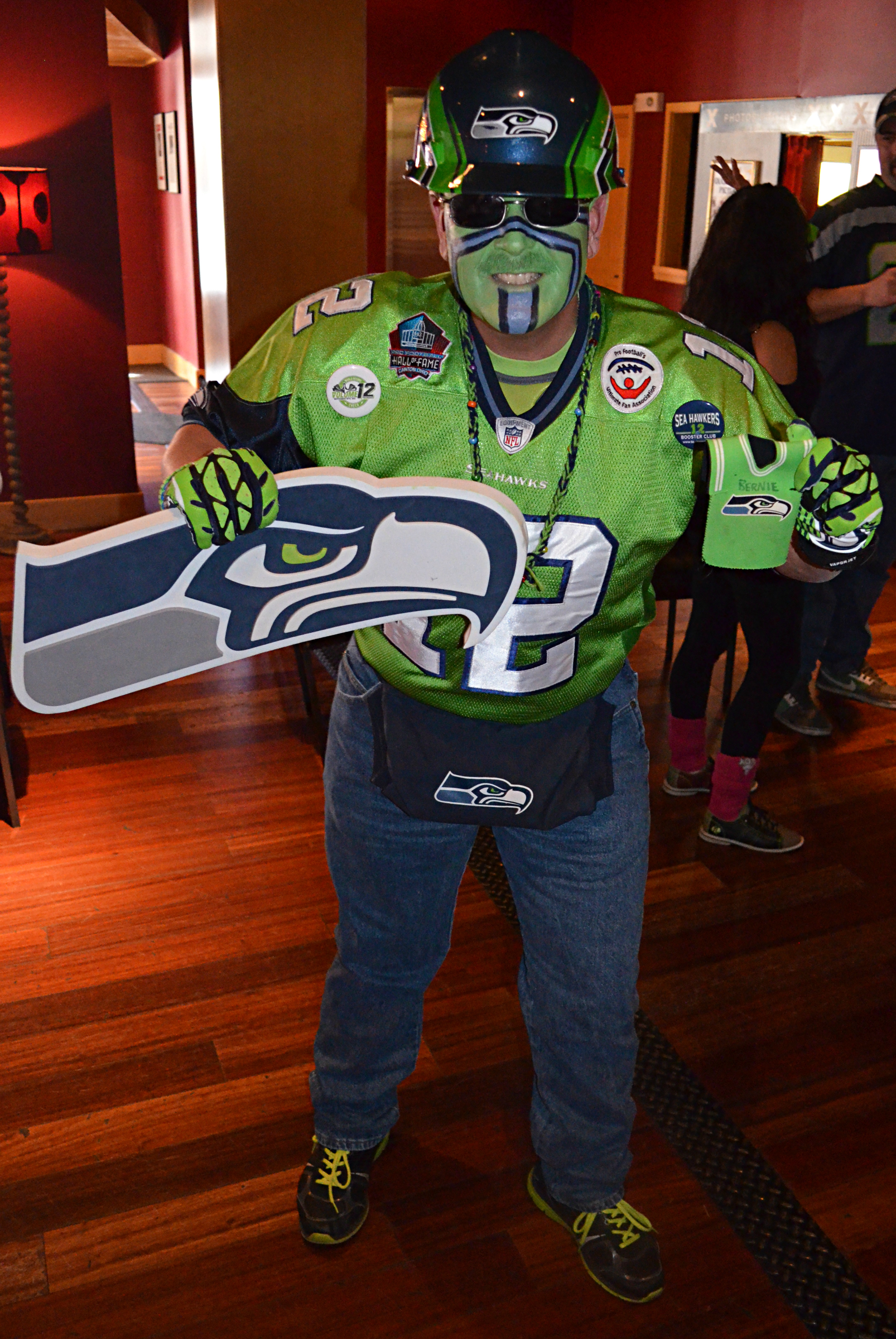 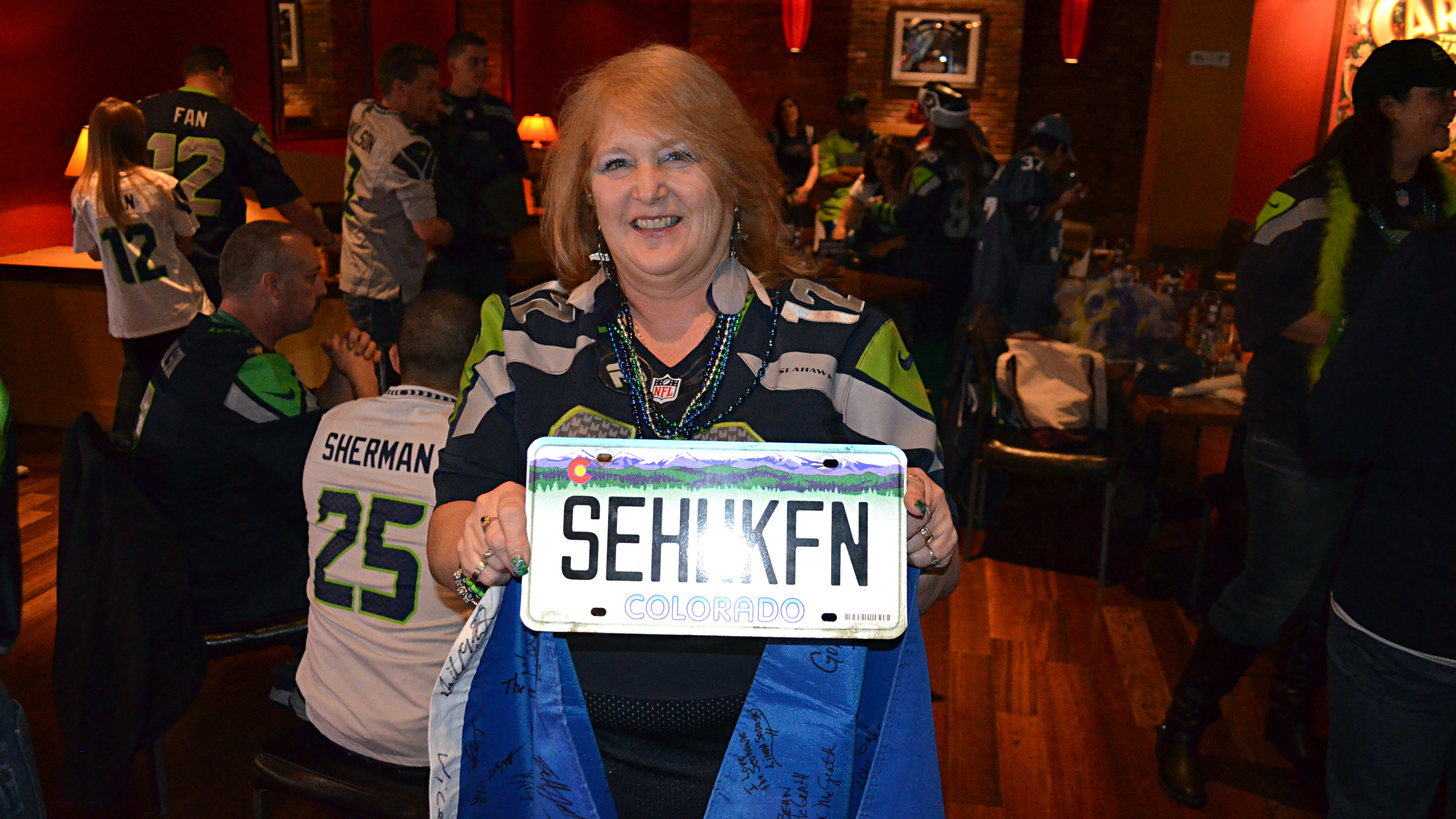 Heckling? Well, for some.

That's the case for Denver Broncos fans living in enemy territory in Seattle as well as some Seahawks fans who now call Colorado home.

Paul Gates, aka Bernie Hawk, started the Rocky Mountain Seahawkers and the group gathers to cheer on Seattle at the Lucky Strike bar and bowling alley on Denver’s 16th Street Mall.

Gates is really into to it. At a recent club meet up he came sporting face paint as well as a Seahawks hard hat, gloves and jersey. "We love it," he said of the fan club and cheering on the Seahawks.

He's so into it he attends as many Seattle games in-person as possible, leaving club member Sharon Verschuyl to take over as president.

Verschuyl too has a jersey and a nickname: Shay Hawk. She says being a fan behind enemy lines can be a cross to bear.

"It’s tough," she said. "We do the best we can. And try to keep a smile on our face. And we know we support our Hawks and we’re ready for the Super Bowl. "

It’s been a particularly difficult time since Seattle won the NFC Championship game.

Immediately after victory, on national television, Seahawks star cornerback Richard Sherman rubbed a lot of people the wrong way when he trashed talked his opponent and proclaimed his greatness. Verschuyl heard about Sherman’s rant. A lot.

But she adds Sherman is actually a good guy and points out he apologized for his post-game performance. Another Seahawker, Lynsey Nelson, is brave enough to wear a Sherman jersey. In public.

"It’s interesting especially when wearing Seahawks gear to the gas station or liquor store and Denver fans want to make comments," Nelson said. "After the whole Richard Sherman debacle, everybody was like, 'What’s with your boy Sherman?' We love him. He’s great."

So have any Broncos fans said anything particularly clever? "No not really. I wouldn’t say that’s a forte of Broncos fans," he said, and then laughed.

Nelson and Renee Ferguson came to the Rocky Mountain Seahawkers gathering with their 4-month-old son, Wyatt, who sported a tiny Marshawn Lynch jersey. The infant has a bold Super Bowl prediction, if you speak baby.

When asked who would win the game, Wyatt launched into some very loud sounds.  His parents quickly asserted he was predicting a Seahawks victory.

In the Pacific Northwest, a group of Bronco fans in Seattle is equally confident the game will go their way.

Exciting moments, like when Denver clinched the AFC Championship, can really rock the bar where they gather to watch games.

"It’s not a huge place so as soon as you’ve got dozens of Broncos fans in a small place like that it feels like you are going to pull the building off the foundation," said Broncos fan Shawn Leeth. "It’s just amazing this absolute sense of team pride and happiness when some big play happens."

Leeth is a native of Engelwood, Colorado. He says he misses the days when the Broncos and Seahawks were both in the same division, facing off twice every year.

"It was fun rivalry," said Leeth. "It wasn’t a super-hated rivalry. They’re not the Raiders. They were great games, so being able to get this Super Bowl gives me that feeling."

Curt Siffert now lives in Seattle after growing up in Fort Collins. His advice for fans living in enemy territory?

"Try have sense of humor," Siffert joked. "Seattle fans are nice once you get past the obnoxiousness."

Siffert admits he's actually grown into into something of a Seahawks fan. But not this Sunday.

But he warns them not to get too cocky; "I had to sit through three pain-staking Super Bowl losses. You don't have that yet."

The Seahawks have only been to the Super Bowl once. They lost the game in 2006. The Broncos lost three times before winning back-to-back Super Bowls in the 1990s.

Several of the displaced Broncos fans have been taken aback by one question they're hearing from Seattlites.

"People ask me now, 'you live here, and now who are you going to root for? Isn’t it kind of a tough decision?' I say I don’t understand the question," Broncos fan Annie Engelker said. "I don’t think there’s any doubt I am going to root for the Broncos."

Engelker grew up as Broncos fan in Nebraska. In Seattle, she’s faced some gentle ribbing at work. She fears that could get much worse if the Broncos lose.

"All I pray is that they win because if they don’t it will be a hell of a week coming back to work and really dealing with the Seahawks fans," she said.

And that’s about what it comes down to for fans behind enemy lines. They’re confident their team is going to win the Super Bowl. But they really just hope they don’t lose.