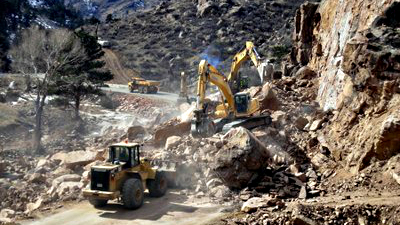 (Photo: Courtesy of CDOT)The Colorado Department of Transportation is working to flood proof  highway U.S. 36 between Boulder and Rocky Mountain National Park before this spring's runoff from the mountain snowpack.

The critical route for park visitors closed after last fall’s massive flooding. Temporary repairs allowed it to reopen. Now, near Lyons, Colo., CDOT is moving the highway away from a creek onto bedrock closer to the mountain.

"What we found during the floods is those parts of the road that are most vulnerable were those pieces that were on engineered slopes that were sturdy and stable but when it came to the river coming through they couldn’t withstand it," Amy Ford with CDOT said.

The work covers a 12-mile stretch of Highway 36. Ford says work is being staggered so the road does remain open during construction although drivers are warned to expect delays.

Ford says once the work is done on Highway 36, it will provide a detour route so permanent repairs can be made to U.S. 34 and state Highway 7, which also are key routes to the national park.