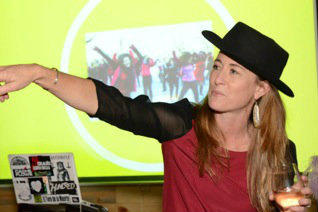 LOCAL Theater Company in Boulder is a company run entirely by women. The organization presents its third LOCAL Lab new play festival this weekend at eTown Hall. The event dramas that deal with a range of issues, from spiritual faith to plagiarism.

“We are interested in plays that shed light on an issue," Pesha Rudnick, LOCAL's artistic director and co-founder says. "But we really like to focus on the story and the people involved and how they are affected.”

CPR caught up with Rudnick  in anticipation of the festival.

CPR: The festival is now in its third year. How has it grown over this short amount of time?

Pesha Rudnick: LOCAL Lab started as an experiment. The number of new play submissions has increased, making the selection process arduous though a great deal of fun. Our three-play pass holder ticket sales have quadrupled. And we've moved over to eTown Hall in downtown Boulder.   Everything is within walking distance.

CPR: This year’s plays explore a range of contentious issues, from climate change to copyrights. Is that intentional?

Pesha Rudnick: Not at all.  We head into the selection process with a clean slate.  We're looking for great stories and great storytellers.

CPR: The 2014 festival pairs three playwrights from outside Colorado with three directors from LOCAL. Why did Local Lab go that route as opposed to featuring works by local writers?

Pesha Rudnick: LOCAL Lab has a "solicited submission only" policy, meaning we only accept plays we've requested from theater colleagues, agents and literary managers. That is unless you're a Colorado-based writer. We don't have the woman-power to have open submissions yet. We have a record number of local submissions this year, three of which made it into our top 12. We select plays without knowing the playwrights' backgrounds, and ultimately these out-of-towners made it to the final round.  It's just the way the cookie crumbled, though we loved featuring a local playwright last year.

CPR: You will direct “Thoreau, and Other Assholes” by Kyle Warren. What drew you to this play and did you have a strong interest in intellectual property beforehand?

Pesha Rudnick: I was drawn to Kyle's complex characters and the way he manipulates genre and language.  I don't have a specific interest in intellectual property or who owns an idea, but I am fascinated by what people do when their worlds' are turned upside down.   I also love a writer who is willing to take a risk. This week alone, Kyle cut two characters, added a scene and is playing with an alternate ending.  He's willing to take advantage of the development process and experiment with his work.  Nothing is precious in new play development.

CPR: What distinguishes LOCAL Lab from other new play festivals?

Pesha Rudnick: LOCAL's pre- and post-show rituals make the festival unique. Play development is not a stuffy, intellectual experiment. It's messy and fun.  DJ Savior Breath spins music in the hall before each of our readings.  Music encourages audiences to leave their busy lives and settle into a receptive, emotional place before a show.  After the show we make audiences work!  Jill Rafson, our guest from Roundabout Theatre in New York City, will facilitate a 20 minute post-show discussion. A lot of theaters are moving away from traditional post-show discussions where the audience asks questions of the artist; we turn things around, so the playwright and LOCAL ask the audience questions about the play.  We find this helps with artistic problem- solving, and we're better able to grow the plays. Everyone's hard work is rewarded.  LOCAL never does anything without throwing a party afterward. Boulder is a perfect place for new play development because of our whip-smart audiences.  People are genuinely interested in new work and want to help to make the shows more poignant.