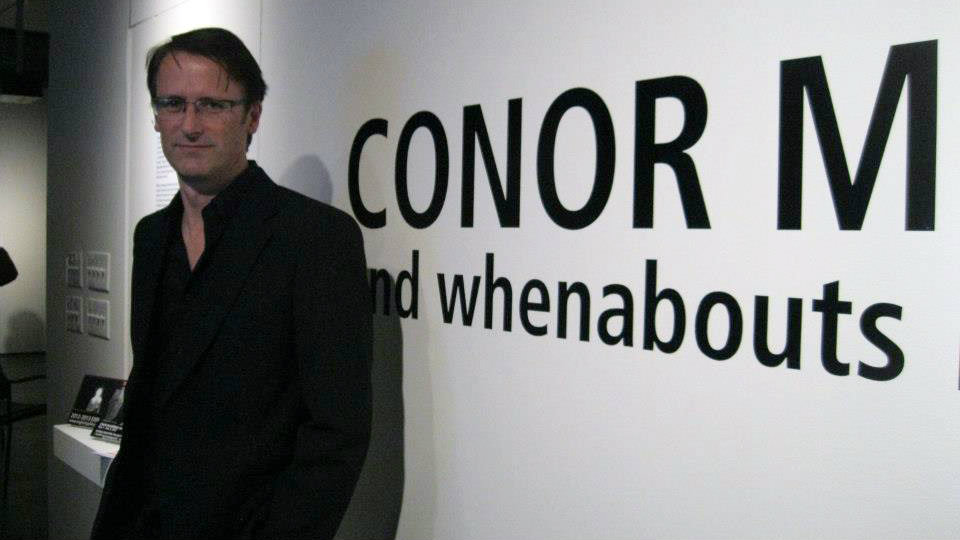 (Photo: Courtesy of Emer MacDowell)Famous for its length and longevity, Colfax Avenue is an essential part of Mile High City history.

Tomorrow, new media artist Conor McGarrigle will walk the entire 26-mile length of the avenue, from the eastern plains, through Denver, to the edge of the foothills.

McGarrigle is exploring Colfax as the subject for his latest work, “Walking West.”

“I see the walk itself as a research project that is open-ended,” McGarrigle says. “My hope is that it will act as a catalyst to get people talking about Colfax and its position in the life of Denver.”

McGarrigle will use satellite imaging and on-ground photography to document the trek, which he will physically trace with a device (think: a surveyor's wheel) that sprays a chalky substance. The result: a white, dashed line – like on a football field – that emulates the pedestrian areas marked on a map.

The project is intended to underscore walking as an important urban activity. And McGarrigle will invite people to join him at any point along his roughly eight-hour walk to share their stories about Colfax.

The project will culminate in an exhibition documenting the walk. McGarrigle intends to produce a 60- to 100-foot long print of the satellite photograph.

CPR recently caught up with McGarrigle, whose walk will begin at 9 a.m. at the intersection of East Colfax Avenue and I-70 on Friday, April 11.

CPR: You recently relocated to Colorado from Ireland. What brought you to Denver and what strikes you about the city?

Conor McGarrigle: I came to Denver to take up a position as an assistant professor in the Emergent Digital Practices program at the University of Denver.

Obviously the first impression is the landscape, which is on a scale that's a completely new experience for me. I love the big sky, the sunshine and the mountains. It rains a lot in Ireland, so the Colorado dryness is a welcome change. But I'm still getting used to the sudden spring snow.

As a walker, Denver isn't particularly walking friendly. The car culture is still strong. But I can see signs that this is starting to change. I'm very interested in watching how that develops.

CPR: Why did you decide to center this artistic effort on Colfax?

Conor McGarrigle: The original idea for this project came from a desire as a newcomer to explore and get to know my adopted city. Colfax is such an iconic street in its position – almost exactly bisecting the city – as well as its length and orientation – nearly perfectly east to west. It seemed the natural choice to walk along. This was confirmed when I discovered that it was the longest continuous street in America.

Colfax also has a special place in Denver. Its reputation is decidedly mixed. It was once called the longest, wickedest street in America, yet it seems that everyone in Denver has a Colfax story to tell. It seemed to me that if you wanted to hear the story of Denver, Colfax was a good place to start.

CPR: What drives your interest in digital technologies?

Conor McGarrigle: Digital technologies are such a significant part of all our lives today that I think it's vital that artists engage with them in a critical way. I feel that anything that integral to everyday experience represents an important subject for art. While talk of the digital revolution may be something of a cliché, we are nonetheless living through an accelerated pace of change to the point where thinking of a world without digital technology is almost unimaginable. My work reflects on these changes, examining the ways technology is now part of everything we do and teasing out the implications – positive and negative – of these developments.

I focus on changing ideas of place coming from the fact that we all carry mobile devices that know and report our position constantly. This location-awareness and ubiquitous network access are changing how we experience urban space in subtle and interesting ways. I believe there is much to be gained from exploring these shifts in our perceptions of space and that understanding these shifts will be important in shaping the future of cities.

CPR: Explain some of the other themes that "Walking West" will evoke.

Conor McGarrigle: The project is also about the importance of walking for the contemporary city. The very act of walking has become a marginalized practice in many American cities. Yet by walking we can experience the city itself, at a human pace, as a space of discovery and encounter. The symbolic act of walking Colfax Avenue acts as a lens to focus discussion on the role of this street in the cultural, social and political life of Denver.

I also see the walk as a "psychogeographic" exploration of the city. This has its historic roots in the post-war organization known as Situationist International, a group of artists and political theorists who practiced exploring urban space based on the individual ambience of particular locations.

The project also follows in the tradition of walking as art exemplified by seminal works from the 1960s by artists such as Richard Long and Robert Smithson. This tradition is currently undergoing a renaissance through the work of contemporary artists like Francis Alys.

The project has additional layers of personal resonance for a recent immigrant to the United States, as it symbolically re-enacts the historical migrants' westerly journey.

The street is also named for Schuyler Colfax, the 17th U.S. vice president, who made his political name opposing Irish immigration in the 19th century.

CPR: You have invited people to join part of the walk. What impact do you hope this has on the project?

Conor McGarrigle: Most of my work has a participatory aspect. I find that by inviting people to be part of my projects, I get an infusion of ideas and experiences that always enrich the work. For “Walking West,” I've invited people to join me to discuss what I'm doing and why, to share their Colfax experiences and help me uncover the stories, connections and associations that transform a street like Colfax into a series of neighborhoods.

McGarrigle will also appear at a "Walking West" afterparty at Counterpath Gallery in Denver at 7 p.m. on Saturday, April 12.