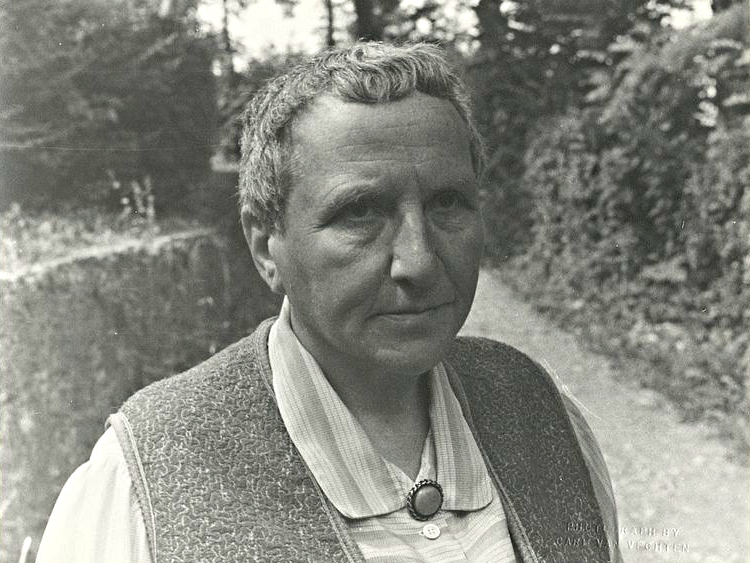 (Photo: Courtesy of the Van Vechten Collection by Carl Van Vechten, 1880-1964)San Francisco-based publisher City Lights has released a centennial edition of Gertrude Stein’s “Tender Buttons,” a 1914 book of poems that has proved to be inspiring -- and sometimes impenetrable.

For the first time, this new edition includes corrections the author made in a first edition copy discovered at the University of Colorado Boulder thought to have been gifted by Stein herself to literary critic and CU professor Donald Sutherland.

Supposedly, Sutherland met Stein -- an American author and art collector and one of the most important figures of the 20th century avant-garde literary scene -- in Paris after serving in Europe during World War II.

He brought the book back to Colorado where it is now housed in CU’s Norlin Library.

In 1903, Stein left her medical studies incomplete to emigrate to Paris where she would live most of her life, befriending and influencing the likes of F. Scott Fitzgerald and Ernest Hemingway.

Although she wrote much before and after, 1914’s “Tender Buttons” is Stein’s best known work.

Broken down into three sections -- “Objects,” “Food,” and “Rooms” -- "Tender Buttons" presents domestic life in a series of poems in prose. However, none of these take the form of a realistic snapshot in words.

What we find is a selection of day-to-day objects presented from multiple viewpoints and contexts.

This approach led to the book being referred to as "cubist literature" -- the poetic answer to the paintings of Stein’s friends and contemporaries Pablo Picasso and Henri Matisse, whose work is currently on show in the Modern Masters exhibition at the Denver Art Museum.

With this in mind, one could be forgiven for thinking that getting below the surface of “Tender Buttons” is a more challenging experience than reading poets such as Maya Angelou or Billy Collins. Even seasoned readers of experimental literature find Stein's work challenging.

But it is in this difficulty that I and many others have found great value in the poems.

“Tender Buttons” demands engagement from the reader in a way that few books can. Even the strange titles of its poems, such as “Careless Water” or “Glazed Glitter,” immediately arrest the attention.

As with such famously difficult reads as James Joyce’s “Finnegan’s Wake,” getting through "Tender Buttons" feels like a badge of honor. Lines like, “a really splendid address is not shown by giving a flower freely,” have alsways felt like they have pushed me further from meaning rather than bringing me closer.

I tried to read “Tender Buttons” several times before I managed to get through it. And I continue to read and reread Stein’s slippery text -- I have covered the pages from beginning to end more than a dozen times by now -- and always find new ideas in it.

What Stein achieved was to create a book that changes with each revisit, the reader making meaning together with the author.

Like the objects in “Tender Buttons,” it is fitting that Sutherland’s copy could have been hidden in plain sight for decades in Colorado. With the new edition marking the centennial anniversary of the work, we have the opportunity to finally share in the author’s insights into her own writing.

To mark the 100th birthday of “Tender Buttons,” Denver-based press, gallery, and bookstore Counterpath will host a full length reading of the book, free and open to the public, on Monday, April 28th, 7pm at 613 22nd St, Denver, CO 80205, in conjunction with 100 Paintings in 24 Hours by artist Teresa Albor. Copies of the new edition will be for sale.

Richard Froude is a writer living in Denver, CO. He teaches classes at the Lighthouse Writers Workshop and can be found online at RichardFroude.com.