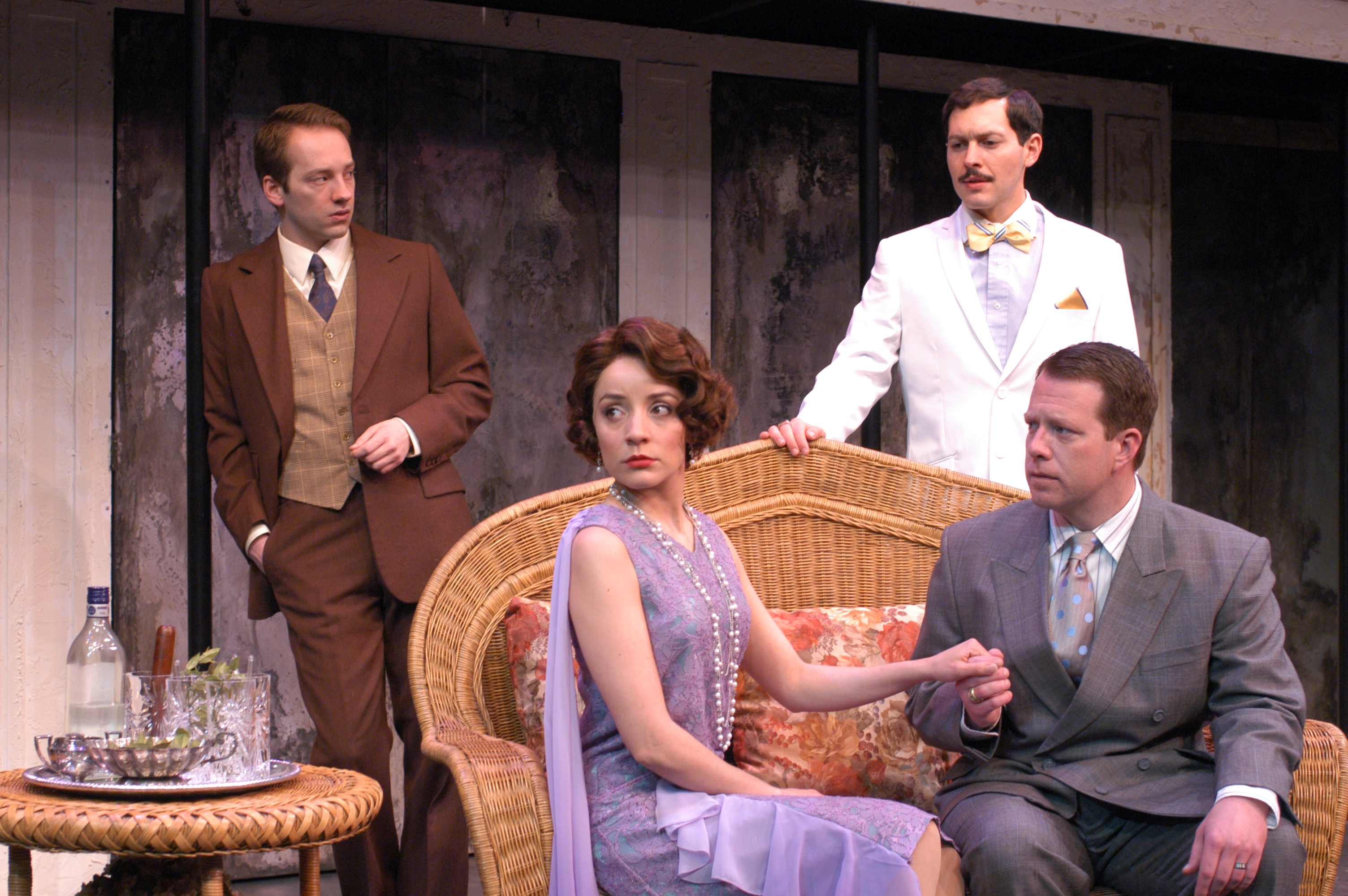 (Photo: Courtesy of the Arvada Center for the Arts and Humanities)Written in 1925, “The Great Gatsby” by F. Scott Fitzgerald is a stalwart of American literature, especially in high school and college classrooms.

The work’s enduring popularity is evident from the slew of stage and screen adaptations that have appeared over the decades.

Here in Colorado, The Arvada Center for the Arts and Humanities is currently presenting the Los Angeles-based dramatist Simon Levy’s stage adaptation, the only theatrical retelling of Fitzgerald’s novel authorized to date by the author’s estate.

The novel tells the story of a poor but ambitious young man who reinvents himself to fit into the world of the 1920s moneyed elite of New York in order to win the woman he loves.

It offers rich source material for artists and impresarios because of the links between Fitzgerald’s world and the one we live in today.

“I think it’s very interesting to see how the 1920s parallels 2014,” actor Jamie Ann Romero, who portrays the love interest, Daisy Buchanan, says. “I think we could set the play today and it would still make sense.”

The vast wealth and class disparities depicted in the novel – which still ring true for many people today – may partly explain the enduring popularity of “Gatsby.”

“There's a definite class distinction in this story,” Gavin Mayer, who directs the Arvada Center production, says. “The 1920s are repeating themselves all over again. Here we are with the rich get richer and the poor get poorer, and we're experiencing that today just as they did in 1922.”

Levy’s adaptation has already received more than 100 productions in just 18 months. In addition to the Arvada Center, 13 professional and college venues around the U.S. are planning to produce Levy’s version of “Gatsby” over the next year.

“The amazing thing about the novel is that every generation comes to it now and sees itself reflected in that novel,” Levy says. “Because the novel is so rich, so deep, so expansive and so iconic in terms of American dreams, myths and values, I think artists are continually drawn to it to tell the story in their art form.”

The history of “Gatsby” adaptations extends almost as far back as the publication of the novel itself.

In 1926, only a year after the book was published, “Gatsby” appeared as a Broadway play. Fitzgerald helped to adapt that play into a silent film, released by Paramount Studios that same year.

There is no known surviving copy of the 80-minute film, except for this trailer which shows that it likely emphasized the decadent aspects of 1920s New York to help make it a hit.

In 1949, movie star Alan Ladd portrayed Gatsby in a version with film noir characteristics. The movie more heavily focused on the bootlegging aspects of the Gatsby story, setting it in a gangster world.

“'The Great Gatsby' is a gangster novel, with parties, booze, sex and murder – all fueled by money,” James West, a professor of English at Penn State University who is editing a 17-volume edition of Fitzgerald’s works for Cambridge University Press, says. “It contains the same ingredients you find in ‘The Maltese Falcon’ and ‘The Big Sleep,’” West says.

Other notable film adaptations include Robert Redford’s 1974 turn as Gatsby which was more faithful to the novel’s plot than the 1949 version.

“This film is about language, style, social class and yearning to move up – preoccupations of the 70s,” West says.

And there is the glitzy 2013 movie by director Baz Luhrmann, which amped up the decadence once again and has earned $350 million in worldwide box office receipts to date. That's twice the box office of Luhrmann's equally star-studded "Moulin Rouge."

Another film, “G,” released in 2002 by director Christopher Scott Cherot, was more loosely based on the Gatsby story and modernized: In Cherot’s film, Gatsby becomes a hip-hop mogul.

According to West, this adaptation “caught the movement and action, and the underlying themes of race and ethnicity in the novel.”

The British dance company The Northern Ballet debuted its interpretation of the story in 2013. The work featured choreography by David Nixon and dancers in glittering Jazz Age outfits moving to an original jazz score by Richard Rodney Bennett.

In 2007, The  Atlanta Ballet used existing jazz recordings and melded ballet with period dance forms such as the Charleston and swing to help transport audiences to Gatsby’s world.

This adaptation, choreographed by John McFall and Lauri Stallings, has also been performed by the Pittsburgh Ballet.

Meanwhile, John Harbison, an American composer of vocal and orchestral works, created an operatic version for the Metropolitan Opera’s 1999-2000 season. Harbison evokes the atmosphere of the 1920s with melodies inspired by the era.

The opera underlines the emotional currents in “Gatsby” through music, focusing on the characters’ loss of illusion. As in the 1949 Ladd film, it also emphasizes Gatsby’s gangster roots.

Meanwhile, San Francisco’s Opera Parallele and the Aspen Music Festival commissioned a reduced-orchestration version of Harbison’s opera from composer Jacques Desjardins. This version for smaller forces shrinks the orchestra from 90 to 30 players, making it more economical to mount.

All the various adaptations point to the ongoing resonance of its themes, West says.

“Even in the dot-com boom we were talking about Gatsby as emblematic of American striving and desire for success,” West says.  “We can identify with him, and with his aspirations to be someone other than a guy from the Midwest.”

“The Great Gatsby” runs through May 25 at the Arvada Center for the Arts and Humanities. For tickets and information visit http://arvadacenter.org/.