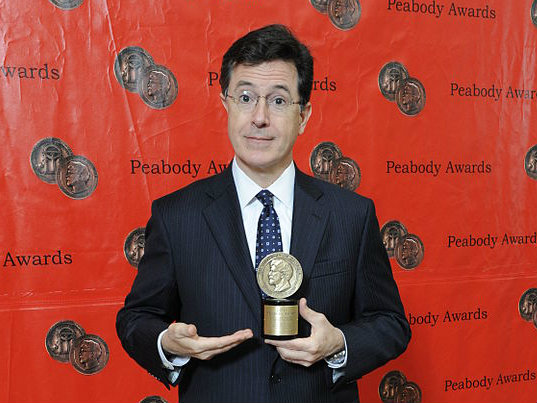 But not too long ago the “Two Tenors” sang on “The Colbert Report.”

Did you notice how he held a handkerchief just like Pavarotti used to? That wasn’t by accident.

Colbert knows a thing or two about opera. Turns out that Colbert did some singing at the music and opera festival in Spoleto, Italy, while he was in college. Opera, he says, is “worth the ticket.”

If you had five minutes to talk with one of the world’s greatest tenors, what would you ask? Colbert seemed to be bursting with questions. Domingo hardly got an answer in:

Colbert’s musical tastes can be seen through the artists who have appeared on his show over the years. Elvis Costello is a semi-regular as is cellist Yo-Yo Ma.

While Colbert invites a wide range of musicians to appear on his show, it’s clear he has a love for classical music. Composer Philip Glass, violinist Itzhak Perlman, conductor Lorin Maazel and classical music critic Alex Ross are just some of the classical guests who have appeared.

If the past is any indicator of the future, we can hope that his broad musical taste will follow him into his new role and that we’ll be seeing more classical guests on “The Late Show”.

And who knows? Maybe Colbert will invite Domingo and Carreras to the show and stand-in for Pavarotti for a Three Tenors “reunion."

By the way, when he’s not writing sarcastic political humor or singing opera arias, you can find Stephen Colbert teaching Sunday school at his Roman Catholic church.