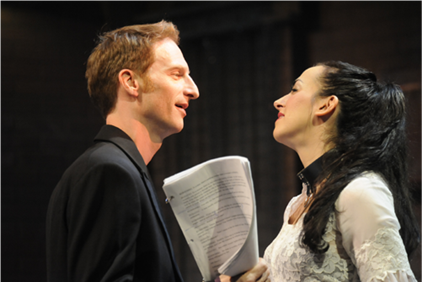 (Photo: Courtesy of Michael Ensminger)The Denver premiere of David Ives’ “Venus in Fur” opened last Saturday at Curious Theatre Company. The play picked up two Tony nominations in 2012, for Best Play and Best Actress, with Nina Arianda winning the latter in the role of Vanda Jordan.

In the play’s showbiz-oriented, S&M-fused narrative, Vanda shows up hours late for an audition with director Thomas Novachek (Brett Aune), who bemoans the quality of the talent he’s witnessed that day.

Novachek is looking for a leading lady to play the part of Wanda von Dunayev in an adaptation of the 1870 novel “Venus in Furs” by Austrian author Leopold von Sacher-Masoch (who inspired the term “masochism.”)

Colorado Public Radio caught up with award-winning Denver actress Karen Slack, who is playing Vanda, about her approach to the role.

CPR: What excited you most about this role when you were introduced to it?

Karen Slack: I have not seen the play performed or the film. I'm one of those actors who prefers to not see anything prior, if I can help it. I don't really like getting other people’s choices or interpretations in my head. I read the script last year when Chip Walton, Curious Theatre’s producing artistic director, said that he wouldn't do the show without me. After reading it, I knew that I didn't want to do it without him. It's the kind of show that I knew was important to be super comfortable in. I was excited by the intensity of the character and the delicious arc of the show. I knew that it was going to be a challenge, physically and emotionally, and I have never been one to shy away from a challenge.

CPR: What insights have come to you during the rehearsal process regarding the role and your interaction with your castmate Brett Aune’s character?

Karen Slack: Everyday there's another discovery. I think the biggest one has been how much of a power struggle this play is. The construct of actor and director in an audition automatically sets you up for an interesting power dynamic, and how that dynamic twists and turns is fascinating.

CPR: Are there any auditions that you have done in real life that provided you with touchstones for this role?

Karen Slack: I have definitely experienced being late, being rained on and feeling as though I shot myself in the foot before I even walked in the door. I remember one audition in which the director had us all do some strange animal interpretations. He wanted to see us as snakes, bears and snails. He claimed that he was looking to cast us based on the animal movements. Mind you the play had nothing to do with animals. I think he probably just wanted to torture us and have a good laugh later. Talk about power. Where else can you get a bunch of strangers to roll on the floor for you? Crazy! I started to deliberately tank the audition, for obvious reasons.

CPR: Have you worked with Brett Aune before and, if so, how did this affect the emotional dynamic, which at times is quite intimate?

Karen Slack: I have worked with Brett. It was ages ago ... in children's theater. I don't think that helped us here too much. But, we have been friends for quite some time, and are even on the same fantasy football league. The role of Thomas is very important and must be someone that I felt safe and comfortable with. It is extremely intimate, physically and emotionally -- and mentally for that matter. Brett is a very present actor with a very sweet heart and kind nature. He makes it easy to feel comfortable. It helps that we're friends. I can't imagine walking into this role with an unknown actor and an unknown director.

Bob Bows has been writing reviews and features about theater for 18 years for various venues including Variety, The Denver Post, KUVO-FM and Rocky Mountain PBS. His reviews are posted online at www.coloradodrama.com.