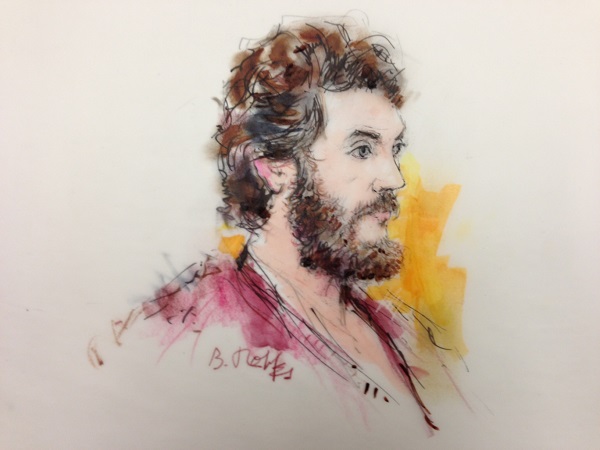 (Sketch: Courtesy of Bill Robles)The U.S. Supreme Court has turned away an effort to force a Fox News reporter to reveal her sources for a story about James Holmes, the man accused in the 2012 Aurora theater shooting.

The justices did not comment on Tuesday, leaving in place a decision by New York's top appellate court that shielded Fox News reporter Jana Winter from being called to testify in a Colorado court.

Defense attorneys for Holmes believe someone involved in the investigation broke a judge's gag order by telling Winter about key evidence, a notebook depicting violence that Holmes allegedly sent to his psychiatrist.

Attorney Karen Steinhauser, a former prosecutor who has been observing the case, says if Winter had been forced to testify, it might have cast doubt on the honesty of some witnesses.

“This doesn't affect the case substantively with regards to the main issue," Steinhauser says.  “At issue is whether James Holmes was sane or insane at the time.”

Holmes is accused of killing 12 people and injuring 70 others during a mass shooting at an Aurora movie theater in 2012.  If convicted, he could face the death penalty.

Holmes is pleading not guilty by reason of insanity.