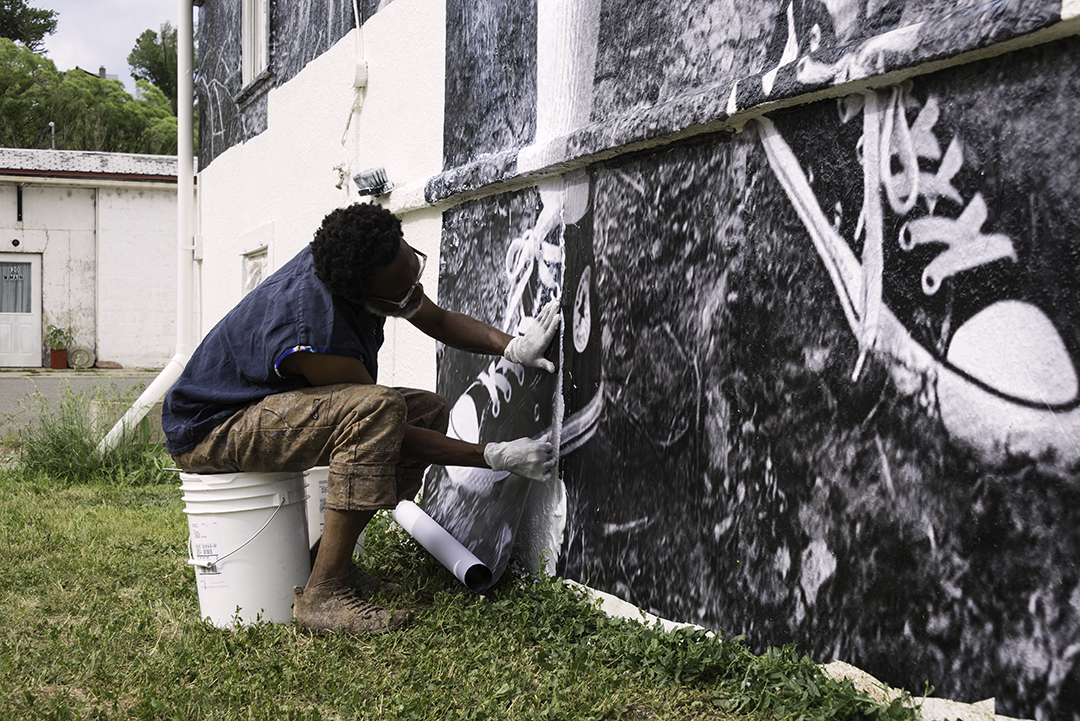 (Photo: Courtesy of Mary Hockenbery)A small group of people recently gathered outside on a sunny afternoon to look at a new mural on the west side of the Church of Art in Hotchkiss, Colorado.

"It's so unusual and so well done," onlooker Cheryl Day said while taking in the image. "I don't even know how they did it."

The mural is a black and white photograph of Mezli Hill, a young Hopi girl. In the picture she has her hair in two braids and is wearing a white dress and white stockings along with a pair of black and white Converse high-tops. The photo shows Mezli working in her family’s corn field on the reservation in Arizona.

The mural by Chip Thomas is 25 feet high and 40 feet wide.

"I don't even know how Thomas got it onto the wall and how he got it to fit exactly," another passerby, Chris Allen, said. "It wowed me."

Photographer Mary Hockenbery owns the Church of Art, a creative space and gallery located in Hotchkiss, a town of around 900 residents on Colorado's Western Slope.

Hockenbery contacted Thomas after seeing his work four years ago.

“I first saw Chip Thomas’ work when I was driving across the reservation in 2010," Hockenbery says. "It made me pull a fast U-ey at 65 miles per hour."

Thomas is a photographer, street artist and physician who lives and works on the Navajo Nation. His work can be seen from the road on structures across the reservation in Northern Arizona. 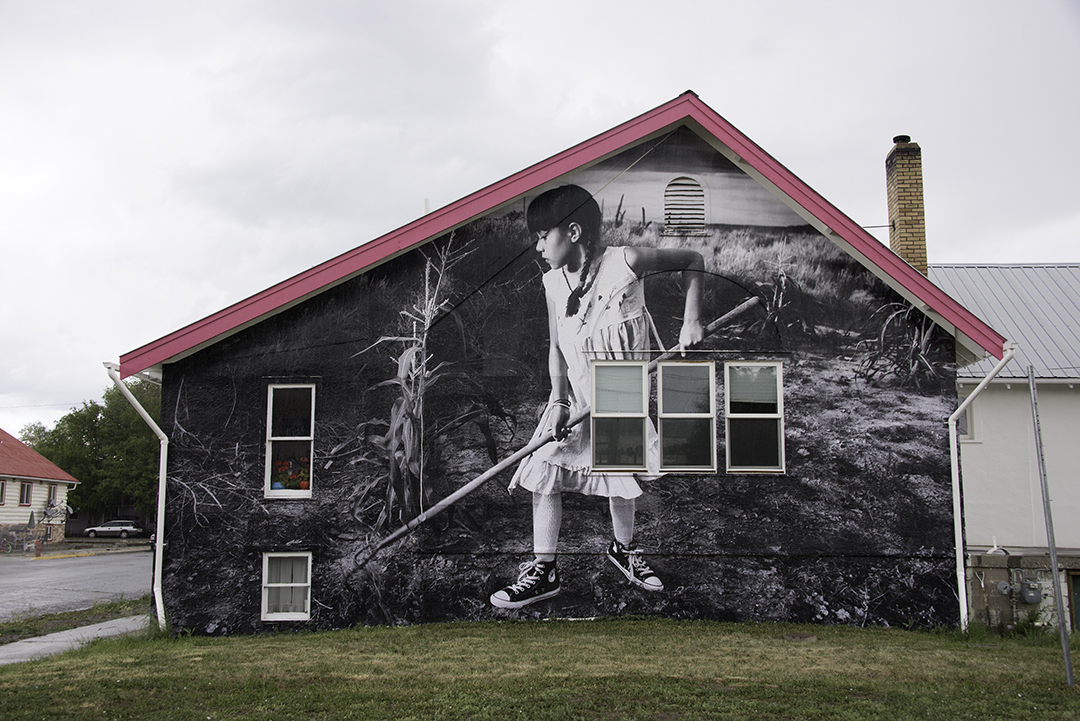 (Photo: Courtesy of Mary Hockenbery)To create a mural, Thomas first takes a digital image and then scales it in Photoshop to fit on a structure. He prints out the image in large panels and then places it on his canvas which could be anything from an abandoned building to a roadside stall.

Hockenbery said the first Thomas piece she was saw was of a Navajo grandfather on the side of an abandoned gas station.

"The next one I saw was of three code talkers probably in their 70s or 80s in their uniforms, maybe in parade formation," she said. "I’m not really sure, but they were cutouts and they were put on one of those roadside stands. And, honestly it looked to me like they were walking out of the desert into some other dimension."

Hockenbery started following Thomas’ work on social media and corresponding with him via email.

In 2013, Hockenbery bought an old church with the intention of turning it into a studio and arts space. She originally wanted to visit Thomas on the reservation, but instead invited him last fall to present his work at the Church of Art.

“I sent him a picture of the west face of the church not consciously asking for him to do something, but just to show him because I love the building so much," Hockenbery says.  "And he sent it back with the picture of Mezil on it and I was bowled over. I just couldn’t believe that could happen.”

Thomas traveled to the North Fork Valley in early June and installed the mural in two days with the help of an assistant.

"I think the mural fits the space nicely not just the composition of the piece but the theme of the piece I think matches the space where it was installed," Thomas says. "And with the opportunity to install in a church, one has to acknowledge the space where you’re installing and the reverence that goes with that space. I think my piece speaks to that reverence in that it addresses the theme of nurturance and taking care of the land."

Hockenbery says the theme of nurturing in the mural also relates to the agriculture tradition in the North Fork Valley.

“Another thing that was important to me about this that I shared with Chip in our original writing was that I’ve heard people through the years say they wish that there was art that referred to the Utes that lived here," Hockenbery says. "Although this young woman is not a Ute, to me it was referring to the first inhabitants.”

Thomas has installed photo murals across the United States. The artist says that when he puts up a mural in a location he generally tries to use an image from that area.

“I do like the idea that the image in Hotchkiss is of a Native American girl," Thomas says. "Hopefully it will sensitize people in some degree to issues happening with native populations in the Southwest.”

In Hockenbery’s opinion, the mural showcases the artist's mastery of the "zone system," a photographic technique for determining optimal film exposure and development developed by American photographer Ansel Adams.

"From the darkest shadows to the brightest lights you have detail and you don’t have blocky places like a big white burnout," Hockenbery says. "You can read information in every tonal range, that’s the zone system. When you look at this mural even in the shadows you can see little details of what was on the ground there."

The mural is made of thin paper and preserved with acrylic. As such, the image is temporary and might last for two years, depending on wear and tear from the elements.

"We have to love her while she's here," Hockenbery says.