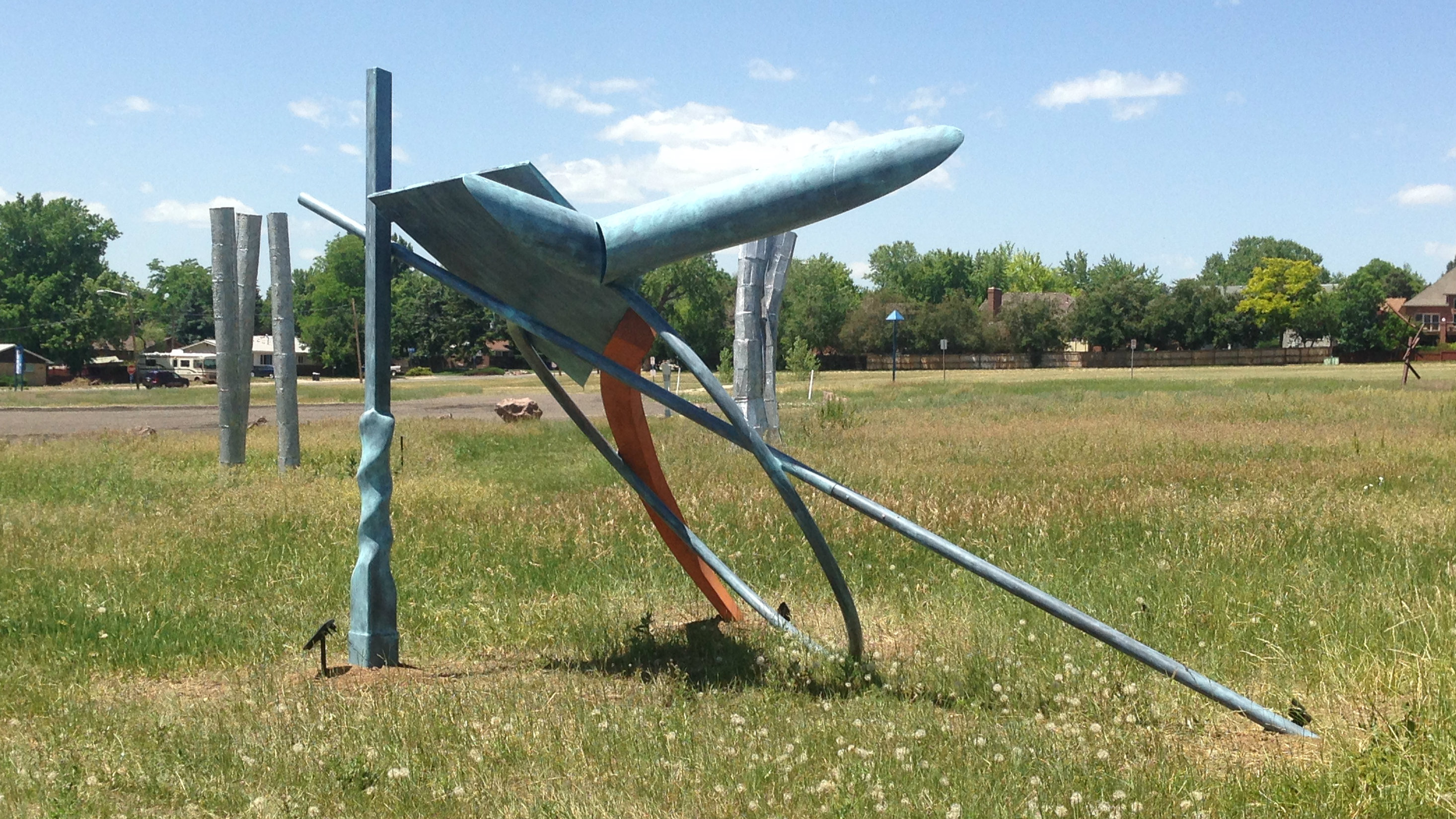 (Photo: Courtesy of Andrea Wulf)Nearly 17 acres of open space stretches south of the Arvada Center for the Arts and Humanities.

Now, for the first time in the center’s 38 years of existence, visitors can view artwork on display in the field as part of the “Unbound: Sculpture in the Field” exhibition, which runs through September 2015.

“Everyone from developers to the city had a different idea of what to do with the space because it’s a very large, open parcel of land, which is hard to come by,” Exhibition Coordinator Kristin Bueb says. “Before someone could utter phrases like ‘let's build a hotel,’ we said we have to claim it as an art space. And a lot of people got behind that.”

CPR caught up with Bueb to find out more about the exhibition, which is a part of a series that includes three additional gallery exhibitions inside the Arvada Center.

CPR: What prompted the Arvada Center to host an outdoor exhibition?

Kristin Bueb: The field was just sitting empty for as long as the Center has been here. It’s been used for overflow parking and things like that. There have been multiple master plans done through the city over the years, and there was always talk of some sculpture park happening on grounds. And we thought: Why not do it now? So we started just over a year ago. Right now the City of Arvada is really interested in creating a cultural corridor, which means bringing more art into the city. We tried to think if there currently exists a devoted sculpture park in the metro area of Denver that showcases only modern and contemporary sculpture. We really couldn’t think of any aside from parks that have a few sculptures in them or in Loveland, which is still a drive.

CPR: Why work in partnership with the Museum of Outdoors Arts?

Kristin Bueb: They place art outdoors all the time. They’ve transformed a lot of different spaces in Englewood with sculptures. And they also know a lot of artists in the state whose work really shines outdoors. We pitched the idea, and they saw the potential and got behind it. We both have similar missions, and we also had this conversation about how we’re both kind of on the ends of the Denver metro area. And so it makes sense for us to partner on a similar endeavor and to present quality outdoor art that’s accessible to many people. We all came up with artists who would be a good fit together and paired it down to the group we invited to participate based on what would make the best exhibition.

Kristin Bueb: We were looking for Colorado artists. That was essentially our only qualification. We definitely tried to expand our horizons and find artists we hadn’t worked with before like Vanessa Clarke, who has been really active in the Loveland sculpture scene. There is a lot of variety. The artists are working in different media from stone and metal to wood and found objects. We chose the artists first, and when we approached them we made it clear the work would be out in a field for 15 months, which meant it had to withstand different elements. It can get pretty windy out there. The exhibition includes work by 15 artists, and a lot of them did two sculptures – and older and a newer piece. They all ended up being pretty vertical and really tall. Dave Mazza’s new piece is 24 feet high. It works out in that field because it’s so open. It really draws you in and makes you want to get closer. And once you do, you experience the scale of the pieces.

CPR: Why did you title the series “Unbound”?

Kristin Bueb: We considered what to do in the field, and we had no constraints. There were no boundaries to what we were doing, and that informed the exhibitions inside the Arvada Center. It’s all about the idea of the environment of art and what art can do to an environment.

CPR: Tell us more about the exhibitions featured inside the Arvada Center as part of the series.

Kristin Bueb: In the main gallery we have “Unbound: Five Installations.” We invited five artists and separated the space to create mini galleries. They were not bound by anything other than the size of space. “Unbound: Digital Creations” is in the upstairs gallery. Four artists created entirely digital works. So they are environments that only exist in the artists’ heads and on a computer. There’s nothing totally physical about these pieces except for the screen they're projected on or the paper the digital files are printed on. “Unbound: Altered Environments” is in the theater gallery. We found photographers and video artists that capture real places you could stumble upon anywhere, but that have been manipulated somehow to convey how easily an environment can be changed.

“Unbound: Sculpture in the Field” runs at the Arvada Center for the Arts and Humanities through September 2015.