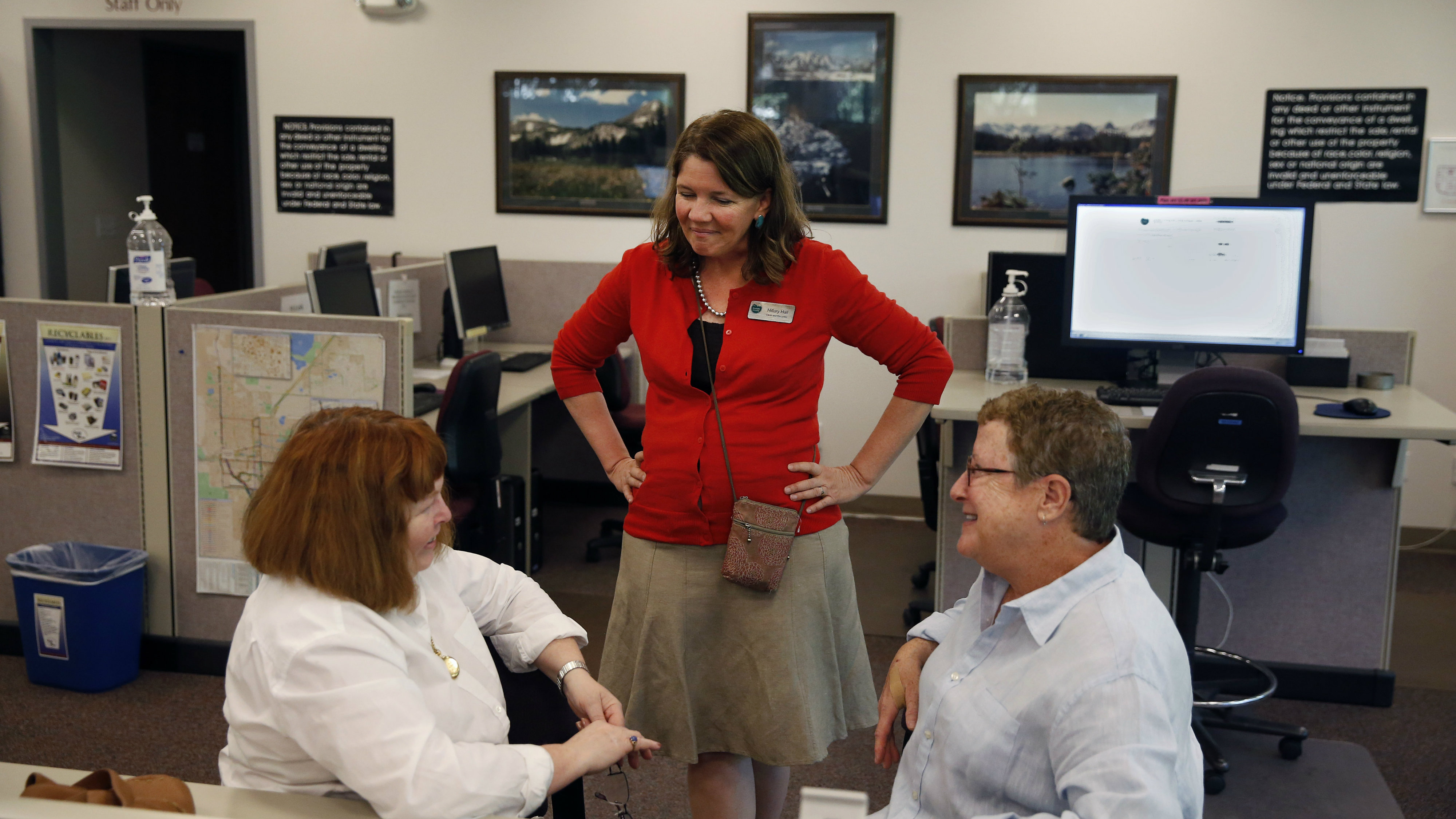 Colorado's Republican attorney general is following through with his threat to sue the Boulder County clerk for issuing same-sex marriage licenses.

“Regretfully, our office was forced to take action against Boulder County Clerk Hillary Hall due to her refusal to follow state law,” Attorney General John Suthers said in a statement. “While we would prefer not to sue a government official, Ms. Hall’s actions are creating a legal limbo for both the state and the couples whose relationships she wants to champion. That limbo could have tangible and unintended consequences.”

Hall has handed out marriage licenses to more than 100 same-sex couples since the 10th Circuit Court of Appeals released its ruling last week striking down Utah's gay marriage ban. While the judges stayed their decision pending appeal, Hall said she can't ignore the growing legal consensus. In addition to the Utah ruling, gay marriage bans have been found unconstitutional 21 other times in the past year.

"I believe it is a waste of resources for the attorney general to keep denying people their constitutional right," Hall said in a statement on Thursday. “But that is his prerogative until there is a Supreme Court case squarely addressing the issue. The question now is what public officials like me should do in the meantime.  I think the least harmful and most sensible solution is to issue marriage licenses and avoid the potential of more civil rights violations while this plays out in court.  I hope the court will agree with me.”

A hearing on the state's motion to halt the Boulder marriages is scheduled for Wednesday, July 9.

The attorney general's action against Hall is only latest twist in the increasingly complex fight over gay marriage in Colorado.

As of this week, Colorado's gay marriage ban now faces two legal challenges: an ongoing state lawsuit and a new complaint in federal court. An Adams County Judge is currently deliberating on the state case while the federal lawsuit was filed Tuesday by six new plaintiffs.

The attorney general's office filed identical motions in both cases late Wednesday acknowledging that if the Appeals Court decision is upheld, it would spell the end to Colorado's ban. The motion also asks the judges to delay any action in either case until the U.S. Supreme Court settles the question. Suthers describes the move as a "ceasefire."

Mari Newman, the lead attorney in the federal complaint, hailed the state's motion as a de facto acknowledgement that Colorado's ban is unconstitutional. Newman also says she would fight any effort to delay the case.

"There is no legally or factually compelling reason why the Colorado clerk and recorders offices all across the state should not issue same-sex marriage licenses," Newman says.

A 'carnival of civil procedures'

For attorneys in the lawsuit filed in the state court system, the past week has been a frustrating one. A ruling in that case is expected at any time from Adams County Judge C. Scott Crabtree. That was until the Attorney General filed a new motion Wednesday.

"What we seek is a nice, clean opinion by a district court judge that overturns the bans on same sex marriage," says Tom Russell, an attorney for the plaintiffs. "We believe we can take that directly to the state Supreme Court and as quickly as possible get a resolution to the issue from an authoritative source. So that’s our goal and has been our goal all along to do that with the least amount of fanfare. And hopefully the distractions both from federal court and in Boulder will not slow us down from getting that goal."

Russell describes the current situation as a “carnival of civil procedure” as more players jump in to challenge Colorado’s gay marriage ban.

"It's a crowded field," Russel says. “And the jostling is at times a little bit unfortunate."

Any further developments on the issue are on hold as government offices close for the long holiday weekend. But the issue is likely to be front-and-center when they open again next week.