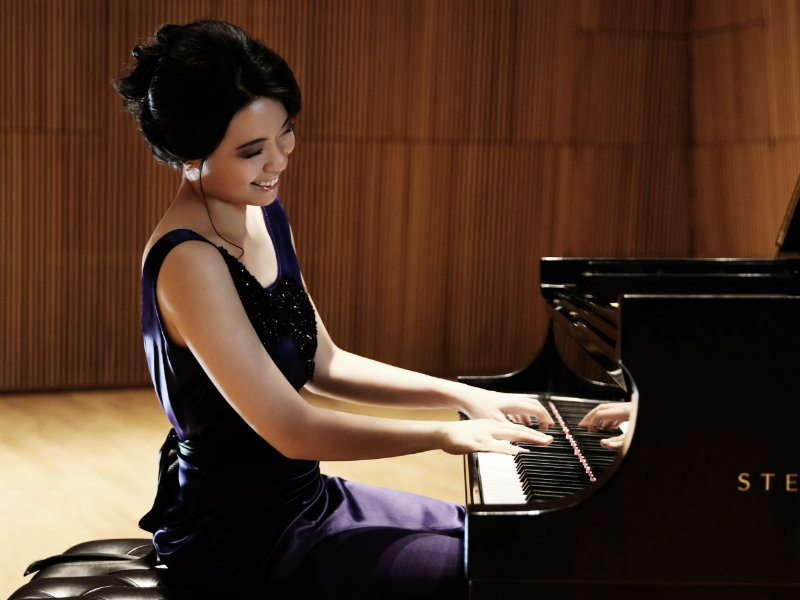 (Photo: KT Kim)The life of a busy, successful, globetrotting pianist is not one many of us know.

It sounds glamorous: A closet full of beautiful gowns or tuxes, upscale hotels, being the star on stage every time you play.

And all of that is real. But so is bad airport food, missed flights, lost luggage, and a home you rarely see.

Pianist Joyce Yang became an overnight sensation at 19 when she was the youngest-ever finalist at the Van Cliburn Piano Competition in 2005.  That achievement changed her life overnight.

“I don’t know where I would be without the Cliburn exposure at 19 years old,” Yang told CPR Classical. (Click the audio above for the full interview.) “If I had known what was about to hit I wouldn’t have performed the way I did at the competition. I think I would have been on eggshells if I knew what a big deal that turned out to be.”

In the ensuing eight years, Yang has traveled to over 500 cities to perform with nearly every major orchestra.

One of her favorite times of the year, though, is summer, when she performs at summer music festivals like Bravo! Vail, where she’ll play Rachmaninoff’s First Piano Concerto with the New York Philharmonic on Friday night, and the Aspen Music Festival and School, where she’ll play a recital Saturday with Pablo Sainz Villegas. And at many of the festivals where she studied years ago, she now acts as a mentor to younger musicians.

“It’s so weird because I used to be always the youngest one at the music camp -- always with my mom because I couldn’t get into the dorm as an underaged (student).  And then suddenly the students are calling me ma’am. So it’s a big difference but it’s really fun!”

Being able to see fun is critical for Yang in what otherwise must be a grueling life of travel, hours spent alone each day practicing, learning new repertoire (Yang says it takes generally 600 hours of practice before she’s ready to play a newly learned concerto in front of an audience.) and the pressure of being the star every time you’re on stage.

“I think every strange thing has occurred to me in the last nine years -- hundreds of missed flights and delays and almost not making it to the concert in time, and not sleeping for 40 hours ... and then having to perform the most important gig of your life. (With) that kind of schedule you become tough.”

Tough and grounded in music’s most important mission: to communicate from one heart to another. She says there could be multiple mishaps leading up to a concert – from a missed flight to the piano not functioning properly – but none of that matters once the audience arrives.  They come to be moved by the music and that need always comes first.

“That was something Van Cliburn shared with me before he passed away. He said, “You have to deliver the gift. Because you have it. It’s that profound love you have … that obsession you have over the music … and it’s a lot more powerful than you think it is’.”