Skip to Content
Need help?
Donate
Colorado was the first state to legalize recreational marijuana.  Now, the state is launching another first-of-its-kind effort: a $2 million public health awareness project stressing the unknown health effects of legal recreational marijuana on teens.
The company that won the marijuana ad campaign contract makes its home in a renovated old auto parts shop in Denver.  It’s in this office space with lots of glass, metal and exposed wood, that the creative team from Sukle Advertising and Design has been gathering around the table pouring over ideas.
When asked if the team could be nicknamed Mad Men, as in the iconic TV show,  but like "marijuana ad men," agency president Mike Sukle says, with a laugh, “Marijuana ad men. I don’t know that we’ve ever thought of ourselves that way. But now I’m sure we will."
In the ad, with slightly ominous music playing, the camera circles in on a lone car in a dark parking lot. Copywriter Elliot Nordstrom describes the scene, saying “We see that the kids are smoking weed. They look like they’re having a pretty good time, but they’re also crammed into this small Toyota Corolla.”
Amid laughter and a haze of smoke, these words appear, superimposed on the screen: "Scientists at Duke University have discovered that marijuana permanently decreased the IQs of teens. Some dispute that study, but what if, years from now, you learn those scientists were right?”
Then the central slogan appears:  "Don't Be a Lab Rat."
Sukle's team developed the concept talking to everyone from medical professionals to skate park operators.  They also talked to dozens of teens, in groups, on the street, and at concerts.  “You know a lot of them talked about it like Chipotle," Sukle says.  "They see it as organic, natural. It’s good for you. It’s an herb it doesn’t hurt you. So they really didn’t see a risk in the substance."
Nordstrom says they wanted to avoid a rigid "Just Say No to Drugs" or "This is Your Brain on Drugs" message, and also familiar pot stereotypes.  “We didn’t want to poke fun at stoners or go for the kind of 'Cheech and Chong' or 'Dazed and Confused' kind of personification of what a marijuana user is like,” Nordstrom says.
The agency's account planner Dan Schultz says teens told them they didn’t want to be manipulated.  “The kids told us ‘We want to know the facts.  We don’t want anything sugar coated for us,'" says Schultz. 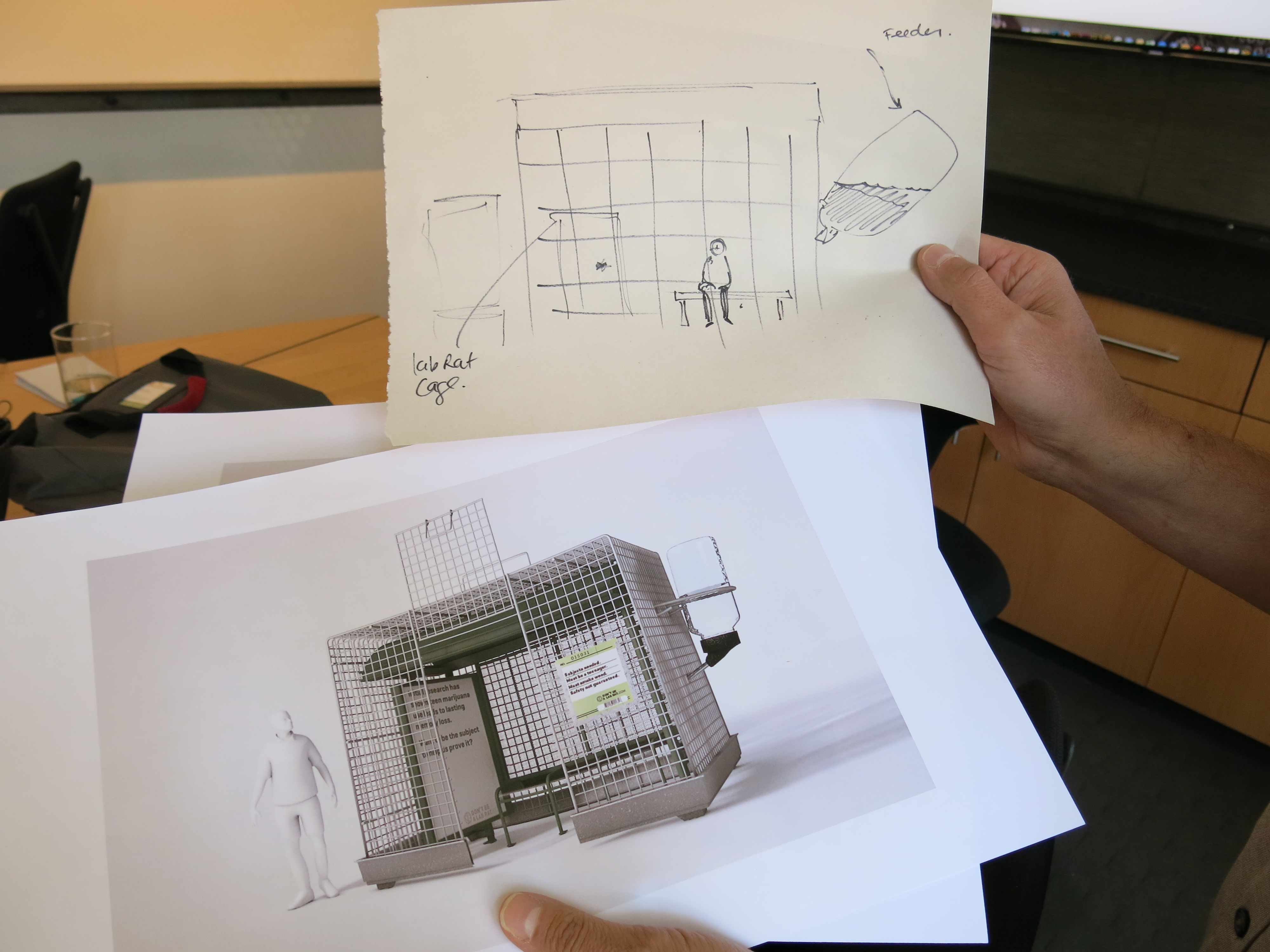 (Photo: CPR/John Daley)Mae Thompson was one of the teens the ad team talked to.  The 18-year-old from Westminster just graduated from high school.  She says young people get a lot of confusing messages about pot.  “I think the perception is definitely there that because it’s legal in the state of Colorado it must be fine,” says Thompson.
Seventeen-year-old Elijah Ullman, a high school senior from Superior, also met with members of the team.  He says many teens are unaware of, don’t care or don’t believe any scientific findings about pot.  “At my school at least, tobacco is more frowned upon than marijuana," says Ullman. "A lot of kids at my school think it’s not so bad or it’s not harmful.”
Early results from a new survey of Colorado students backs up that idea.  It finds the percentage who perceived a moderate or great risk from pot use dropped from 58-percent in 2011 to 54-percent last year.
Medical experts urged the ad team to emphasize research showing pot’s effect on developing brains, noting that it may take years until the data is conclusive.  Mike Sukle thinks the phrase “Don’t Be a Lab Rat” captures that notion.  It also sparked what he calls a “non-traditional tactic:” they plan to put up, around the state, huge human-sized lab rat cages, complete with large water dispensers and signage from existing scientific studies. 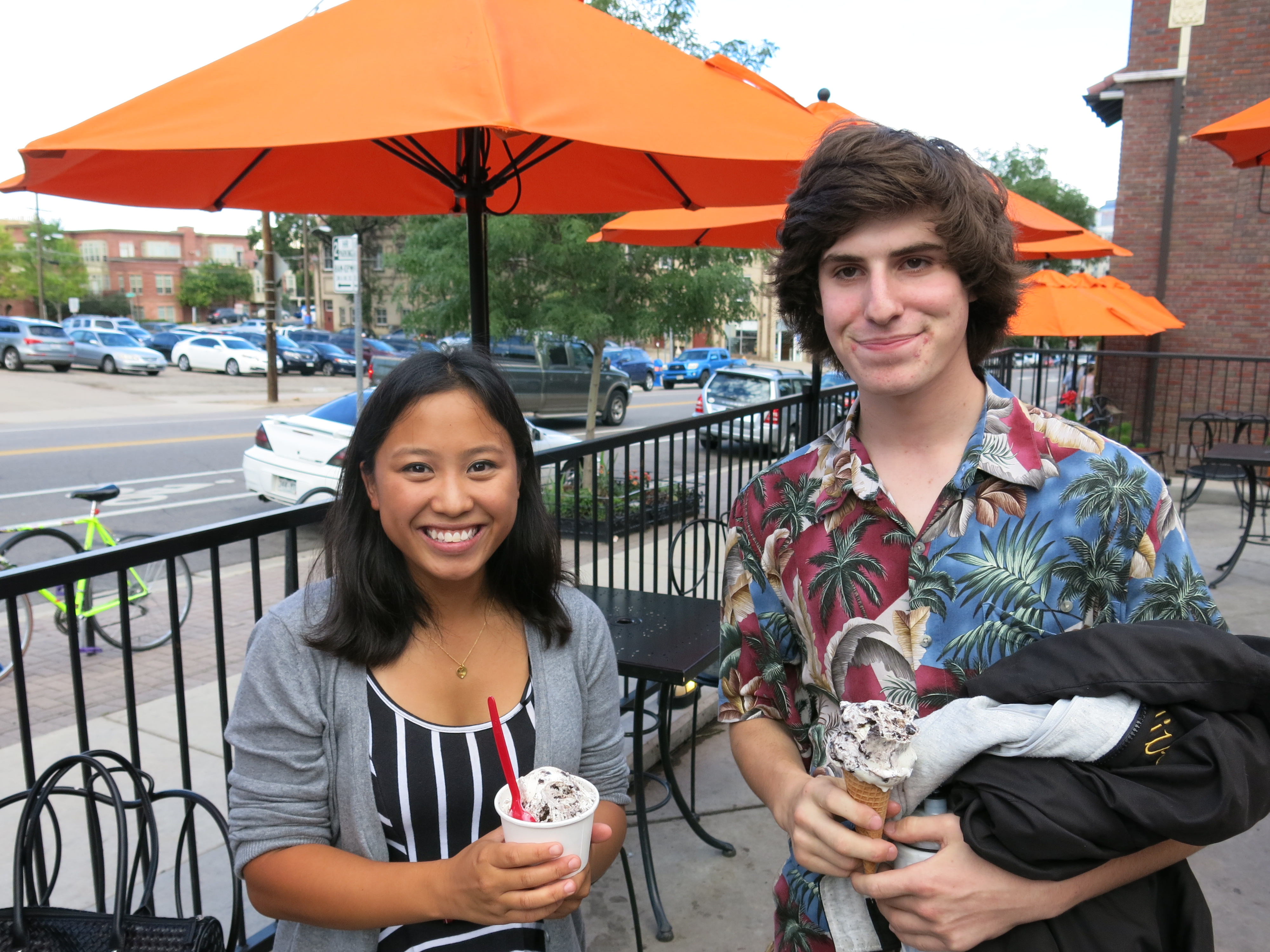 (Photo: CPR/John Daley)"They are about 8 feet wide by 12 feet long by 8 feet high," says Sukle, and will be placed in spots like a Denver skate park and the Denver Public Library.  "We don't believe anybody has put giant rat cages around a city before. So this will be the first," says Sukle, likening the displays to a cross between advertising and art.
"The lab rat cages came from the core premise of 'Don't Be a Lab Rat,'" says Sukle.  "The fact that the entire world is watching the youth population here to see if there are effects of marijuana on the brain."
Sukle art director Pedro Saldarriaga says their group took months to come up with the concept ulimately rejecting other contending concepts like "Weed make you dumb," "Just say 'maybe' later," and "It's called 'weed.'  It takes over."
Saldarriaga, showing the wall on which the team attached pages of scribbled ideas, describes the creative process as a marathon.  "It's long and you have to pace yourself, then not burnout, just because there's so many steps to it."
Harvard neuroscientist Dr. Staci Gruber thinks the general approach, focusing on teen pot use, is sound.  She says research shows teens are the most at risk.  “Your brain is still 'under construction' while you’re an adolescent,” says Gruber.
Those adolescents represent a growing number of pot consumers.  “Perception of risk and harm related to marijuana is literally at an all-time low, and continued use seems to be rising,” says Gruber.  "That's the sort of quandary that we find ourselves in as a nation." 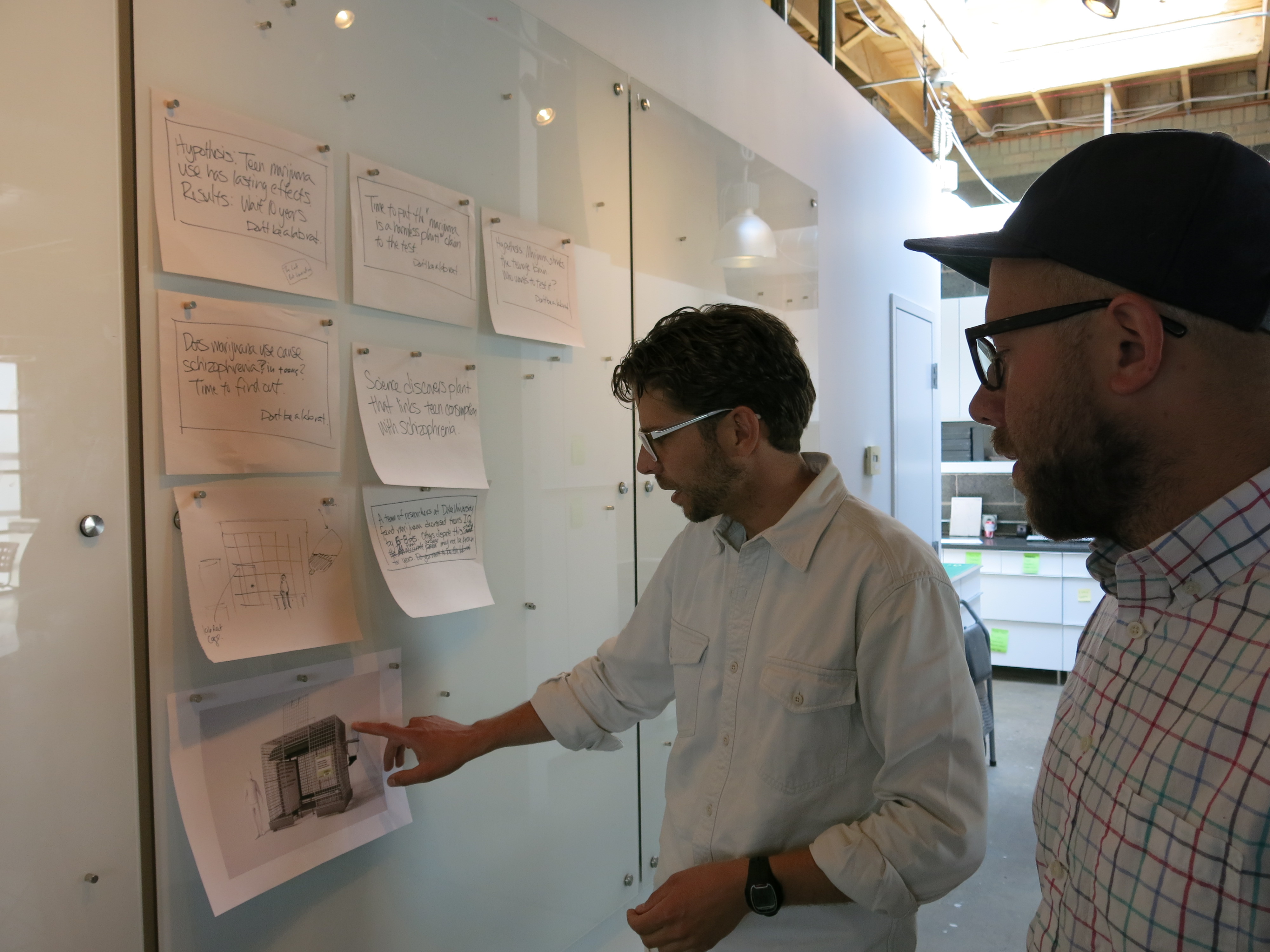 (Photo: CPR/John Daley)Colorado's marijuana industry largely backs the campaign, though some pot advocates are skeptical.  Mason Tvert, who is the director of communications with the Marijuana Policy Project, favors a more comprehensive approach that also addresses drinking.  "We shouldn’t simply be trying to steer people away from marijuana and ignoring alcohol and other dangerous substances," says Tvert.
Michael Elliot, Executive Director of the Marijuana Industry Group, says many prior public health campaigns targeting substance abuse have been seen as ineffective.  He worries the "Lab Rat" campaign could demonize pot, like the famous "Reefer Madness" anti-marijuana film from the 1930s.  "This is going to be a big test here about whether this messaging actually works, or whether it's just hysteria in a way, and it's going to be difficult to determine."
"I think we're neither promoting nor demonizing (pot), which is why we're focused on the research aspect and the lab rat aspect," says Colorado's Chief Medical Officer Dr. Larry Wolk, who helped advise the ad team about the science.
Ad team leader Mike Sukle admits the approach will get plenty of scrutiny.  Still, he thinks the nation’s first public health campaign regarding legal marijuana is ready for the spotlight.  “The national press is going to be watching this.  The world is going to be watching this.  It’s a daunting assignment.”
How it fares could set the stage for more campaigns, as other states consider legalizing pot.