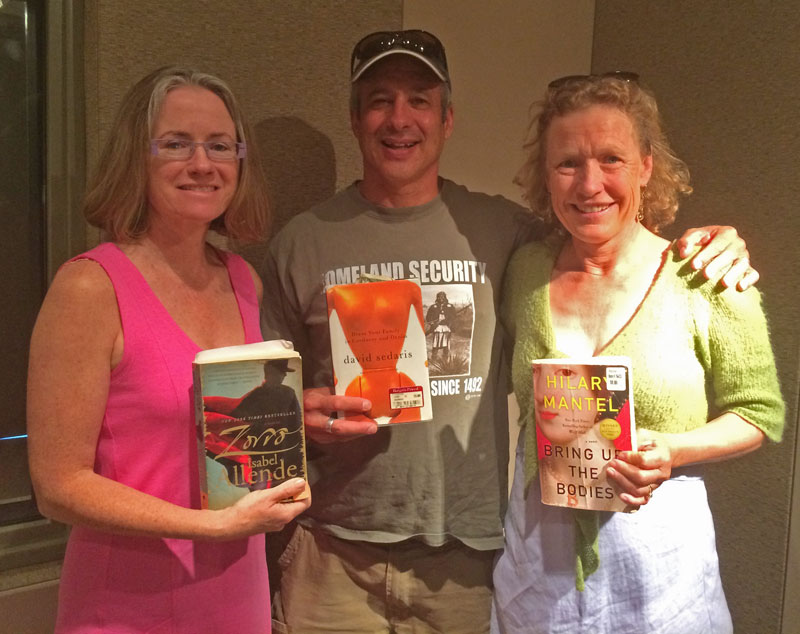 (Photo: CPR/Chloe Veltman)Drop an avid reader into the middle of their favorite book store or library, and chances are good they’ll discover a book that excites them.

But what if they’re forced to pick from just a few dozen titles?

When choosing books for this month’s Book Club segment, this challenge was handed to Colorado authors Lisa Jones, Peter Heller and Helen Thorpe. We sent each of them out into their neighborhood to find reading material at their closest Little Free Library -- book boxes that are popping up in front yards across the country.

Even with the pared down selection, our authors went home with books that inspired them.

In fact, the selection of books in a Little Free Library near Jones’ home in Boulder proved to be richer than expected.

“I opened the door, praying that there would be some good books in there, and there’s ‘Anna Karenina’ staring me in the face,” Jones says.

But in the end, she took home “Bring Up the Bodies,” a Man Booker Prize-winning historical novel by Hilary Mantel that takes place in King Henry VIII’s England.

“I was just charmed by the scenes," Jones says. "It’s so unhurried and specific. It just plops you in there. It was a great book. I do recommend it.”

Thorpe’s trip to a Little Free Library ended with her discovering a book by one of her favorite authors.

“I picked “Zorro” by Isabel Allende because her writing has always carried me to new heights," Thorpe says. "I think she’s amazing. And I didn’t know she wrote a book called ‘Zorro,’ which is the Zorro legend retold by her.”

Heller took the opportunity to read “Dress Your Family in Corduroy and Denim” by David Sedaris, an author he was familiar with, but had never read.

“What I found here was that he’s a very touching, incisive writer about family, and about love, and about all sorts of hypocrisies in society,” Heller says. “I thought some of it was actually brilliant and beautiful.”

Lisa Jones is the author of the memoir “Broken: A Love Story”. Peter Heller’s latest novel, "The Painter," is just out, and he’s also the author of the best-selling novel "The Dog Stars."  Helen Thorpe’s non-fiction books include “Just Like Us: The True Story of Four Mexican Girls Coming of Age in America,” and “Soldier Girls,” which was released earlier this month.