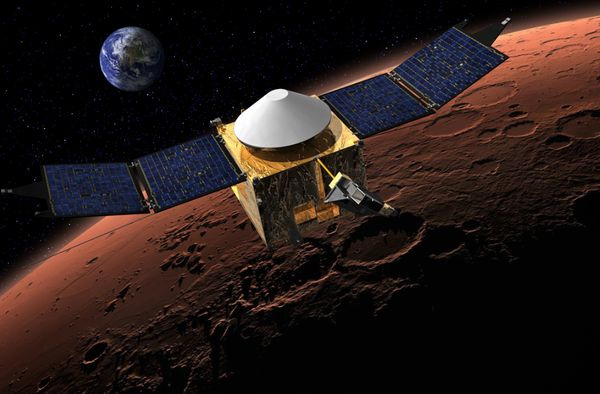 "I think my heart's about ready to start again," MAVEN's chief investigator, Bruce Jakosky of the University of Colorado, said early Monday. "All I can say at this point is, 'We're in orbit at Mars, guys!' "

Its flight operations are controlled from a Lockheed Martin facility in Littleton.

Lockheed described in a statement how the craft prepared for orbit:

Earlier in the week, final commands were sent to the spacecraft to ready it for orbit insertion. At 7:50 p.m. MDT today [Sunday], those commands fired the six main engines for a 33-minute burn that slowed the spacecraft by 2,752 mph. This allowed it to be captured by Mars’ gravity and placed into an elliptical polar orbit around the planet that is initially 35 hours long.

The spacecraft was built to discover more about the Martian atmosphere, NASA explains in this video:

Mars used to have a magnetic field that protected it from solar wind. But after it dissapeared, scientists theorize, the solar wind stripped the atmosphere and dried out the planet.

An instrument on MAVEN, NASA says, will "play a key role in studying the planet's atmosphere and interactions with solar wind, helping answer the question of why a planet once thought to have an abundance of liquid water became a frozen desert."

The primary mission, set to begin in November, will last for about a year.