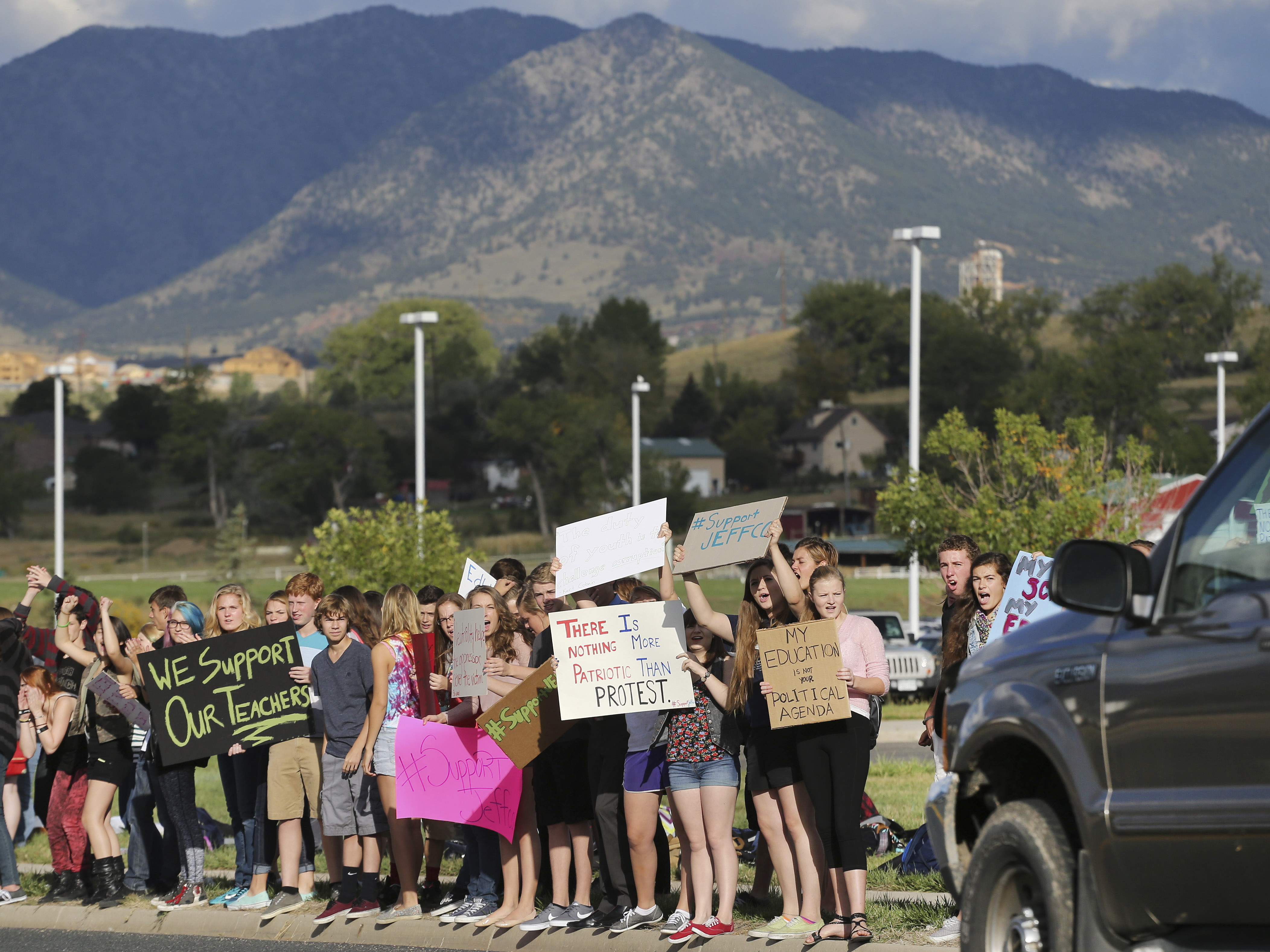 (AP Photo/Brennan Linsley)Students in Jefferson County, the state's second-largest school district, are protesting again Wednesday. They're upset about proposed changes to the history curriculum by new board member Julie Williams.

But what exactly is Williams proposing, and where did it come from? Here are some key points about this ongoing issue.

What's in the proposal?

Williams' proposal, discussed at a board meeting last week, would set up a committee to review curriculum. The committee's initial job would be to review curriculum used in Advanced Placement U.S. History classes and elementary health. The controversial piece of the proposal appears in Williams' first draft:

However, a subsequent draft from fellow school board member John Newkirk removed the most controversial sections of the proposal. That draft was not formally introduced but Newkirk says Williams accepted those changes. But CPR News has not been able to confirm that with Williams. The resolution was tabled at the end of last week's meeting.

Why is there so much talk now about AP History?

The controversy stems from the recent overhaul of the AP test.  Students who take AP classes can earn college credit. The exam is administered by the New Jersey-based College Board. For years, the College Board has been working to de-emphasize rote memorization of facts in AP history, and instead develop historical thinking and critical analysis skills. One historian calls it “teaching historical thinking instead of historical trivia.” The idea is to teach students how to read sources, how to use the skills of a historian, and how to create their own historical arguments. Many Colorado history teachers are already teaching in this style.
This shift led to a new “framework” or guiding set of principles and content for what is on the history exam. Here's an example of a change in how history is taught:
Previously, on a multiple choice question, students would be asked: Which of the following documents was related to George Washington? A) the emancipation proclamation b) the Treaty of Versailles c) the Treaty of Guadalupe Hidalgo or d) the Farewell Address? In the new AP exam, students would be given an excerpt of the Farewell Address, the correct answer, and be asked to evaluate it and answer why it was important to Washington’s time.
More coverage:
The new framework also includes more early modern American history, which places more emphasis on slavery, and recent American history, which includes more on the treatment of Native Americans and racism.
Conservative opponents say certain figures in American history are left out in the new framework and argue what is taught is too negative. They also say there is too much content about women, slavery, and Native Americans.
Proponents argue that while every founding father may not be named, it’s impossible for a teacher to discuss the Revolutionary War without naming Thomas Jefferson or George Washington. They argue the new framework is a broadening of American history.
The framework does not contradict the Colorado Academic Standards for social studies, adopted in 2009.

What do opponents say about this proposed change to teaching AP history?

Students see the proposed resolution as censorship. They say school should be about learning to be free thinkers, and how to critically analyze the material in front of them. They note many historic figures practiced civil disobedience and acts of rebellions. Teachers are upset there’s an assumption they’re leading kids astray.

The resolution’s sponsor Williams said at last week's board meeting that her intentions are being misinterpreted. She says she’s not trying to eliminate the facts of U.S. history but shares the concerns conservatives nationally have outlined – that A.P. History casts some parts of history in a negative light, such as the bombing of Hiroshima and places too much emphasis on slavery and women’s rights. Williams has said the district should be molding good citizens, not "rebels."

How has Jefferson County's school board changed?

Last November, three new board members were elected - Williams, Ken Witt, and John Newkirk. The three formed a new conservative majority on the five-member board, which immediately triggered anxiety among teachers and parents about the new direction the board might take. During the election campaign, the three new members talked about supporting school choice and opposing a ballot measure that would raise money for schools.

Since the election, the board has been at odds with the Jefferson County Education Association, the teacher’s union over a new pay scale that places a great focus on performance, more money for charter schools, and expanding funding for kindergarten students. Board members have stated they want to ensure community voices are “heard, valued, and respected.”  But parents and teachers say they feel shut out.

The school board could take up the issue again at its Oct. 2 meeting. The agenda will be set on Friday, and a district spokesperson "at this point there is no plan to have this discussion on October 2."