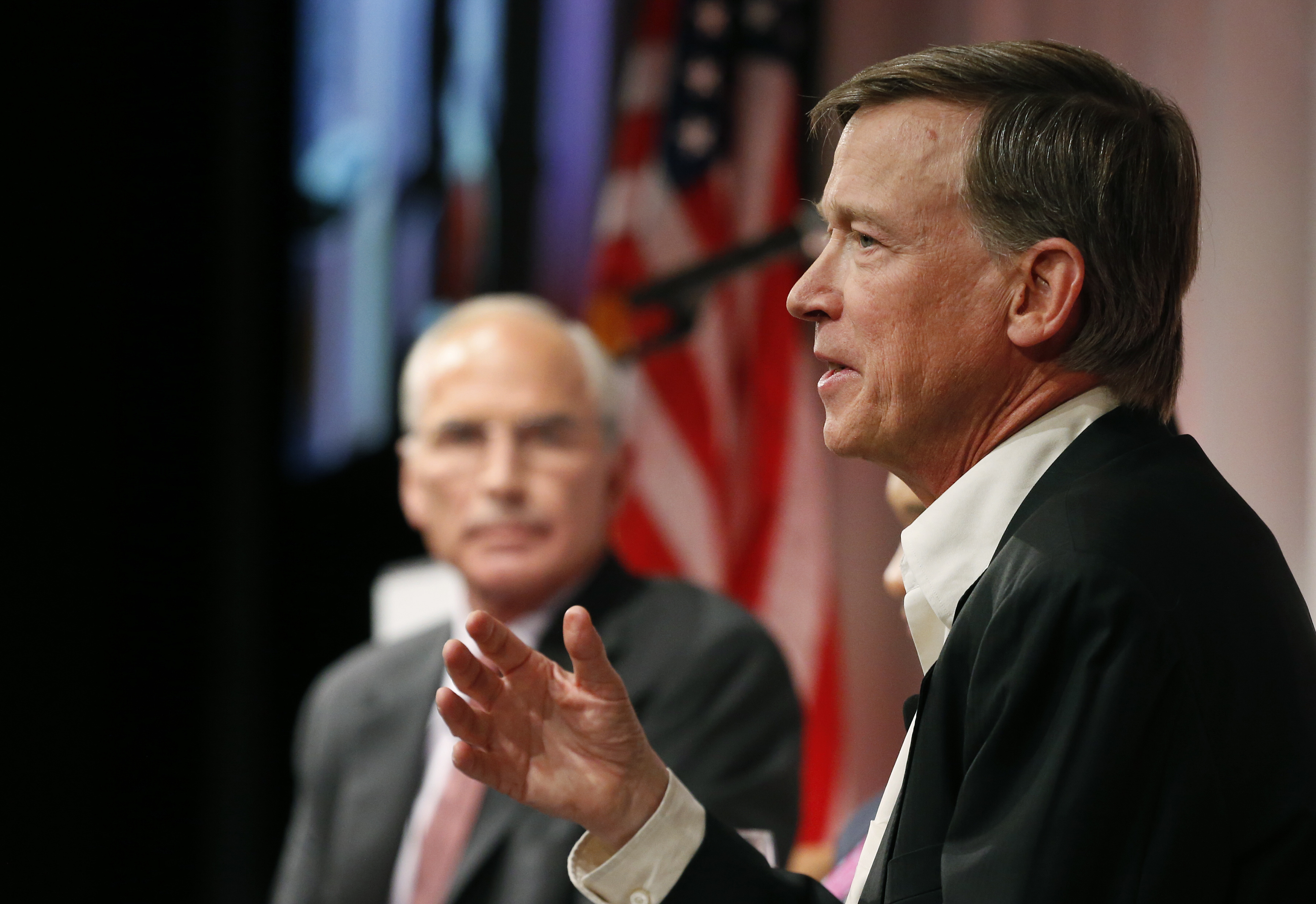 The two-time Denver mayor, former geologist and successful brewpub owner sailed into the governor's office four years ago over a divided Republican party that had nominated an unknown tea party favorite. With a self-deprecating sense of humor and an emphasis on bipartisanship, Hickenlooper got begrudging praise from some Republican state lawmakers for his first two years in office. But a controversial death-penalty decision, a package of gun-control bills, and mishaps explaining his choices have put a dent in Hickenlooper's aura of invincibility.

Now, several polls suggest he's in a close race against Republican Bob Beauprez, a former member of the U.S. House.

"I'm going to win. I'm going to work hard enough," Hickenlooper said in an Associated Press interview. "I mean, I spent 16 years in the restaurant business ... he's not going to outwork me. So, I am going to win, and this campaign is going to allow us to talk about the economy, and how are we going to create more jobs."

Still, Hickenlooper acknowledged the policies he and fellow Democrats ushered in since 2013 have made things harder.

Much of the firepower for Republicans has come from Hickenlooper's decision to grant an indefinite stay of execution last year to Nathan Dunlap, who was convicted for the 1993 slayings of four people at a Chuck E. Cheese restaurant in Aurora, a suburb just east of Denver. Hickenlooper's reprieve was not clemency, so he left the door open for a subsequent governor to execute Dunlap, leaving his fate unresolved.

"Since that moment ... he has to some extent been trying to play defense and recover," said Floyd Ciruli, an independent Colorado pollster.

Despite the criticism, Hickenlooper said he believes his decision was correct.

"I don't think government should be taking people's lives. I just don't," he said.

While Hickenlooper's popularity has waned, his Republican challenger has experienced a resurgence.

Once seen as a political laughingstock for losing the governor's race by 17 points in 2006, Beauprez has emerged as a solid contender for a Republican to win the state's top office for the first time since 2002.

"I don't want to sound overly casual about it, but the kind of geeky, aw shucks, nice guy veneer that the governor had, transitioned to (voters saying), 'What the heck is up with that?'" Beauprez said.

The buffalo rancher and former banker mostly disappeared from politics after his 2006 defeat. But he stayed on the radar enough through radio programs, a book he published and other writings. The work has provided ammunition for Democrats seeking to describe him as an ultra-conservative candidate who opposes abortion even in cases of rape, and who would threaten immigrant rights.

Beauprez, however, has said he would respect other's views on abortion if elected and generally has dismissed the attacks against him as irrelevant. He says voters are not thinking about those issues even if Democratic operatives are.

"They want to invent issues because they can't defend (Hickenlooper's) record," Beauprez said.

In the coming weeks, as the TV ad wars ramp up, Beauprez will also have to contend with Hickenlooper's vast fundraising advantage. The governor has raised nearly $4.6 million — four times more than Beauprez — and reserved about $2.4 million in television advertising leading up to Election Day.

Hickenlooper, who has famously disavowed any negative advertising, is instead flexing the muscles of incumbency. He's crisscrossing Colorado, congratulating residents of a ranching community called Brush on their dropping unemployment rate, which stood on a recent day at 4.3 percent in the county.

Later that same day in Wiggins, a nearby town, Hickenlooper attended the annual "Pedal The Plains" bike ride touring the state's agricultural communities. One of the riders there, Dwight Hill, 62, a retired commander from the Boulder County Sheriff's office, said he disagreed with Hickenlooper's death-penalty decision.

If he had to decide now, Hill said he would pick Hickenlooper over Beauprez. However, Hill said, he hasn't completely made up his mind.

"They're so close, that in the next two months, I think there's great potential for one of them, in my opinion, to shoot themselves in the foot," Hill said. "And then I will know, 'Yep, I'm going with this one, or I'm going with that one."