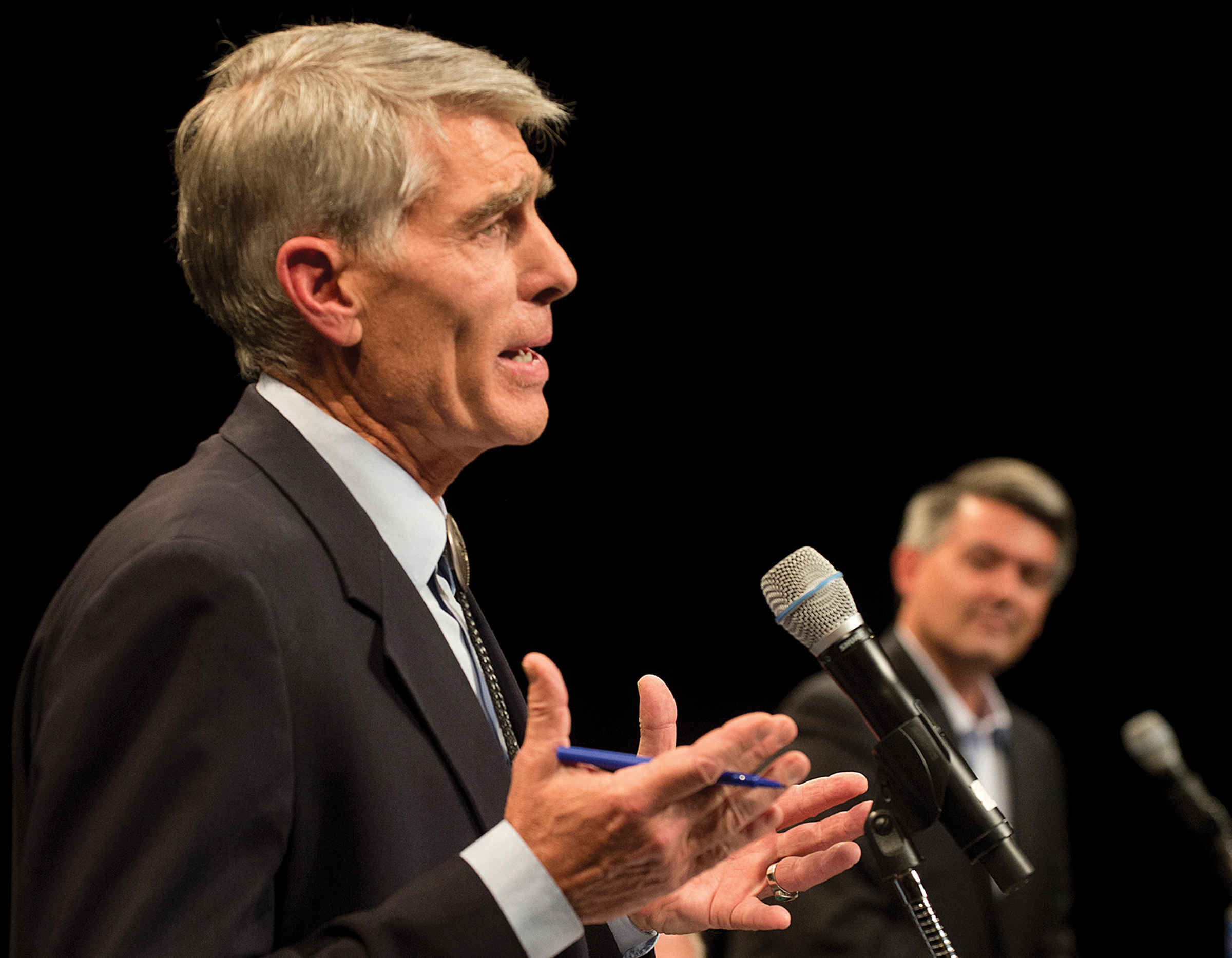 (AP Photo, Chris McLean/The Pueblo Chieftain)Sen. Mark Udall (D-Colo) and his Republican challenger, Rep. Cory Gardner, clashed in the most raucous debate yet of their neck-and-neck race Thursday night, arguing over which of them was too extreme to represent the state and angling for the slightest advantage days before mail-in ballots begin to arrive at voters' homes.

Control of the Senate could hinge on the outcome of the race, which has seen six months of bruising attack ads and remains deadlocked in public polls. The debate in Pueblo, a weathered steel town 114 miles south of Denver, was the candidates' third of the week but had a distinctly different feel because of a mix of local issues and a roaring crowd that was encouraged by the moderator to cheer for their candidate.

The two candidates argued over familiar issues of immigration, foreign policy and reproductive rights, as well as a new one, with Gardner proposing a ban on flights from countries afflicted with the Ebola outbreak. But one theme linked all their disagreements -- that the other was too extreme to represent a state evenly-divided between Democrats, Republicans and unaffiliated voters.

Udall countered by saying Gardner was ranked the 10th-most conservative member of the House of Representatives -- to the right of former Rep. Tom Tancredo, a notorious immigration firebrand. "Congressman, I'm 100 percent sure your policies are wrong for the state of Colorado," Udall responded. 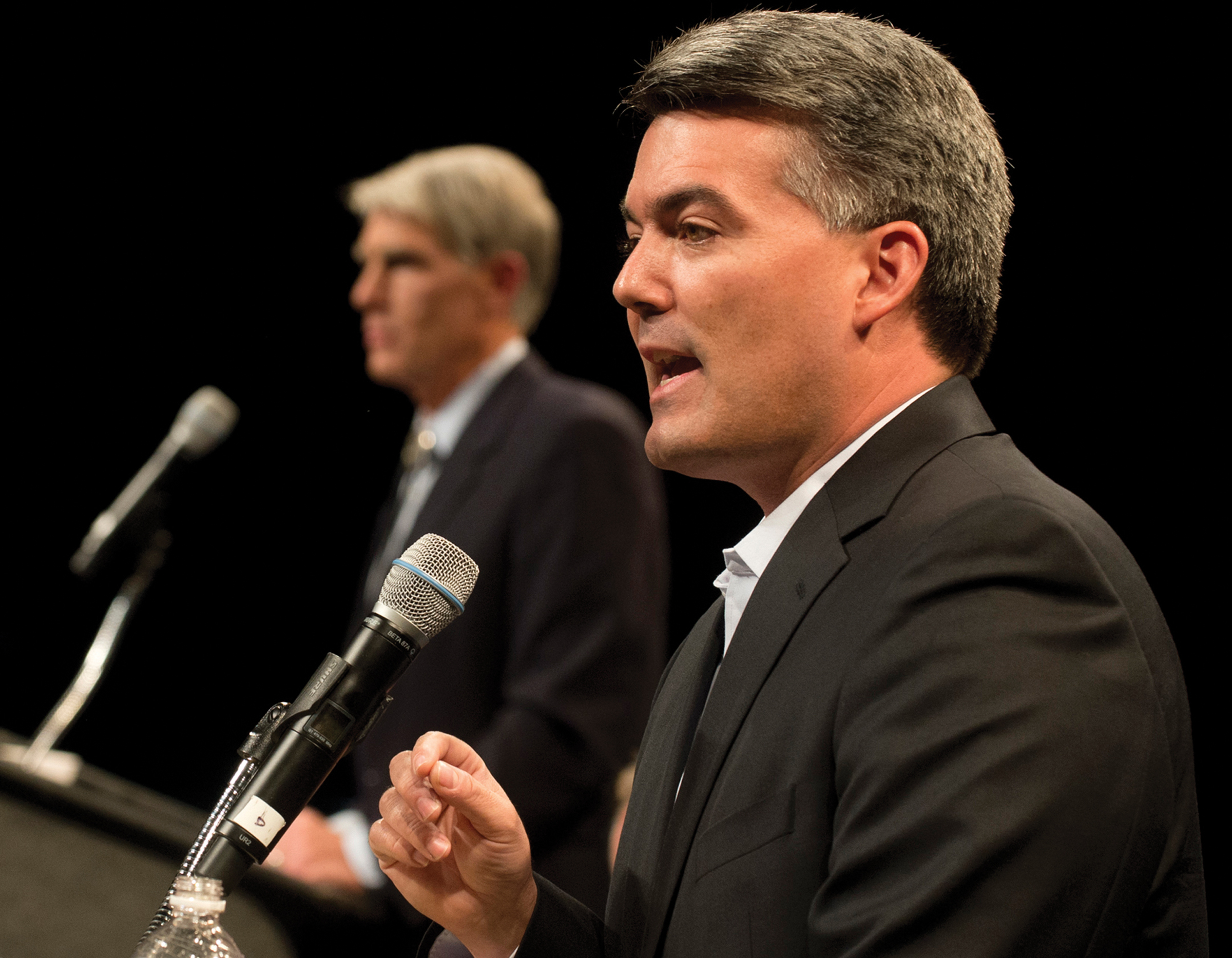 (AP Photo/The Pueblo Chieftain, Chris McLean)The crowd occasionally shouted down one of the candidates and often cheered lustily for their zingers, which flew fast and fierce. Gardner observed that "both Obama and Udall are five-letter words." Udall responded to one lengthy Gardner answer by saying: "Talk is not leadership."

On immigration, Udall criticized Gardner for not supporting citizenship for many of the 11 million people in the country illegally. Gardner countered that Udall had voted for a 2005 Republican bill that would make being an illegal immigrant a felony. Gardner criticized Udall for being a "single-issue" candidate for hammering him on reproductive rights. Udall contended Gardner had spent his career "trampling on women's rights." And though the two men both support President Obama's plan to roll back the Islamic State in Syria and Iraq, they argued over who had been too slow to respond to the threat.

On Ebola, Udall slammed Gardner for voting to cut $300 million from the budget of the Centers for Disease Control. "That's not how we protect our country," Udall said.

Gardner said the CDC was funding jazzercise classes and massage and called for "a ban on all flights" from the West African nations afflicted with the virus.

The two candidates will meet for a final debate next week, as Colorado's brand-new mail election system kicks into gear. Ballots go out on Oct. 14 and citizens have until Election Day to register and get them to polling places.

Republicans need to net six seats to win control of the Senate.