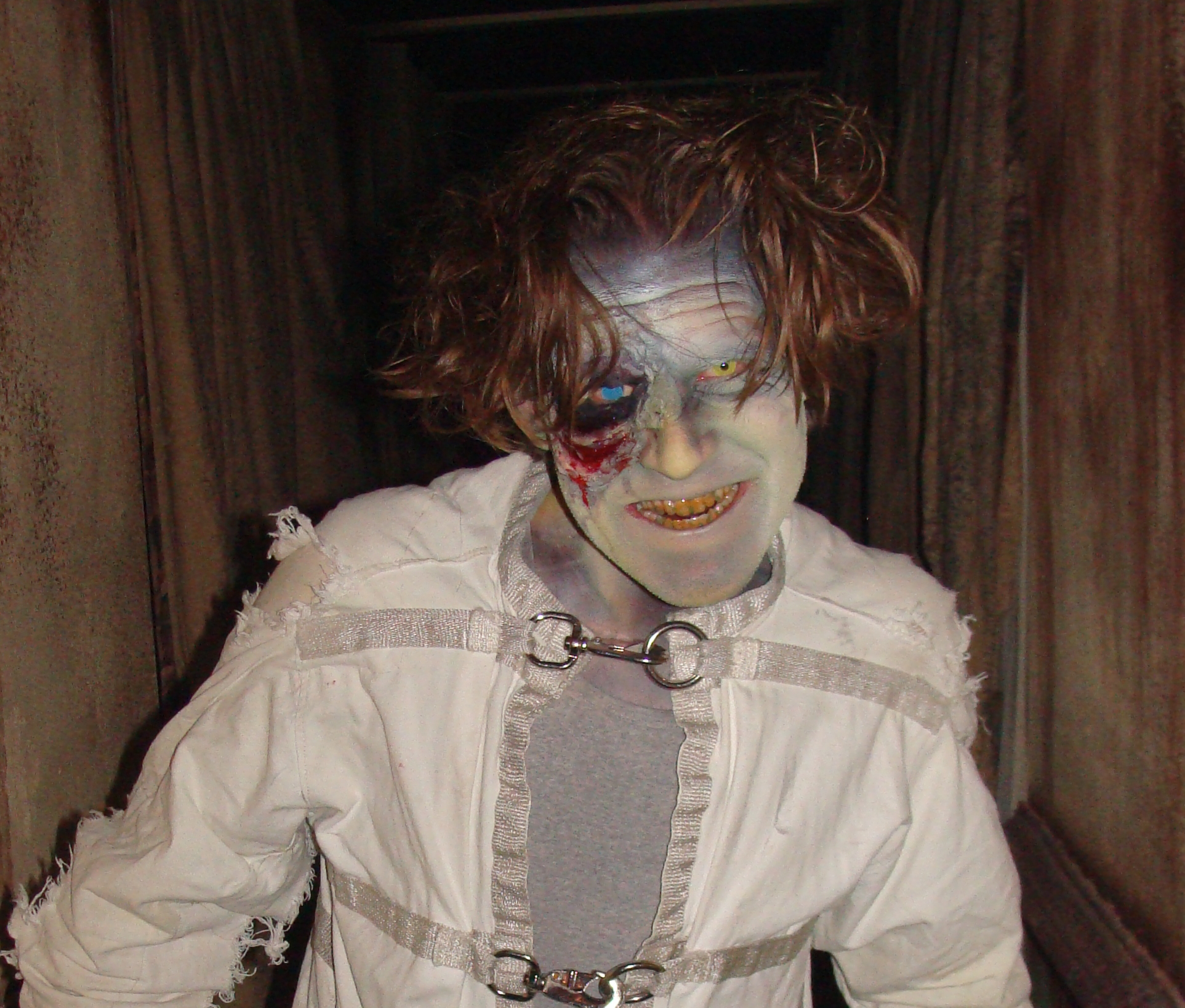 (Photo: CPR/Megan Verlee)Editor's Note: A slightly modified version of this story first appeared on CPR's website and on our airwaves in 2012.

But what really gets the audience jumping are the actors -- performers who often come back season after season to reprise their spooky roles.

In a paint-splattered dressing room, Jesse Buchholz is transforming himself for a night at The Asylum. The actor painstakingly applies a prosthetic latex wound over one eye before starting on his facepaint.

“You kind of go for the effect of maybe someone that hasn’t slept for a while, or someone that their skin has been rotting,” Buchholz says, spraying on coat after careful coat of airbrushed monster make-up in black, white, green. “It makes you look very intense.”

Buchholz rounds out his intense look with wildly ratted hair and a dangling straight-jacket. He got hooked on haunted house work after his first taste in high school, and has kept coming back every year since.

“I didn’t quite want to grow up; I wanted to make the trick-or-treating thing last,” Buchholz says, who’s now 33, with a wife, a toddler, and a regular, year-round job. “Unfortunately, people don’t really like to give you candy when you’re past 12 or 13 years old. They kind of look at you strange.” 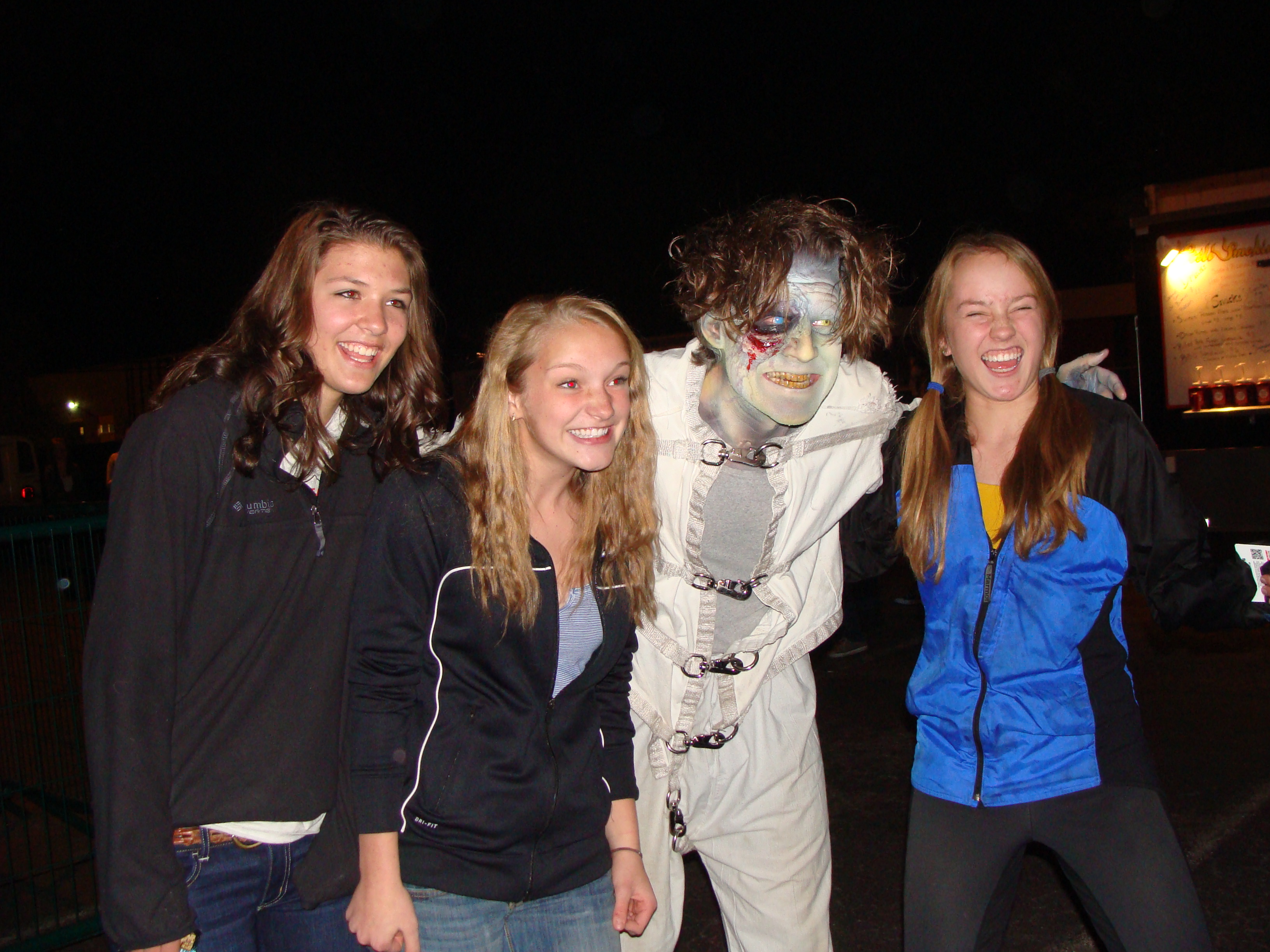 (Photo: CPR/Megan Verlee)In the hierarchy of haunted house actors, Buchholz is what’s called a “lot monster” -- part of the prowling, pre-show entertainment dispatched to warm up people waiting in line outside The Asylum. Teenage girls are his favorite targets. Buchholz says they are easy to spook and their high-pitched screams get the whole crowd worked up.

Asylum co-founder Warren Conard says a good scare does take good acting. Conard says performers hone their routines from night to night, working to time them so that guests move seamlessly from one chill to another as they navigate the attraction’s winding passageways.

A blood-spattered actress named Shannon lurks behind the reception desk at the entrance to The Asylum. She greets each arriving group with sniffs and screeches.

“Hi, checking in are we?” Shannon says, loopily. “Just proof of insurance and skin please. We accept all types of skin.”

In the haunted house industry, Shannon’s what’s called a "pop-out scare" -- the ghoulies whose sudden appearance in the dark gets guests to jump and scream in spite of themselves.

It can be a rough gig: The one big rule drilled into thrillseekers before they enter is 'don’t touch the actors.' But apparently that doesn’t keep some visitors from picking fights with the costumed undead.

The occasional contusion aside, working at Asylum is still the highlight of Buchholz’s year. He’s the guy who never fell out of love with the spooky possibilities of the season.

“When you used to go trick-or-treating it was from about 5pm until about 8pm and maybe even earlier, depending on your curfew,” Buchholz says. “So I’m extending that three hours into a whole month.”