A Frontier aircraft that came to Colorado after it carried a nurse diagnosed with Ebola is still out of service, an airline official said Wednesday.

On Tuesday, Ken Greene, senior vice president of operations at the Denver International Airport, said the plane was back in service. But Frontier spokesman Todd Lehmacher said Wednesday that Greene was incorrect.

"It's still out of service," Lehmacher says. "We're replacing several things, seat covers, carpets, and environmental filters. We've gone above and beyond what the CDC requested. The CDC has told us the aircraft is safe to go."

Last week, the aircraft stopped in Denver for cleaning after it carried the nurse between Cleveland and Dallas. She had treated a Liberian man who died from the virus in Dallas.

Crew members who flew on the aircraft have shown no symptoms of the sickness, Dr. Larry Wolk, the state’s top medical officer, said in a Tuesday press conference.

Greene told reporters that airlines have been told to separate sick passengers in flight as part of the increased safety measures from the U.S. Department of Homeland Security. If there’s a suspected case of Ebola on a flight, "the aircraft may be held in a location remote from the gate," said Greene.

The sick person would then be removed from the aircraft and transported to a local hospital, Greene explained. 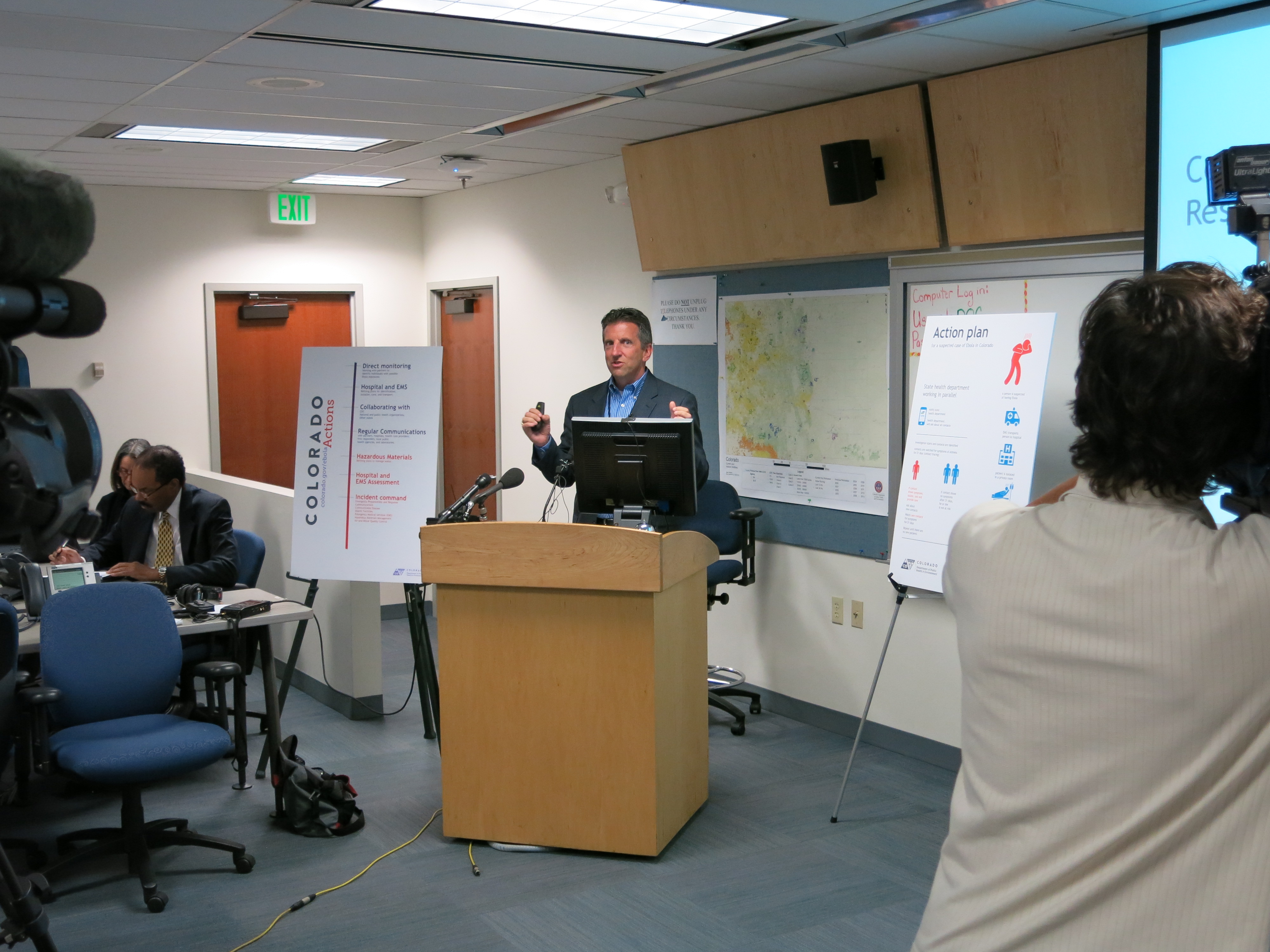 (Photo: CPR/John Daley)Additionally, travelers from the three West African countries most impacted by the Ebola virus will fly to one of five airports for enhanced screenings. Denver International Airport is not one of them, and has no direct flights to West Africa.

The airport is regularly practicing infectious disease safety drills and added signage warning about Ebola in August to its international arrival area.

To learn more about Ebola, Wolk urged the public to seek out credible sources of information, like the state's new Ebola website and hotline (1-877-462-2911).

"The general public has a lot of resources available to them," Wolk says.  He urged people to "really go to a trusted source for your information and not get drawn into speculation, rumor, bias, whatever."

To date, Colorado has no Ebola cases.

Wolk urged health providers to follow three steps when handling a suspected case of Ebola, summarized with the phrase
"Ask. Isolate. Call."
First responders and hospital staff should ask patients about symptoms consistent with Ebola virus, including fever, vomiting and diarrhea, and about travel to three West Africa nations impacted most severely: Sierra Leona, Liberia and Guinea. Wolk stressed the question needs to be asked all the time, "everyone, every time" he says.
If a patient is suspected of having Ebola, they should be isolated into a single room, with the door closed.  Hospital staff should wear at a minimum protective gear that includes gloves, gowns, masks and goggles.  Additional gloves, disposable shoe covers and leg coverings can be added. Visitors access should be restricted.
Wolk says all suspected cases of Ebola should be immediately reported to the Colorado Department of Public Health and Environment.  That would include people who have no symptoms of Ebola, but have exposure to it and would be considered at high or some risk.
Wolk says should a case arise, public health officials could take a variety of actions based on the risk of exposure and the symptoms a patient is displaying.
"I think the likelihood still remains very low," of an Ebola case arising in Colorado, says Wolk. "But having said that that doesn't give us an excuse not to be prepared."
Editor's Note: This story has been updated with new information from Frontier Airlines, which corrected a statement from DIA's Ken Greene.