The state scored an overall grade of C, the same grade as the nation. That ranking is the average of three separate indices: "Chance for Success," "K-12 Achievement," and "School Finance." Here's how Colorado performed in those categories.

This score factors in early foundations in learning, such as family income and parent education, math and reading skills during the school years, how many students go on to college, and annual income and employment.

But the state has one of the worst “poverty gaps” in the nation in terms of achievement. It ranks 45th in 8th-grade math, comparing scores of students who are eligible for free and reduced lunch to students who aren’t, and has the 41st-worst poverty gap for fourth graders in reading on national tests.

Though this index wasn't updated this year, it's an important part of each state's overall score. It examines reading and math performance on National Assessment of Educational Progress tests, high school graduation rates, and AP exams scores. 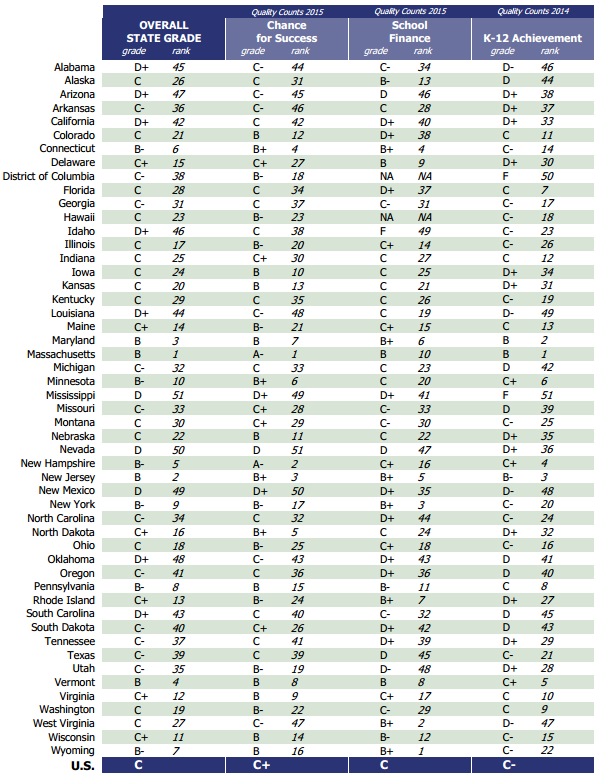 This year’s report also focuses on early-childhood education as its special theme.

Colorado earns a D and ranks 44th on the Early Education Index, which incorporates data from eight specific indicators. About half of three- and four-year-old kids are enrolled in preschool. That's about the same as the nationwide rate, but it 3 percent compared to 2008. The nation’s rate stayed flat.