State Sen. Linda Newell meets a lot of youth in foster care. One day one of them posted a message on her Facebook page.

“And [it] said, you’ve got to take a look into this,” recalls the Littleton Democrat.

"This" refers to the dismal figures, confirmed by a University Northern Colorado study last fall, on the number of foster youth graduating from high school.

“I was shocked,” said Newell. “I was so surprised that not only we dealing with a problem here but a severe problem, and if we don’t get a grasp on it, we are going to pay not only humanely, but also pay fiscally.”

Experts say education is their best chance of becoming independent, productive citizens. Statistics show if nothing is done, the lifetime costs to society for the 362 Colorado youth who aged out of foster care in 2013 will be about $108 million. Foster youth experience disproportionate rates of homelessness, unemployment, unplanned pregnancies, incarceration, human trafficking, and reliance on public assistance.

The UNC study gave clues as to what the main barriers are for youth trying to graduate from high school.

“Those barriers are often referred to as the three t's -- transitions, transportation, and transcripts,” said Judith Martinez, head of dropout prevention and engagement at the Colorado Department of Education.

Many foster youth are moved around constantly. The study shows the mobility rate for Colorado foster care students was 42 percent. That means 42 percent moved in or out of school during the academic year. That compares to 16 percent for all students.

Christie Chrittonden of Denver said from age 12 to 18, she was in more than 20 different placements and attended about four or five high schools.

Finding a way to get to school is a huge problem. Federal law requires that homeless children are guaranteed transportation to school, but counties are responsible for transporting foster youth and some say the law is vague.

Continually moving in and out of schools makes it hard to transfer credits and have a complete transcript to graduate. Chrittonden, who is now 23 and taking some classes at community college, said all the different high schools she went to awarded credits in different ways.

“I got behind in credits because one school gave me a ½ credit for all the classes I was taking, meanwhile another school I went to may have given me whole credits, so I had to make up a lot of work in credits,” she said.

Martinez said the transcript challenge also refers to the fact that many students with multiple challenges need remediation because they may not have taken courses that progressed in a linear way.

“Making sure students have the courses and classes that they need to be post-secondary ready and not in need of remediation is really important,” she said.

How to bridge the gap

Once out of high school, foster youth, at age 18, often with no money, no family and no financial support, face multiple barriers to post-secondary education. Fewer than 10 percent of foster youth nationwide earn a college degree.

About 300 youth age out of foster care each year in Colorado. Many land on the streets. A lucky 150 get help through Mile High United Way’s Bridging the Gap program.

“If you’re not worried about where you are going to stay the night, you can start to begin to focus on what are your goals around education and employment,” she said.

Being partnered with a life coach is also key to eliminating barriers to school. Castillo Cohen recalls a young man who had just started community college classes.

“Within about a week and a half he came to his coach in Bridging the Gap. And said ‘you know I don’t think I can do this,’” she said.

His coach started to dig into the reasons, thinking perhaps the classes were too hard.

“It comes down to his clothing, he doesn’t feel comfortable because he has a T-shirt and sweatpants, and he’s wearing it every single day and he’s feeling like people are looking at him and that diminishes his confidence,” she said.

Bridging the Gap bought him a gift card for clothing and the young man was back in school and finished his classes.

If a foster youth makes it onto a campus, they’re supposed to meet up with what are known as “single points of contact’ or SPOCs, established in 2009.

The model focuses on helping unaccompanied homeless youth, foster youth and other independent students transition into higher education. Other state strategies address some of the barriers these students as they progress into postsecondary education.

Dayna Scott, state coordinator for the Education of Homeless Children and Youth, said SPOCs volunteer to become a specialist in this area, to assist homeless and foster youth, “like placing youth in residence, so not back in a crisis when holidays come or waiving deposits for housing, or perhaps moving housing deposits until after aid comes in.”

Scott said it’s proven to be a good retention model for underserved and highly vulnerable populations, though the state doesn’t have statistics on how many of these youth graduate.

“Not all of the campuses have [coordinators], they’re all different, and they all have all volunteer staffers," she said. "We’re looking to find out 'how do we collaborate and have our efforts coordinated so they are more robust?' ” 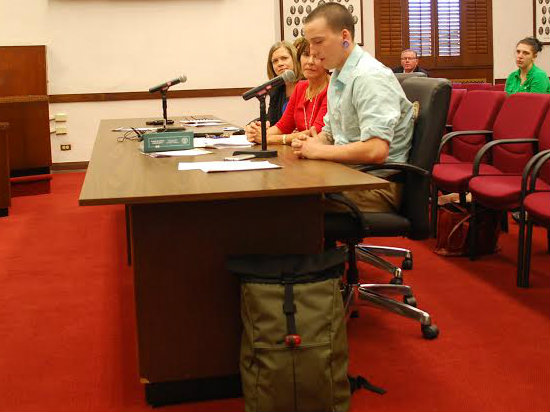 (Photo: Courtesy of Tess Downer)She also said she’s hearing from K-12 school officials who don’t know who in their student populations are foster youth. Many youth report no one in high school talking to them about higher educational opportunities.

Newell’s bill would set up a formal collaborative between higher education and county and child welfare officials. The idea is to create a coordinated support network to help foster youth onto campus or into job training.

She said it would bring Colorado more in line with other states – like Washington, Michigan, Texas, and North Carolina, which have all set up collaborative programs. If Colorado sets up a collaborative she argues, it could also free up some federal funds.

Before Wednesday’s hearing, it was unclear whether there was any opposition to the bill. Newell sees it as a first step to talking about some of the more significant supports other states have for foster youth.

About half of states have tuition waivers. Michigan has developed coaching guide for all colleges and has an easy-to-use web site that foster youth can access for support. Some states have policies requiring colleges to assist former foster youth. Alabama foster youth are eligible for $15,000 for more schooling. Missouri law requires that all foster youth – before exiting the system – must visit a state college. Other states have wrap-around support services that connect them to colleges.

Colorado State University’s Fostering Success program is one of the most comprehensive support programs in the state.  But even coordinators of that program see the gaps Newell sees in the whole system.

“The gap seems to be between high school and college, so if we can get something in place in there to guide these students and prepare them and start thinking about what the right questions are,” said CSU’s Jennie Baran.

Her colleague Erin Pitts said what’s needed is a way to coordinate all the players in a foster youth’s life – from grandparents and high school counselors to non-profits and caseworkers -- to help get the student from high school to college.

“It’s essential to students because they face so many different obstacles," Pitts said. “If we could have more of a pipeline, I think it would make it so much easier, not only for these students to have access to college, but to graduate from college which is the ultimate goal.”