Arturo Hernandez has been living in the basement of the First Unitarian Society of Denver's church since November of last year.

In the country illegally, he went into sanctuary after being told by U.S. Immigration and Customs Enforcement to leave Colorado and return to Mexico.

Defying deportation, the 42-year-old remains one of two people in the entire country still in sanctuary in a church today. But ICE could approve Hernandez’s request to stay in the country very soon, meaning he’d be able to return to his family in Thornton -- at least for now.

ICE declined to be interviewed for this story except to confirm Hernandez is being pursued for deportation.

Before entering sanctuary, Hernandez was living the American dream. He was a business owner who paid his taxes and helped his daughter with their homework. He settled in Thornton with his wife after arriving from Mexico in 1999.

"I’m no criminal," said Hernandez sitting in a cramped room in the basement of the church.

One wall is covered with drawings by his children as well as cards of support.  A few chairs, a bed, and a small dining room table fill the space. An unused exercise bike sits against a wall.

Hernandez said U.S. Immigration and Customs Enforcement became aware of his living in the country illegally in 2010 after an altercation and his subsequent arrest.

"It’s frustrating because all my normal life changed on that day. I’m here for one person that don’t say the truth," Hernandez said. "I don’t feel good thinking about that."

He claims it was a misunderstanding, and a jury cleared him of all charges. But the arrest triggered ICE to begin deportation proceedings.

Instead of leaving Colorado voluntarily and returning to Mexico, Hernandez turned to Jennifer Piper of the Metro Denver Sanctuary Coalition. She coordinated his move into the basement of the First Unitarian Society of Denver Church. 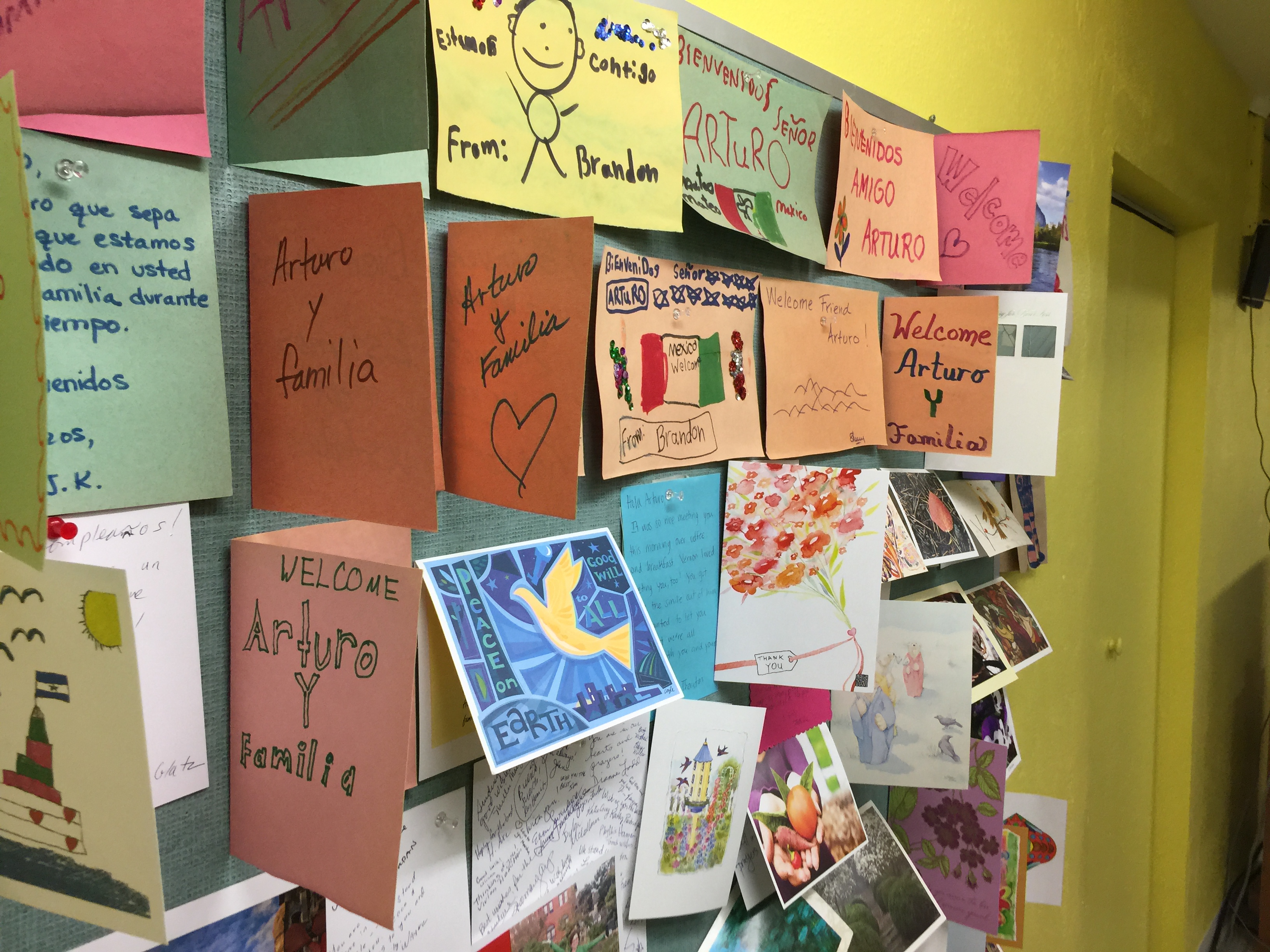 (Photo: CPR/Nathan Heffel)"The idea of sanctuary is for people of faith to really examine their values and how that applies to this [immigration] system and then help educate the rest of their faith communities and the larger citizen communities about the reality of this situation," said Piper.

Mike Morran, the senior minister at First Unitarian said the new sanctuary movement is taking hold not just in Colorado but across the country.

"Four or five months ago there were 10 people in sanctuary around the country. Today, there are two. And so this appears to be a fairly effective strategy," he said.

There were numerous meetings and discussions within Morran’s congregation on whether to allow Hernandez into their church. But in the end, 74 percent voted in favor of granting sanctuary.

Yet the congregation is housing a fugitive.

And just because Hernandez is in the church’s basement doesn't mean ICE agents will allow him to stay there indefinitely.

"It’s not a law, but they have a policy that [ICE] will not come onto the property of a church or a school to arrest someone unless it’s an issue of national security, which this clearly is not. So in some ways we’re counting on that policy," Morran said.

When President Obama announced sweeping changes to the country’s immigration system in November of last year, it included a program allowing qualified immigrant parents of U.S. born children to remain in the country.

Hernandez filed a request with ICE to stay his deportation in hopes of taking part in the program. His nine-year-old daughter Andrea is a U.S. citizen.

But Hans Meyer, a Denver immigration attorney, said those reforms are currently embroiled in a court battle in Texas.

"One of the difficulties is we have a very clear intention to change policy and what also appears to be a very clear fact that Arturo and other people would be eligible for that change," Mayer said. "Right now we don’t have clarity in the law. And that’s fair enough. But those people shouldn’t benefit nor should they be prejudiced by the fact that there hasn’t been clarity."

If ICE approves Hernandez’s stay of removal, he could be out of sanctuary soon. But Meyer said he'll still be in "immigration purgatory" even if Obama’s programs are approved.

"This is not a ticket to ride. This isn’t an interstate highway to a green card or citizenship. It’s sort of that temporary reprieve from deportation. That can change, it can go away, you can ultimately never qualify for a pathway to residency," Meyer said.

Looking out a large window at the First Unitarian Society of Denver Church, Hernandez watches the world pass him by.

"I can’t risk being arrested by ICE, so probably the officer is looking for me," he said.
With his eyes welling up with tears, Hernandez acknowledges being unable to leave the church isn’t ideal.

"Now I am the face for 1,000 people and families that risk deportation. I’m one face, but there is behind me thousands of faces."

If his latest request is denied, Hernandez says he'll remain in sanctuary while he continues to fight his case. And First Unitarian says it will continue to let him call the small, cramped room in the church basement home.