Army veteran Ralph Bozella stands outside a chain link fence that rings Colorado's Veterans Affairs hospital construction site in Aurora. For years, Bozella and others have pushed to get this facility built. He remembers, back in 2012, being at a kick-off event for the project.

"I said to everybody in that room, 'This is the most beautiful sight I've ever seen,' Bozella said, "because here it was, finally, after all of those years of political wrangling."

Three years later, the 182-bed, regional medical center is only half built. The 13-building, million-square-foot project is way over budget and won't be done for at least another two years.

That frustrates Bozella, who has battled heart disease, PTSD and prostate cancer. His troubles are a legacy of his time in Vietnam, where he said he was exposed to Agent Orange. He said he's tired of waiting for a new facility.

"What an affront and a disgrace to veterans in this state, people who have literally put their lives on the line," Bozella said. "I'm a combat veteran of Vietnam." 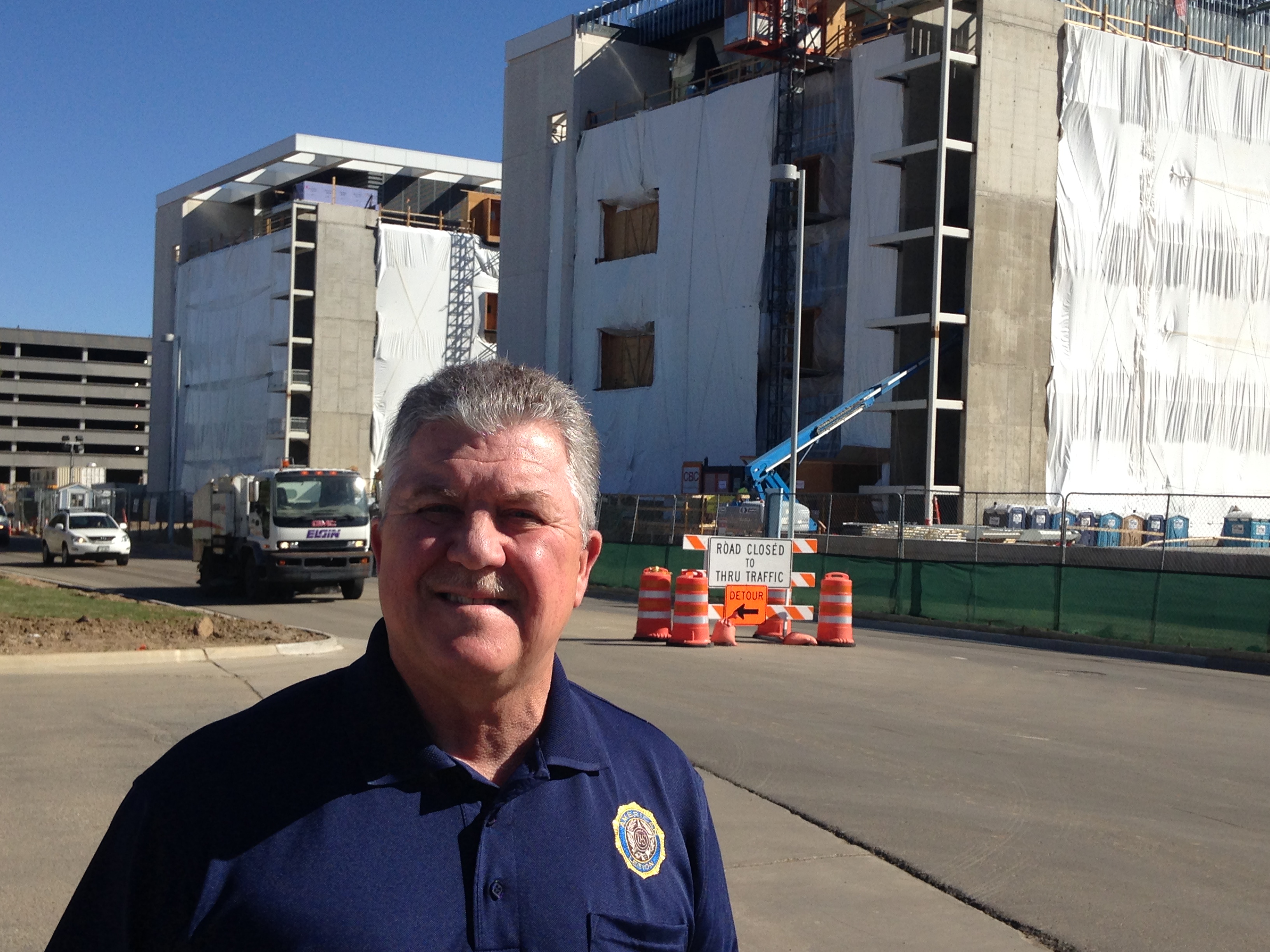 (John Daley/CPR News)Bozella is one of nearly 400,000 veterans in Colorado. Many get their health care through the VA, many at the aging medical center off of Colorado Boulevard in Denver. Bozella recalls a visit there a few years ago.

"They put me in a room with three other men. One air conditioning unit happened to be by my bed and it was cold there and everybody else was hot," Bozella said.  He said he asked and was moved to a single room.  "That place needs to go."

For Bozella, that moment highlighted the need for a new medical center. The old one dates to the 1950s. Veterans complain it's overcrowded. It's had plumbing issues and power outages. Last year, it had to temporarily close operating rooms because its air systems couldn't handle the dust and debris coming from nearby construction.

The VA defends its existing facility, while acknowledging the need for a replacement.  "Overall, the physical condition of our facility continues to be a measured, maintained, and functioning facility," said Dan Warvi, public affairs officer for the VA's Eastern Colorado Health Care System.

Warvi acknowledged there are shared rooms at the facility, but said that if a veteran needs isolation, that person can be assigned to a single room.

The trouble is, its replacement has seen a long list of construction problems reminiscent of the Tom Hanks movie "The Money Pit." In the movie, a couple tries to rebuild an old house, but the kitchen explodes, the bathtub falls through the floor, the stairs cave in.

The film is a comedy. The new VA medical center in Aurora is not.

"It seemed like almost anything that could go wrong did go wrong," said Dave Wise, the director of the physical infrastructure team with the Government Accountability Office in Washington.

In 2013, his team documented problems including an underground spring and a buried swimming pool. There were construction bids put out before design planning was done, soaring labor and material costs and communication problems between the VA and contractor Kiewit-Turner.

With the two sides at loggerheads over costs and delays, Kiewit-Turner sued the VA and temporarily shut down work at the construction site in December 2014. By last month, costs had ballooned to $1.73 billion, five times higher than the initial estimates. 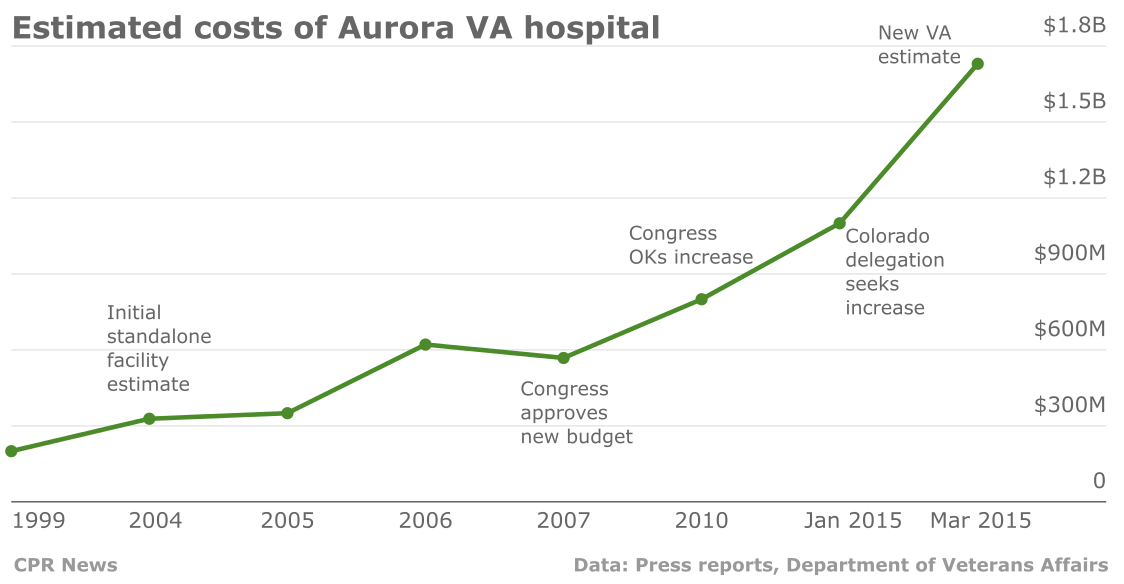 "I think everyone was rather surprised, given what we'd seen from the previous estimates," said the GAO's Wise. "It was much, much higher."

Kiewit-Turner declined an interview request for this story, but spokesman Tom Janssen released a statement, saying the company is "focused on moving this important project forward" for Colorado-area veterans. Kiewit-Turner is confident the VA and Congress would find the funds to finish the project, the statement said.

Divorce with University of Colorado Hospital

"Everybody said this a terrific idea, because we calculated we could save, over 20 years, over $1 billion in operations," said Brimhall.

Then, in 2004, the VA abruptly changed course, opting for a stand-alone facility, explaining it would be able to better provide for veterans health care.

An 'incredible level of incompetence'

Rep. Mike Coffman, R-Aurora, is dismayed at the skyrocketing costs and extended delays.

"Why did it happen?" Coffman asked at a press conference at the construction site on a cold, gray day in December. He answered his own question: "The most incredible level of incompetence and mismanagement that is in fact difficult to explain."

In December, the VA turned over project management to the Army Corps of Engineers. The agency said it's investigating the problems and will hold those at fault accountable. Last month, after news broke of the billion-dollar cost overrun, the VA official in charge of national construction quietly retired. 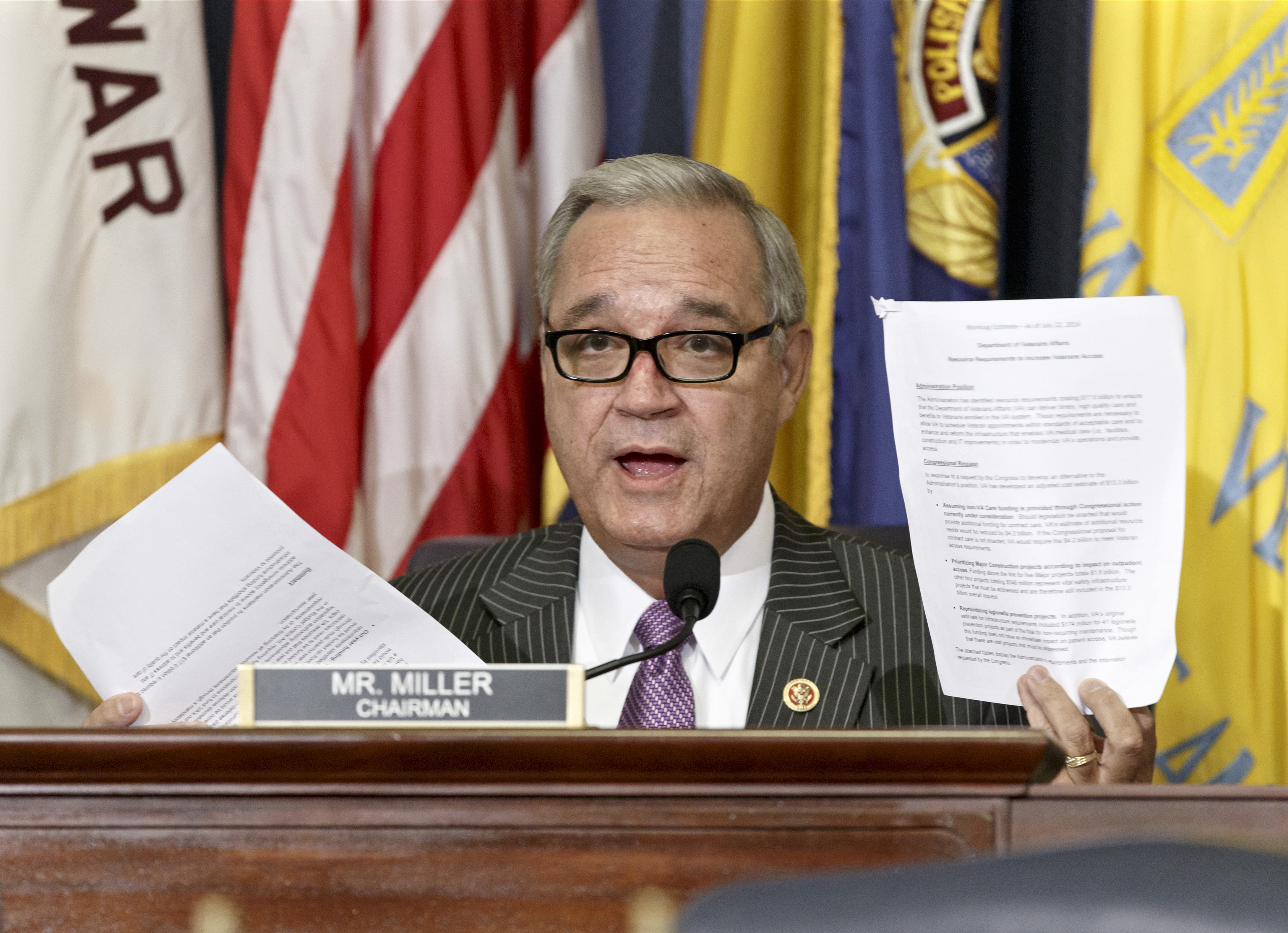 Then, a key lawmaker, Florida Republican Rep. Jeff Miller, the chairman of the House Veterans Affairs Committee, suggested the project could be downsized or even sold.

On Monday, VA spokeswoman Genevieve Billia said the VA "has started discussions with members of Congress to make sure this project had the funding needed to give Colorado veterans the facility they deserve." Adam Bozzi, a spokesman from U.S. Sen. Michael Bennet's office, said the VA had found the $830 million needed to wrap up the project. It would shift money away from a $5 billion fund to address problems over patient wait times.

Coffman, a veteran himself, is calling for more accoutability from the agency. In a statement, Coffman said the project “must be built but the cost overruns need to be paid for without compromising the reforms, recently passed by Congress, to improve the VA’s ability to care for our nation’s veterans."

The new medical center is scheduled to be at the heart of a congressional hearing Wednesday in Washington DC. 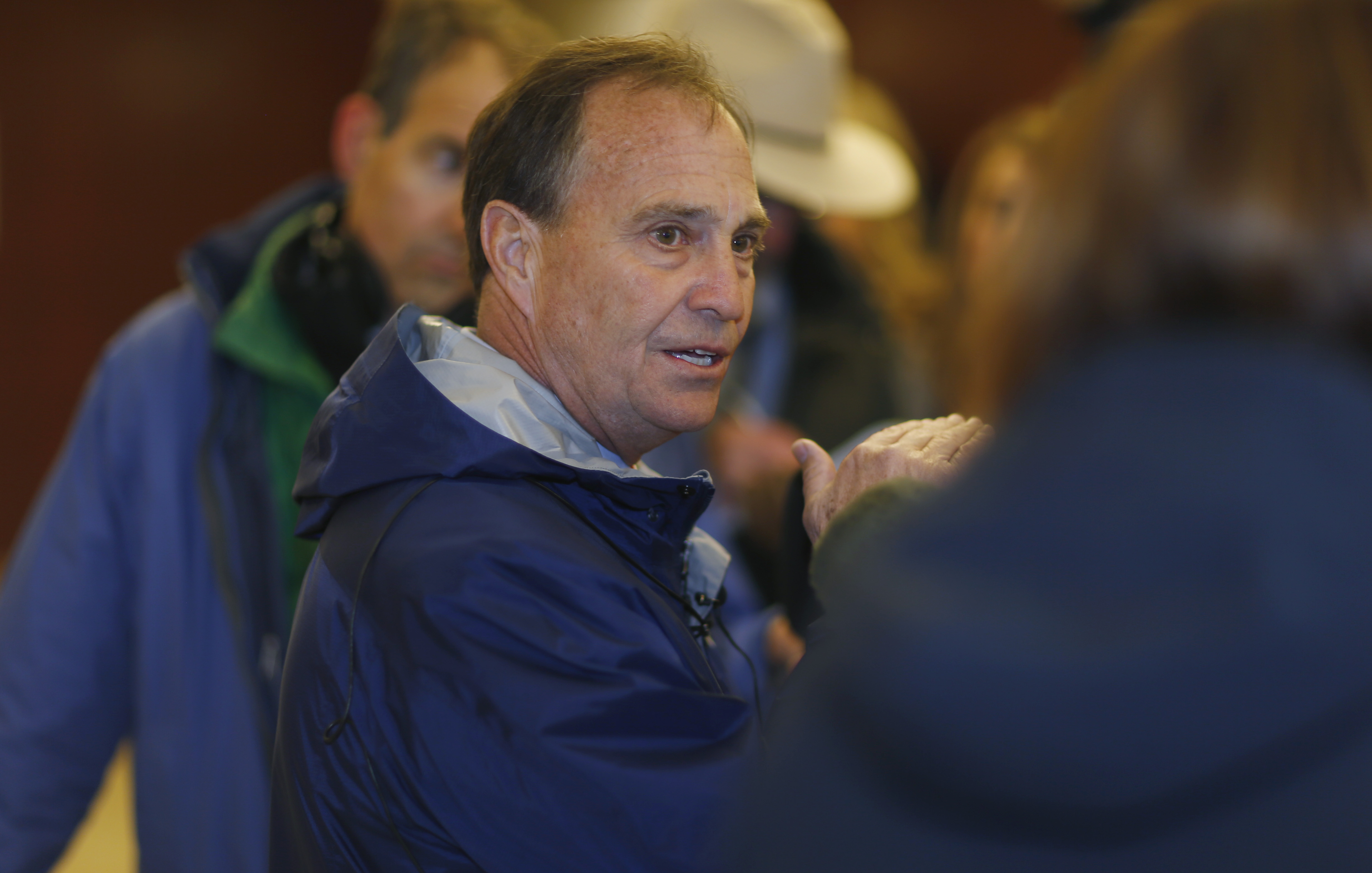 (AP Photo/David ZalubowskiEarlier this month at a press conference at the construction site, Colorado Rep. Ed Perlmutter, a Democrat, admitted the project's proponents have their work cut out for them.

VA Deputy Secretary Sloan Gibson, at the same event, called the situation "unacceptable." He said "I want to apologize. I apologize to veterans." But he insisted the agency will get the project done.

"I want to assure our veterans in the community that we will not rest until we have gotten this project complete and we're seeing veterans here," said Gibson.

Fearful of 'hospital to nowhere'

Back at the construction site, veteran Ralph Bozella said he wants the project to be finished. "If not, how many embarrassed people are there going to be?" said Bozella. "Worse than all of that is, what have you done to your veterans?"

"This can not be the hospital to nowhere," he said.

Until he sees the doors of the new veterans medical center in Aurora open, Bozella worries that's exactly what it is.

Timeline for a troubled project

1995:  Discussions begin about moving University of Colorado health facilities to Aurora from Denver, after Fitzsimons Army Medical Center is placed on a list for base closure.

1999-2004:  University Hospital officials enter talks with VA for a shared facility in Aurora.  Discussions include a possible VA tower linked to the CU project and continue for next 6 years. Preliminary cost for the VA portion is roughly $200 million.

2004:  VA decides not to build a shared facility with the University of Colorado hospital, citing concerns of governance.  Estimated cost of stand-alone medical center:  $328 million.

2005:  VA chooses architectural and engineering firm for a stand-alone facility.

2006:  Architectural firm suspends work until VA acquires another site next to the new university medical center.

2014:  Contractor Kiewit-Turner temporarily stops work on VA project, after a federal appeals board rules the VA violated its contract with builder Kiewit-Turner.  The panel finds VA wanted a facility that far exceeded the money budgeted for it.

Editor's note:  The story was updated to clarify the cause of the temporary closure of operating rooms at the Denver VA medical center.