When Benjamin Rasmussen started photographing Colorado’s legal marijuana industry in 2012 for places like Wired and the New York Times, he noticed they often just wanted one thing.

“A lot of times, people were really interested in a Colorado legalized version of 'Cheech and Chong.' They wanted kind of the classic stoner picture,” Rasmussen said.

But a new photo exhibition in Denver is challenging viewers to look beyond stoners to the different dimensions of marijuana. "Mixed Bag: Marijuana in the Highlands" runs through June 27 at the Colorado Photographic Arts Center. 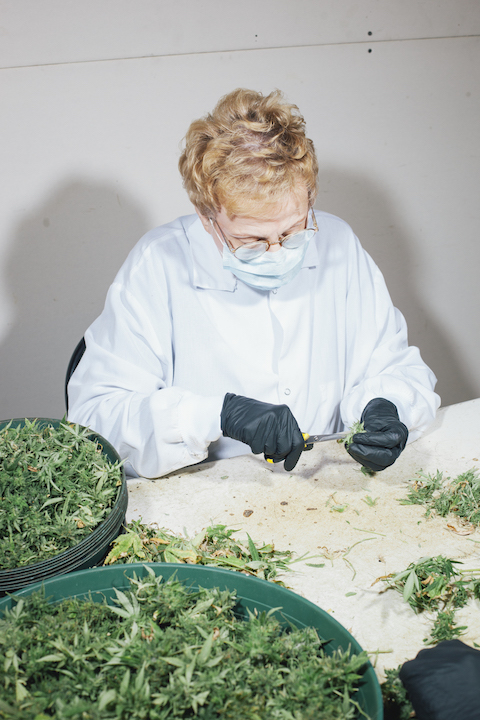 (Courtesy Colorado Photographic Arts Center and the artist)“The exhibition contrasts California with Colorado, and I think it really brings in the scope of Colorado’s marijuana industry,” curator Rupert Jenkins said.

“I really started to try and find ways to communicate visually something that was different than just you know the dude exhaling a massive column of smoke after a bong rip," he said.

On the other hand, New York-based photographer H. Lee relied on natural lighting to get a rustic effect when capturing clandestine grow operations with small family farmers in the woods of Humboldt County, California.

The results are "very dark, organic and intimate,” says Jenkins. And that aesthetic difference underscores the gulf between Colorado and California.

“They really do put you into the ‘stoner frame of mind,’” Jenkins said. “They can be looked at as either celebratory or cautionary, and I know Theo sees them as both.”

A mixed bag for the arts industry

CPAC is hosting discussions on the positive and negative effects of pot legalization. But the organization also knows both the good and bad.

“For instance, the arts industry is feeling it very acutely, in that art spaces are being taken up by grow houses,” Jenkins said.

The director points to artists and organizations fearing being forced to move as affordable spaces dwindle in popular neighborhoods like Highland and RiNo. That includes CPAC, which has to relocate later this year.

“Not directly because of the pot industry but because property taxes are going up so much, and that’s affecting a lot of people,” Jenkins says.

“So this is one of those indirect consequences that perhaps weren’t foreseen.”

Continue below to see other images from the "Mixed Bag" exhibition at CPAC and to hear more from Rasmussen on how he thinks they illustrate the story of pot.