Robin Smith and her growing family were ready to move on from their two-bedroom apartment near downtown Denver. So they placed a generous offer on a four-bedroom house in Arvada.

“We made an offer $10,000 over the asking price, and found out there were 32 offers on the home over a weekend,” Smith recalled.

Heading into the peak home-selling season, many prospective buyers like the Smiths are frustrated. Intense demand for a historically limited supply of homes has led to bidding wars that are driving prices out of reach for many.

In some cases, some prospective buyers are giving up on buying in the metro area altogether.

Smith and her husband moved here from Kansas City three years ago. They both work for national companies, which makes relocating easier. So they considered something a little radical -- they expanded their housing search to Texas.

“Someone recommended Austin, and said it was a little more affordable and still a great place to live,” Smith said. “We actually booked a flight the following week and bought a house.”

They bid under the asking price, and it was accepted. And the seller actually covered some of their closing costs.

That’s a foreign concept to buyers in Denver.

“They’re competing with multiple offers, over list price,” said real estate agent Justin Knoll, with Madison and Company Properties. “Most people want to bargain and negotiate, and that power's been completely taken away from them. So there’s frustration.”

That competition has pushed prices to record levels in Denver for the last 13 consecutive months, according to the S&P Case Shiller Home Price Index. But many buyers are getting cold feet, so they cancel contracts before they close on a house, according to Knoll.

Still, homes in Denver don’t sit for sale long. REcolorado, the area’s listing service, reports homes here sit for 21 days on average. That’s half the time a home sits for sale in Austin, for instance.

That's partly because new buyers continue to pour into the area.

“It’s a great problem to have if you’re in Denver,” said Charles Roberts, who runs Your Castle Real Estate. “Denver is a wonderful city. I’m not from Denver, but I’ll live here the rest of my life, and thousands and thousands of other people are saying that everyday.”

The metro area added more than 50,000 residents in 2014, according to the most recent Census estimates.

Cheap or costly? "Depends on where you’re coming from”

Roberts admits it’s unfortunate that many normal wage earners are getting priced out of what used to be an affordable housing market. But he said interest rates are still near historic lows, and Denver is still relatively affordable compared to East Coast cities.

“They can’t believe how inexpensive we are,” said Roberts. “It just all depends on where you’re coming from.” 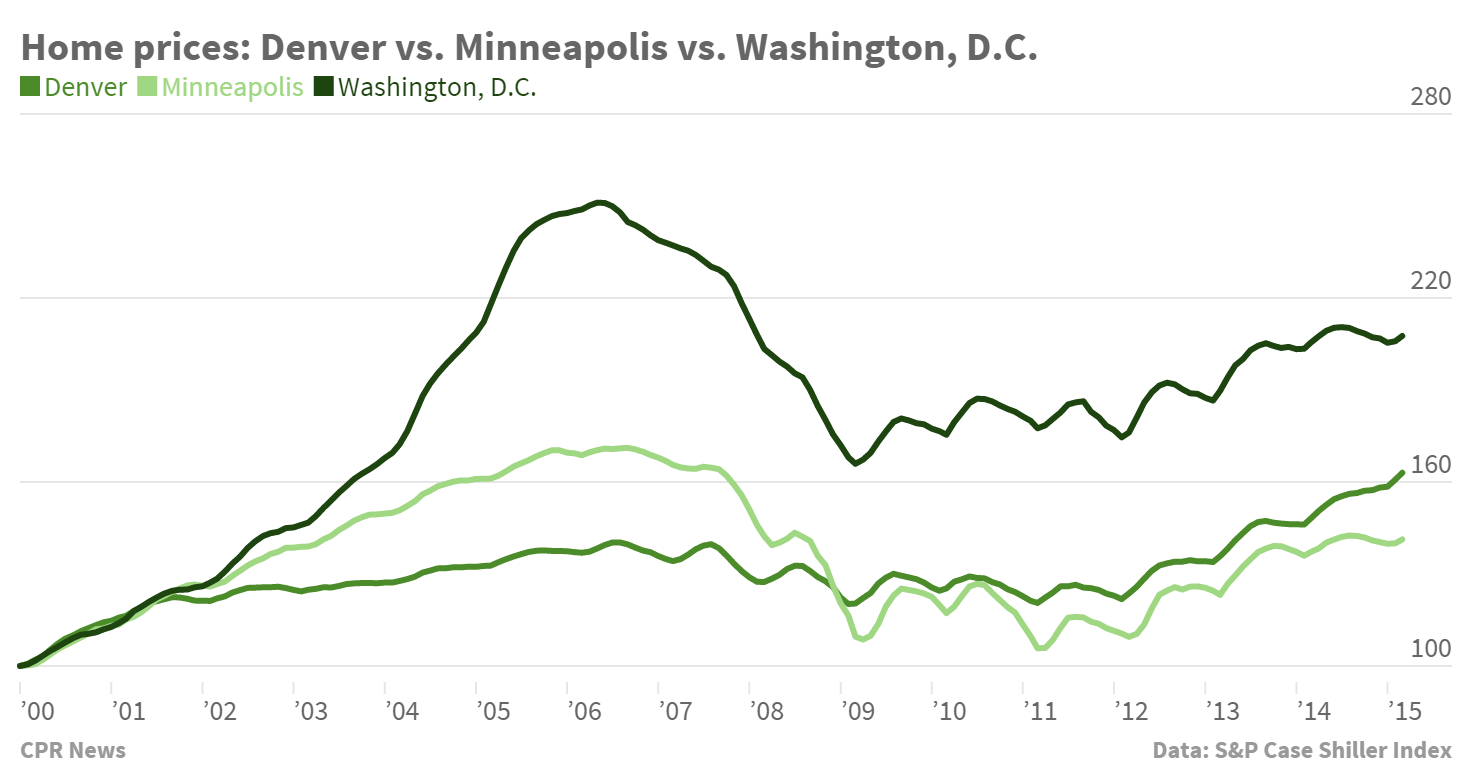 The flipside is that a lot of other places seem cheaper than Denver now.

The alternative to buying is no panacea either. Rents in the Denver area have increased a 26 percent in the last three years, according to Ron Throupe, an associate professor at the Burns School of Real Estate and Construction Management at the University of Denver.

For Robin Smith, she's scared and excited as she gets ready to move to the Austin-area to enjoy her new home.

“We’ll definitely miss Denver and the people here," she said. "But it's just not in the cards for us to get a house here at this time it seemed like."

Smith's probably right, because that potent mix of extreme demand and limited supply doesn’t show any signs of easing.