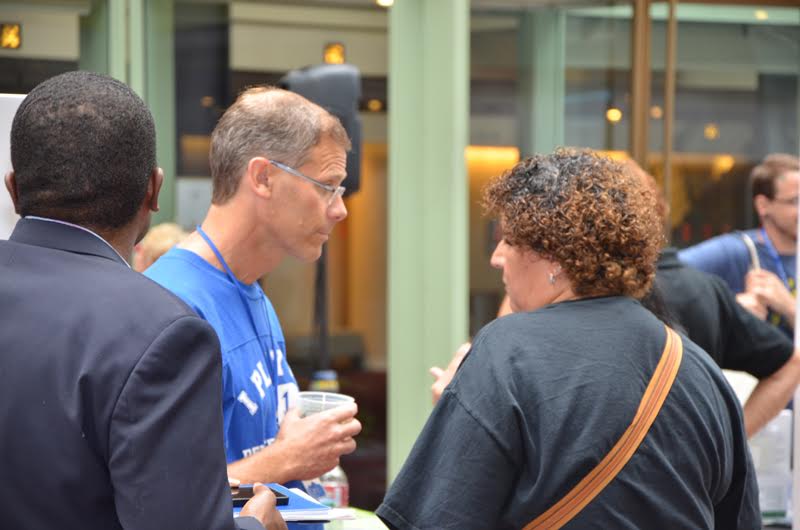 Aurora Superintendent Rico Munn encouraged new teachers to join the union, saying it was a “valuable” tool for him to learn about the concerns of teachers and to work collaboratively on shared goals.

Denver Public Schools is hosting more than 800 new teachers for an orientation before classes start in the largest school district in Colorado.  At the arts complex plaza and on sidewalks, security officers stopped black-T-shirted Denver Classroom Teachers Association members from handing out literature to new teachers.

Union officials said they weren’t allowed to host a table at the event, though the Denver Zoo, Delta Dental, and the Museum of Nature and Science all had tables. Veteran teachers said they tried to sit at the table of their parent organization, the National Education Association, but security intervened and said they couldn’t distribute information.

“I was expecting to have much more open and free access to new educators,” said teacher Aaron Lowenkron. “In the past, we were usually welcomed with open arms and this year it’s a lot of silence, a lot of mystery. From the outside looking in like they want to keep us out.”

He tried to distribute new member literature on the promenade but was told if he did that he would be ticketed by police.

A security official said when a “client” – the Denver Public Schools – rents the event space groups can’t simply hand out literature.  Though the Denver Performing Arts Complex facilities are owned by the city and county of Denver, “that does not mean they are public forums under the first Amendment of the Constitution of the United States,” according to a  DPAC “Free Speech Information Sheet” that was distributed to union members.

In previous years, the DCTA has hosted a breakfast for the hundreds of recently hired teachers at which they could provide information about the union. But this year, DCTA officials say they weren’t invited to do that.

Denver Public Schools spokesperson Will Jones said the breakfast was informal this year, "providing teachers with a window of time during which they could arrive and mingle with one another.”

DCTA president Henry Roman addressed new teachers for 10 minutes and Jones said new teachers could attend an optional reception at the end of the day to find out more information about the union.

Unable to gain access to teachers the way they had hoped, union representatives decided to rent the Limelight restaurant, which sits in the arts complex. New teachers could reach in over a barricade for DCTA literature, but union officials were told they couldn’t hand information to new teachers.

“This sort of shutting down of new teachers voices is really sad to me and the fact that we are not having the ability to communicate with them really prevents a lot of good work happening for our students,” said teacher Charlie Gaare. “What’s really sad is that 57 people have signed up for DCTA and last year at about this time we had about 300 people sign up.”

Tensions have risen between union members and district officials who have spent months bargaining over a small slice of the teacher’s contract, called ProComp, which has additional pay incentives. The entire contract expires at the end of next summer.

Sarah Marks, executive director of strategic human resources support for Denver Public Schools, was upbeat about the district’s relationship with the union.

“It continues to be a very collaborative relationship,” she said. “We have worked with them   to try to facilitate great opportunities throughout the day to interact with teachers, but this is really a way for us to welcome the hundreds of new teachers we have to the district and share all the different types of resources that we have.”

Amy Nichols, president of the Aurora Education Association, said her group hosted a breakfast for about 360 new educators Monday morning.  Union officials had an hour to circulate among teachers and answer their questions. 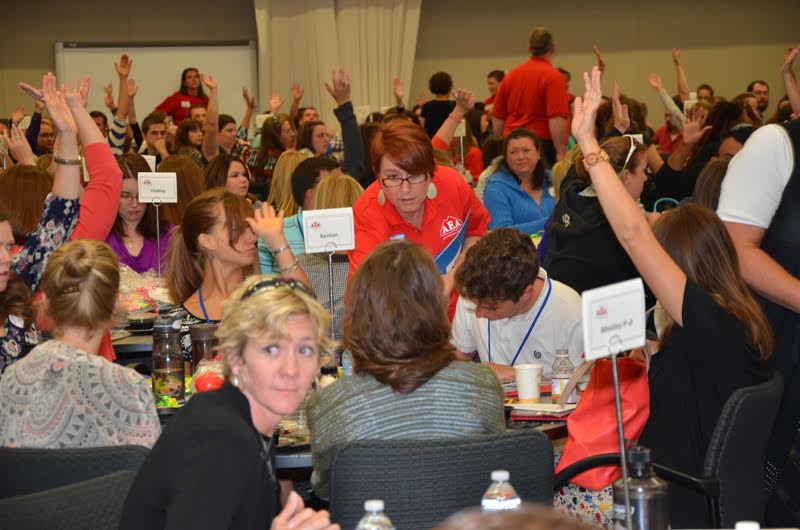 [Photo: Courtesy of MWetzel]“We [union and district] have a very collaborative working relationship,” she said. “We don’t agree on everything but our main goal is making sure teachers and students have the resources they need to be successful. When everyone is working together on a common goal, you get their faster."

This week at Jefferson County School District’s new teacher orientation, the union won’t have much of a presence either. For the first time this year, union officials say they were “disinvited” by Superintendent Dan McMinimee. In the past, the union has sponsored a lunch at which members talk to new teachers about the association. The union has also co-facilitated workshops with district officials.

“It was a very collaborative event historically until this year,” says Scott Kwasny, communications director for the Jefferson County Education Association.

Tuesday morning, teachers with the union stood on the sidewalks congratulating new teachers as they filed into orientation at Green Mountain High School. They offered new teachers a flyer to a welcome party hosted by the union scheduled Tuesday afternoon at Addenbrooke Park.

Then district security showed up.

“They were telling teachers to get off school property,” said Kwasny.

Soon Lakewood police arrived, he said, threatening teachers with trespassing charges. Michelle Lyng, spokesperson for the district, disputes that saying "we didn’t feel we needed to resort to ticketing people."

The district's legal counsel then gave union members a bit of  space on public sidewalks.

Lyng says the JCEA is welcome to invite teachers to a private event, but the teacher orientation days are focused on preparing teachers for their first day of schools.

"We are 100 percent focused on creating a positive environment where teachers can focus on getting ready for their first day of school,  that’s what teacher induction is about,” she said. “Just as we wouldn’t allow Gideon Bible folks to give out bibles at our inductions, we also don’t allow outside groups to participate in the official district business. This is district-focused day.”

The district recently informed the union it could set up a table at Tuesday and Wednesday's orientation. Kwasny says that’s quite different from the past when the union would sign in all the new teachers, collect their email addresses, and pass them on to the district. This year the union will host two gatherings for new teachers at local parks.

“It’s frustrating but it’s indicative of the way teachers have been treated since the board majority has come into power,” Kwasny said, referring to the election of a conservative board majority that is currently facing a recall attempt.