A year ago, George Washington High School student Cheyenne Quinones dreaded coming back for her junior year. The school was struggling with a deep division, largely set on racial lines, over advanced classes that pitted students and parents against each other.

Now, Quinones shows off the school on Denver's east side to freshman as a tour guide. She points out where the best water fountains are, the side stairwells, and the tricks of the lunch line.

“I didn’t really want to be here, but now that I see there’s some type of change happening," she said. "I’m proud of what we’re doing.”

The freshmen tour is a sliver of a massive year-long effort to rebuild what was for years a fractured school known as “GW” or “George.” Critics say the International Baccalaureate, or IB, program fueled a divide among its students. The rigorous, internationally recognized diploma program draws some of the smartest kids in Denver.

“The basketball team and the IB kids. You wouldn’t really brag about the school itself,” he said.

Hall said IB kids, almost a third of GW’s 1,400 students, were the "treasured" kids at George. The other two-thirds of the school were called "traditional" kids. They attended regular, honors and Advanced Placement classes. Many agree traditional kids got fewer opportunities and resources, right down to not having the day planners IB kids had.

In the lunch room, the IB kids would sit on one side; traditional kids on the other. Each side stereotyped the other, fueling a racial divide. Many, though not all, of IB kids are white. Traditional kids are mostly African-American or Hispanic.

Students said the divide got worse with every passing year. A persistent achievement gap, high teacher turnover, and a continued sense of racial division among students pushed the district to act.

"There were a lot of leading indicators saying something had to change,” said Kelli Pfaff, director of strategic supports for Denver Public Schools.

In the spring of 2014, the school district hatched a plan to open up IB to more students by doing away with the specialized 9th- and 10th-grade pre-IB program. Parents were enraged. Soon a revolt was in full swing, punctuated by a stormy May 2014 meeting in the school library. Some parents feared eliminating “pre-IB” would dumb down the program. Some students said “pre-IB” prepared them for the program’s tough courses in 11th and 12th grade. Administrators were vague on details, only adding to parents’ fury.

The district needed a new approach. DPS Superintendent Tom Boasberg decided to allow the school to design its own reform program.

Todd Mackintosh hosted a meeting early in the process with other parents, school board members and district brass. It was a tense affair, he said.

“You could have cut the air with a knife at the beginning," he said.

Mainly, he said, parents were confused about what the school's future would be. Everyone realized pretty quickly that to rebuild the school, it would take a lot of hard work from the ground up -- parents included. By the time the meeting ended, “There were smiles and everyone was saying, ‘The proof will be at the pudding. Let’s see how this plays out,’ " Mackintosh recalled.

The school had a year to come up with a plan. First, the district hired Jose Martinez, a retired principal from Jefferson County, to lead the school as interim principal. Martinez said the school's dysfunction can't be blamed on one single person.

“I think it came from many years of falling asleep on the job,” he said.

Here’s what he noticed: No unified school culture; no consistent training for teachers; little communication between administrators, teachers and students; not even a regular cycle for swapping out ancient textbooks; multiple new principals in rapid succession; and demoralized teachers.

Like other teachers, Marcus Lee was anxious. But this new administration, he noticed, seemed to want to work with teachers.

"There was a different tone. There was a greater willingness to really be transparent and speak frankly," said Lee, who teaches economics in the IB program.

When Martinez announced he would stay another year, teachers gave him a standing ovation.

Before long 60 people – parents, teachers, students and others – had divided into four action committees to unify the school, academically and racially. It was called the One George initiative.

“We want one high school,” said Scott Lessard, who will take over as principal in a year. He was hired partly to beef up the school’s advanced placement and honors program, which many complained had been neglected. As the assistant principal at Denver’s Thomas Jefferson High, Lessard led the expansion of the AP program from a small number of students accessing and passing such classes to unprecedented levels in just a few years.

The four “action” groups met almost weekly for months and hatched a plan. The IB program would be open to students in 11th grade -- they wouldn’t have to apply in eighth grade to get into pre-IB. Now, all George Washington students can choose to take regular, honors, pre-IB, and career tech classes in ninth and 10th grades. That plan took a ton of work to realign courses and curriculum so that everyone who chose to go into IB in 11th grade could be academically ready.

“Now, any student who has prepared themselves, has good grades, has good attendance, has good intent, is allowed to be in the program,” said Martinez.

Final Piece Of The Puzzle: Students

The most important piece of the changes at George Washington was the students; they still needed to unify.

Two weeks ago, about 100 upperclassmen – from every racial group and academic program – came together for a retreat at the University of Denver. They went deep into George Washington's racial and academic divide. They addressed stereotypes each group had about the other. 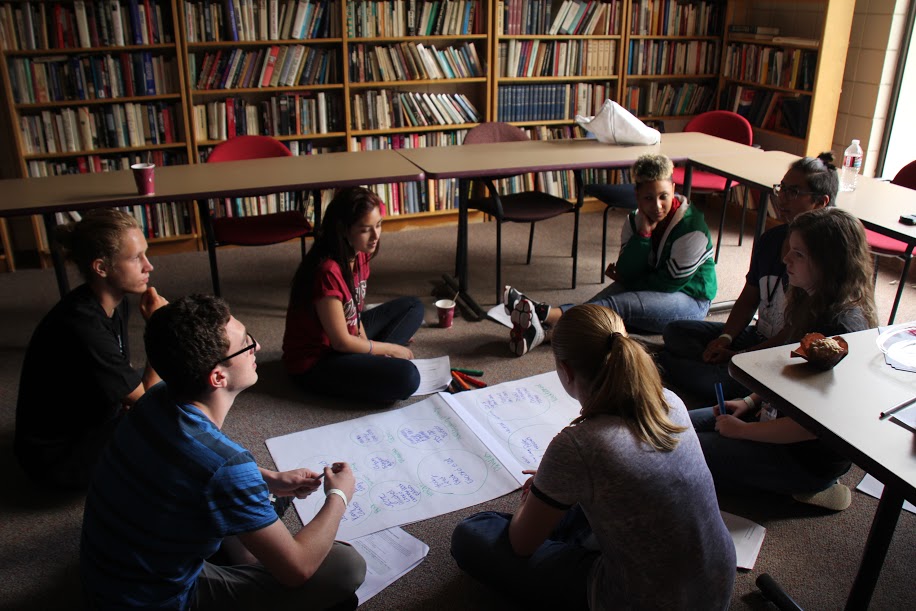 Haneen Badri, who is in the traditional academic program, said her non-IB friends thought IB students were "stuck up" or "snooty."

When she heard how deep the stereotypes went, “I felt kind of heartbroken," Mackintosh said. "The fact that we talked about it, I think, made it better.”

Student Hezekiah Hall remembers the stereotypes about so-called "traditional" kids: ghetto, loud, disrespectful, scary, and drop out. But when he sat in a room and listened to the IB kids, he said they were all good kids with open minds.

“When I heard them talk, I honestly thought, 'they’re human beings,' " he said. "It was just really eye-opening and [I was] really relieved to see some of them are thinking the same way as us.”

Moving forward, new students of all races and academic programs will meet in small groups four times a week as part of their freshmen load. Future principal Scott Lessard calls these groups the "greatest hope for the future of George Washington High school."

Teachers say they’re struck by the energy and enthusiasm that’s enveloped the start of school this year.

“I never understood what it would take to change the culture of a school,” said IB teacher Marcus Lee. “But I think I definitely got a glimpse of that."

It looks like the buzz about a new George is taking hold. Already, more freshmen are enrolled than expected. The school's had to expand the number of pre-IB classes offered. It's a long way from the stormy community meetings and living room huddles in parent Todd Mackintosh's house a year ago.

He said the transformation at George Washington has been nothing short of “amazing.”