Before Denver, gold miners and homesteaders, the land that now is Colorado was more Mexican than American. This week, a half-dozen horseback riders went seeking that 1840s state of mind out on the Comanche National Grasslands southeast of the city of La Junta.

Their goal was to spend three days on the trail living like the traders and frontiersmen who traveled this country more than 150 years ago: emulating the clothes, the gear, the food, even the discomforts and dangers, as authentically as possible. It was a mission aided by the remote scenery of southeastern Colorado, where the rolling prairie has changed little since the days of Kit Carson and John Fremont.

"Every once and awhile you stop and look around and say, ‘the big names that we’ve all read about were here’" said rider Henry Crawford. "We did all the things that they would have done back then. It helps with the spirit of the adventure." 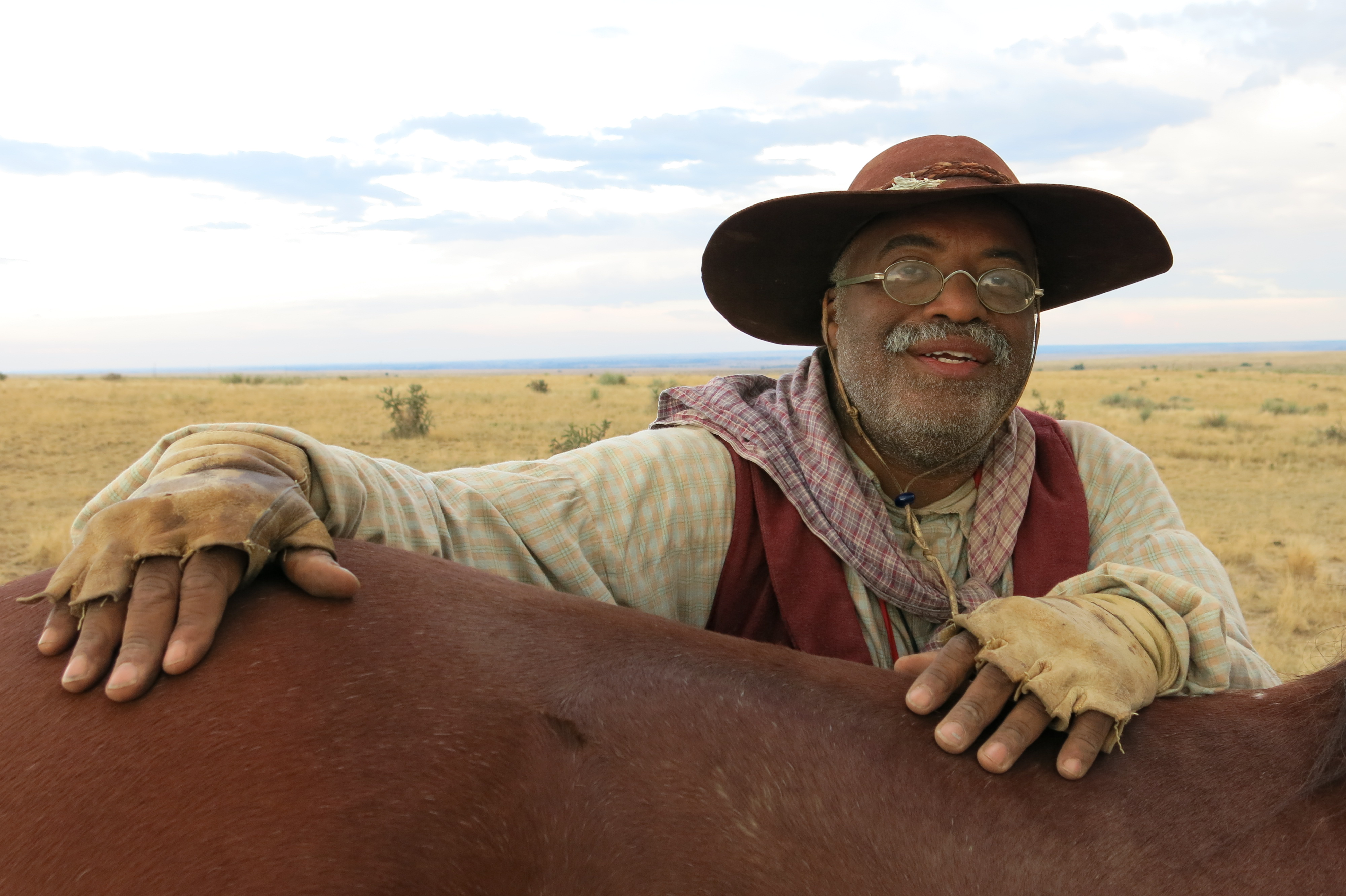 These men had the same destination as many of earlier travelers: Bent's Old Fort on the Arkansas River. The massive adobe fort, reconstructed by the National Parks Service in the 1970s as a National Historic Site, is hosting the 2015 Fur Trade Symposium that runs through Saturday. The triannual gathering brings together academics and amateur historians with a passion for the era and hasn't been held in Colorado for decades.

While past symposiums have usually included a few historical interpreters, rangers at the fort decided to put them front and center. So while the scholars are presenting papers on topics like "The Trade and Intercourse Laws, Fur Traders, and the U.S. Government," nearly 70 re-enactors will present everything from how to pack a horse in the Mexican-style to how to de-flesh a raw buffalo hide.

"Living history, which is what we do, is probably the most effective way of teaching history, because one thing you get to do is use all of your senses," said Crawford, who works as the curator of the museum at Texas Tech University.

But even though he works in a historical field, Crawford acknowledges that many don't understand his passion for reliving the early West. Sometimes it's easier just to tell people he's going camping in Colorado, and leave out that it won't involve a single item from REI or North Face.

Re-enactors at this week's event say they're drawn to this pastime for a complex mix of reasons. It feeds a survivalist impulse: to see if you can tough it out like your ancestors did. It provides the escapist thrill of trying on a new persona in an older era and the camaraderie of sharing a campfire with people who share your obsession. And finally, they enjoy all the ways it requires them to work their hands and master the most obscure of skills, like how to tan an animal's hide using its brains, or how to make a button out of a lead bullet.

"It's a journey without a destination, because every time you can find something that you can improve," said re-enactor Dennis Leonard of Iowa.

"Every time you do this you get a little bit deeper," said NPS ranger John Carson, who does historical interpretations in the role of his great-grandfather, Kit Carson. "It becomes an addiction." 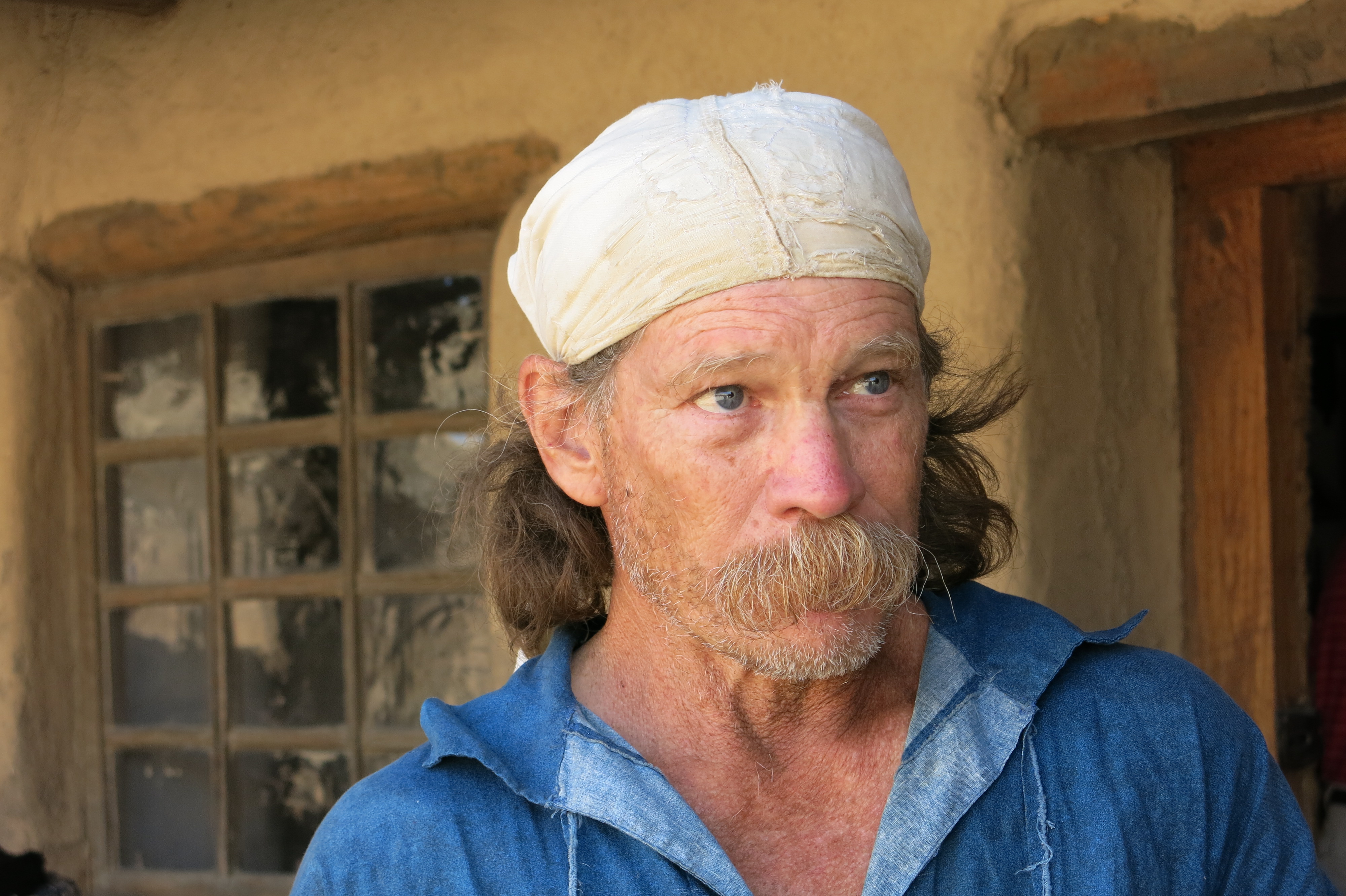 Like many addictions, this one takes a financial toll. Replica firearms generally cost well over $1,000. Historically-accurate leathers can come in at $20 a square foot. "I like to talk about 'mountain man Armani'" jokes re-enactor Bill Bailey. "The gear looks simple. [It is] terrifically expensive."

But for Bailey, all that expense is worth it for the chance to feel as if, just for a moment, you've stepped inside of history.

"At night it's magic, when the man are standing around the fires, and the way they're dressed and their hats and the firelight [hitting] them" the scene can look just like a historical painting, said Bailey. 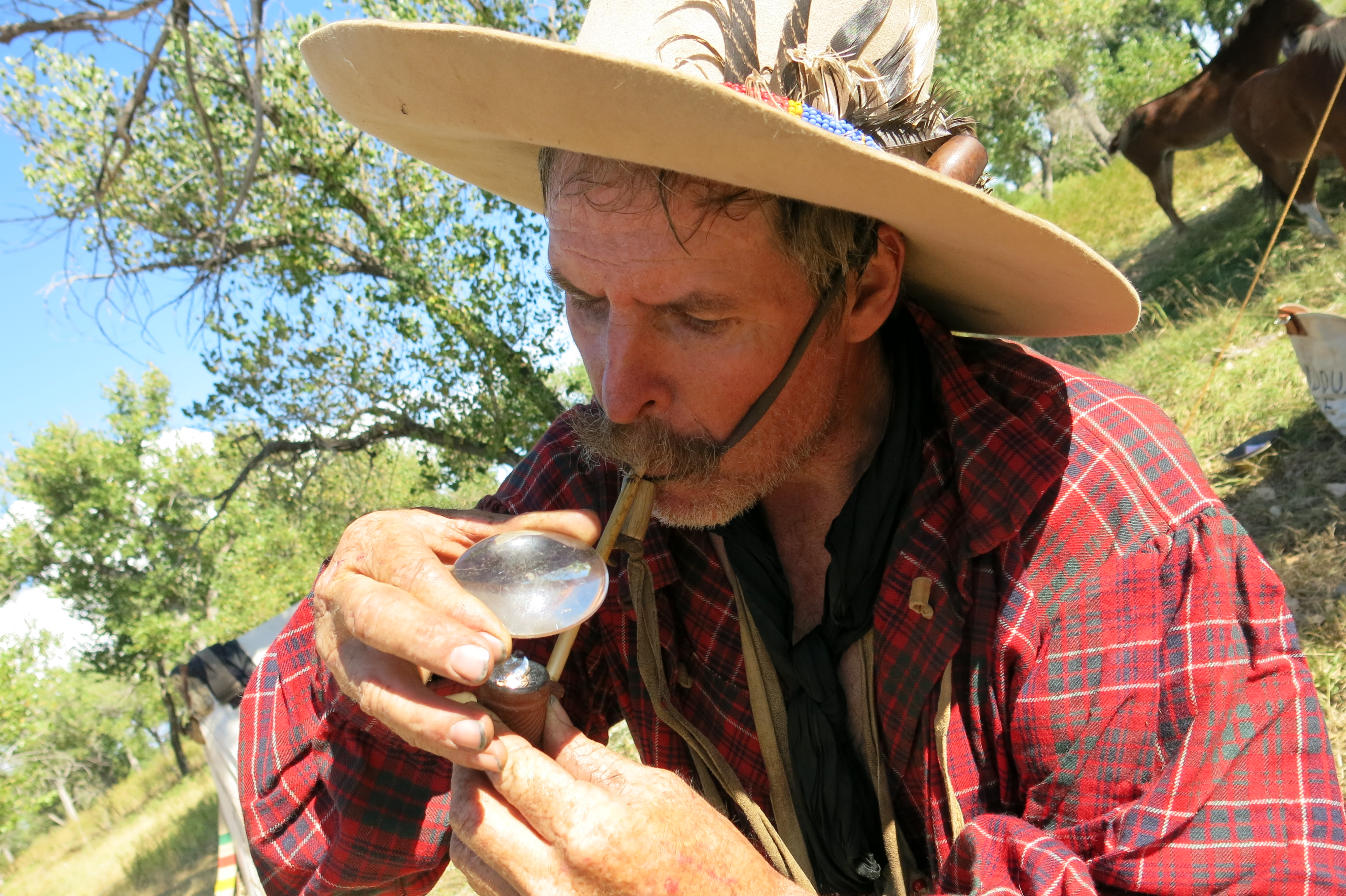 Most of the interpreters at this week's event have been involved in historical re-enactments for decades. Many belong to the American Mountain Men, an organization whose membership requirements read like a list of dares: "must have spent at least five days traveling in primitive conditions on foot, snowshoe, canoe, and/or horseback," "must be able to converse using Plains Indian hand signs," "must have hunted and killed at least one game or fur-bearing animal with a muzzleloading firearm or primitive bow."

This week's event at Bent's Fort represents higher stakes than usual for many of the interpreters. At a Mountain Men gathering, a re-enactor who gets a detail wrong will get mocked around the campfire. But for the symposium, they have to able to quickly and correctly field all sorts of questions from both the public and possibly the event's academics.

The re-enactment this week is set in 1843, a transitional year for the fort. The beaver skin trade was on its way out and buffalo robes were becoming the top commodity. At the time, Bent's Fort was the only permanent settlement on this stretch of the Santa Fe trail not controlled by Indians or Mexicans, making it a friendly stop for American soldiers and travelers. All of this history is something the interpreters had to steep themselves long before they got to lace up their buckskins.

Ranger John Carson said he's been prepping his volunteers to fully embody the year and their role.

"Take a minute, think about what you know and what you don't know as your person. Do you even have an idea who the president is out here?" said Carson. "Realize you might get a newspaper that's six-seven months old." 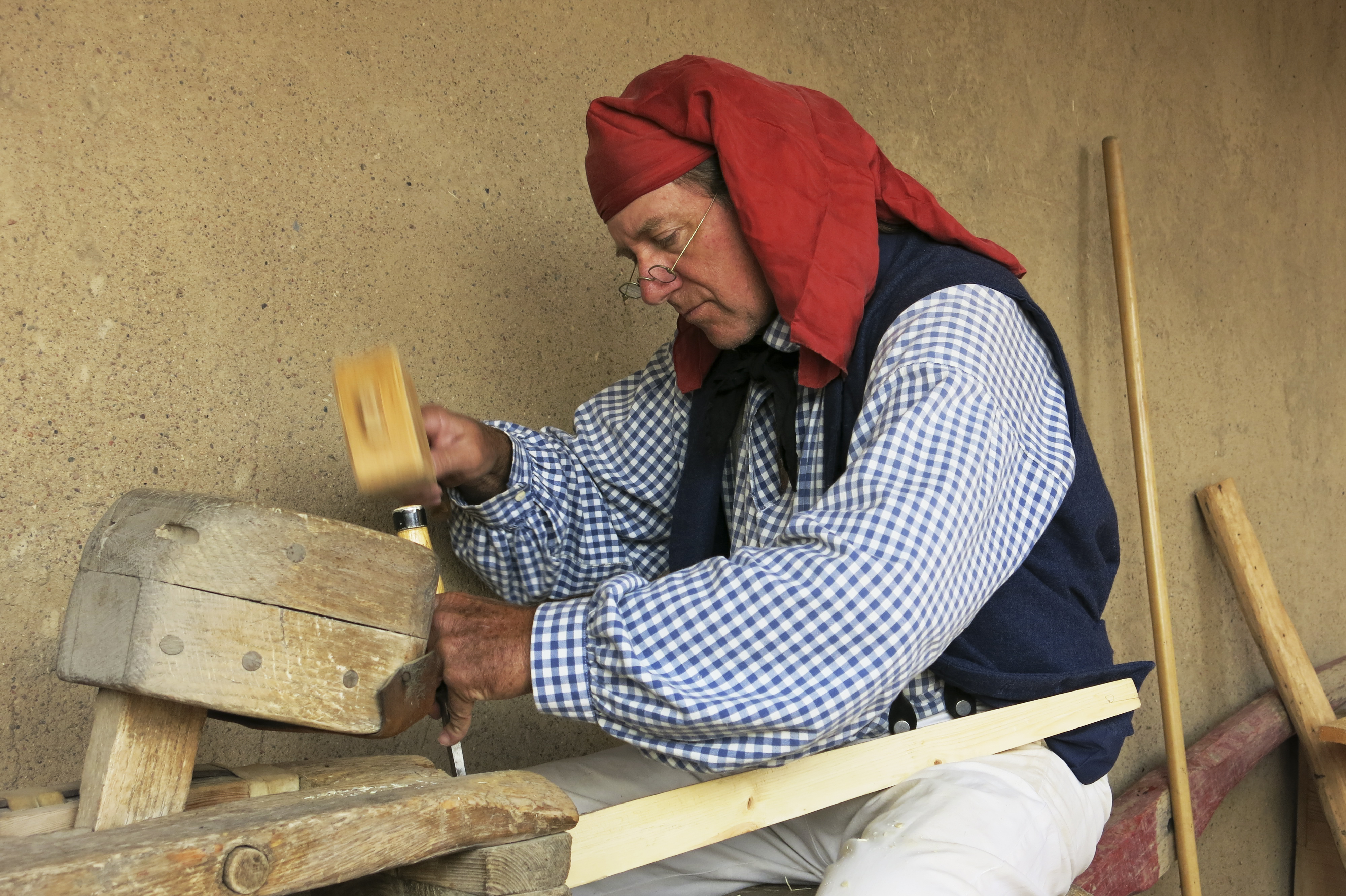 Faced with such a daunting responsibility, first-time re-enactor Gerald Istre of Lousiana decided to take the easy way out: his character is deaf and unable to answer questions.

"I don't know what to say. I don't want to mislead anyone," said Istre. Instead he's using his real-life skills as a woodworker to help out in the fort's carpentry shop.

But even with his mouth shut, dressed in a borrowed outfit, and keeping a low profile, Istre is already loving his first taste of historical interpretation.

"If my wife would allow it, it would definitely be a black hole I would never find my way back out of," he said.

You are one of the CPR readers who wants to know what is really going on these days.
We can help you keep up - The Lookout is a free, daily email newsletter with news and
happenings from all over Colorado. Sign up here and we will see you in the morning!