Cities across the country, including Denver, are trying to come to regulatory grips with services like Airbnb, which link folks who want to rent homes on a short-term basis to others looking for an alternative to hotel stays.

One of the raps against Airbnb is that it causes rent hikes by taking rental inventory off the market, tightening demand and driving up prices. The company, on the other hand, says that it helps cash-strapped middle-class homeowners make their mortgage payments by occasionally renting a room or their whole home.

There's some truth to each of these positions, but how much? It's a tough question to answer because Airbnb generally keeps its data private. The company says it has worked with Denver city officials for a year-and-a-half as policymakers draft new regulations for short-term rentals. But staffers told a City Council committee in September they are struggling to quantify the use of short-term rentals.

A CPR News data scrape shows there are nearly 1,700 Airbnb units in the city. Our analysis also suggests that most units are rented a handful of times a month or less, and most hosts only rent out one unit. (Read more about the data here.)

That said, 118 entire home units appear to be rented at least half the year, suggesting they are likely to take scarce vacancies off the city's rental market. But one housing expert, Ron Throupe, an associate professor at the University of Denver's Daniels College of Business, said he doesn't think that's enough to affect rental prices in the area.

Short-term rentals are technically illegal in Denver, but the city admits existing laws are rarely enforced. The new rules, currently in draft form, would require hosts to have a business license and to live in the property they rent out. Luke Palmisano, aide to Councilwoman Mary Beth Susman, said he anticipates the full Council will take up the issue early next year.

A top concern so far is the fear that short-term rentals are snapping up affordable housing for permanent residents.

"It's about the availability of stock for middle-income folks," Councilwoman Robin Kniech said at a neighborhoods and planning committee meeting in September.

This report aims to give some context to that concern. However, while Airbnb is the most popular short-term rental service in Denver, it's not the only one. VRBO and Flipkey offer similar services and they are not represented in this report.

Where And What Are The Airbnb Rentals In Denver?

This map shows where Airbnb units are located in the city. Darker shades of blue indicate more units.

Airbnb rentals are concentrated around downtown and other tourist destinations. Five Points and Capitol Hill are the top neighborhoods by raw number of rentals.1 Results are similar when factoring in neighborhood density. Entire homes are by far the most popular type of listing:

Occupancy of Airbnb rentals is perhaps the most important piece of information to regulators. Critics worry that affordable apartments and houses are being turned into short-term rentals at the expense of would-be permanent residents. And in a hot real estate market like Denver, that concern carries some weight. 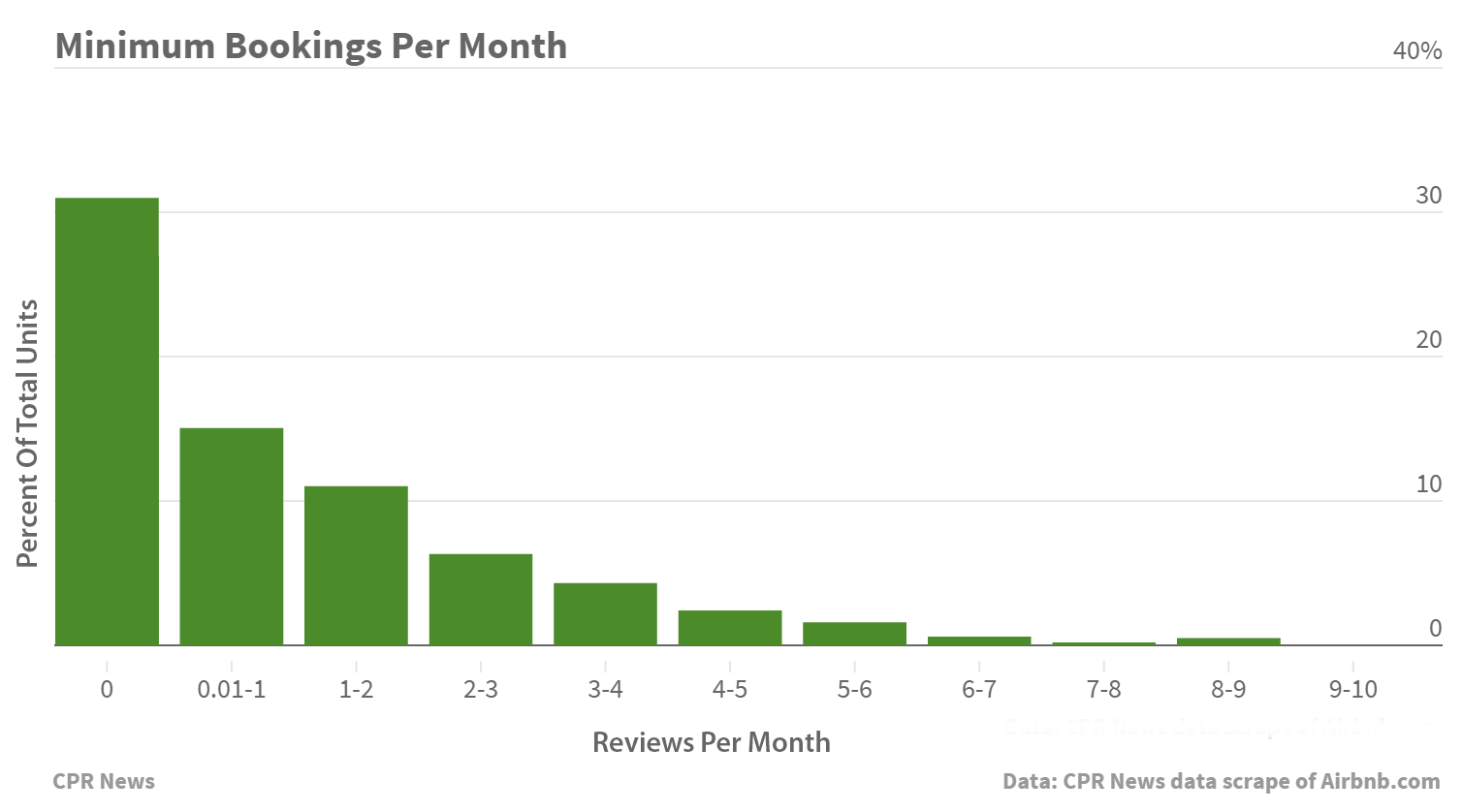 The chart above shows the vast majority of listings are reviewed less than once a month. This supports Airbnb's claims that most units go unrented most of the time.

But reviews underestimate how often units are rented; Airbnb says 72 percent of guests leave reviews. So that means a listing reviewed 10 times a year may have hosted 15 guests. And most guests stay for longer than one night -- Airbnb says four nights is the average in Denver -- so that listing with 10 reviews was more likely occupied for about 60 nights. Airbnb critics and city governments, including the San Francisco Planning Department, have used such methods to estimate occupancy rates.

One hundred and eighteen entire home listings have an average of at least 31 reviews per year. Thirty-one reviews per year means a unit was likely rented for at least half the year, a threshold the New York attorney general's office used to determine when a short-term rental took a unit off the long-term rental market.

The estimate of 118 units is higher than what Airbnb reported. Internal company data provided to CPR News says 93 percent of entire home listings in Denver were rented out fewer than 180 nights per year. That equates to about 70 high-activity listings. The average unit is rented for fewer than 55 nights per year, the company said.

"I don't believe that number of homes effects pricing," Throupe said in an email.

One hundred and eighteen units would account for about 2 percent of the city's 6,686 vacant rental units; 70 units is about 1 percent.3 Denver County's current rental vacancy rate is 4.9 percent.

Neighborhoods near downtown have the most high-activity listings:

What Does An Airbnb Cost?

Nightly Airbnb rates range from $15 for a tent pad south of Ruby Hill to $2,380 for a castle in Capitol Hill. The city-wide average is $135 per night. Rates vary significantly by type of rental. 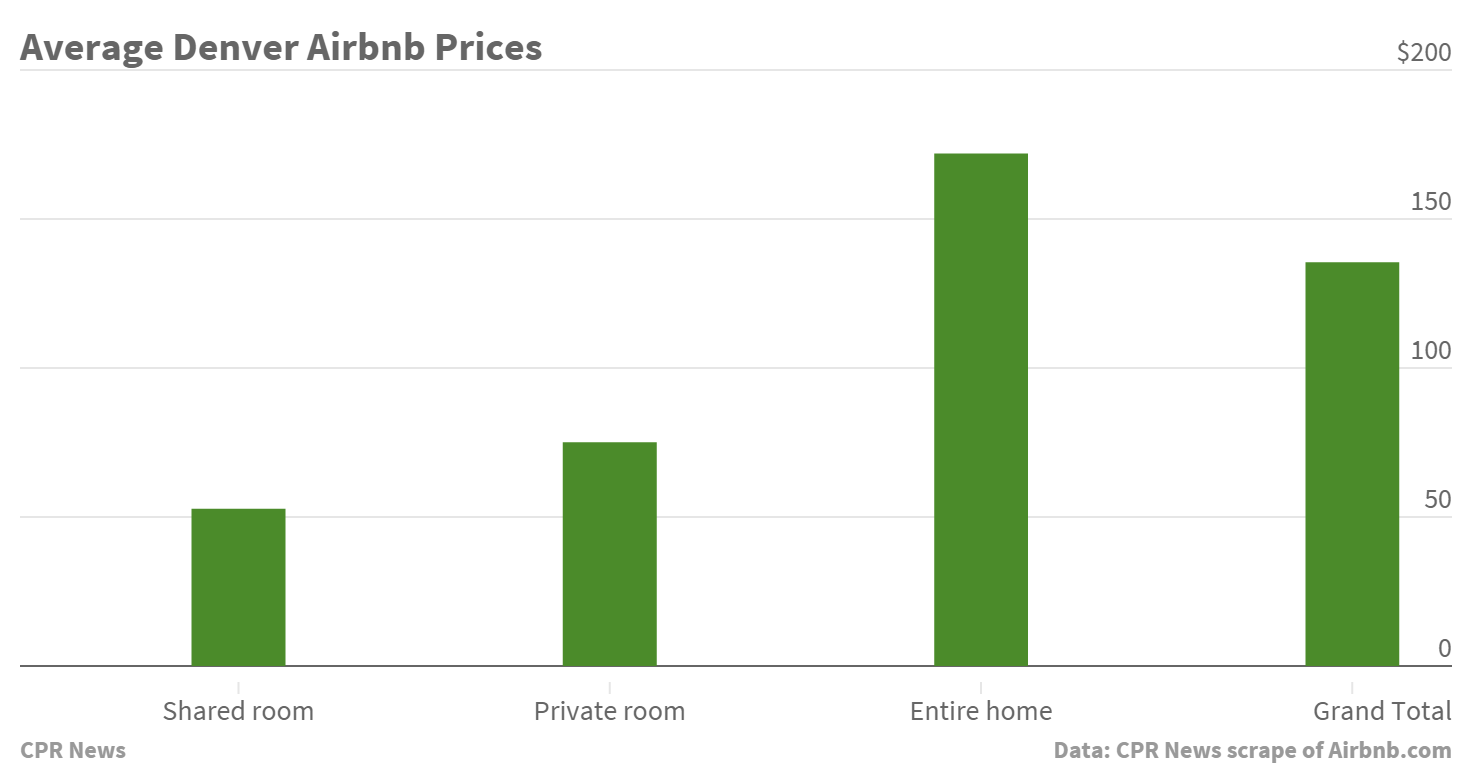 Location in the city determines price, as well. For neighborhoods with at least 10 listings, the most expensive neighborhoods are Union Station and Jefferson Park:

Who Are The Hosts?

The draft proposal on short-term rentals working its way through the City Council would ban hosts from renting a property they don't live in. More than 80 percent of Airbnb hosts, or about 1,138 people, only have one listing. That means about 200 hosts could be affected by such a regulation. However, Airbnb told CPR News many people with multiple listings share a second room in their home. Still, 54 hosts have three or more listings. These hosts make up 4 percent of all hosts but control 13 percent of all listings in the city.

This table shows the distribution of the number of units per host. For example, 158 hosts, or 11.7 percent of all hosts, rent two units on Airbnb.com.

Who Enforces The Laws?

When Denver finalizes its laws for short-term rentals, Airbnb hosts will be responsible for making sure they follow all regulations. The company warns hosts to be aware of local laws, but doesn't prevent them from being broken.

“Our role is really educating the community about those rules," said David Owen, regional head of public policy at Airbnb. He noted the company operates in thousands of cities across the world and said short-term rental regulations are most successful when they are enforced by municipalities, not companies.

1) Our scrape on Aug. 24 found 1,676 units for rent within city limits. The data scrape included latitude and longitude information for each listing. Neighborhood boundaries were provided by the City of Denver.

2) The number of units reviewed an average of at least 31 times a year was calculated by dividing the number of reviews by the date of the first review. The data used for this chart threw out about 700 listings added in the six months before the scrape date. Some new listings already had a significant number of reviews, leading to artificially high monthly review rates.

3) Rental vacancy data is from the U.S. Census Bureau.