When asked if he'd encourage someone to get into farming, Dave Eckhardt talks about the pride of growing food and running a business, and carrying on the family tradition. Then he pauses for a moment, and adds:

“If you have any kind of suicidal tendencies, it’s best that you stay away from production ag.”

It's never been easy to be a farmer, but these days it’s even harder.

In the face of falling commodity prices, farm incomes have dropped too, and are forecast to hit the lowest level since 2002, according to the U.S. Department of Agriculture. It’s a wild swing in fortunes even for a business used to highs and lows.

Eckhardt just finished the last of his corn harvest from his 3,200 acre farm in La Salle, in the heart of Weld County, one of the most productive agricultural counties in the country. He says his was a good harvest, but a glut of commodities, from corn to wheat to hay, sent prices spiraling downward this year.

Corn farmers have been hit particularly hard. Since posting a record $939 million harvest in Colorado in 2012, prices have been cut by more than half. A bushel of corn sold for $7.76 in September of 2012, three years later corn is only fetching $3.63 a bushel. 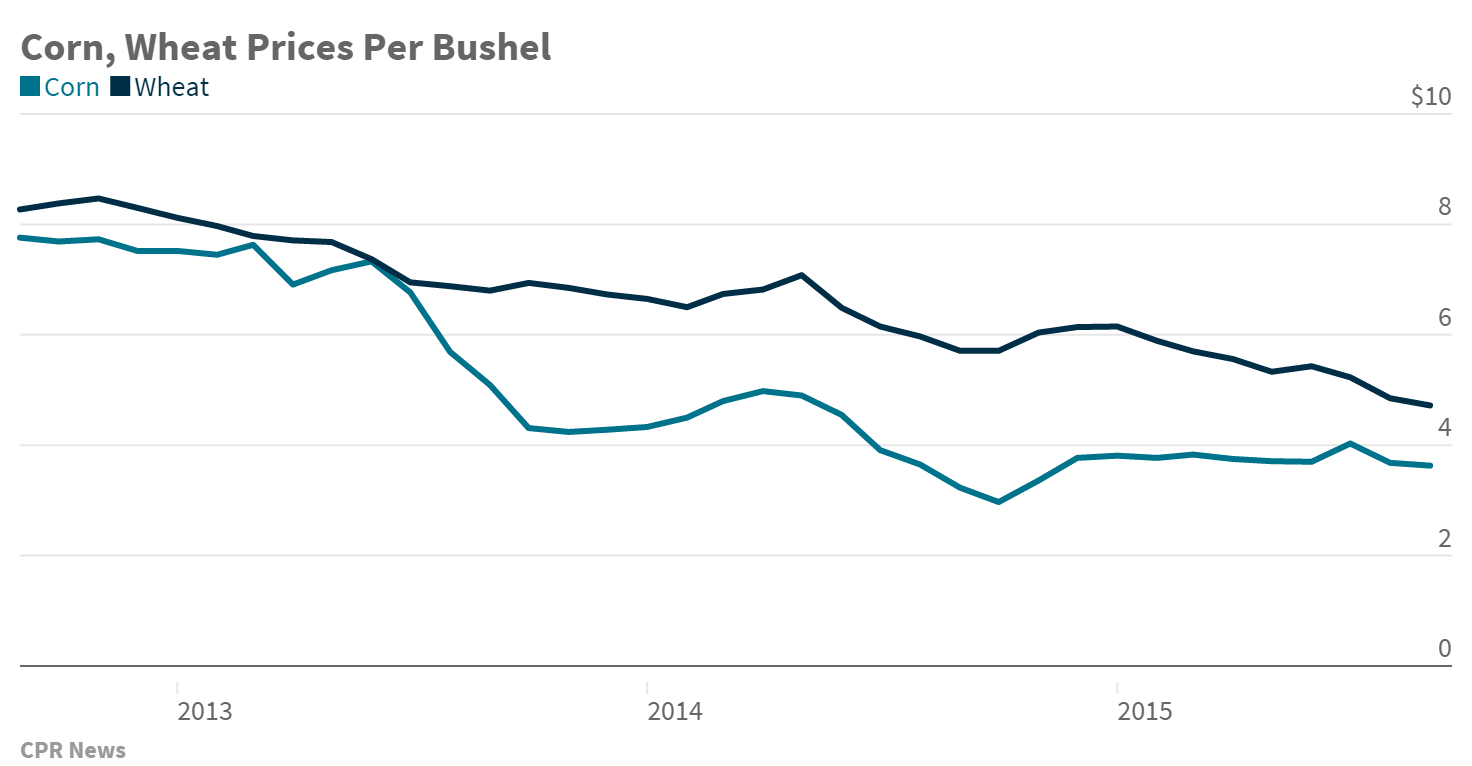 Talk of the recession of the 1980s sends chills through even the toughest farmer, but the pessimism is understandable. Farm incomes are forecast to fall 38 percent just this year, according to the USDA.

Farmers face a double-whammy now. Not only are prices down, but the cost of production has risen dramatically, up nearly 40 percent in the last few years Dalsted says.

It’s too soon to know if crop prices will remain low long enough to damage the farm economy, he adds. “Obviously, there’s concerns, but I wouldn’t say it’s a recession at this point.”

Usually in agriculture when one commodity is down another is up, according to Mike Fergus, of G & M Implement in Greeley.

“But it sure seems like we’ve seen a slump of the entire industry here, in the last year,” says Fergus. As a result, he's forecasting a down year for equipment sales in 2016.

That pain is being felt beyond Colorado. Deere and Co, which makes John Deere tractors, recently laid off 220 employees because demand is off. The Rural Mainstreet Index, produced by Creighton University, reports that farm equipment sales are at an all-time low.

That’s thanks, in part, to banks questioning big purchases like tractors and combine harvesters.

“Capital expenditures are one thing...the bank kind of questions a customer, ‘do you really need to do this when income is tight?’” says Tony Miller vice president of First Farm Bank in Greeley.

Of course, any downturn creates winners and losers, and falling crop prices can benefit banks. Miller says farmers are using their lines of credit again. The USDA reports, nationwide, demand for ag loans jumped, from about $4 billion in 2013, to $5.6 billion this year.

There is a silver lining of sorts for farmers, Miller says. Unlike the dreaded 1980s, interest rates are still low -- despite a recent quarter-percent hike from the Federal Reserve. Also, Miller says he isn't seeing a big rise in loan defaults or bankruptcies as crop production was high.

“The good news this year was, for the most part, yields were pretty doggone good,” says Miller. “So guys got things to sell, the other side of it is there are lower prices to sell those out.”

Good production may have been the only good news this year for farmers like Dave Eckhardt. He’s trying to remain optimistic, but the concern will deepen if commodity prices stay low.

“Like any business you can only afford to hang on so long,” says Eckhardt. “It could be devastating to rural communities across Colorado.”