Colorado's results are nonbinding. But Sanders' win gives him an important boost in a battleground state in his quest for the Democratic nomination.

Sanders generated an impressive turnout among young adults Tuesday in Colorado. But most of Colorado's Democratic Party establishment -- including Gov. John Hickenlooper -- endorsed Clinton and most expect her to eventually win the nomination.

Sanders outspent Clinton by a wide margin in campaign advertising in the state, but Clinton had a formidable organization in place. 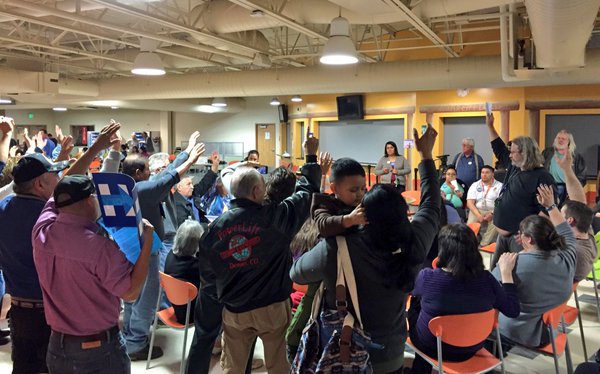 (Ben Markus/CPR News)There were 1,460 delegates on the table nationwide, 865 of them Democrats, 595 of them Republicans. In Colorado, that breaks down to 66 Democratic delegates and 12 super delegates; the Republicans have 37 delegates, but those won't be awarded until the party's national convention in July.

Turnout was heavy. News outlets around the state, including @newscpr, posted images on social media of long lines and packed gathering places.

CPR's Vic Vela, reporting from Capitol Hill in Denver, quoted a caucus staffer there saying turnout was expected to reach at least 1,500. Originally, they expected about 1,000.

The head of Boulder County Democrats, Lara Lee Hullinghorst, tells CPR's Rachel Estabrook that fire marshals "made us stop letting people in" to some caucus sites. "We prepared for high numbers, but nothing like we got."

At East High School in Denver, "there were thousands of people," CPR's Jenny Brundin reports. "There was no room to even sit on the floor." Different precincts met in locations around the school, and "there were at least eight classrooms full or more. They had to open windows or people would pass out. Another precinct met on the stairway inside flowing all the way up the steps, sitting side by side. Another precinct met outside on the front lawn."

Why No Republican Winner?

On the Republican side, there won't be an official winner because the state GOP isn't taking straw poll votes for president. The Republican National Committee now requires delegates in states with straw polls like Colorado's to back the straw poll's overall winner. But the Colorado GOP didn't want its delegates to be bound to a candidate they didn't support in case that candidate didn’t make it to the convention.

GOP faithful turned out to their party caucuses in the tens of thousands anyway, CPR's John Daley reports. At a church in Englewood, south of Denver, where several precincts met, there was a sharp divide between Trump backers and those who won't support him, or would only do so reluctantly.

Spending Pays Off For Sanders

While no candidates traveled to Colorado on this caucus day, it's been hard to miss them on the airwaves. Bernie Sanders outspent Hillary Clinton by more than a 2-1 margin on television ads. About 56 percent of that total for both candidates was spent in the Denver metro area, and about one third of that went to air time on 9News, which saw by far the biggest windfall of political ad dollars among broadcast TV.

Note that Republicans in Colorado and Wyoming caucus on March 1, but do not pick presidential preferences.