Denver city workers in orange sweat shirts and green work vests arrived to clear out homeless camps Tuesday afternoon after people had packed up most of their own belongings and left.

Police accompanied the crews, ushering away passers-by. A half-dozen protesters shouted from across a busy street, accusing the workers of stealing, but no one interfered with the cleanup.

It did not appear that any homeless people were still at the site near the Denver Rescue Mission in downtown's Ballpark neighborhood.

The move comes just days after city officials threatened to remove them to clean the area.

Marcus Parker, who’s homeless, and living in the shelter explained why it was so quiet.

The city says the camps scattered on sidewalks near homeless shelters near Coors Field pose a health hazard, and it has tried to get people living there into shelters for the last six months.

"Anytime you have human waste and refuse and all this stuff building up over the course of months, that poses a public health hazard, and it was approaching becoming a crisis in that area," said city spokesman Jesse Granger.

The encampment in the area started last summer. The city stepped up its outreach and cleanup efforts then, but this week marked a turning point in how the city is approaching the issue.

Parker said the city's action wouldn’t solve the problem, and he predicted the homeless would be back. Another homeless man, who only gave his name as Sam, said shelters can be uncomfortably crowded -- and dangerous. 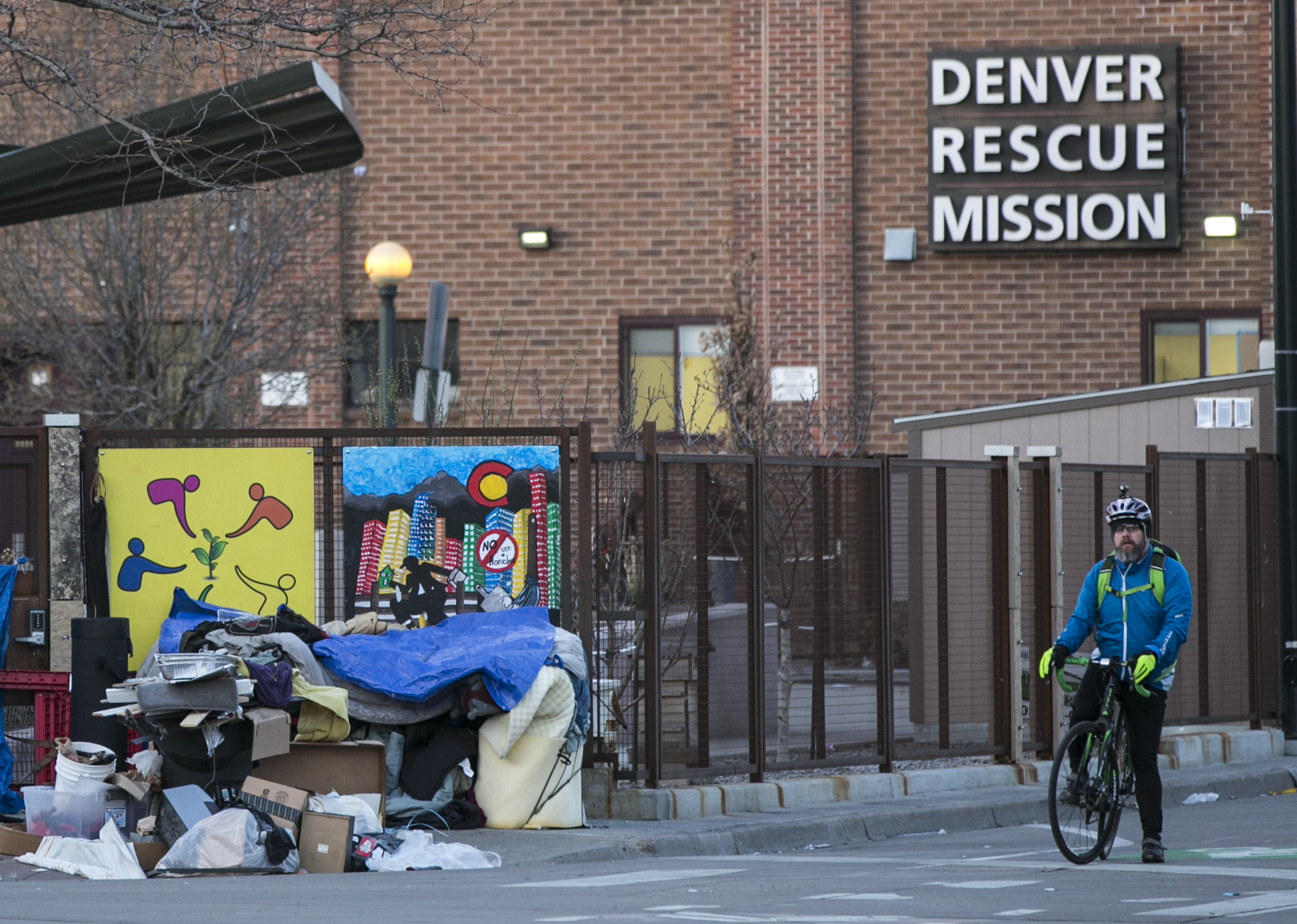 Just across the street from some of the encampments, there are empty beds at the Denver Rescue Mission's Lawrence Street Shelter that can house 315 men nightly. It's running at 90 percent capacity, said Alexxa Gagner, director of public relations for the Denver Rescue Mission. A factsheet from the city said no shelters have been turning people away.

The Rescue Mission has ramped up efforts to get campers to use its shelters since it opened a day center late last year. Gagner says they take security and safety very seriously -- clients must take a tuberculosis test before entering and must shower before staying in the dorms.

Gagner says there are many reasons why some choose to stay outside, such as a family that doesn't want to split up.

Others may not be ready to seek help. Ultimately, Gagner said, the choice to use a shelter is just that -- a choice.

"Someone who seeks shelter is saying, 'Hey, I need some type of help,' " Gagner said. "[But] you can't make anyone do something they may not be interested in doing,"

The non-profit supports the city's efforts to clear the sidewalks.

"We just want to be a good neighbor to everyone," Gagner said. "It's an important step to clean up the area, to maintain a safe community and maintain cleanliness."

Cathy Alderman of the Colorado Coalition for the Homeless says the issue more complex than just getting homeless people into shelter beds.

"Some people don't want to go into shelter because they have a pet and the pet's not allowed. These folks also have belongings that they're not allowed to bring into shelters," Alderman said. "Many of them are suffering from mental health issues, and sometimes a shelter situation can be extraordinarily traumatic for them. So while there technically might be some beds available, that is not the solution, it's not a one size fits all."

John Parvensky, the coalition's president, told the Denver Post last week the city should instead develop more emergence shelter space and services to get the homeless into permanent housing.

In the meantime, the city says it won't permit the shelters to be reconstructed.

"If folks come back to this area and start building their belongings up again, and encumber the sidewalks and limit the ability of folks in the neighborhood to move throughout the area, they'll be met with police and possibly served a citation," Granger said. "If that continues, they could face an arrest. But that's not what we're going for. You know, that's kind of a last resort."

The city recently approved a "social impact bond" program that will house 250 chronically homeless people. That's a drop in the bucket when compared to the nearly 4,000 homeless people in Denver, but Mayor Michael Hancock says its part of a broader effort.

CPR's Ben Markus, Rachel Estabrook and Nathaniel Minor, and The Associated Press, contributed to this report.