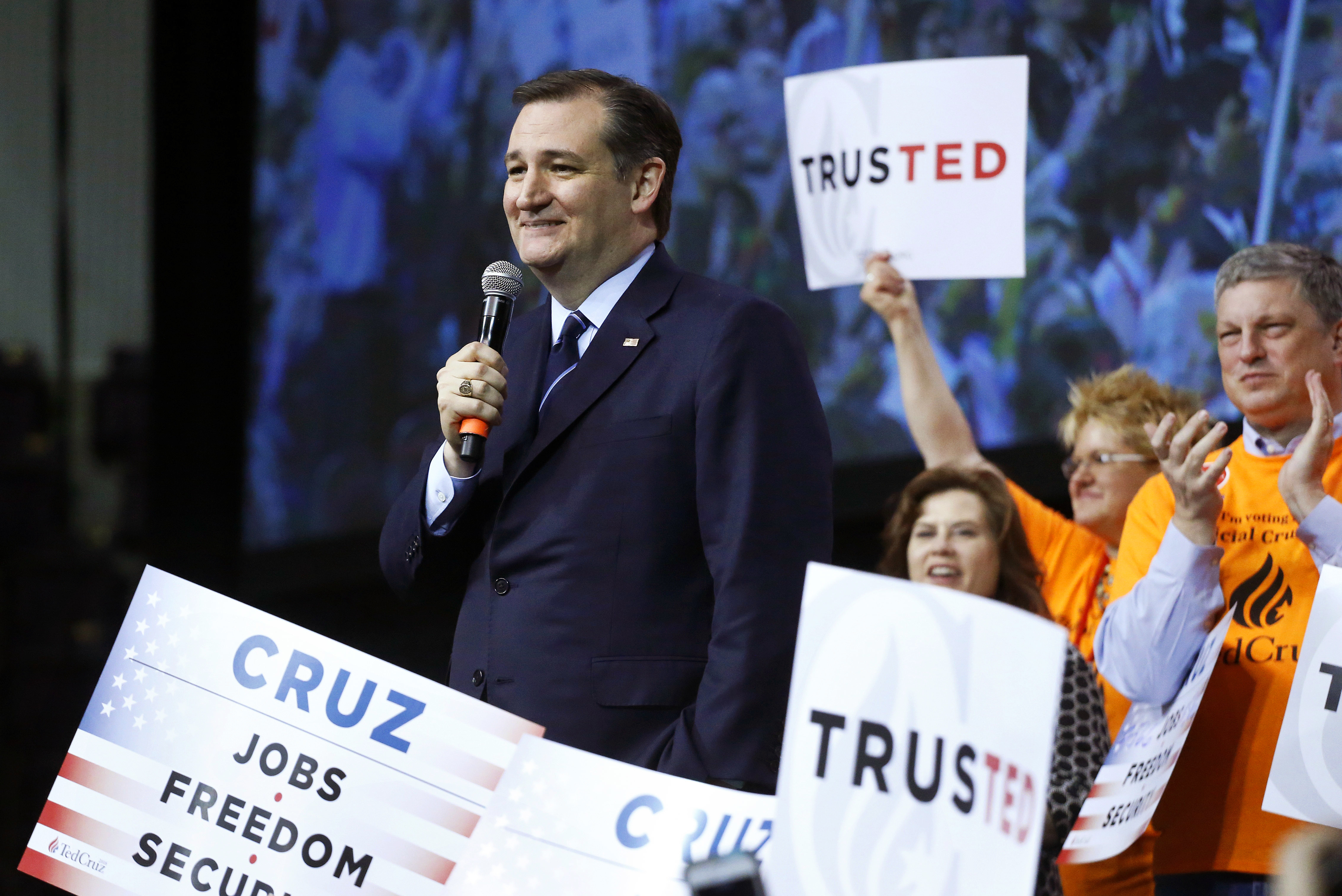 There were 13 delegates at stake at the state assembly in Colorado Springs on Saturday, and they all went to Cruz loyalists. His backers won 21 delegates in the days leading up to the Republican state convention through a separate process in each congressional district assembly.

With about 8,000 party members attending, this was the Colorado Republicans’ largest state convention ever. It’s the first time a presidential hopeful addressed a Colorado GOP convention in decades. 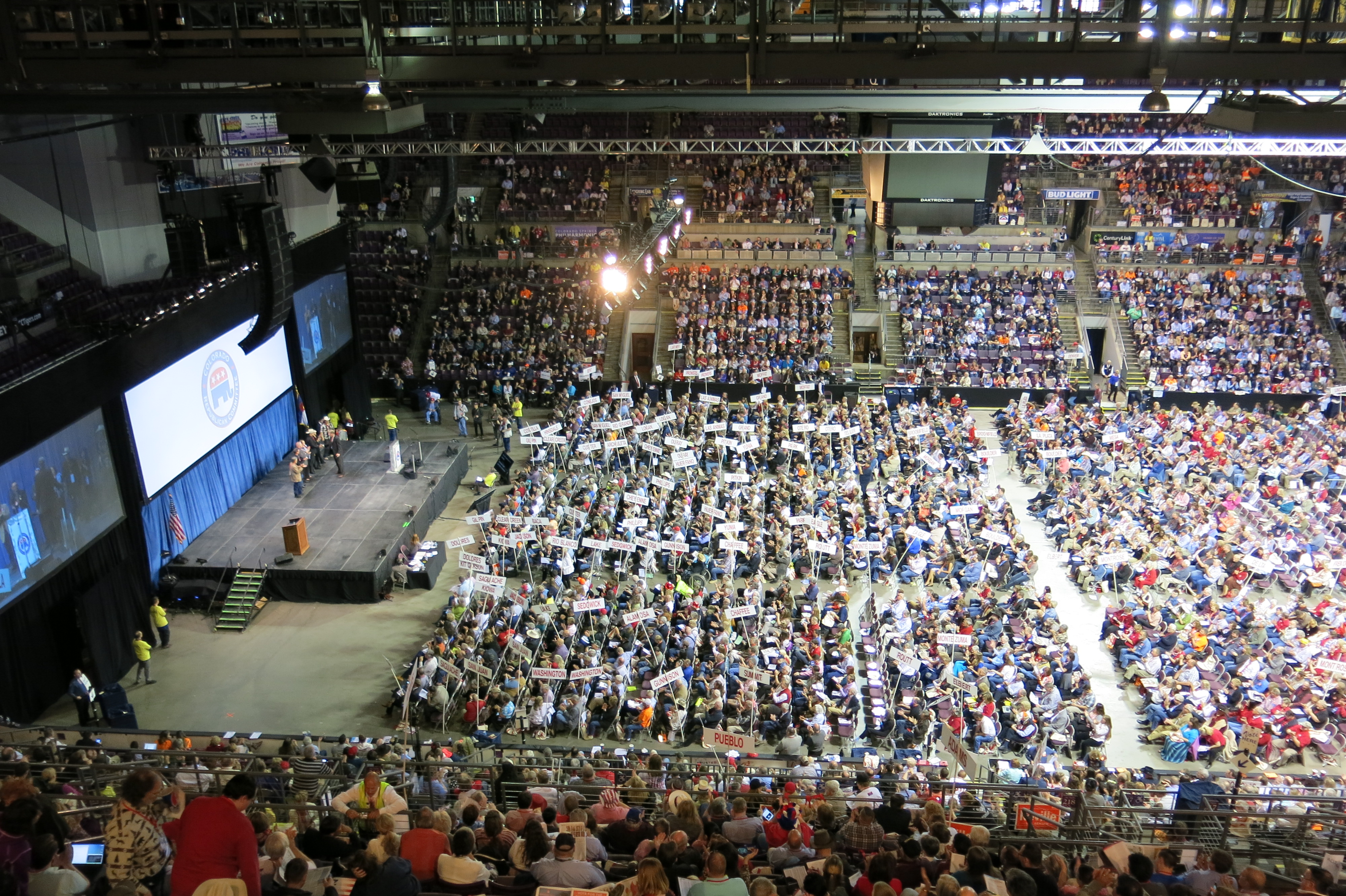 (Megan Verlee/CPR News)The audience was roaring along from the moment Cruz started his speech, opening with “God bless the great state of Colorado!” Past that, most of what he said was from his standard stump speech: vowing to repeal Obamacare, protect gun rights, and nominate conservative Justices to the U.S. Supreme Court. Then, he turned back to Colorado and his victory in the delegate races here, and connected it to his other recent electoral victories.

Organization was key to Cruz’s victory in Colorado. His supporters didn’t just have handpicked slates of delegates available at the assembly; they worked to it as easy as possible for convention-goers to know their names when it came time to vote. 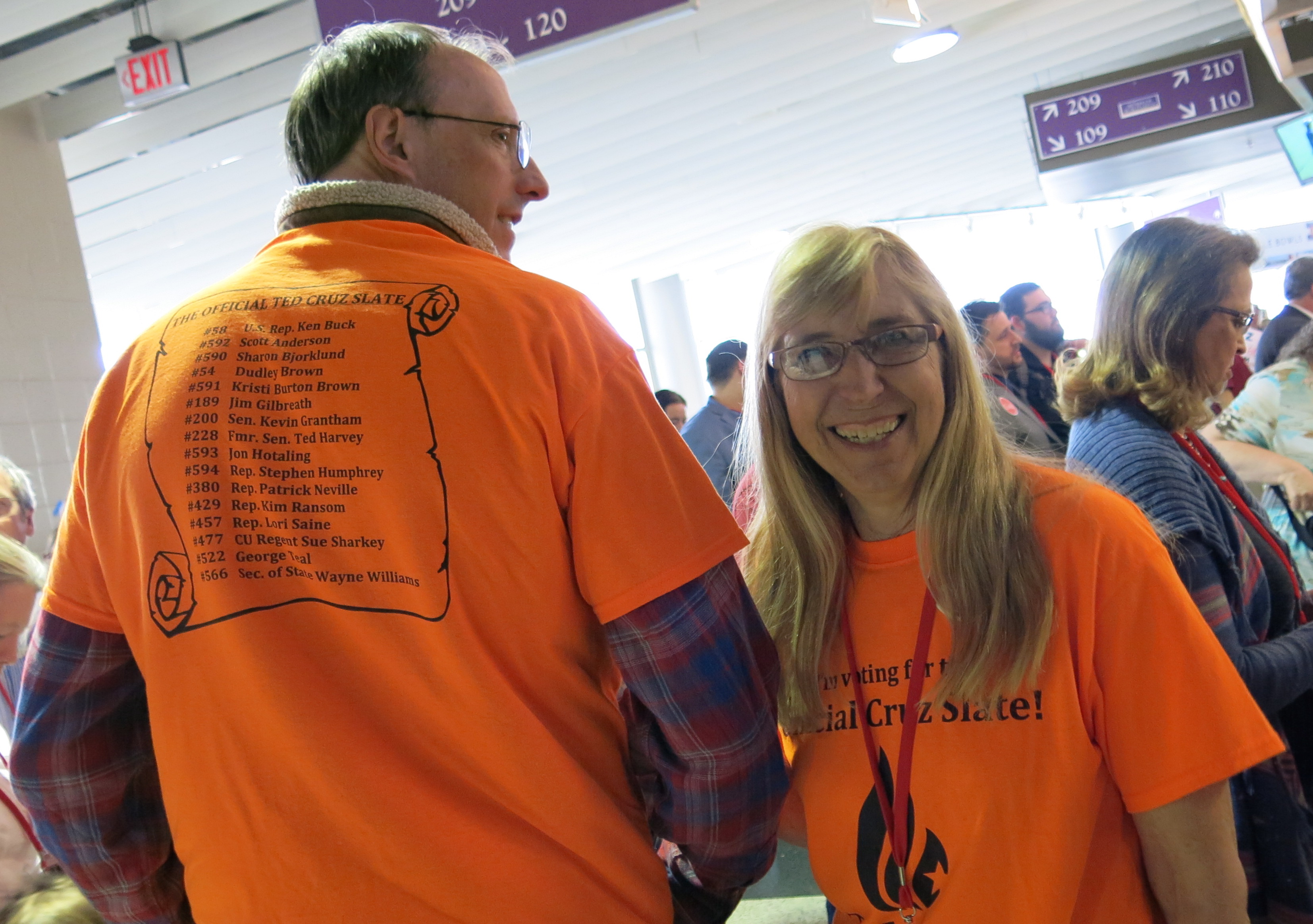 (Megan Verlee/CPR News)His volunteers made a splash in the convention crowd, wearing bright, Broncos-orange T-shirts with the names of their delegate slate on the back. The blaze orange seemed to be the new red for Republicans — several campaigns had their volunteers in the Broncos’ color this weekend.

“[People have] asked me to stand there so they can write down the names,” said Diane Paulson of Telluride, who was wearing one of the T-shirts. “It’s like a walking advertisement; it’s like having a sandwich board on you.” 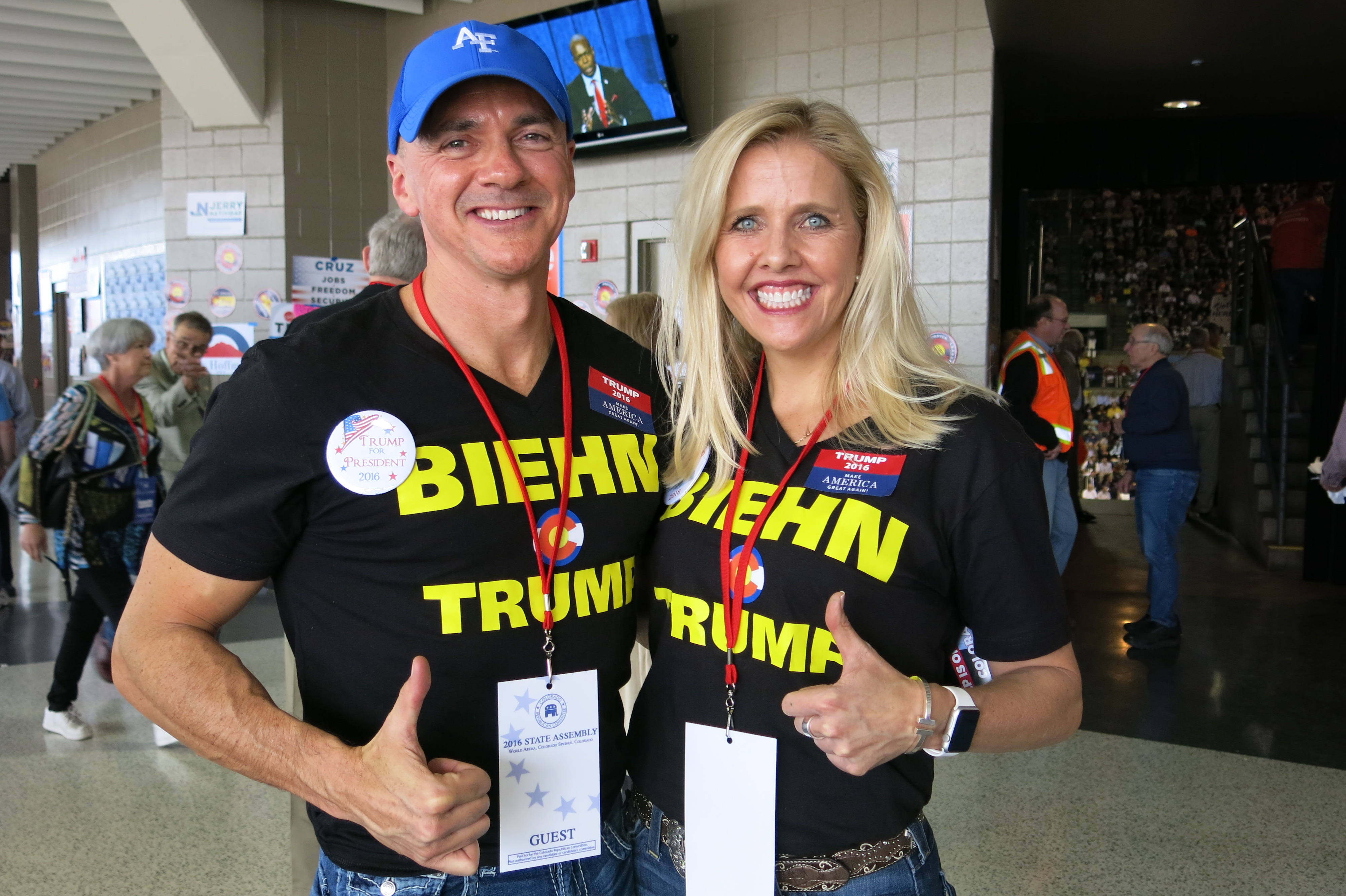 (Megan Verlee/CPR News)Denverite Jennifer Biehn ran as a Trump-pledged delegate. The Denver resident is an executive headhunter and says Trump impresses her as a businessman. And she’s wary of what may happen at the Republican National Convention in Cleveland.

Although Trump leads in the delegate count right now, a growing number of Cruz victories mean there’s a real chance of a brokered convention because Trump may not have enough delegates to win the nomination outright.

While Cruz was in Colorado Saturday, Trump visited the National Sept. 11 Memorial and Museum in New York City.

“If he’s treated poorly by the RNC, I will dump my Republican status in a heartbeat,” Biehn said. 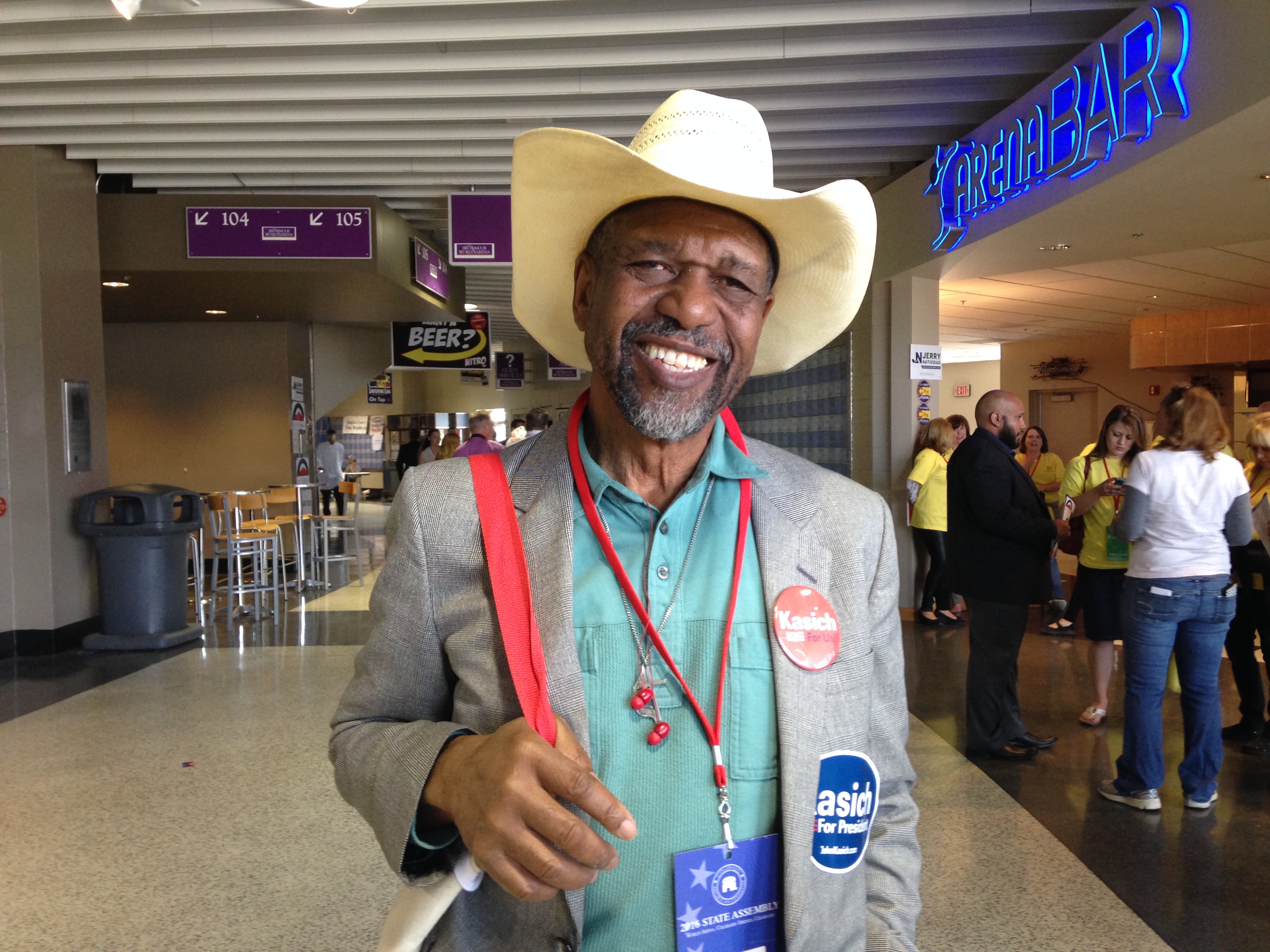 (Mergan Verlee/CPR News)There were also a few Kasich supporters on hand. Denver resident and Kasich supporter King Harris a long-time Republican but had never come to a state assembly before. This year though, he said the tone of the Republican primary races motivated him to get involved. And he explained his feelings by looking back to something Ed Brooks, the first African-American senator said.

“He once was asked why he wasn’t enthusiastic about what was happening in the party and he said, he didn’t leave the party, the party left him. Rather than have the party leave me, I’m coming back to claim it,” Harris explained.

But Trump and Kasich supporters were clearly in the minority on Saturday, since none of their supporters made it into Colorado’s delegation. 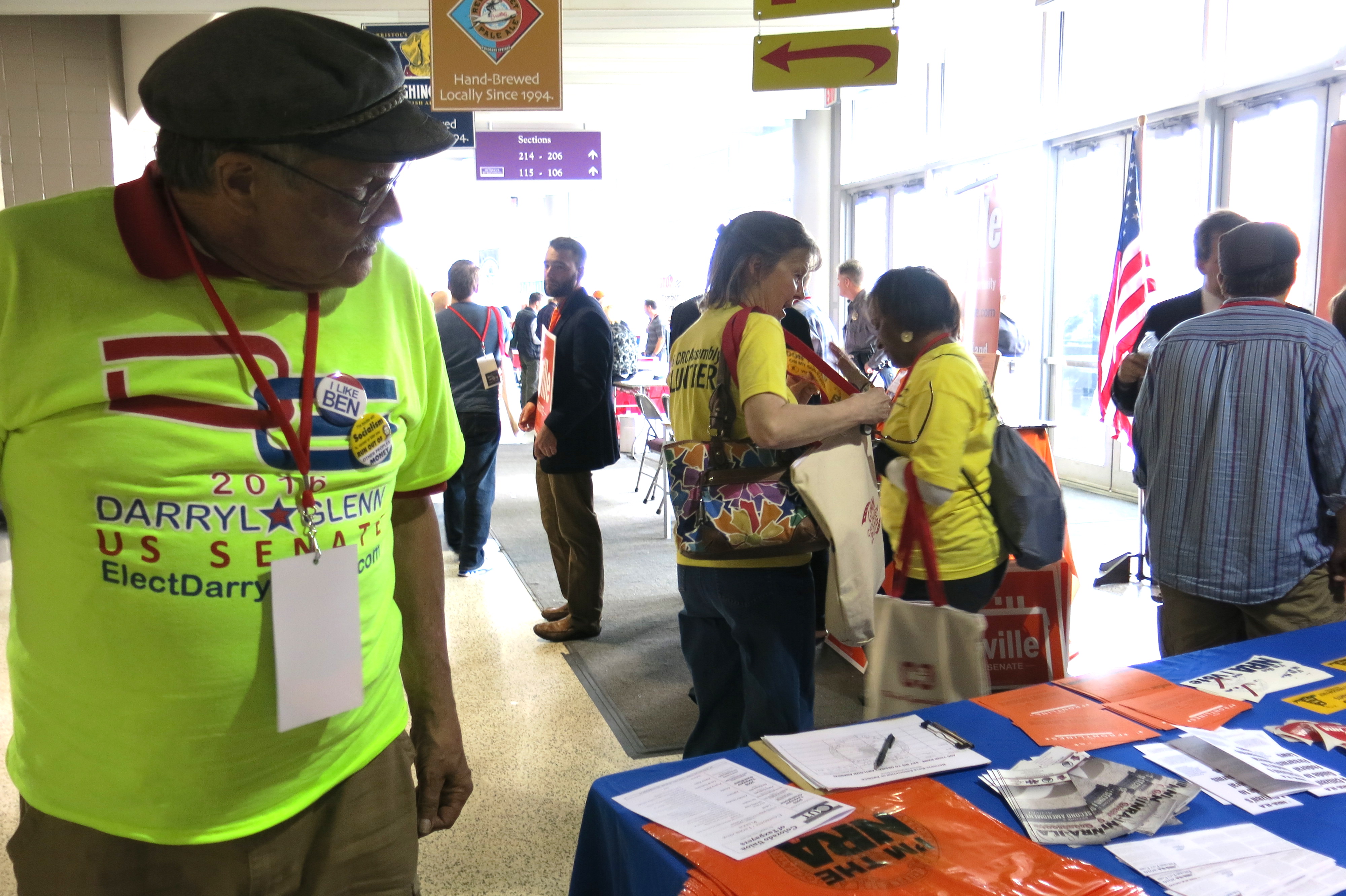 (Megan Verlee/CPR News)Republicans also voted on which candidates should appear on the primary ballot for federal offices. Ten would-be Senate candidates came to Saturday’s assembly hoping to get enough support to get on the ballot to challenge incumbent Democratic Sen. Michael Bennet. Of the 10, only one prevailed; El Paso County Commissioner Darryl Glenn won in a landslide. No other candidate reached the 30 percent threshold necessary.

The result marked the day’s biggest upset. State Sen. Tim Neville was backed by the influential group Rocky Mountain Gun Owners and was widely seen as the favorite to prevail in at the assembly. But he ended up drawing only a fraction of the support he needed.

Four other would-be candidates have opted to bypass the assembly route and are petitioning to get onto the ballot.

From here, things should be quiet until the delegates go to Cleveland in July. And then if it is a contested convention, CPR News will pay close attention to whether Colorado’s delegates hang with Ted Cruz or switch under pressure.

Also, while the Republicans are done with their process, Colorado Democrats meet on April 16th in Loveland to pick their national convention delegation. That gathering is likely to be marked by tension between Bernie Sanders and Hillary Clinton supporters.

Sanders won neighboring Wyoming's caucuses Saturday, but the win isn't likely to help him make up much ground in the delegate race.

Her edge over Sanders is even greater when you count the party insiders known as superdelegates.