The first floor of a stately mansion in Capitol Hill is packed with a well-dressed crowd. But this isn’t just any cocktail party for the well-heeled; it’s an event for Denver District Attorney candidate Beth McCann.

She eventually addresses the crowd. She says she was a former deputy district attorney and manager of safety in Denver. Most recently, she’s been a state representative focused on criminal justice issues. Then she gets to the nitty gritty reality of this campaign.

The bit about children draws a big laugh from the crowd.

This Democratic primary between McCann, Michael Carrigan and Kenneth Boyd is likely to decide who the next district attorney will be in this heavily Democratic city. It’s a coveted job that's open for the first time in 12 years now that current District Attorney Mitch Morrissey is term limited.

The race to replace him is already about three times as expensive as last time there was a competitive run for the office, with more than $1.5 million raised by the candidates so far. It's by far the most expensive race in the state in this election cycle so far, excluding federal contests. 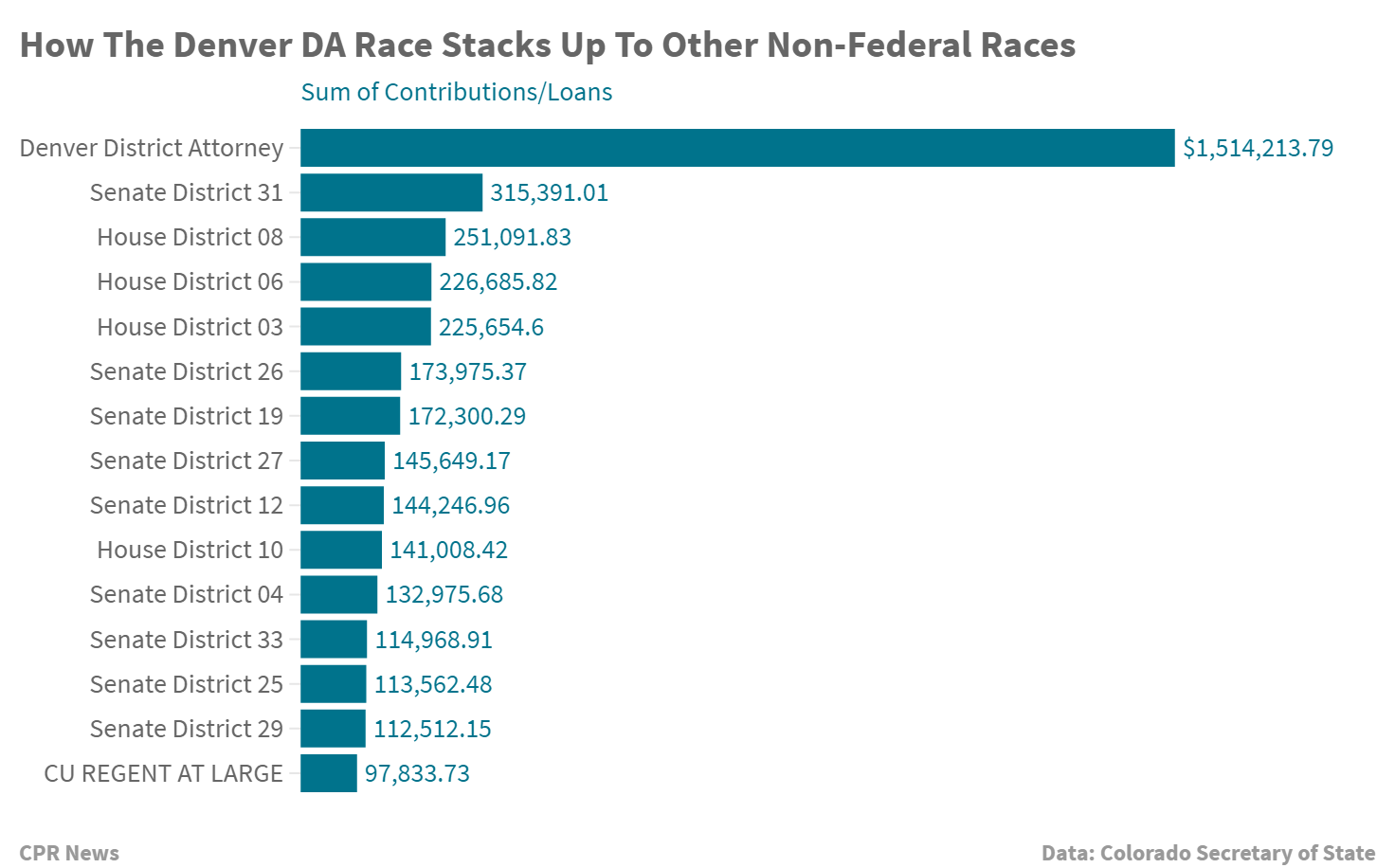 “I have to tell you, I’m surprised by the amount of money myself,” said McCann, in an interview at her home in Congress Park. “It’s a lot of money to spend on a race like this.”

She said running a city-wide campaign is expensive, especially running ads in the Denver TV market. But she said donors are also excited about bringing change to the district attorney’s office. Current DA Mitch Morrissey has been the subject of community scorn for not prosecuting officers who’ve killed or beat civilians while on duty.

“We really need some changes in the office,” said McCann. “And this is the time, when we have this opportunity to bring someone in who’s had a much broader experience and has been doing criminal justice work over the years.”

Frankly, there isn’t a lot policy-wise that separates McCann and her opponents. All want to divert non-violent offenders from lengthy jail sentences, beef up crime prevention, and be more transparent about excessive force decisions involving law enforcement.

It’s their background that distinguishes them. Michael Carrigan, for instance, is a senior partner at a top corporate law firm in Denver. He said that experience is invaluable.

“The DA runs what is equivalent to the 10th-biggest law firm in the state -- 78 lawyers, 125 staff, $23 million budget,” said Carrigan, who, like McCann, was a deputy DA in Denver and is a University of Colorado regent.

Carrigan’s connections to the corporate world have helped his fundraising. He’s raised more than both his opponents combined.

“It’s a vote of confidence that I have raised a lot more money than anyone else,” argues Carrigan. “People have heard my message of change, having a smart modern approach to public safety, and they like it.”

It’s believed that Carrigan is the only candidate backed by an independent expenditure committee, Colorado’s version of a Super PAC. The Citizens for a Strong and Fair People’s advocate has just a handful of donors who have given a total of $92,201. Frank Azar, a personal injury attorney has given $50,000 through a holding company based in Texas, as first reported by the Colorado Independent.

For his part, Carrigan said the money doesn’t change his stance on the issues or his integrity. “If there are individuals and groups who agree with my platform, it is their right to show their support. I am beholden to no one.”

Money or not, McCann and Carrigan can run on a change platform because they haven’t been in the office for a long time. That’s a little harder for Kenneth Boyd, who works in the DA’s office now, and he has the endorsement of his soon-to-be-former boss.

“Let me make this absolutely clear, I am my own person I have my own agenda that I want to see moving forward, I have my own policies,” said Boyd.

Boyd does have a unique idea for handling excessive force cases. He proposes a public fact-finding review, modeled on a system in Las Vegas. His opponents, meanwhile, say they’ll focus on improving communication and relations with the community.

Carrigan and McCann have served in the district attorney’s office, but Boyd said there would still be a tremendous learning curve for either if they took office now.

“Beth has been out the office for 30 years and Michael has been out of the office for over 15 years,” said Boyd. “The way that we prosecute a domestic violence in 1982 versus all the different things we do in 2016 in terms of the way we engage victims, the services that are provided -- it’s completely different.”

One thing that isn’t different: there will be plenty of scrutiny from community activists like Alex Landau, who himself was a victim of excessive force by Denver Police in 2009. He eventually was awarded an $795,000 settlement from the city.

He said if the DA doesn’t want to hold cops accountable, then he has no qualms about trying to recall anyone in the job.

“They should not get the idea, comfortable in their heads, thinking that, ‘I’ll be here for the next 12 years,’ because if we as a community don’t want you there we can work to recall,” he said.

The winner of the primary on June 28 will face an independent candidate, another deputy DA from the office, in the general election.