Another December, another Census Bureau report that shows Colorado among the top 10 fastest-growing states in the country.

"We've probably, maybe, reached our peak growth that we'll see in terms of total population change," state demographer Elizabeth Garner said, but she still expects the state's population to rise at a slow to moderate clip in the coming years.

Garner said her office expected to see a small decline from the last report. Population growth is closely tied to job growth and part of Colorado's economy has taken a hit recently.

A drop in oil prices led to layoffs in the energy sector. That was reflected in the population data, Garner said. But she noted that growth in business and health services help offset those losses.

"I think we can say that we are diversified," Garner said. "Or at least a lot more than we have been historically. The downturn in the oil and gas industry has really impacted a lot of other states and Colorado has weathered it well."

Migration is an important part of Colorado's economy, Garner said. There were about 30,000 more births than deaths from 2015 to 2016, accounting for about a third of the state's population growth. Inward migration makes up the remaining two-thirds.

Those migrants tend to be younger and whiter than the rest of the state's population, Garner said. And they tend to move to places in the state where the economy is already thriving, like the northern Front Range.

"As long as we're a competitive state and we're a place that people want to see opportunities, we will continue to see this in-migration," she said. "Being able to attract those young adults is great."

While Colorado's recent boom may feel unprecedented, the state grew at roughly twice the same rate in the 1990s. 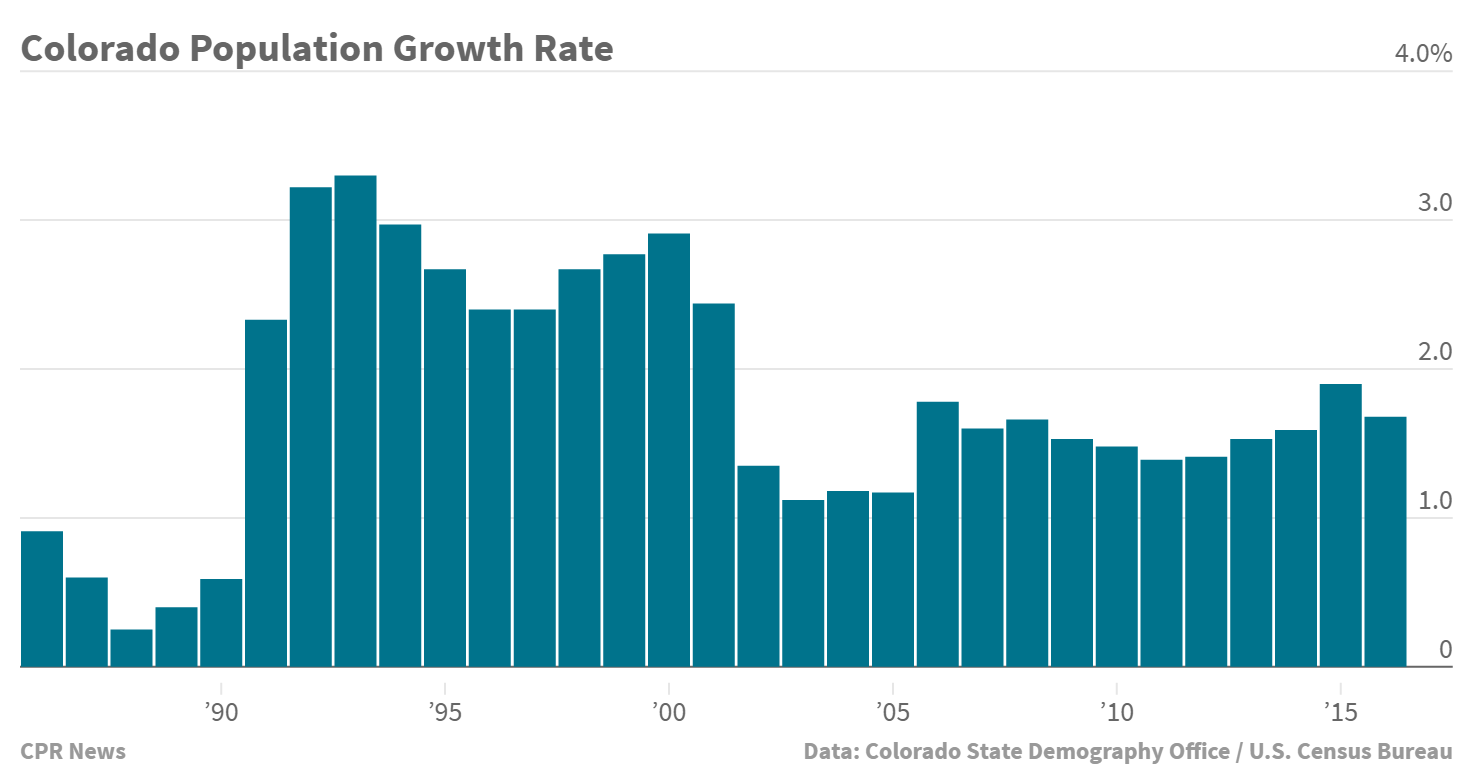 But back then, the state's population was around 3.5 million. So a growth rate of 3 percent translated to roughly 100,000 people. These days, with a population of more that 5 million, 100,000 new residents in a year means a growth rate of just half of that.

There are other key differences between the 1990s boom and Colorado's current one. The Denver metro area had plenty of available housing 20 years ago. That's certainly not the case now. Traffic was not the issue it is now. Back then, fewer of Colorado's new residents landed on the Front Range.

The notion that Colorado is full is incorrect, Garner said. The Front Range is not as densely populated as many other places in the U.S., like the East Coast. While it might be painful for some, Garner said adding density would be one way to accommodate new residents -- though more demand for water on the Front Range presents its own challenges for the rest of the state.

The challenges of growth will only become more pressing; Garner's office estimates the state's population will reach nearly 8 million by 2040.