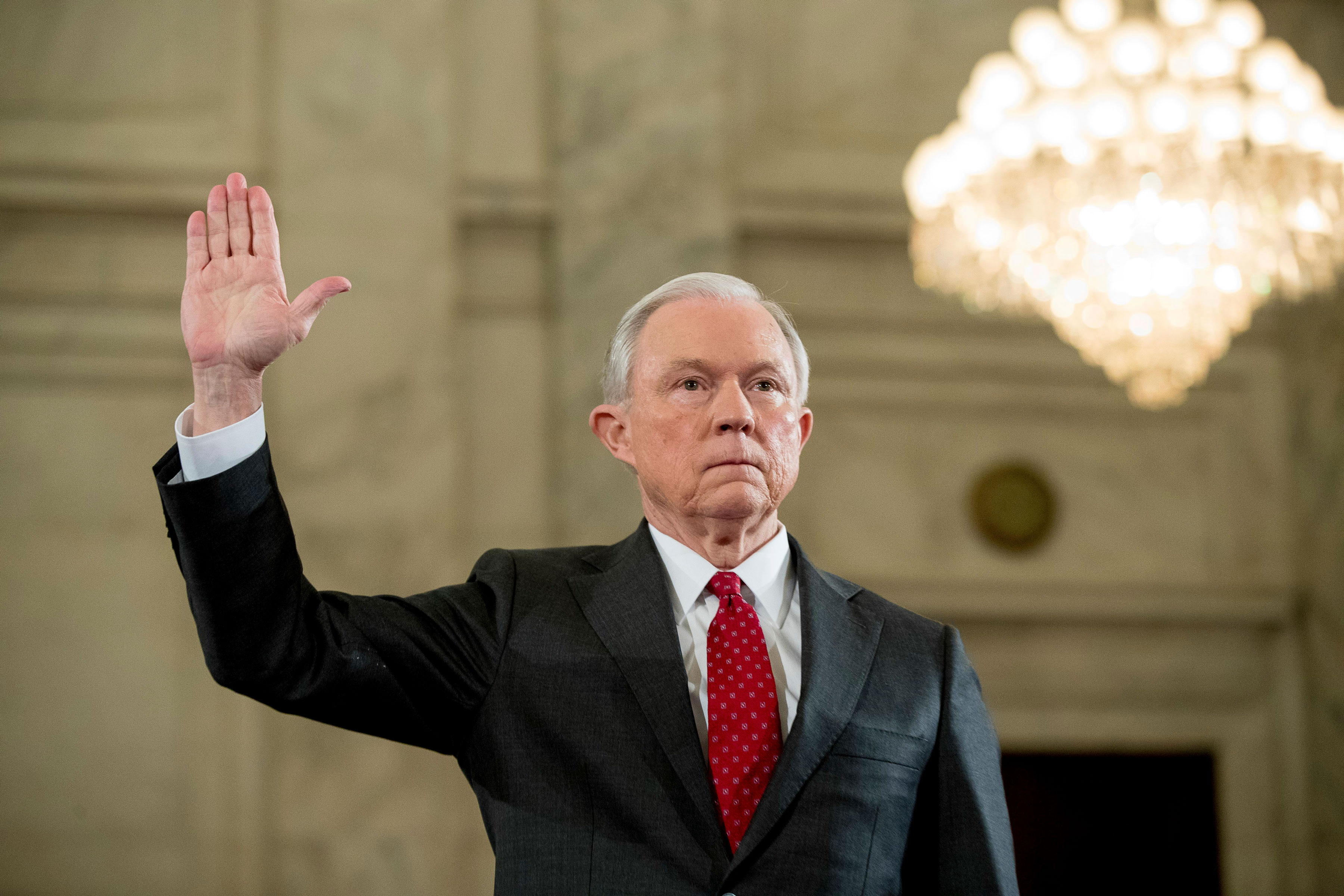 Andrew Harnik/APUpdate 2:16 p.m. 3/02/2016 - In a statement released during an afternoon news conference from the Department of Justice, Attorney General Jeff Sessions recused himself from any "existing or future investigations of any matters related in any way to the campaigns for President of the United States."

NPR has more from the AG's news conference. Our original story continues below.
--

The Washington Post has reported — and NPR has confirmed — that then-Sen. Sessions spoke to Russia's ambassador twice in 2016 when Sessions was a top adviser and surrogate for Donald Trump's presidential campaign.

As NPR reported, during his confirmation hearing Sessions told the Senate Judiciary Committee that “I did not have communications with the Russians” during the campaign.

“I think we have to understand what exactly happened and I hope Sen. Sessions, Attorney General Sessions, will come forward and outline exactly what the conversation was, talk about the substance of the meeting and help us understand why it wasn't brought up before the committee,” Gardner told NPR Thursday.

In a statement released by his office, Bennet said that, "At a minimum, Jeff Sessions should recuse himself and appoint an independent prosecutor to investigate Russian involvement in the 2016 election and connections to the Trump campaign.”

Some of Colorado’s U.S. House members are also weighing in. Republican Rep. Mike Coffman said Sessions made a “grave mistake by not disclosing his meetings with the Russian ambassador.” Democratic Rep. Dianna DeGette's statement said that, "If these revelations are true, he has perjured himself. In any case, given what we now know, the Attorney General should resign immediately or be removed.”

Senate Minority Leader Chuck Schumer of N.Y. has called on Sessions to resign.

Here’s the transcript of Gardner’s interview with NPR’s Rachel Martin on Morning Edition:

Martin: Does it concern you that Jeff Sessions had these meetings but didn't acknowledge them in his confirmation hearing?

Gardner: I think we have to understand what, exactly happened and I hope Senator Sessions, Attorney General Sessions, will come forward and outline exactly what the conversation was, talk about the substance of the meeting and help us understand why it wasn't brought up before the committee. There could be a reason this was not connected to the campaign, but there are questions on whether it was. So let's have full and open transparency and get to the bottom of it.

Martin: How is it different from the situation with Mike Flynn, the former National Security Advisor?

Martin: Jeff Sessions runs the Justice Department, which is in charge at this moment of investigating Russia's interference in the U.S. election. Some of your Republican colleagues are calling on Sessions to, at the very least, recuse himself from that investigation. Do you think he should?

Martin: But how do you get to the bottom of those questions if it's Jeff Sessions essentially investigating an issue in which he is now embroiled?

Gardner: Well again, I think the FBI has done, and proved themselves over the years, of doing a good job of making sure they can find an independent investigation and the grounds for it. If we have more information that changes that, then of course I think there will be a call to do something different. But, you know, when you go to a judge, a judge doesn't issue the verdict before the trial. Let's figure out the facts here before the next call for action.

Martin: Do you think a special prosecutor should be appointed to take the investigation over?

Gardner: Again, I think let's get the facts here, let's start and finish the FBI investigation. The Intel committee continues to work on a Russian probe. Let's get the information before we start taking other steps.

Martin: But so you support the committee finishing its investigation?

Gardner: Well, the committee should finish its investigation. But if something comes up in the meantime that changes the facts as we know them, we can always make a determination to do something different in this investigation.

Martin: Sean Spicer, White House spokesman, has insisted that there's nothing to see here, folks — essentially that there's no need to finish an investigation. Would you disagree on that?

Gardner: Well again, I think the investigation will show us that. If it's the direction the investigation concludes with, then we'll know that Sean Spicer was right. If there's different information or a different conclusion from the FBI or the Intel committee, then clearly he was wrong.