Diego is a high school student in Grand Junction and he has a lot at stake right now, along with about 17,000 other young people in Colorado granted temporary relief from deportation by the government.

Like them, Diego was brought to the U.S. illegally as a child -- in his case, from Mexico. This story does not use Diego’s real name.

He and his family have cause for concern, because of a presidential race in which then-candidate Donald Trump made talk of undocumented immigrants, increased deportations and a bigger border wall a centerpiece of his successful White House campaign. As part of that campaign he promised to cancel the Deferred Action for Childhood Arrivals program.

Now as president, Trump keeps pushing for the border wall with Mexico, but says DACA kids like Diego have nothing to worry about. The messages are mixed, but if they hover like a cloud over Diego, it can be hard to tell.

In many ways, Diego is a typical student poised to graduate from high school next year.

His life in Grand Junction revolves around school, soccer, and work. Each day after class and on Saturdays, he serves customers at a local fast food restaurant. He watches and plays soccer on Sundays (he scores more than normal for a defender, he says, because of his unusual height). He’s woven into the fabric of the community.

Before his next adventure following graduation, Diego plans to see through a project in his neighborhood he’s invested a lot of time in.

"They’re remodeling the park," he says, pointing to a grassy area on the edge of his neighborhood with a swingset, benches, and picnic tables. "I’m part of that. I came up with the idea and it’s going to be an expanded park."

The community group, mostly made up of students, will ask the state for money to finish the project. Chances are good that Diego will make a strong case for the funding: His friends tease him about his ability to argue about almost anything. 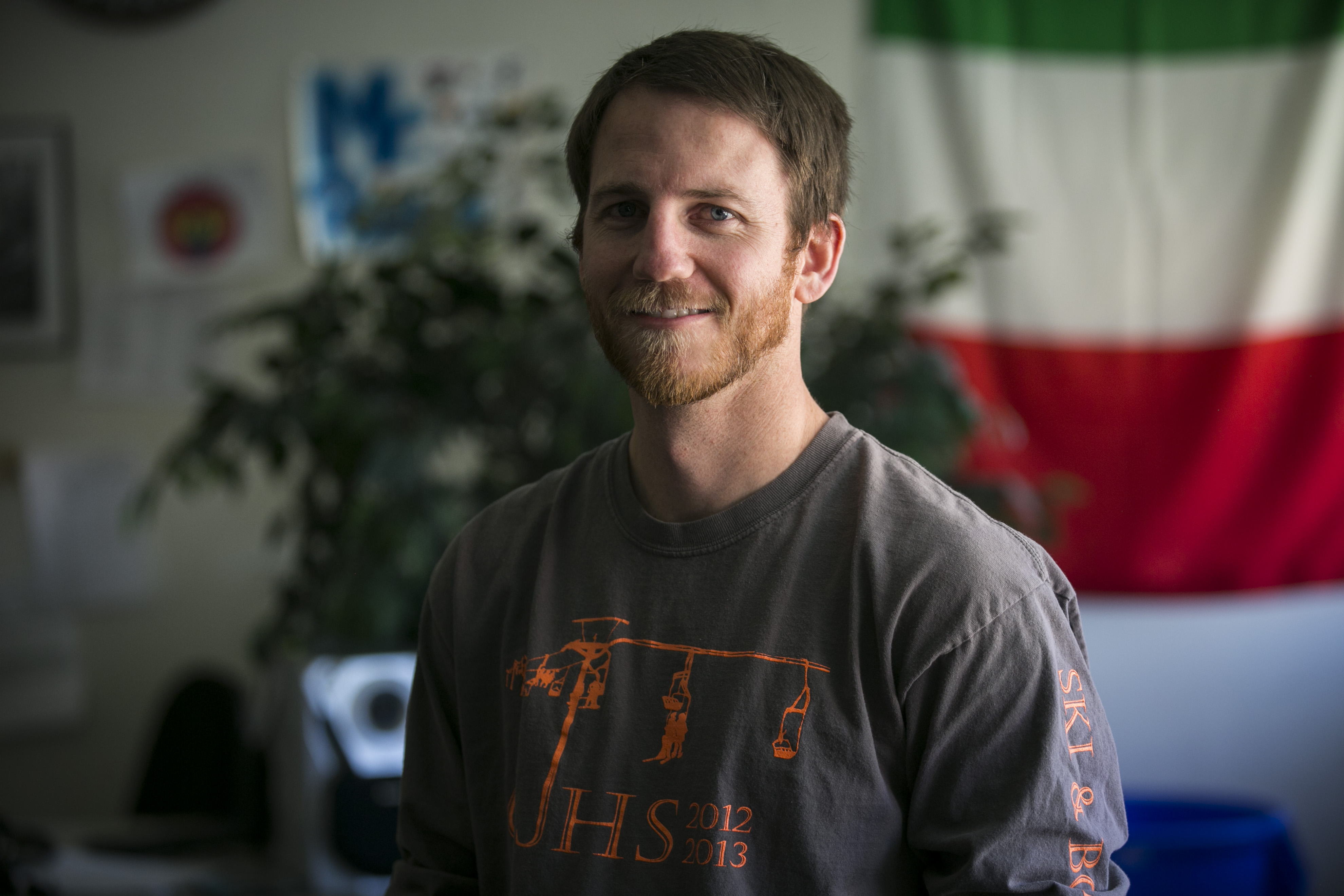 Frequent sparring partner and Grand Junction High School social studies teacher Mike Pacini would agree. Diego spends many of his free periods at school visiting Pacini's classroom to talk about history and current events, and to help younger students with their assignments.

"I'm trying to convince him to join the academic team because he just remembers everything he hears the first time," he says. "He'll read an article one time and then two years later tell me, 'I read that.'"

Pacini adds that Diego "actually teaches me a lot just because he's really curious about things."

Down the hallway from Pacini’s classroom is English as a second language teacher Cheyanne Gentry. Diego doesn't need the class anymore, but Gentry says, "he comes in, every once in awhile, just to sit and talk to the other kids, and I say, 'That could be you! Get your English up. Get your grades up. You can do this.' So he's a fabulous role model for the kids." 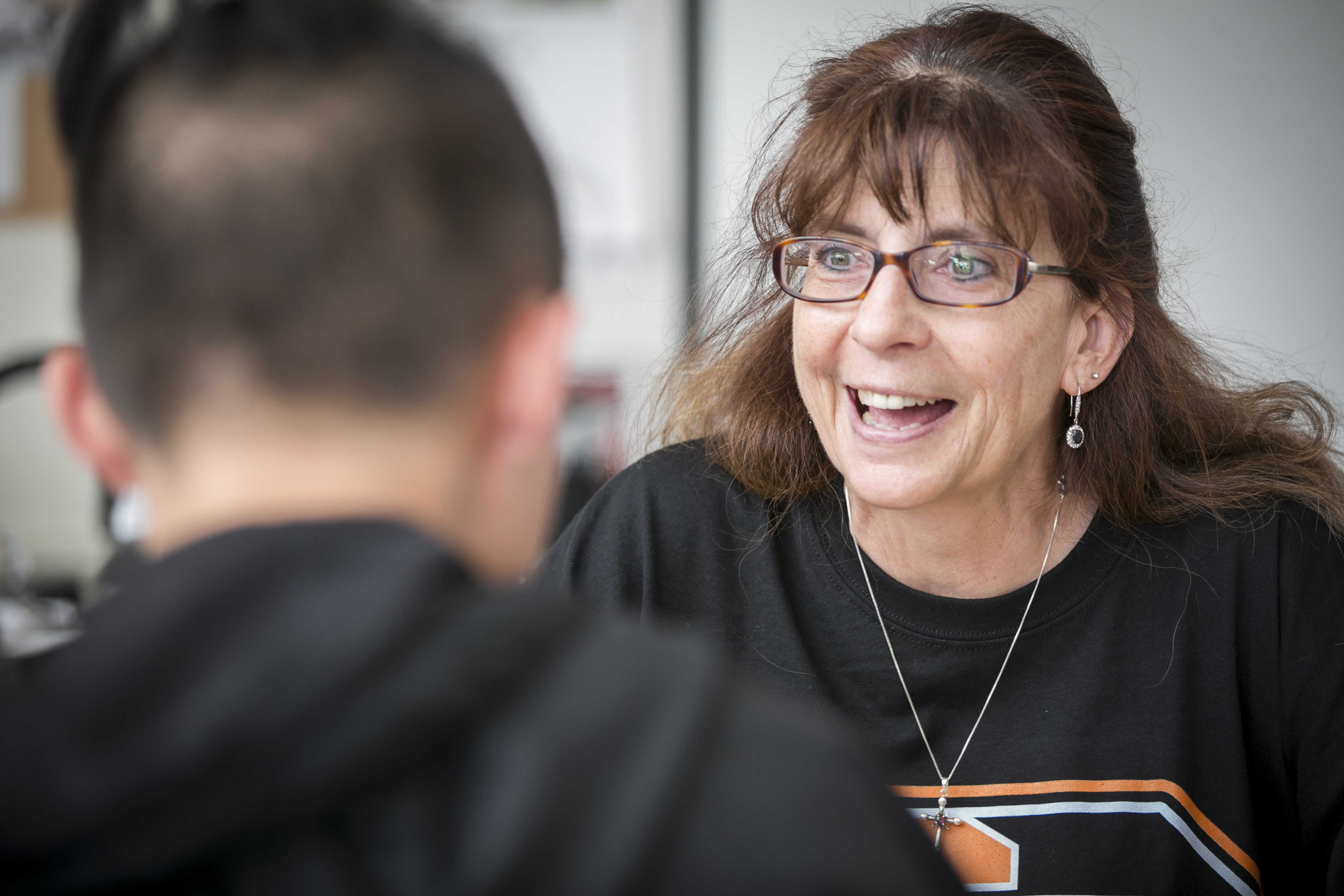 The fact is, Diego is both -- at least unofficially. He hopes to make it official before long.

Big Plans For The Future

Any change to Diego’s immigration status upends the future he -- and his teachers -- have laid out. His teachers playfully argue, but with conviction, over what Diego should do with his life. They say he’s grown a lot since freshman year, and while he probably won’t be the school’s valedictorian, he has skills that will serve him well.

Diego’s congeniality and willingness to work hard inspire Jeffrey Hansen, a teaching student apprenticing in teacher Justin Whiteford's comparative religions class to tell Diego that “one day he’s going to be mayor of Grand Junction.” Hansen and Whiteford agree that Diego can "count on our vote." 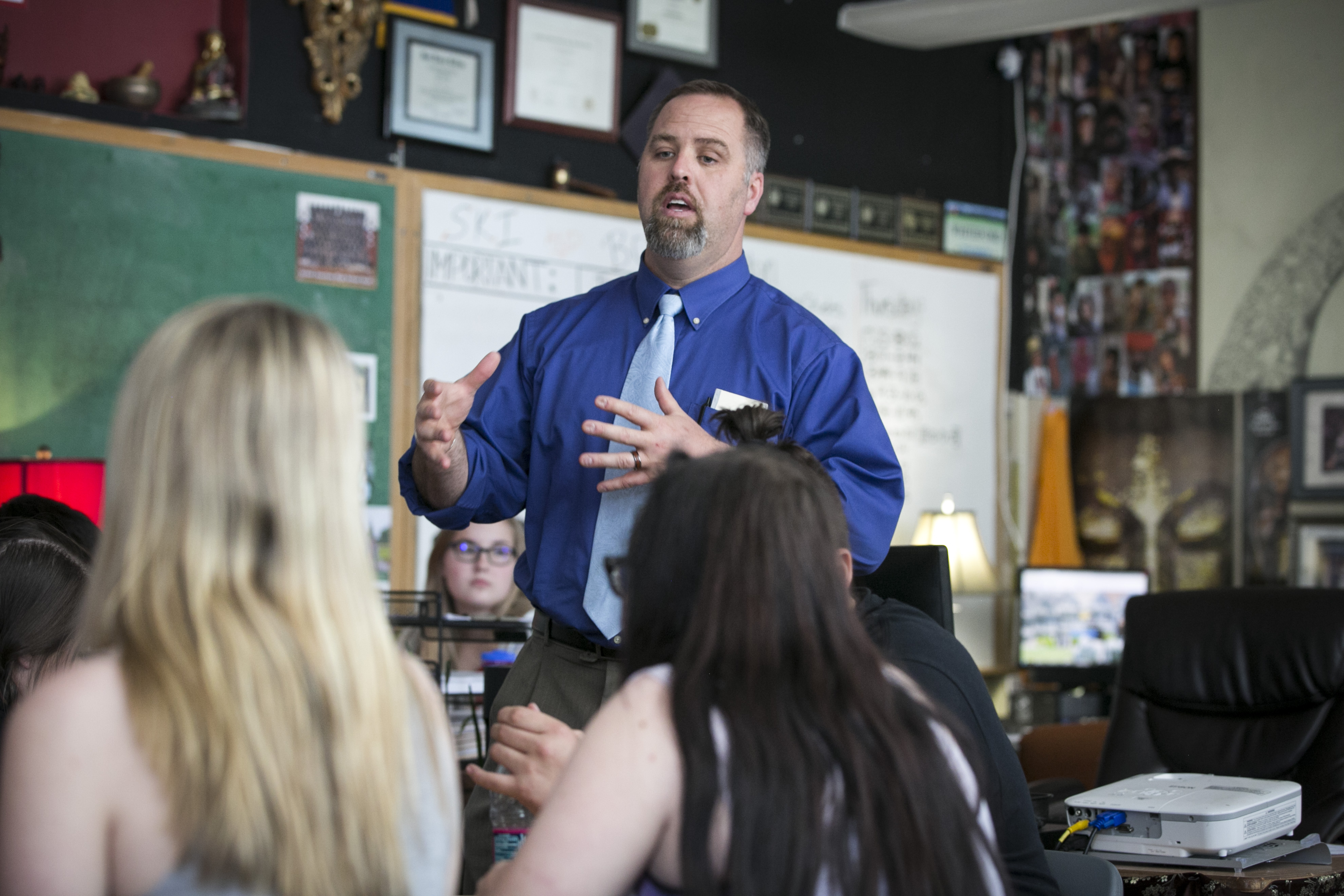 Pacini, the social studies teacher, envisions Diego at law school and has “tried to convince him to get into immigration law just because he’s a really good orator."

Diego’s parents are voting for medical school, and he likes that idea, too. But first, he has other plans to ensure he can stay in the country long-term.

DACA was created by order of President Obama, and can be eliminated the same way by President Trump. It's explicitly not a path to citizenship. Diego has looked at how he could get citizenship, and chose what he believes is his best route: He plans to join the military.

"The whole fighting part is scary," Diego says. "But it's OK. I think everyone goes in scared. But you'll get used to it after a while. I'm hoping."

He wants adventure and likes that he could travel the world and not have to pay for it. His eye is on a pre-med program in the Navy.

Diego is correct that going into the military may be the easiest -- and one of the only ways -- he could get a green card and then become a U.S. citizen. Other routes to citizenship don’t apply to him: He can’t be sponsored by his parents, since they’re not citizens themselves. He isn’t married to a U.S. citizen. He doesn’t have any U.S. citizen children. 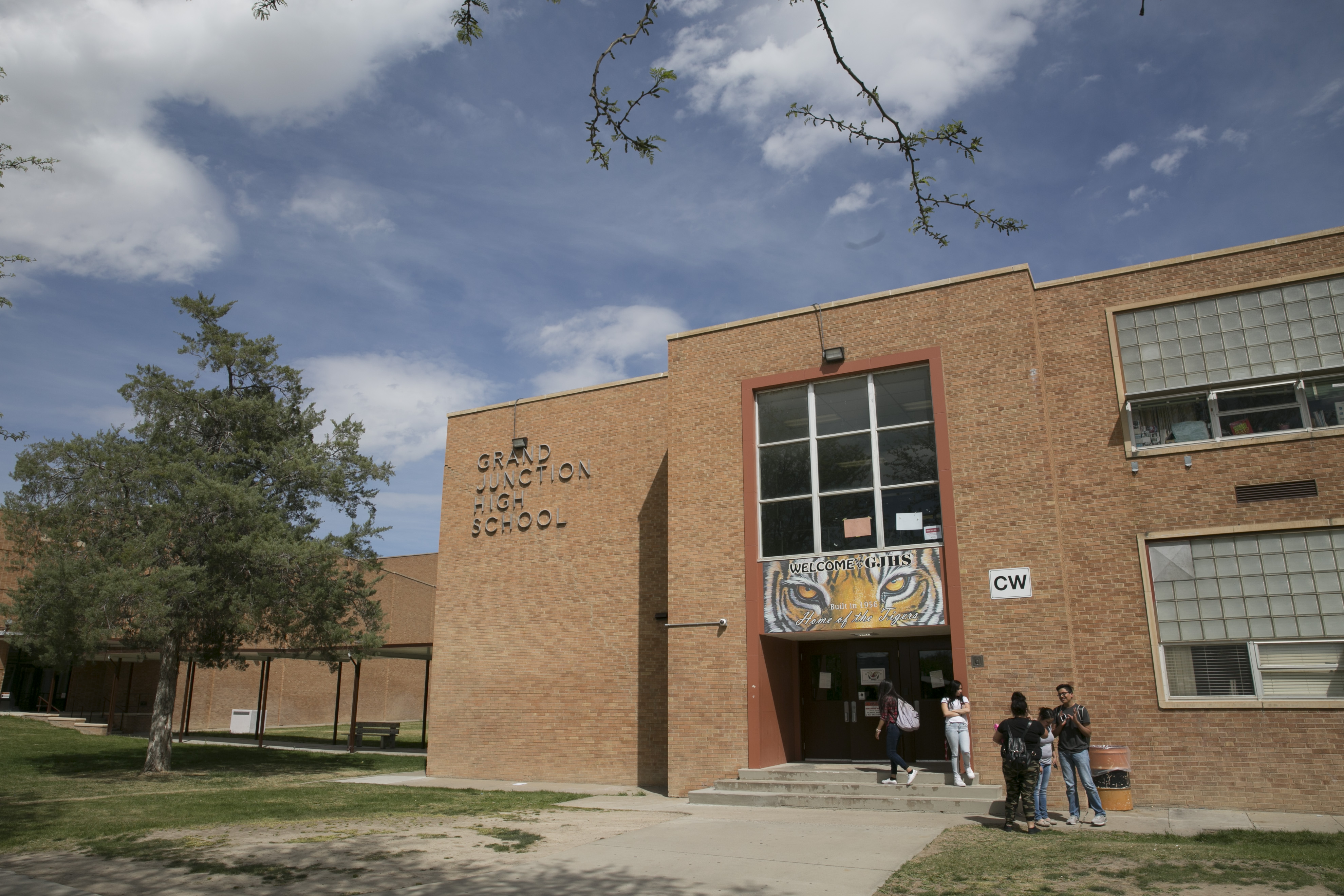 Of Donald Trump’s shifting positions concerning immigration and DACA, the military route for citizenship is one he’s expressed support for — though as a candidate, not the president. As a candidate, Trump also said he would end DACA,which he called an uconstitutional exectutive order.

As president, over the outrage of some supporters, Trump has quietly allowed the program to continue. Recently, he said, "we are not after the Dreamers, we are after the criminals." And yet, some have been arrested, at least one after making her story public. The administration said that young woman’s DACA status had lapsed, and released her after public outcry.

In Diego’s part of Colorado, Trump won by more than 35 points. Pacini, Diego’s social studies teacher, says he knows a lot of people in the school community who want the president to stick to the harder line on immigration he promised during the campaign.

“Half the community is very much frustrated with -- especially illegal -- immigration, because they feel like their parents are losing out on jobs to these immigrants,” Pacini says.

The Challenge Of The American Dream

Diego’s parents brought him to the U.S. from Mexico when he was 5-years-old, so they could find work. His father had already spent time in the peach orchards of Palisade, and still works in agriculture today. Diego’s mom has two jobs; in the kitchen at a fast food restaurant during the day, and with a cleaning company at night. They knew what could happen if they didn’t leave their birth country.

"Life is difficult over there," Diego says of Mexico. "There's a lot of violence. There's actually a lot of gangs. Extreme violence gangs." 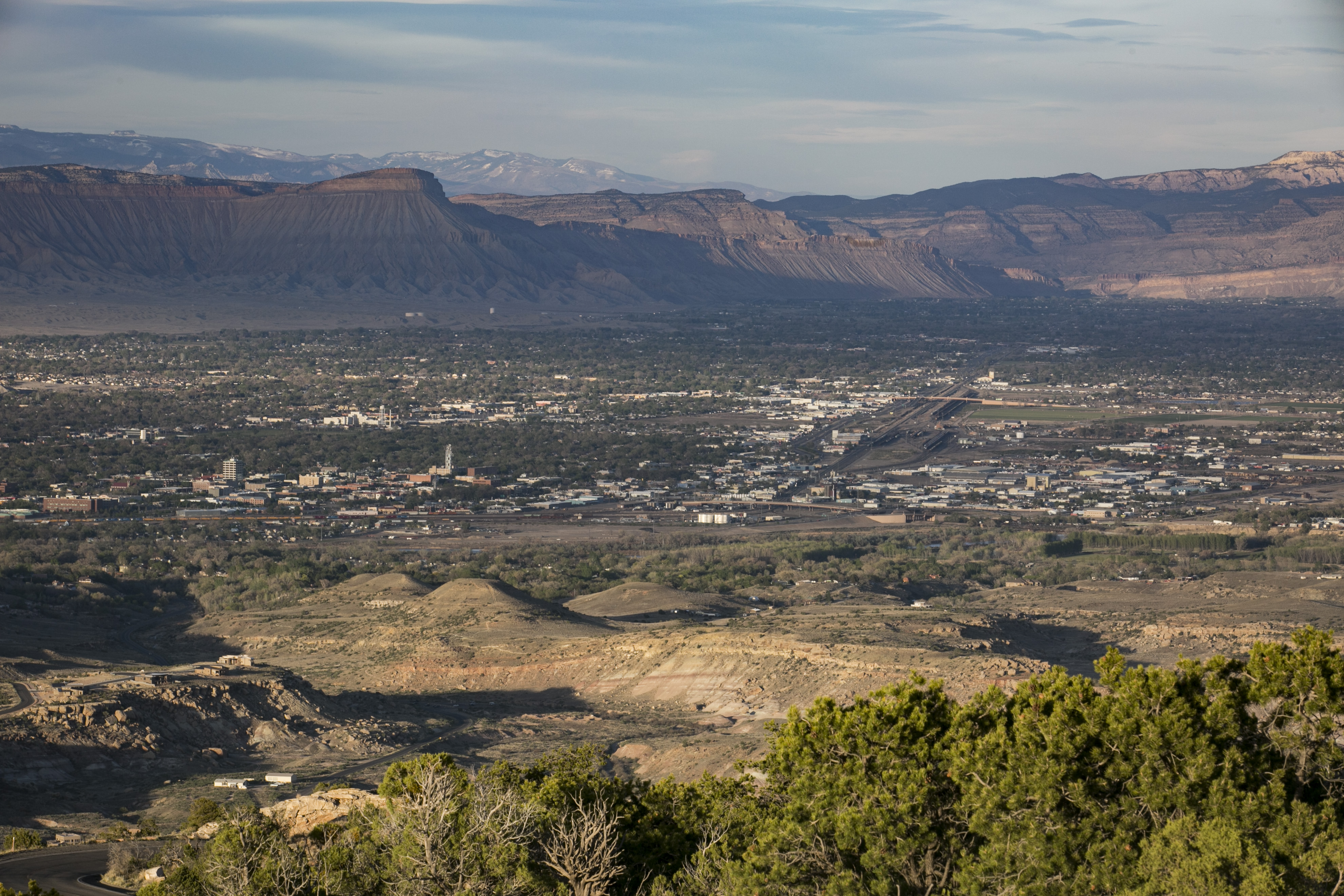 His uncle was killed in a gang dispute in Mexico, and they’re so pervasive, Diego says, that he’s pretty sure he'd “be in a gang right now if I was over there."

He hasn't been back to Mexico since leaving 11 years ago.

Most of Diego’s friends were born in the U.S., but he says they understand his situation. Gallows humor about immigration and the thought of deportation are common when they talk about it. During a recent break at school, Diego’s regular lunch crew munched on tacos and multi-colored tortilla chips at a local hangout. They laughed, saying that sometimes they’ll see a police officer and shout “Run!” as a joke.

But when it’s serious, they get serious about it.

Diego thinks most people may not understand what it's like for immigrants in America. Similar to his own school and work schedule, his parents work six days a week — including night shifts — so he only sees his family on Sundays.

“It’s difficult. [People] think it’s easy for us, like we just make money and that’s it. It’s like, no, that’s not how it works,” he says. “Like, we have to take care of our families that are still back in Mexico. And do all these things -- pay for lawyers to try to get citizenship. Try to stay safe. Try to not get in trouble.”

While his friends can stay out late, he says he has an early curfew. His mom worries that he has more of a chance of getting in normal teenage trouble late at night.

It’s just one small precaution the family takes to try to stay off the radar in an environment that looks very different for immigrants than it did a few months ago.