Denver-area students marched to the grounds of the state Capitol Wednesday, joining in a nationwide march protesting violence in schools and demanding new gun control measures from lawmakers.

"One child is worth more than all the guns on Earth," stated one sign held by a protester.

"I should feel lucky I get to go to school," read another, "Not lucky that I made it home alive."

And the full parade now streaming in from East High. Thousands of kids here at the Capitol. pic.twitter.com/Yg0w5618V7

Many of the student protesters marched from nearby East High School and other local schools. The event coincided with dozens of other walkouts across Colorado meant to mark one month since the deadly shooting inside Marjory Stoneman Douglas High School in Parkland, Florida.

Among those at the Capitol was Lar Amadeo, who started at the Denver School of the Arts this year after moving from outside Parkland. She learned from television that her friend, Alex Schachter, had died.

"Every day I go to school afraid that I am going to die," she said. "And I don't think that should happen anymore."

At Columbine High School in Littleton, the site of a 1999 mass shooting, hundreds of students held a silent vigil. Thirty balloons were released, one for each of the 17 victims of the Parkland shooting and 13 for each Columbine victim.

The protests even spread to the Auraria college campus in downtown Denver. About 40 students and faculty walked out of class demanding new gun control laws. "I’m just exhausted," said Tammy Garrett Williams, a Metro State political science student and the mother of a Columbine survivor. "And I don’t know what else to do."

Outside the metro area, in downtown Colorado Springs, police estimated close to a thousand students at Palmer High School and community members joined in the walkout.

"They’re leading and we’re listening," Rachel Jabailey of Colorado Springs said of the students. "It’s a different day and so I just wanted to bring myself physically to show support and be here to witness this." 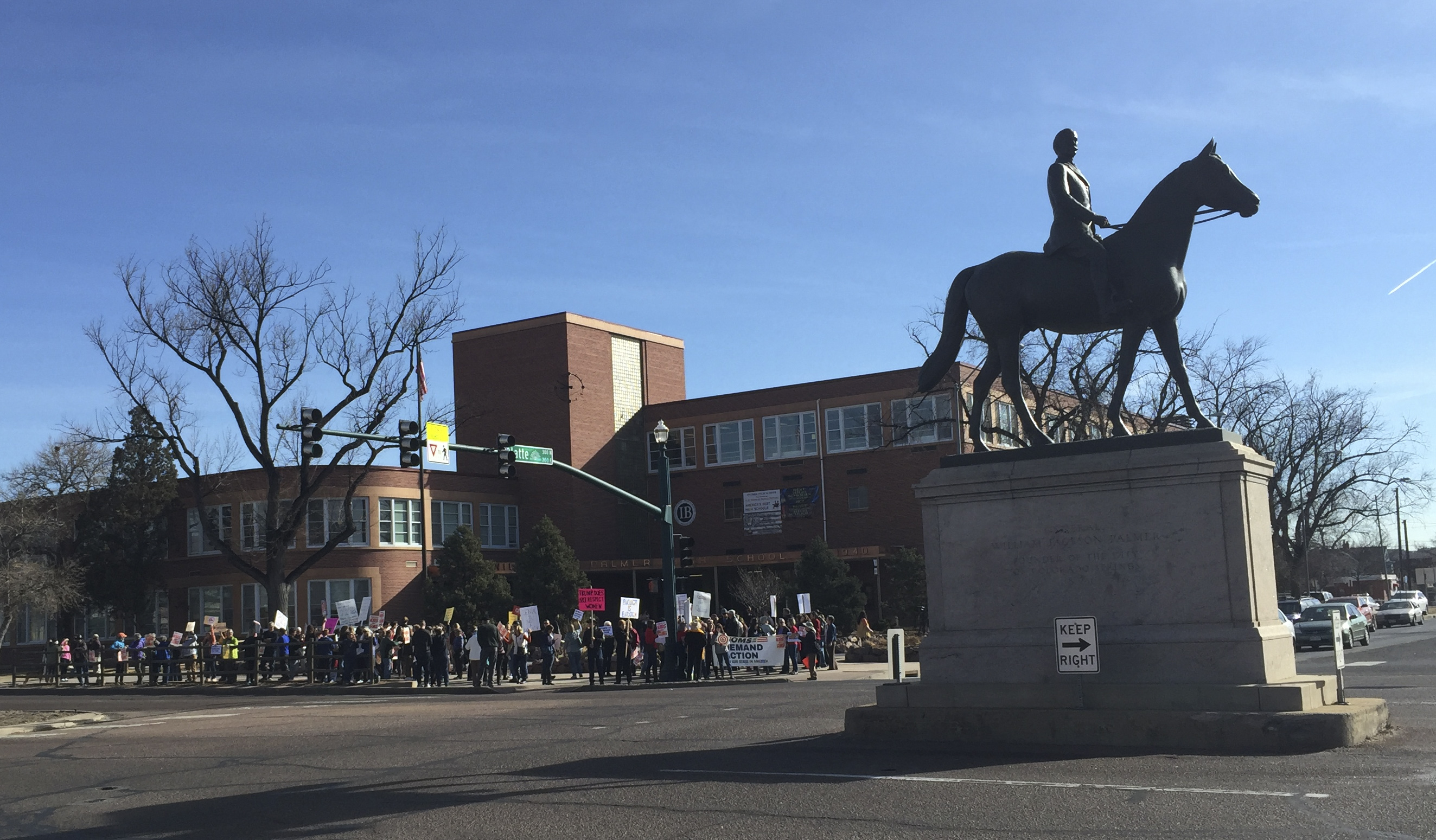 Further south, hundreds of students filed out of Pueblo's Central High School just before 10 a.m. Some carried signs and the mood was solemn. Each minute, for 17 minutes, student leaders read the names of each person killed in Parkland along with a bit of bio on each one — then the rest of the minute was silent until the next name was read. At the end of the readings white doves were released in memorial. Several dozen adults lined up on the sidewalk behind the students, many from Pueblo Indivisible, and a few carrying signs that said "we've got your backs."

Wednesday's nationwide action is one of several protests planned for coming weeks. The March for Our Lives rally for school safety is expected to draw hundreds of thousands to the nation's capital on March 24, its organizers said. A similar event is organized in Denver and will rally on the same day in Civic Center Park. And another round of school walkouts is planned for April 20, the 19th anniversary of the Columbine High School shooting.