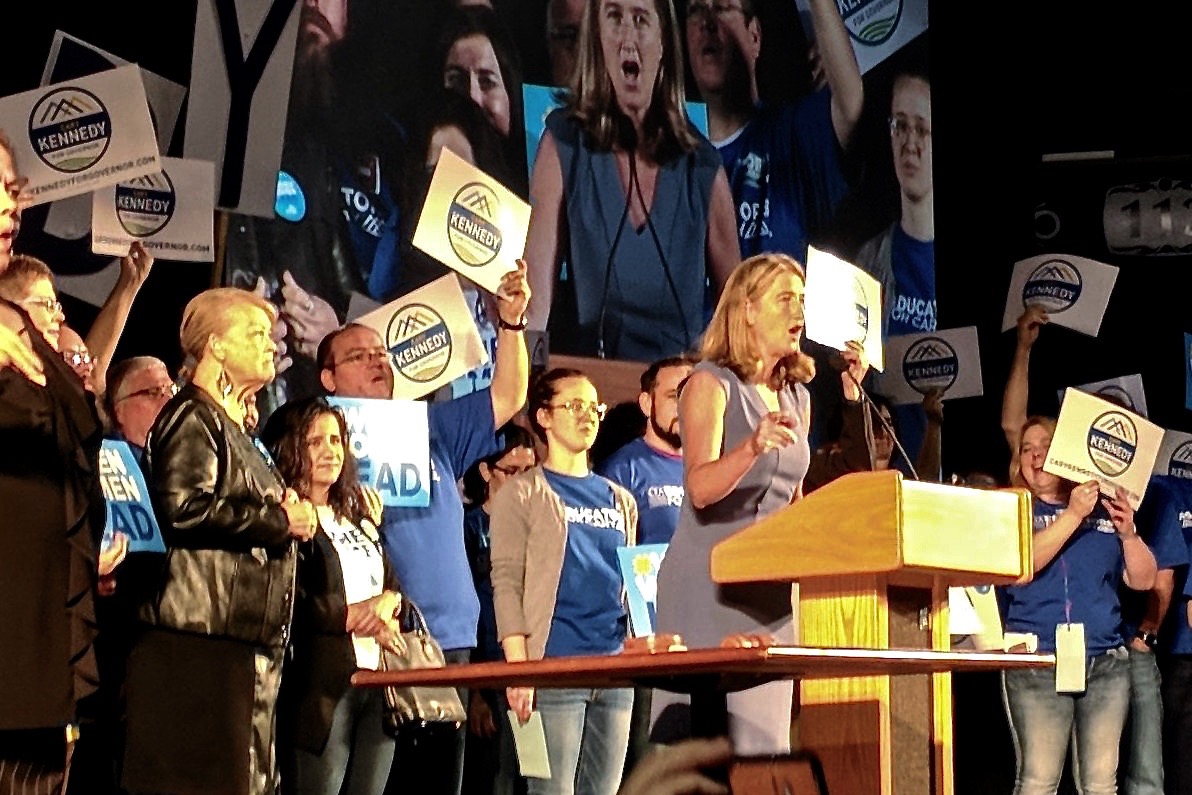 They move on to compete in primary elections this summer.

Unlike Polis, Kennedy has not petitioned to join the primary ballot. That meant her whole bid rested on getting at least  30 percent of delegates to guarantee her spot. She well exceeded the threshold at the assembly, winning 62 percent of delegates. Polis followed with 33 percent.

She declared that “2018 will be the year that women lead!” as she closed her speech. After the votes were counted, Kennedy said the results showed her campaign was focused on issues Coloradans care about.

“People want someone who will make education our top priority. They are concerned about the impacts of growth in our state, on our environment and keeping Colorado an affordable place to live,” she said.

For Polis, a five-term congressman from Boulder, the total at the assembly is not as important. He has a slight lead in polls over Kennedy and wide advantage in campaign spending. He also submitted petitions in March to join the primary. His showing at the state assembly guarantees him a ballot spot whether or not the Secretary of State approves the signatures. He said his appearance at the assembly was an opportunity to make his case to the Democratic faithful.

“For me, it’s an opportunity to get my message out,” Polis said. “The people who come here today are active in their community, their neighbors rely on them, so we want to give them the information they need.”

In the race for attorney general, Phil Weiser, a former University of Colorado law dean, won 52 percent support from Democratic delegates. He was followed by state Rep. Joe Salazar, who gave fiery a speech and won 36 percent. Both qualified for the primary. Amy Padden missed the ballot with 10 percent of delegates.

Salazar had counted on the assembly not just for a primary spot, but also to show he has the grassroots support to take on Phil Weiser. The former law dean has raised more money than Salazar by a ratio of 17-1 so far, according to the latest campaign finance reports.

The race for attorney general can be seen as a contest between the progressive and moderate wings of the Democratic Party. While Salazar was one of the loudest Colorado voices for Bernie Sanders in 2016, Weiser is a former official in the Obama administration.

But for many delegates, the assembly was a chance to heal wounds opened in 2016. Candidates at the podium called for unity around shared goals like universal health care and addressing climate change.

There were some moments of tension, though. In a voice vote, the delegates called on Democrats For Education Reform to remove the word “Democrats” from its name. The well-financed group supports charter schools and isn’t afraid to throw its weight around in elections or at the state Capitol. Opponents of DFER said the organization hurts traditional schools and weakens protection for teachers.

But Azarek Madrigal, a delegate from Alamosa, said the party can’t let those kinds of divisions stop it from confronting Republicans in November.

“If 2016 taught us anything, it’s that there needs to be a certain level of respect and cooperation,” she said. “That’s where this energy is coming from.”

What was expected to be a contentious head-to-head race for governor between State Treasurer Walker Stapleton and Attorney General Cynthia Coffman ended in a win for Stapleton, a trip home empty-handed for Coffman, and the surprise emergence of former Parker Mayor George Lopez.

Stapleton won 44 percent of the vote, more than he needed to make it onto the primary ballot. Lopez garnered 33 percent while Coffman took 5 percent. That put her behind Steve Barlock and Barry Farah but ahead of Lew Gaiter and his 1 percent, and Teri Kear who earned votes from just six delegates.

Correction: We reported that Teri Kear earned no votes from Republicans in seeking to get on the primary ballot for governor. She earned six. The story has been updated.