The name almost seems cruel now. Paradise Acres. It’s a subdivision full of second homes and retirees just off La Veta Pass in southern Colorado, and it was one of the areas hardest hit by last summer’s massive Spring Creek Fire.

“Welcome to paradise,” resident Michael Dent said, standing outside his scorched, but still-standing home. “What’s left of it anyway.”

Dent, a retired Methodist pastor from Denver, and his wife Sharon, moved to Paradise Acres last spring. They envisioned a quiet new life, surrounded by friendly neighbors and old-growth pine in the shadow of 11,416-foot Iron Mountain.

"We were aware of the fragileness of the environment,” Michael Dent said. “But never thinking [fire] would strike here."

That all changed one night in early July. The Spring Creek Fire was burning to their south, in Costilla County. But the winds picked up, and Sharon decided it was time to go.

They camped out in a hotel on Pueblo’s outskirts, then stayed with friends in Denver. Days went by before they finally heard the news: Their home was one of about 15 out of 37 in Paradise Acres that survived.

“Ours is one that was really lucky,” Michael Dent said. “The inside of our house is just fine.”

The Dents had done some fire mitigation, cutting down a few trees near the house just a week before the fire. That probably helped save it, they think. The exterior is burned in some areas, but overall in surprisingly good shape considering how close the flames were. It feels like an protected island surrounded by acres of blackened trees and charred foundations.

"It's kind of like a graveyard," Michael Dent said.

The Spring Creek Fire is the state’s third-largest on record, burning some 108,000 across Costilla and Huerfano counties. Authorities have charged Jesper Joergensen, 52, of Denmark, with starting the blaze just east of Fort Garland. He told police he had been grilling in a fire pit the day before the fire started.

Hot and dry weather with windy conditions helped make this the worst fire season in Colorado since 2002. More than 450,000 acres — or about 700 square miles — have burned across the state. Two hundred and sixteen homes have been destroyed, and another 119 were damaged, according to Larry Helmerick, spokesman for the Rocky Mountain Coordination Center in Lakewood.

And fire season isn’t over yet.

“We’ve had large fires in October, November and December in the past,” he said. “We’d like to think we’re done with fire, but that’s not the case at all this year.”

The Spring Creek Fire was fully contained only earlier this week. Huerfano County Commissioner Max Vezzani said one of his top concerns now is flooding. The ground doesn’t have much vegetation anymore to soak up moisture.

"We're working on that literally daily trying to figure out, 'what to we do to protect lives and property? And how to we get those warnings out?' " Vezzani said.

Local governments, the state, and the Federal Emergency Management Agency are working together to figure out where flooding might be worst, Vezzani said, and where homes and other buildings shouldn’t be rebuilt. 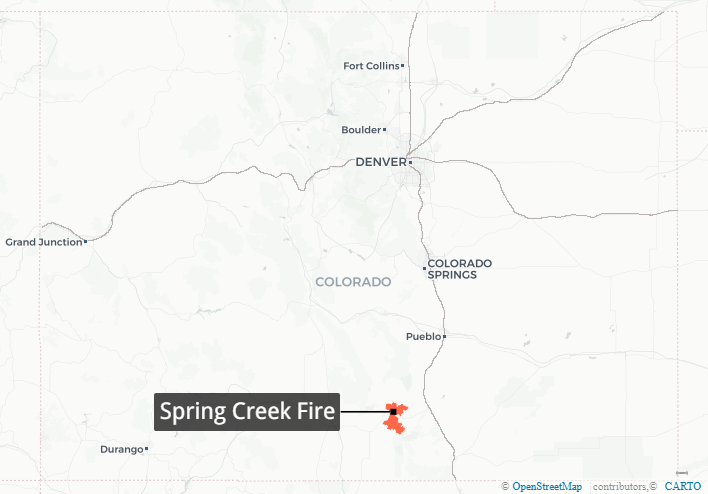 The fire has changed the geology of steep slopes where homes once stood, he said. Some have been damaged by rockslides.

"We may try to discourage building permits for a several year period — for sure for next summer,” Vezzani said.

All of that uncertainty means many of the Dents’ neighbors are in a wait-and-see period. Some of the subdivision’s roads were washed out, and its private well was contaminated, further complicating cleanup.

"If we don't get a fairly large influx of funds, from FEMA or some other agency,” said Mike Bronoski, president of the Paradise Acres homeowners’ association, “the odds of us rebuilding this water system are slim to none."

The Dents intend to stick it out. But they know everything has changed.

"We've developed some very deep friendships in the neighborhood,” Sharon Dent said. “It breaks our hearts for them, those that lost so much.”

Michael Dent said he’s gone through many of the phases of grief — he’s stuck in depression now. So he’s turned to the Bible, a book he’s used thousands of times before to counsel others. Two passages have stood out.

"I'll never leave you, nor forsake you.”

"The creator says, 'And when you walk through the fire you shall not be burned."

As he recited these lines from the bible, Sharon listened intently. She then rested her head against her home, and quietly wept.