Colorado’s landscape is carved up, in part, by meandering canals.

Over the years, the man-made waterways have shifted from pure tools of agriculture to spaces for outdoor recreation.

Denverite Beyhan Maybach asked Colorado Wonders about the history of the canals, and who owns them.

Maybach enjoys wandering the trail on the irrigation canal across the street from her 8-year-old daughter, Leyla’s, school in suburban Lakewood. Houses line each side of the canal and ducks float in the water. Leyla catches roly-poly pill bugs and collects wildflowers while her mom enjoys the serene environment.

“It's beautiful. It's very relaxing. It's very meditative, in a way,” Maybach said.

Her interest in the waterways goes further than relaxing afternoons with her daughter — Maybach is an ecologist who studies how humans interact with the environment.

The origins of Colorado’s canals dates back to the mid-1800s, said Matt Bond, the head of youth education at Denver Water. They were especially important on the Front Range, where a lack of precipitation meant finding other ways to keep garden plots and fields watered.

“They started from the very earliest days, whether they were big formal canals in any way, or just someone trying to move water 25 yards farther away from the edge of the river to wherever their garden plot was,” Bond said.

But despite the fact a canal may run by your property, that doesn’t give you the right to use the water flowing through. Colorado’s water rights system, and most of those throughout the West, only grant rights to contract holders, not by proximity.

Two centuries on, some Colorado canals are remaking themselves. 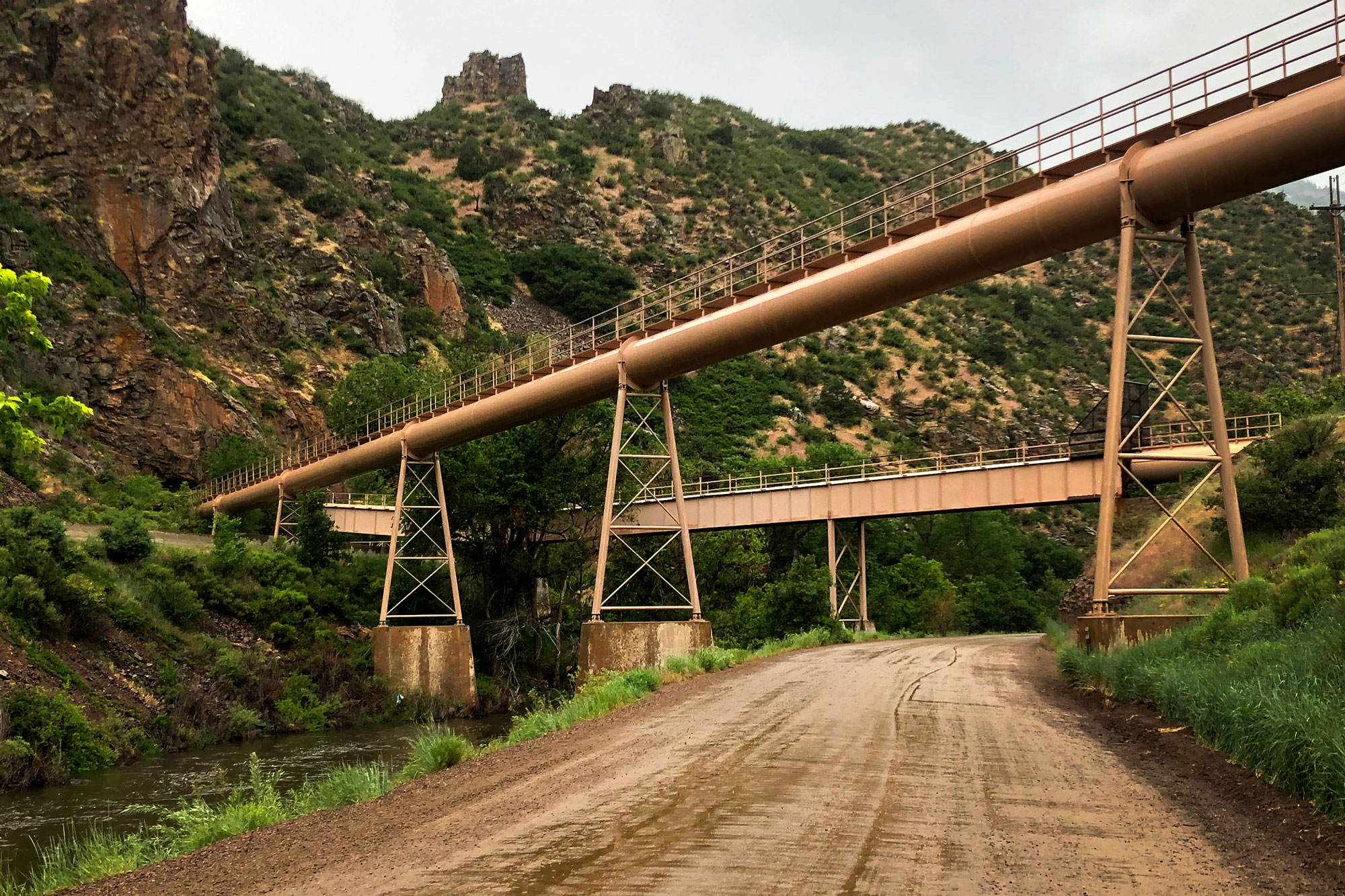 Andrea Dukakis/CPR NewsThe aqueduct in Waterton Canyon on the South Platte River that carries water to the start of the High Line Canal, June 18, 2019. 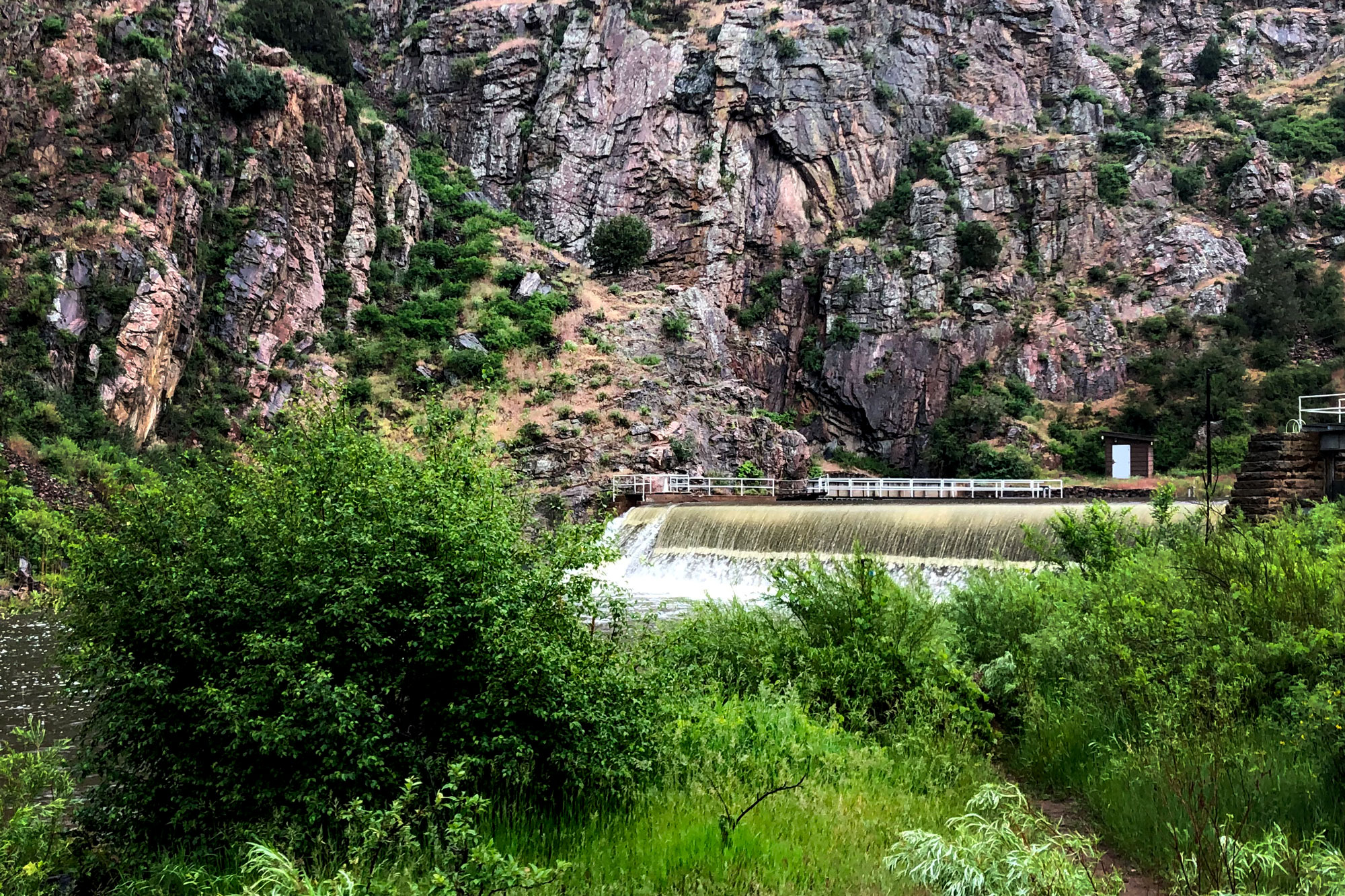 Andrea Dukakis/CPR NewsThe dam and diversion in Waterton Canyon on the South Platte River that marks the start of the High Line Canal, June 18, 2019. 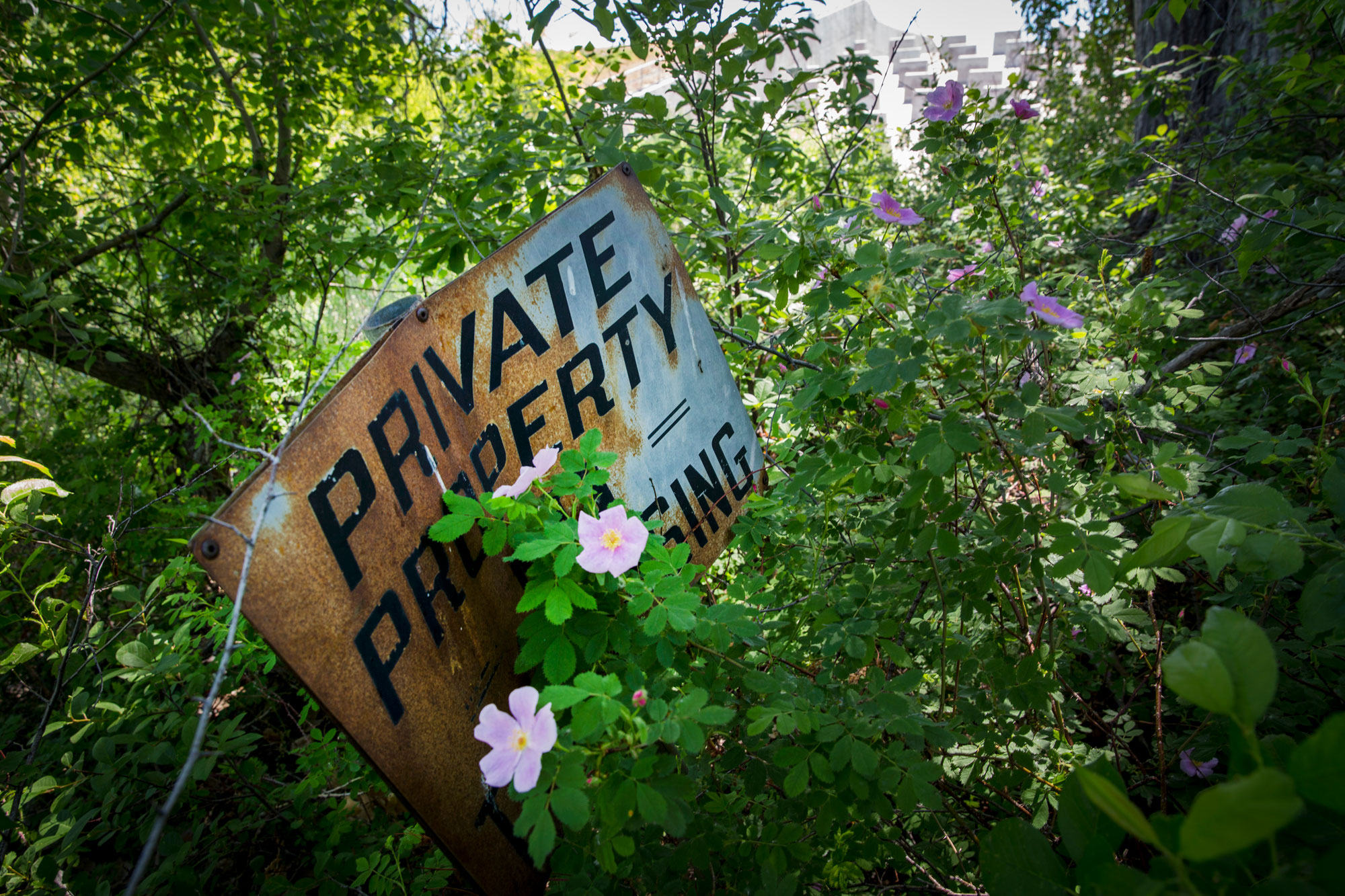 Hart Van Denburg/CPR NewsThe High Line Canal, once an important irrigation system for Colorado's Front Range, is better known now as a recreation trail. This private property sign stands in the woods near where the canal emerges from Waterton Canyon. June 12, 2019. 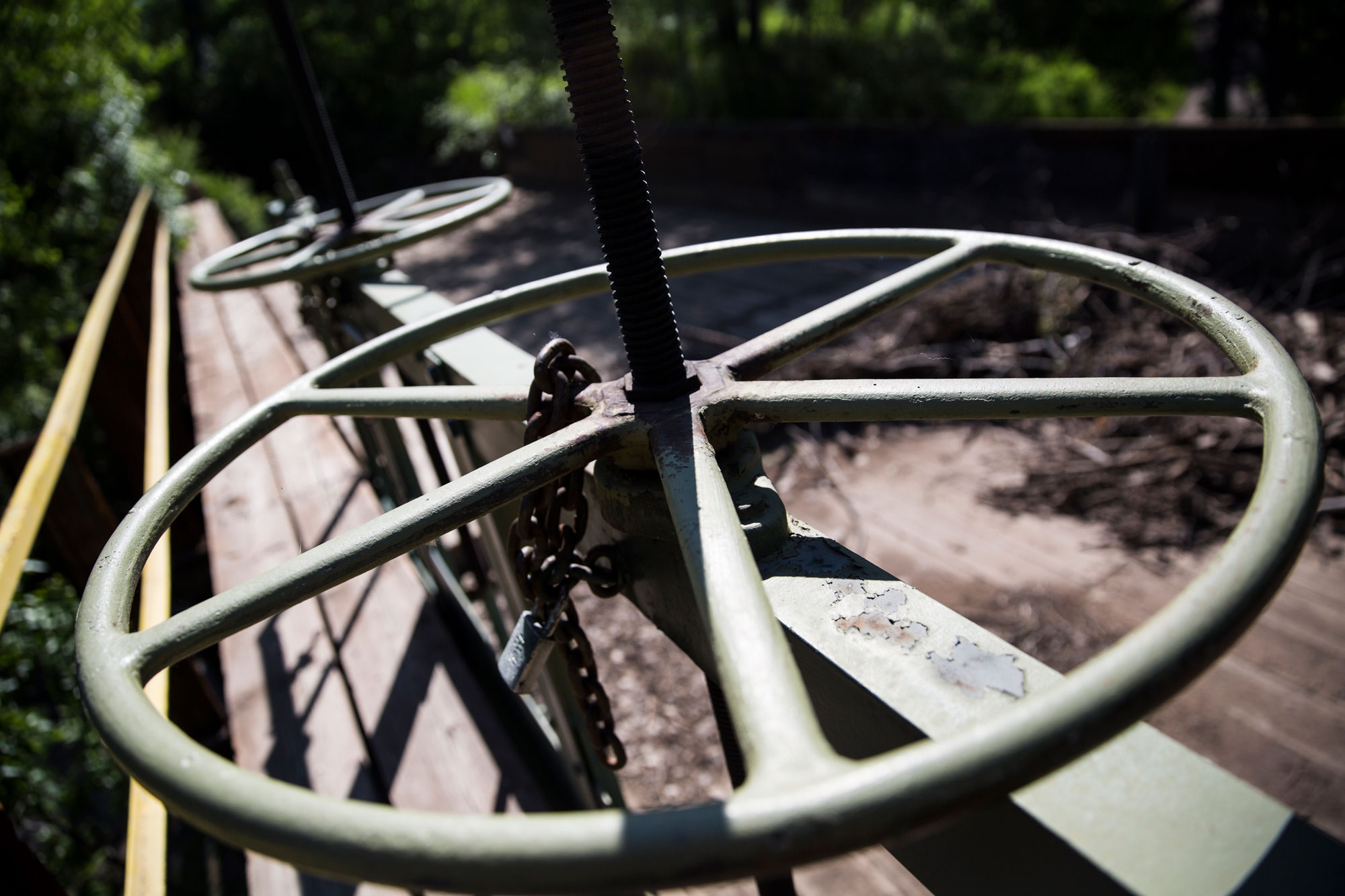 Hart Van Denburg/CPR NewsThe High Line Canal, once an important irrigation system for Colorado's Front Range, is better known now as a recreation trail. This is the dry aqueduct that was built to carry the canal over Lee Gulch in Horseshoe Parl west of South Broadway. June 12, 2019. 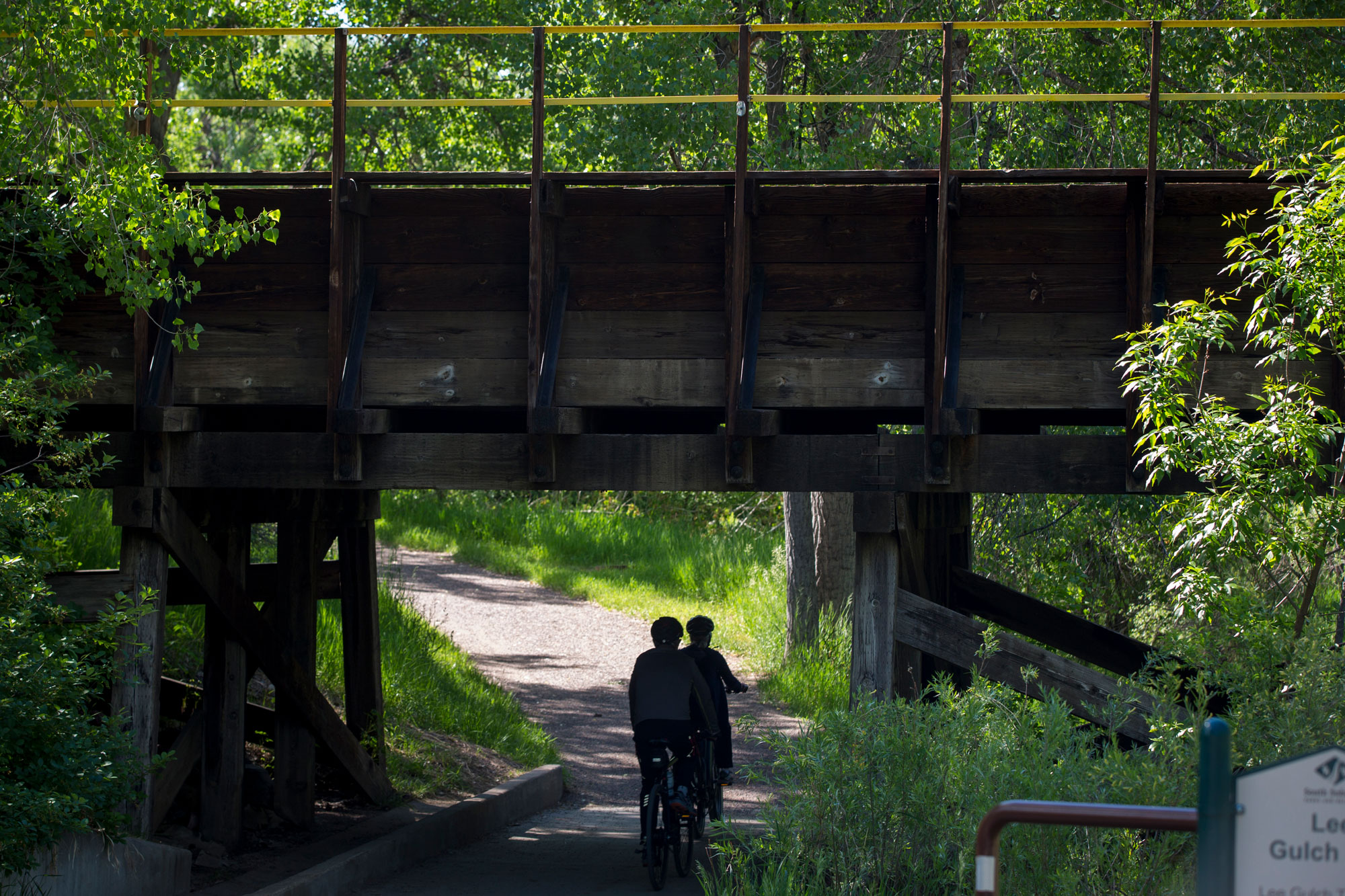 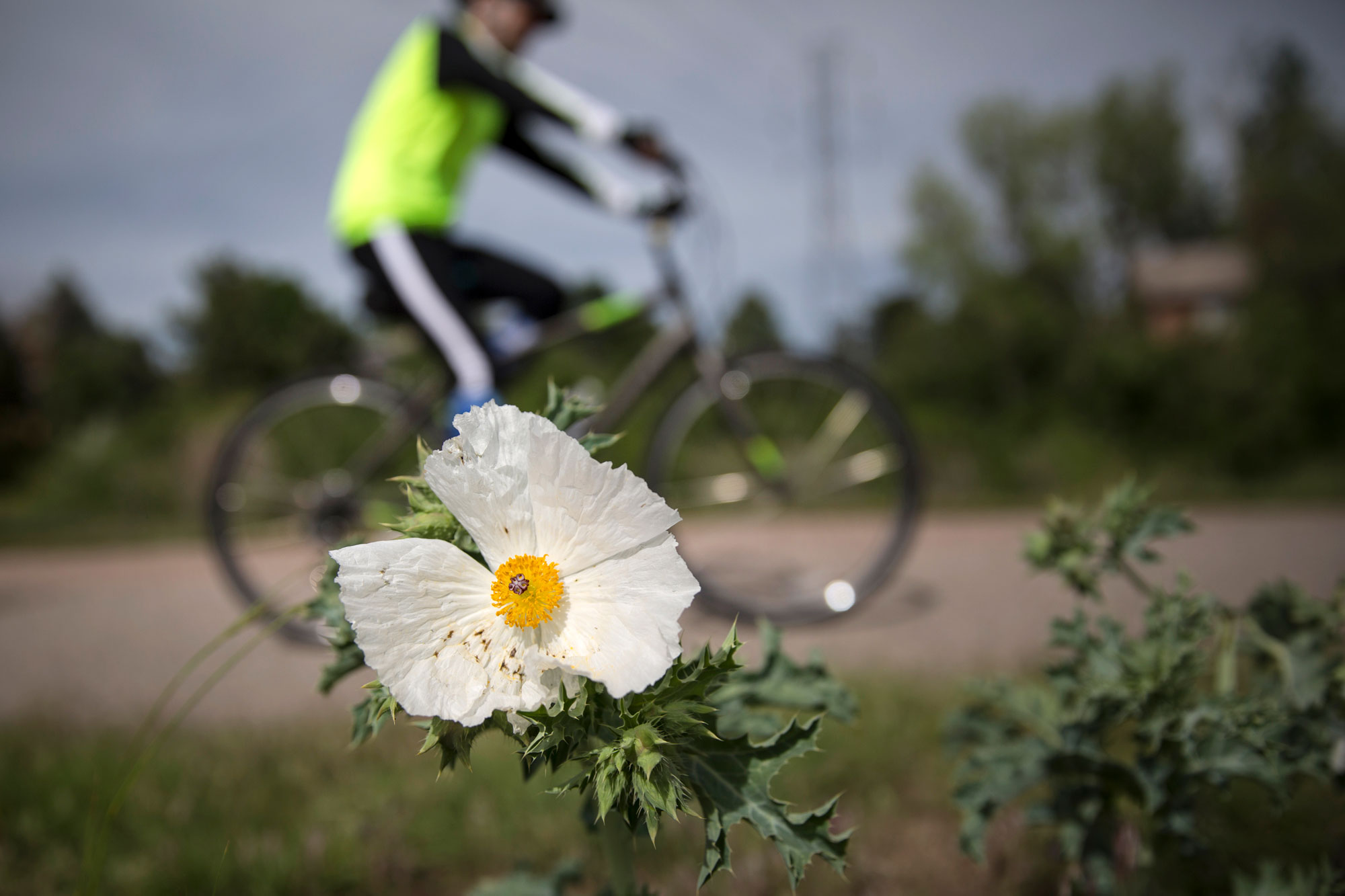 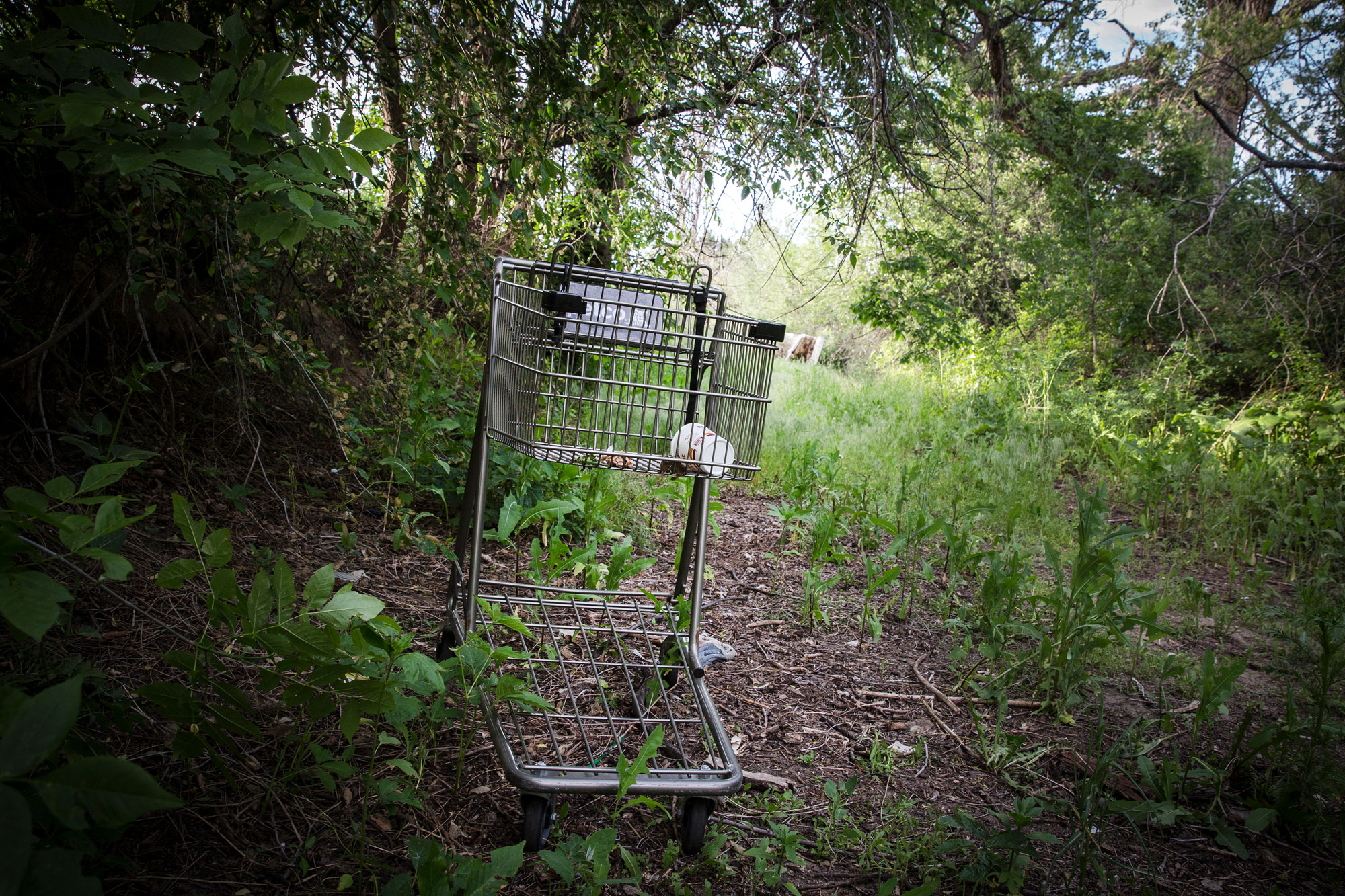 Hart Van Denburg/CPR NewsThe High Line Canal, once an important irrigation system for Colorado's Front Range, is better known now as a recreation trail. A shopping cart was abandoned in the dry canal bed near Expo Park in Aurora. 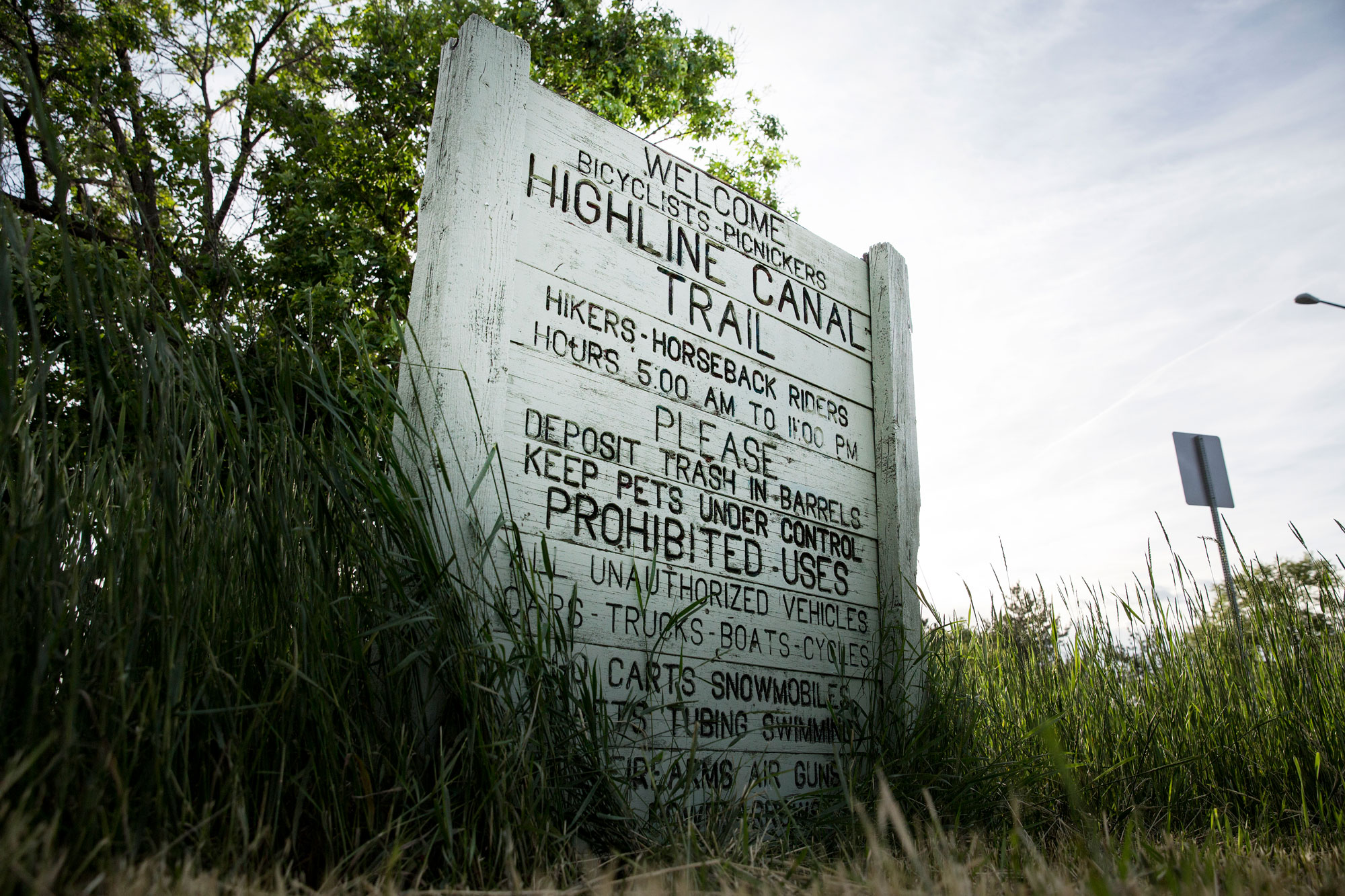 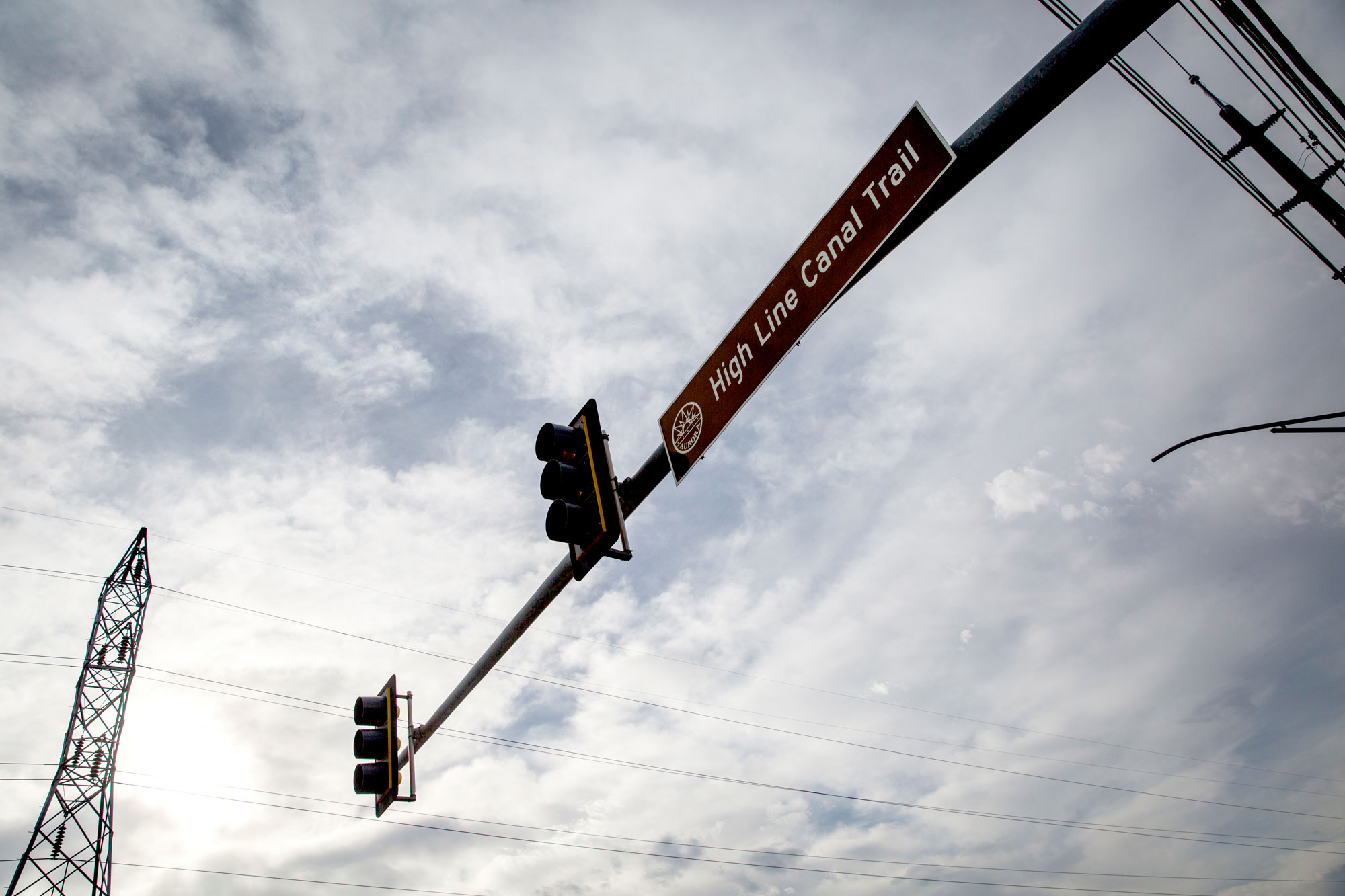 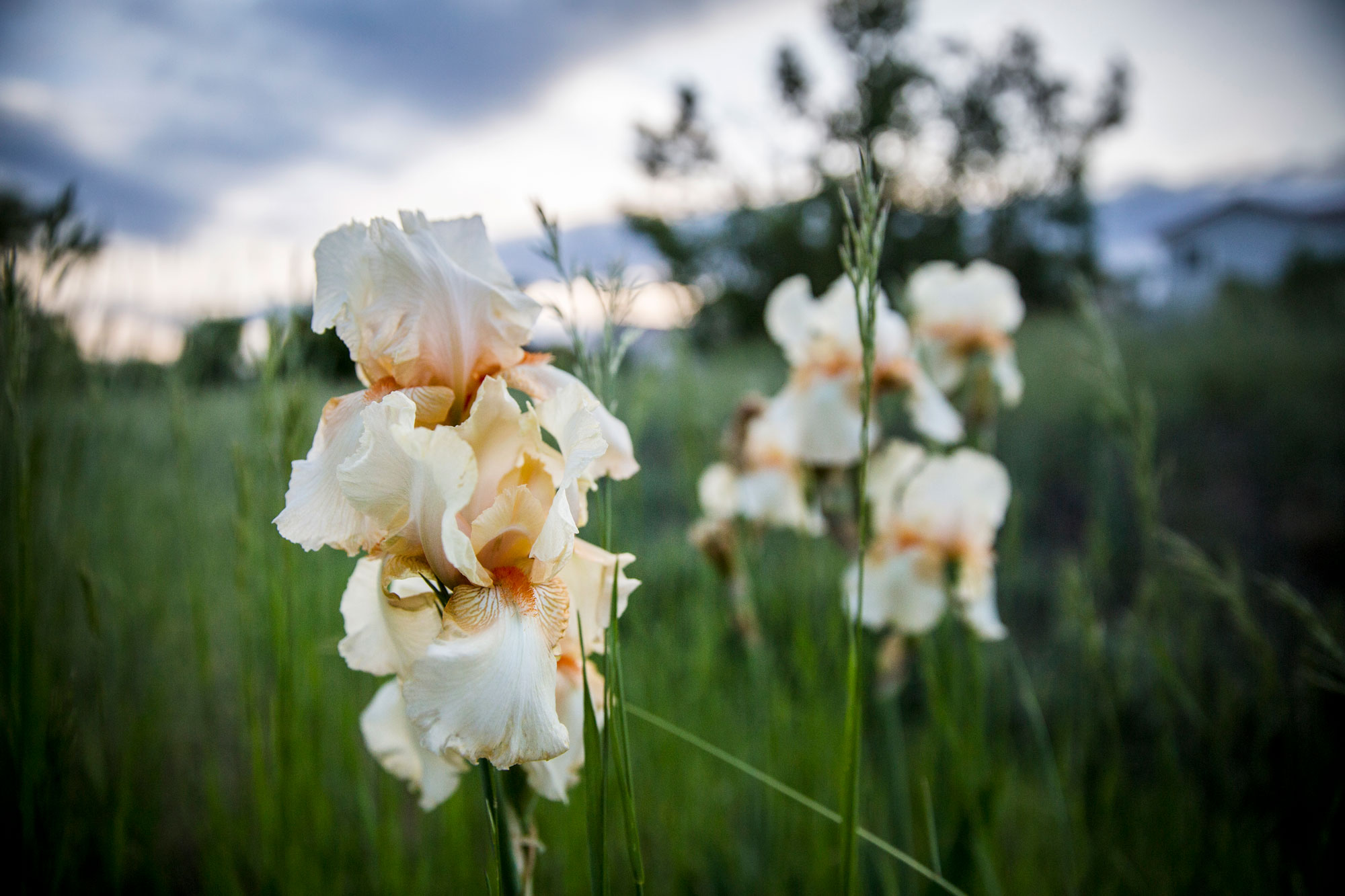 Hart Van Denburg/CPR NewsThe High Line Canal, once an important irrigation system for Colorado's Front Range, is better known now as a recreation trail. Flowing from Waterton Canyon it makes its way northeast and ends near Denver International Airport. This photo of flowers blooming in the canal bed was made in Green Valley Ranch June 12, 2019.

One is the High Line Canal, which starts in Douglas County at Waterton Canyon and winds northeast all the way to Aurora near Denver International Airport. The 71-mile corridor was built, like others, to carry water to farmers along the route. Water from the South Platte River is funneled into a tunnel and carried in aqueducts before it arrives on the high plains, hydrating an entire region.

Today, the walkers and bicyclists follow the path as it winds through rural and urban areas. One of the High Line Canal’s great champions is Harriet LaMair, who heads up the High Line Canal Conservancy. She finds wonder in the area’s longevity.

“We're right in the heart of the city of Denver and in the region, and yet this historic trail that was built to bring irrigation water to farmers way back in the 1800s is still here,” LaMair said.

The truth is, the canal has never been ideal for carrying water. There’s a lot of seepage and evaporation along the way.

Today the High Line Canal is owned by Denver Water, which manages the canal for contract holders, like the Fairmont Cemetery in Denver. The water is released for just a few weeks a year, depending on how wet the season is, and it no longer flows to the end. But the canal has assumed a new role and way to serve Denverites as a natural greenway.

“It's being used in a recreational trail and a place of nature for all these people and it's really unique to think,” she said. “It's all interconnected.”

LaMair wants to continue to improve the trails so the path reconnects in the urban sections where it stops and starts. The plan is to put up signs along the way that direct people and recount the canal's history.

There's a lot left to do, but local governments along the entire route are working with Denver Water, the High Line Canal Conservancy and even private developers to fix the canal up piece by piece.

For now, LaMair envisions a renaissance when a time when the entire path is transformed: maybe biking from the airport to Waterton Canyon, stopping at a bed and breakfast along the way.