At nine years old, Jahleesa Lawler is one of the youngest captains for Platinum Divaz, a dance team based in Aurora. She’s been on the team for three years and she takes her role very seriously.

“My way of coaching is like sometimes I’m nice, sometimes I get frustrated because they can’t learn the dances so we have to move on to other dances that they already know,” she said.

Members of the youth team range from kindergarteners to high schoolers.

On a late Thursday afternoon in a noisy dance studio, she was learning a new dance which features a lot of hip hop and majorette styles. It was taking her a little longer than usual to get it right, with a tight deadline looming. She had just two days to perfect it before one of their first performances since the pandemic shutdowns.

“It’s just so fast and I have to remember the moves in my head,” she said.

The Platinum Divaz, originally known as the Platinum Diva Princess Team, has been around for seven years, with the mission of encouraging leadership skills and self-esteem, particularly for Black girls, although all ethnicities are welcome. While boys are welcome and male team members are called “The Platinum Gents,” it’s a space originally designed for girls to work hard, and support each other, through dance.

For most of the summer, the 50 dancers on the youth team had to practice over Zoom and have only been able to meet in person for the past two weeks. These days, the team has its own space for the first time in seven years. All the dancers get their temperature checked and have to use hand sanitizer before entering the studio.

The pandemic didn’t slow Lawler down. When she’s not at practice, she’s in her bedroom going over her steps while her mother watches to make sure she’s hitting every move. Lawler acknowledged that it’s a lot of work, but if she doesn’t have the dances down, she can’t teach it. She said she would do anything for her teammates that feel like family.

“I just like that I’m here with my sisterhood and we support each other,” she said.

Chiniqua Jackson, one of the team’s founders, said inclusion is the most important part. It’s why she doesn’t do tryouts.

“We help people who feel they don’t have any talent work on finding their talent and finding a place that houses them,” she said. “Two left feet, no rhythm, or all the talent in the world ... we’re going to take you, we’re going to work with you.”

For young women who may be made to feel lesser than elsewhere, this is a place to get built up. The team spends a lot of time talking about embracing their melanin and going into the world as independent young ladies.

“We’ve always wanted to be where they can come and feel like it was family,” she said. “We always want to make it feel like a second home, a fun place away from home.”

Divaz are assigned mentors from among their teammates. The mentors, typically teenagers along with a few younger leaders like Lawler, are expected to not only teach dances, but also help the younger girls navigate everyday obstacles like school, bullying and self-confidence. 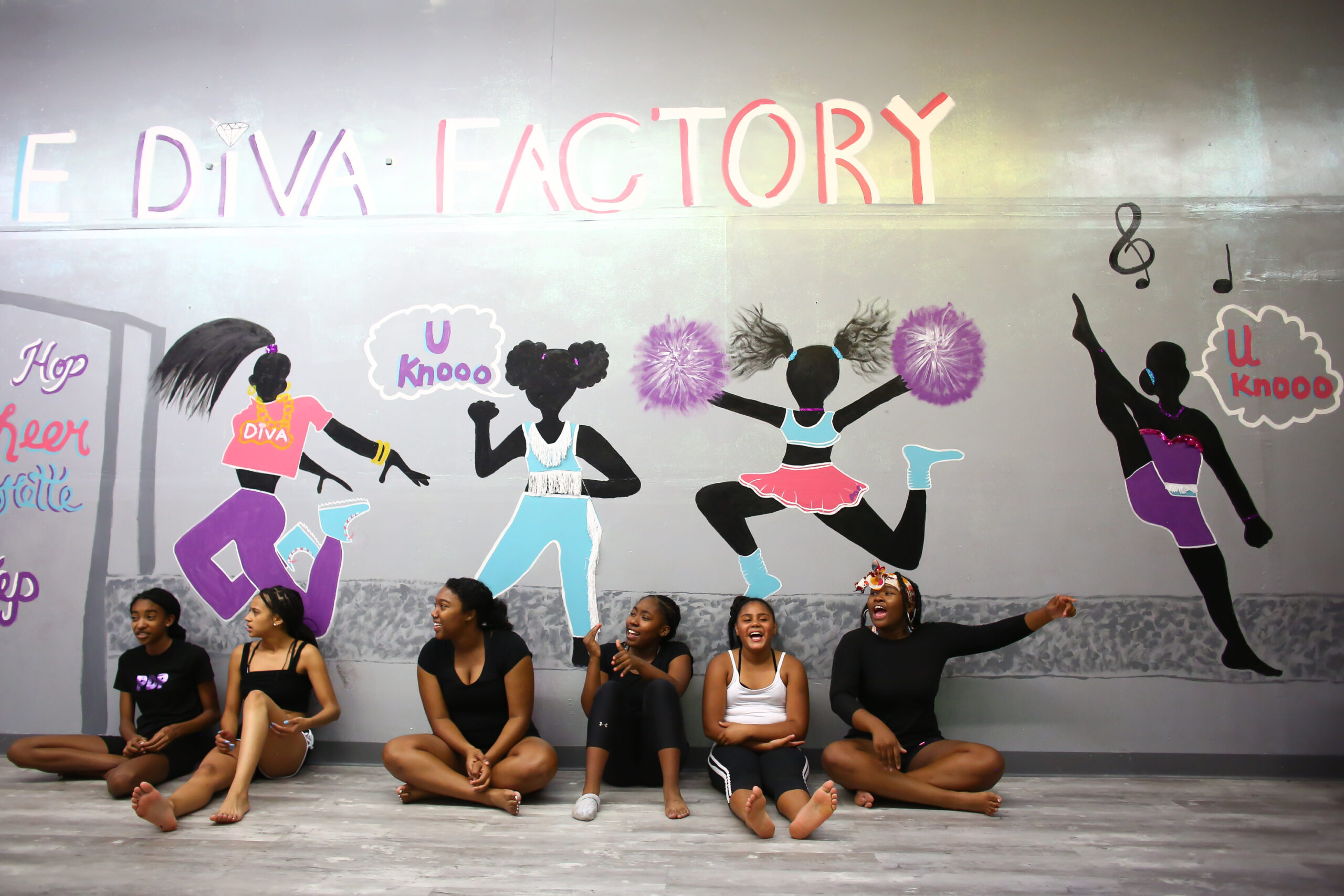 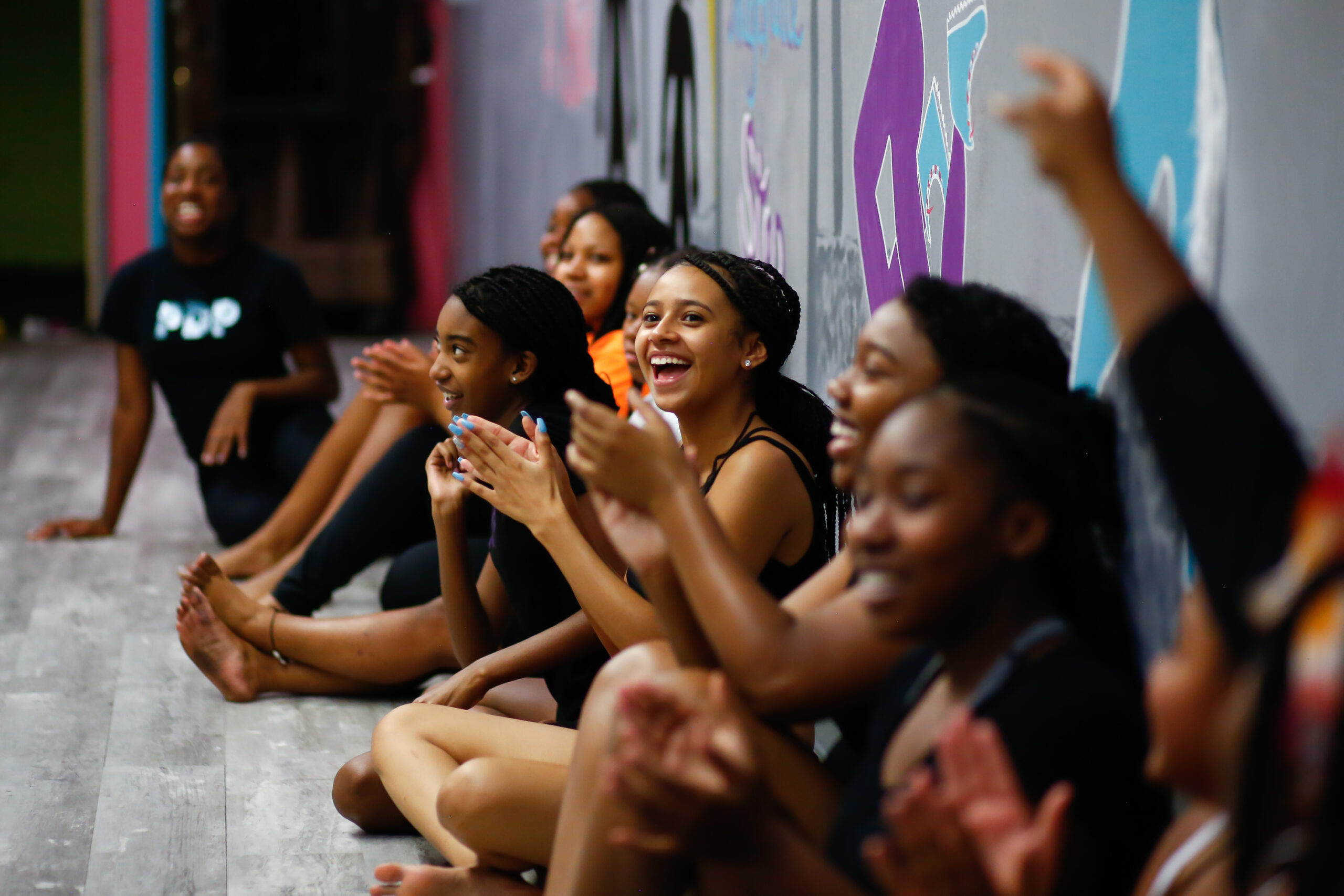 Kevin Mohatt/For CPR NewsMembers of the Platinum Divaz dance group have fun watching each other practice moves at their studio in Aurora, August 20, 2020. 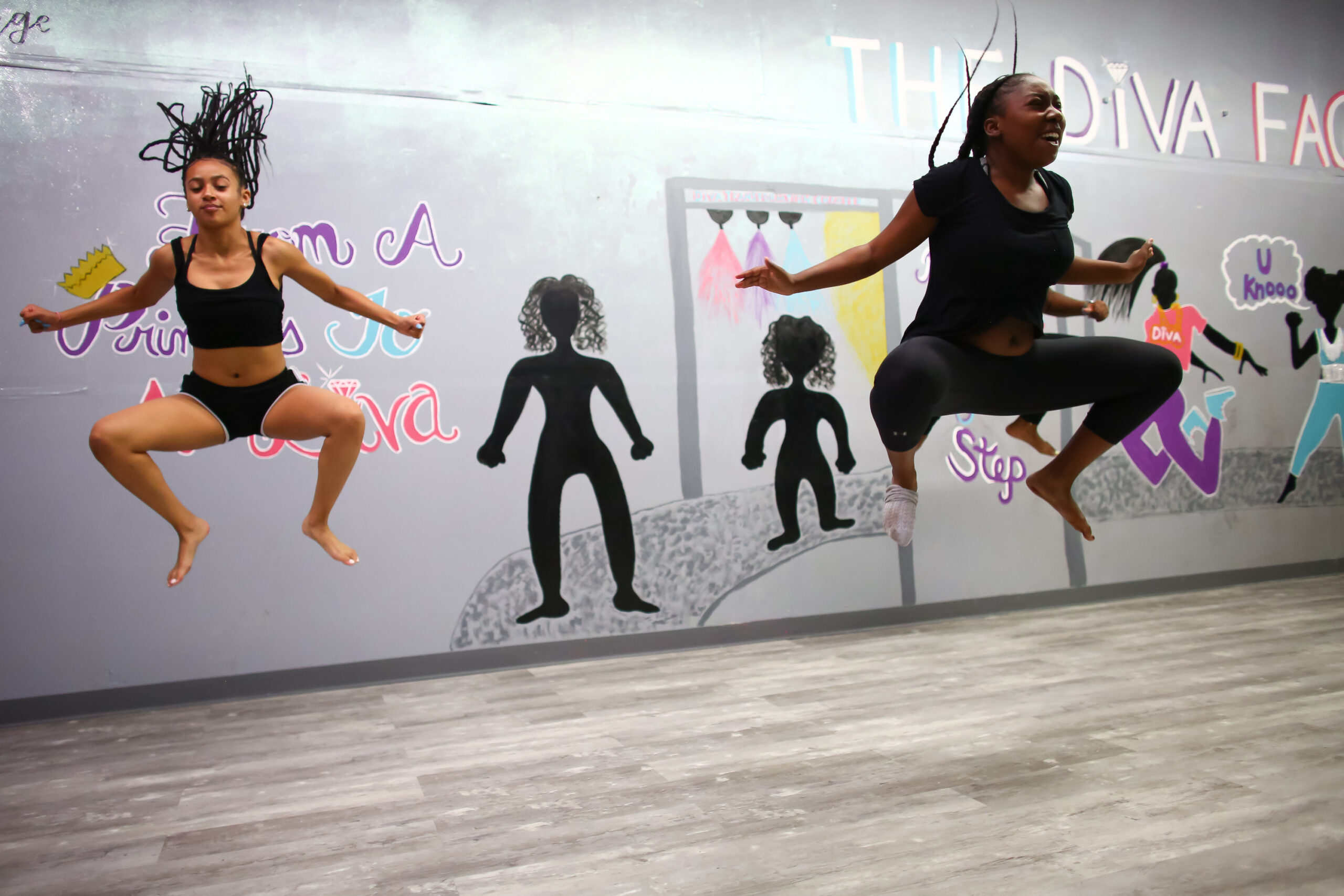 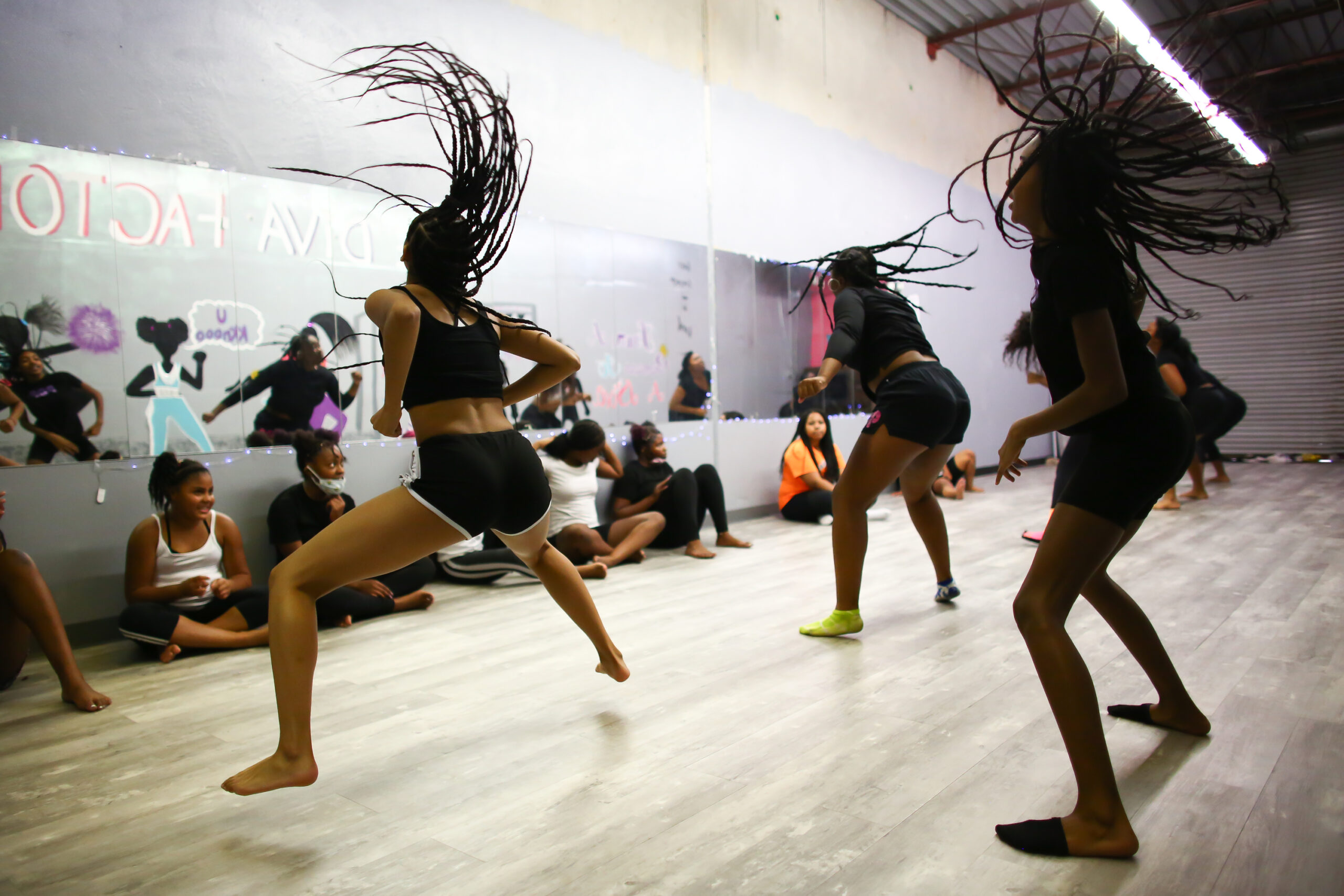 Kevin Mohatt/For CPR NewsMembers of the Platinum Divaz dance group practice their routine at their studio in Aurora, August 20, 2020. 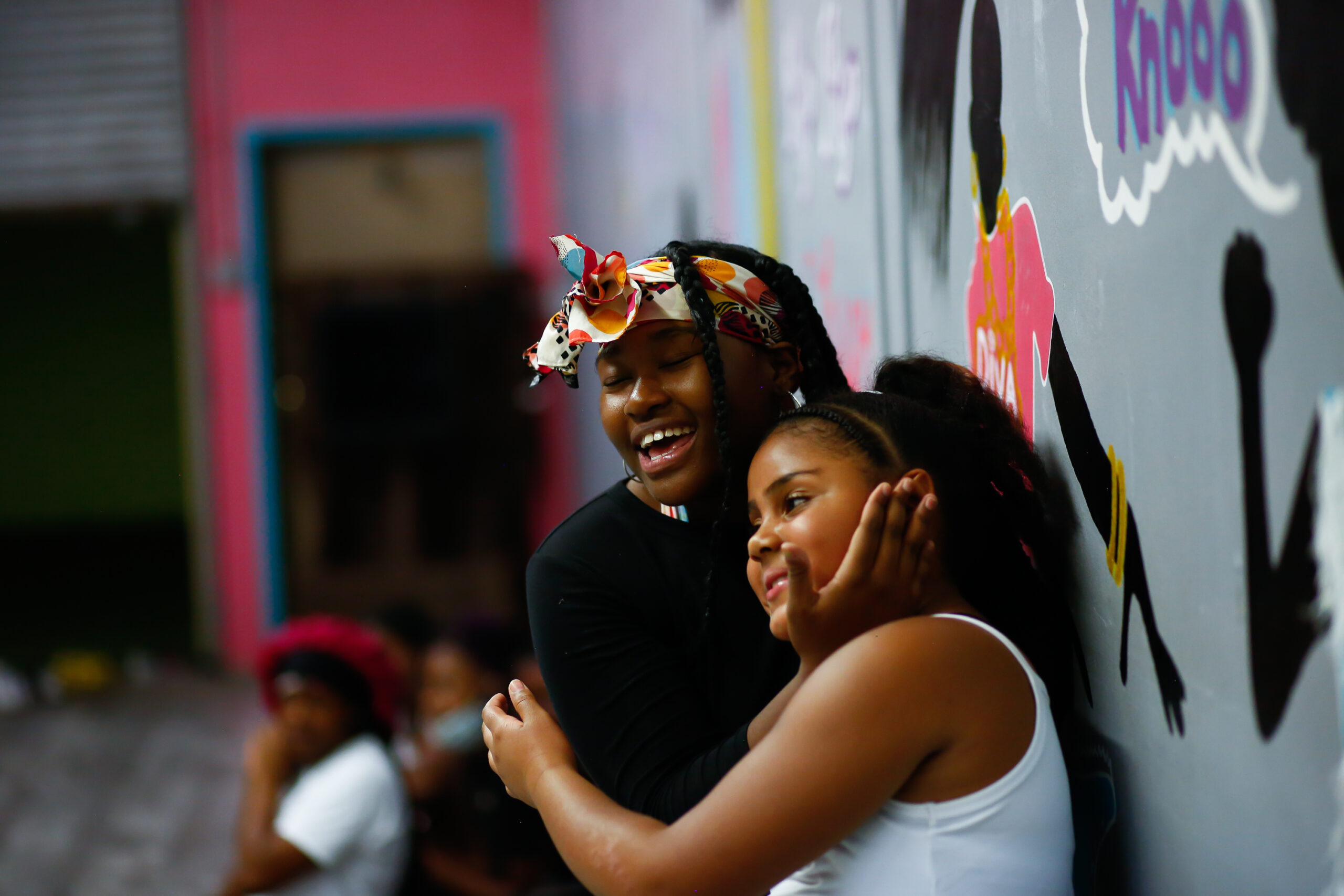 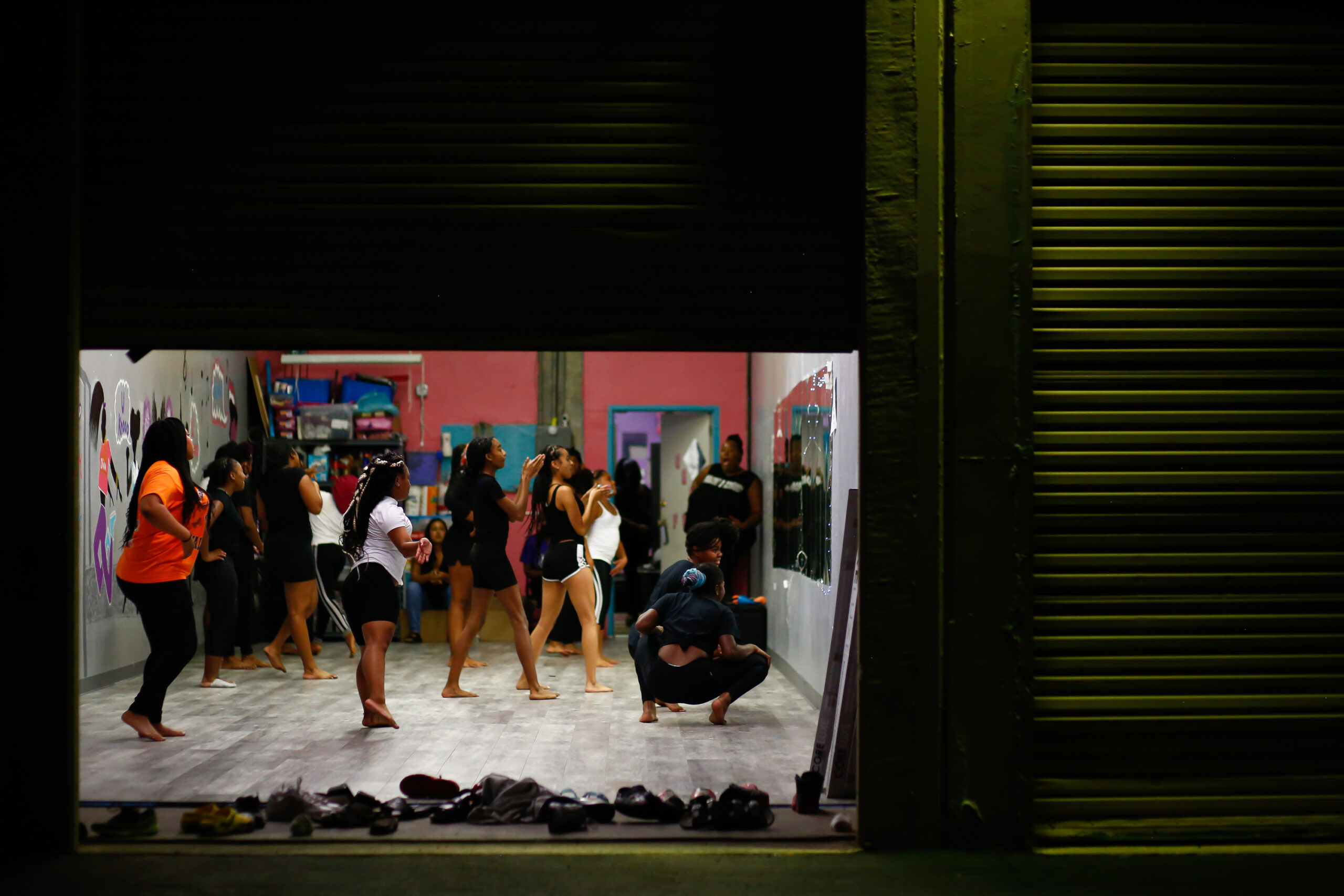 Halfway through practice, the team filed from the main studio to the entrance area with glass windows. The girls chatted away as they found space to sit on the floor, the space tinted orange by the setting sun.  Once settled, they began to say what they appreciated about each other. The girls were timid at first, only saying a few words at a time, but within minutes, it was an avalanche of compliments that lasted about a half hour.

“I love how courageous you are.”

“I learn something new from you every day.”

“You always let me know what’s on your mind.”

“I love that you always have a smile on your face.”

“You’re always ready to help me.”

“I love your curls.”

It’s a practice they always do before a performance. Jackson said it’s easy for the dancers to get discouraged if they don’t get a routine right away, so she makes a point to do this exercise when anxiety levels get high.

When they were done, 14-year-old Ashlynn Salazar told her teammates to reach out to her at any time.

“I struggle with depression so you guys can come to me at any time because I will understand what you are going through,” she said. “You can sit down and cry and I will just hug you. We’re in this together.”

The team also gives the girls access to supportive adults. Jackson will regularly check in with the girls one on one. She said some of them will come to her directly and others she takes aside. She also provides writing assignments for the girls to encourage them to reflect on themselves.

“I want to build everyone’s spirit,” Jackson said. “We have some girls who come in with zero confidence and then we tell them you did amazing and they’re like ‘I didn’t even notice until you guys told me so it’s a great feeling.’ We try to push different things to help them.”

Over the past seven years, Jackson said the group, started as something to occupy the girls, has transitioned into her family. She said the girls make her a better person and she works to make sure the girls have everything they need.

“I don’t have children and I can’t have children,” she said. “It gave me this warm and fuzzy nurturing feeling that I didn’t think I had. I was always such an angry person and they have softened me up so much.”

The team has existed long enough to witness the transformations members undergo. Ny’Asia Henderson, a 15-year-old, is as much of a success story as one could hope for. She has been with the team almost since the beginning. For a lot of her adolescence, she went to predominantly white schools and she was often ridiculed for her dark skin and her curly hair.

“I wasn’t comfortable in my own skin,” she said. “I didn’t want to be Black, I wanted to be white. But then I got around more girls that made me feel more confident in myself and accept myself for who I am and who I’m becoming as a young lady.”

Henderson said it was her mother’s idea for her to join the team to learn to “love my Blackness, my skin, and who I am as a person.”

Henderson said her mother had the right idea. She is thankful for all the moments of laughing with her dance sisters and the moments when they all learn routines successfully. She said it’s how her self-esteem grew.

As Thursday’s practice wrapped up, Lawler, panting slightly from the workout, looked a little less serious as she happily chatted with her teammates. She said she was a bit anxious for Saturday’s performance but that’s normal.

“I always get scared before I perform,” she said. “I pray by myself, then I go ask my coach if we can pray as a team. We walk out there and we start performing ... and then all my anxiety goes away.”

The ladies ended practice with a dance battle. They lined up in two lines with a partner and strutted to each other. Music and laughter echoed through the studio.

By the time they finished up, it was closer to 9 p.m. and dark had fallen. As they filed out, some groaned about virtual classes or discussed weekend plans. But they were all ready to be back here soon: They had just one final practice before the big performance, dancing together in front of a crowd.

Editor's Note: Some photographs in this story previously misidentified the subjects. Those photo captions have been corrected.