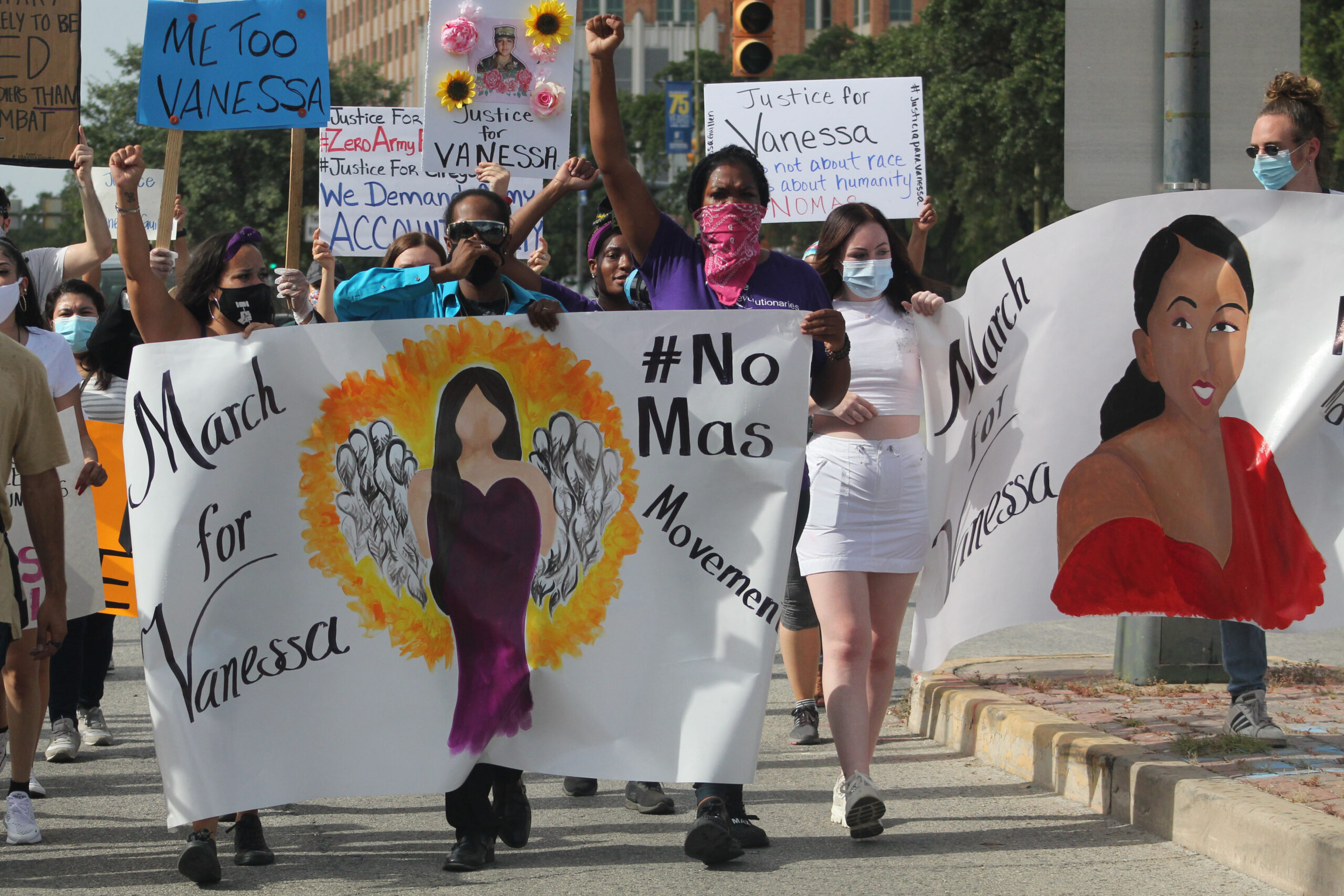 Three years after the #MeToo movement went viral, the military is having its own version of the movement: #IAmVanessaGuillen.

People are using the hashtag to share their accounts of being raped, sexually assaulted, and sexually harassed in the military. They say there often were few or no consequences for their attackers.

Their stories have sparked protests and rallies across the country and could be the catalyst for change in how the military handles sex crimes. Although the military has faced similar criticism for decades, the killing of Army Specialist Vanessa Guillen was the tipping point for this new movement.

Guillen's family immigrated to the United States from Mexico. She joined the Army right after she graduated from Cesar Chavez High School in Houston. Her social media accounts show her lifting weights and proudly posing for pictures in her uniform.

In a meeting with President Donald Trump in July, her sister Lupe Guillen recounted her sister's love for serving in the military.

"She said, 'If I have to go station in Iraq, if I have to go to combat, I'll die proudly because I'm a patriot and I'm serving the country,'" Lupe Guillen recalled her sister saying.  "But yet, she died on base. How can this happen on a military base, where you think everything is safe, but yet the soldiers are not safe?"

Guillen was reported missing in April. In late June, her mutilated body was found burned and dismembered by the Leon River, not far from Fort Hood.

Her family was dissatisfied about the search for Guillen, saying to the media multiple times that the Army would have searched longer and harder for a missing pair of night vision goggles.

Army officials said the man suspected of killing her, Specialist Aaron David Robinson, bludgeoned her with a hammer in an arms room, put her in a container, and took her out to a secluded area. They said he recruited his girlfriend Cecily Aguilar, who is the estranged wife of another former Fort Hood soldier, to help him hide her body.

Robinson died by suicide before he could be taken into custody by police. Aguilar is facing charges for her alleged role in the crimes.

Guillen's family said she told them she'd been sexually harassed by Robinson in the weeks leading up to her disappearance but was too afraid of retaliation from superiors and other soldiers to report it.

The Army said it has interviewed hundreds of people about the case, but found no credible evidence that Guillen was sexually harassed by Robinson.

If soldiers report being sexually harassed or assaulted in the Army, the Sexual Harassment/Assault Response and Prevention program is supposed to navigate them through a process to seek justice.

"These are issues of critical importance not only to our readiness but to taking care of soldiers. It is an item of importance to every commander up and down the chain of command," said Jim Helis, who oversees the Army SHARP Program.

This is how he said SHARP is supposed to work:

Soldiers who are sexually harassed or assaulted can file a restricted or unrestricted report. Restricted reports are withheld from the chain of command and allow a person to get medical help and other services. But they can't seek legal action against the perpetrator.

Unrestricted reports allow for the same access to services plus the addition of legal services. But the soldier's chain of command is told about the investigation.

Soldiers can change reports from restricted to unrestricted but not the other way around.

The Army doesn't necessarily think that's a bad thing. Helis said it's a sign that the SHARP program is making a difference.

There's no way to know if the increased number of reports is because the SHARP program is working well or if more people are being victimized. But there's a gap in what is being reported and what people are experiencing.

A San Antonio Army veteran named Sarah joined the military on a whim in 2008. Sarah asked that we not use her last name because she fears harassment or revenge for sharing her story.

She said she experienced everything from sexual comments to attempted rape. It started in basic training and got worse.

"That's when everything else started happening, like the guys slapping my ass and then making comments about the things that they would do," she said. "And it went all the way from privates to master sergeants and lieutenants."

She said those kinds of sexual comments were normal in the Army.

"You work in an environment as a female, and it's a predominantly male environment and men talk," Sarah said. "I mean we had guys come in and tell us about what they did to their wife last night."

Sarah said a sergeant sexually assaulted her after a night of playing pool and drinking. He took photos of her and showed other soldiers they worked with. She said a lieutenant later tried to rape her at a friend's apartment.

She never reported any of it.

"I had other friends that I would talk to, and they would tell me, like, 'Oh I made a SHARP complaint but nothing ever got done about it,'" she said.

Interviews with other people who've served in the military paint a similar picture of a culture where sexual harassment is tolerated and sexual assault isn't always easy to report.

"I can't think of one woman that can say she's never experienced sexual harassment," said Deshauna Barber, the CEO of the Service Women's Action Network, known as SWAN. The organization connects female service members with a variety of resources. Barber has also been an Army reservist for around 10 years.

According to Barber, Army culture lacks a basic understanding of what sexual harassment means, despite regular training on it. When sex crimes are reported, Barber said, perpetrators aren't necessarily discharged from the Army or even prosecuted.

In September, several members of Congress introduced the "I am Vanessa Guillen Act."

Among several initiatives, the act would make military sexual harassment a crime, move prosecutorial authority outside of the chain of command for sexual assault and sexual harassment, and create a legal office to investigate accusations and make recommendations for punishment.

It's the kind of change organizations like SWAN have spent years pushing for, but activists say it might still not be enough unless the culture of the military changes.

"I see soldiers get kicked out of the military so often for DUI and drug-related offenses," Barber said. "I have yet to see somebody get kicked out for sexual harassment or sexual assault, and that is an absolute problem."