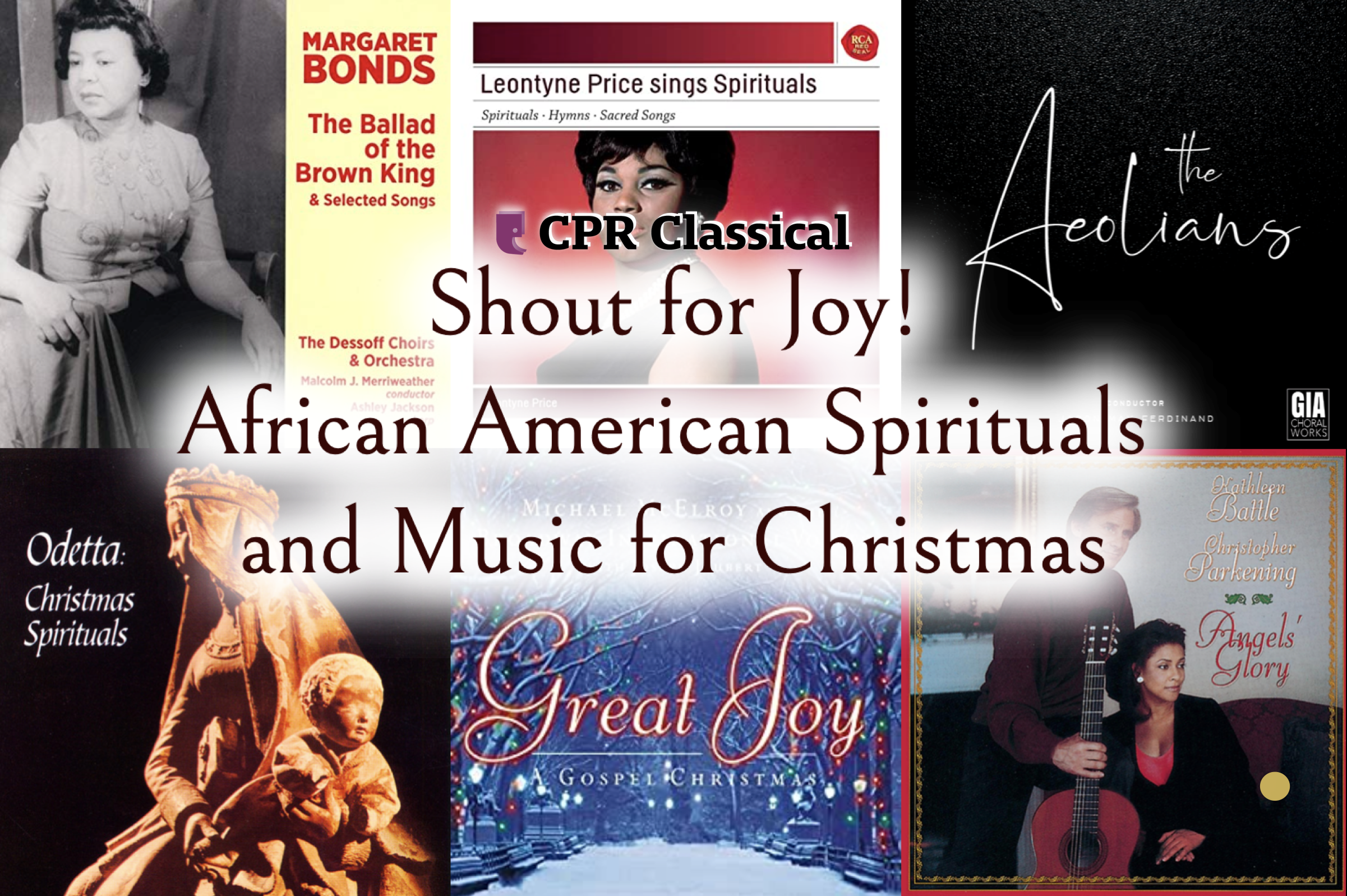 Several times during CPR Classical's  Sound of the Season this month, we will be airing "Shout for Joy! African American Spirituals and Music for Christmas." This show grew out of my desire for a deeper exploration of our country's full musical heritage, especially critical in light of this year's extraordinary events. My guest on the show is M. Roger Holland II, a former member of the Harlem Boys Choir who has also collaborated with several of the artists featured on “Shout for Joy!” He now teaches African American Music and directs the Spirituals Project Choir at the University of Denver. Holland not only contributed to the playlist of the show but shares insights on what these works mean to him at this moment.  -- CPR Classical Program Director, Monika Vischer

I woke up recently and contemplated CPR Classical’s “Shout for Joy!” playlist compiled by Monika Vischer and thought of the classic Irving Berlin tune “White Christmas” written around 1940/1941. The tune begins: “I’m dreaming of a White  Christmas, just like the ones I used to know…” In my head, I amended the lyrics: “I’m dreaming of a Black Christmas …” The “Shout for Joy!” playlist spoke to me as more than simply Christmas music, but music selections that reflect who I am as an African American, and the myriad ways I have experienced Christmas culturally.

I often use cooking analogies in my choir rehearsals. I sometimes speak about how my mother used to reach into the cabinet spice rack and season the food she cooked. The old adage: “Season to taste” - how one seasons one’s food is based on a number of factors, including personal taste and life experience. When I hear this playlist it reflects aspects of my own personal taste and lived experience.

The very first selection, “I Can Tell the World” is a spiritual I’ve known for a while, though it’s not as well known as some others. I love the counter-play between the ostinato (repeating phrases) in the lower voices and the melody in the upper voices, as well as the rich harmonies.

Another song that stands out for me is “My Lord, What a Mornin’ ” sung by Harry Belafonte. The Harlem-born “King of Calypso” burst onto the scene in 1956 with his smash hit version of the Jamaican folk song “Day-O” (The Banana Boat Song). Belefonte joined the Civil Rights Movement early on, and explored his African American roots with two classic collections of spirituals for which poet Langston Hughes wrote the liner notes. This arrangement comes from the first of those albums. His vocal control in this spiritual is mesmerizing; the way he is able to sustain those long phrases.

Then there is “The Ballad of the Brown King” by Margaret Bonds. I love hearing the orchestration on this. It evokes memories of “high church” for me where many Black churches appreciated western classical music. What cements this feeling is when the pipe organ enters. It just feels like church, where so much good music is made, especially during the holidays.

I love the earthiness of Odetta’s “Rise Up Shepherd and Follow,” the grandeur of Hailstork’s “Shout for Joy,” and the rhythmic vigor of “Reign On, King Jesus.” There’s also sheer joy and gospel energy in “Hark! The Herald Angels Sing” by the Broadway Inspirational Voices.

In recent years, and especially this year, race and representation have come to the fore while we as a nation grapple with issues of diversity, equity and inclusion. I am a classically trained musician, but my musical experiences are not limited to western classical music.

When I hear the music featured on CPR Classical’s “Shout for Joy!” I feel represented. I feel “seen” and that my experience of Christmas is real and valid. Very often, particularly when listening to classical music, whether in a concert hall or on the radio, it seems that the contributions and experiences of African Americans are left out; they are absent. This playlist does just the opposite. It recognizes not only the music and performances of African Americans, but it does so in a way that also recognizes the diversity of the African American experience.

Listen to Shout for Joy! African American Spirituals and Music for Christmas

Listen to the Shout for Joy! playlist on Spotify

Racism And Sexism Stalled Her Career. Now Florence Price Is Finally Being Heard