This is part of a series by Colorado Public Radio News about housing instability in Colorado.

About 10 people call a parking lot behind a church in Arvada home. But it’s not home in the sense most people think of home. They can’t hang out there during the day. There’s no comfy couch – and no door they can close to the outside world. But it’s where they sleep at night – in their cars.

Up until recently, Mitchell Robertson parked their white Ford E250 van in any public lot they could find at night that didn’t have signs prohibiting it. They just secured a spot in the church lot.

“It’s a lot quieter. I sleep with a little less anxiety, knowing it’s not just an open parking lot out in a shopping center somewhere where any old random person can come through doing whatever,” Robertson said.

Colorado Safe Parking Initiative runs the lot. They provide safe places for people experiencing homelessness to sleep in their cars. The program operates several lots, mostly in and around Denver. A similar lot operates independently in Breckenridge.

More people are being forced to take extreme measures as the state’s housing costs and population soar. The National Low-Income Housing Coalition estimates that about half of Colorado’s low-income renters are shelling out more than 30 percent of their pay for housing. At that threshold, people are more likely to start skipping payments on other things, like health care, education and healthy food. At a certain point, some people just give up on the roof over their head. 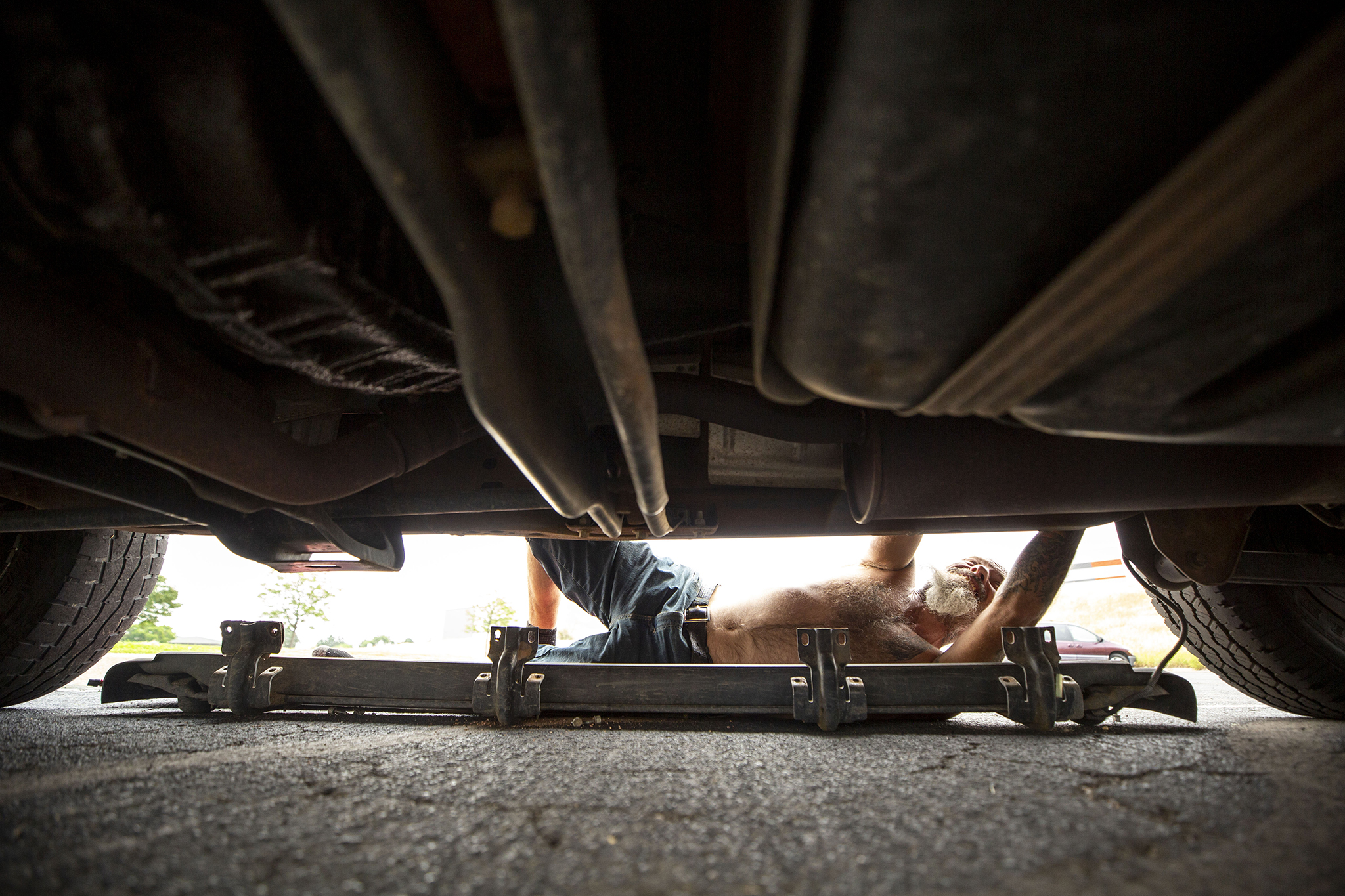 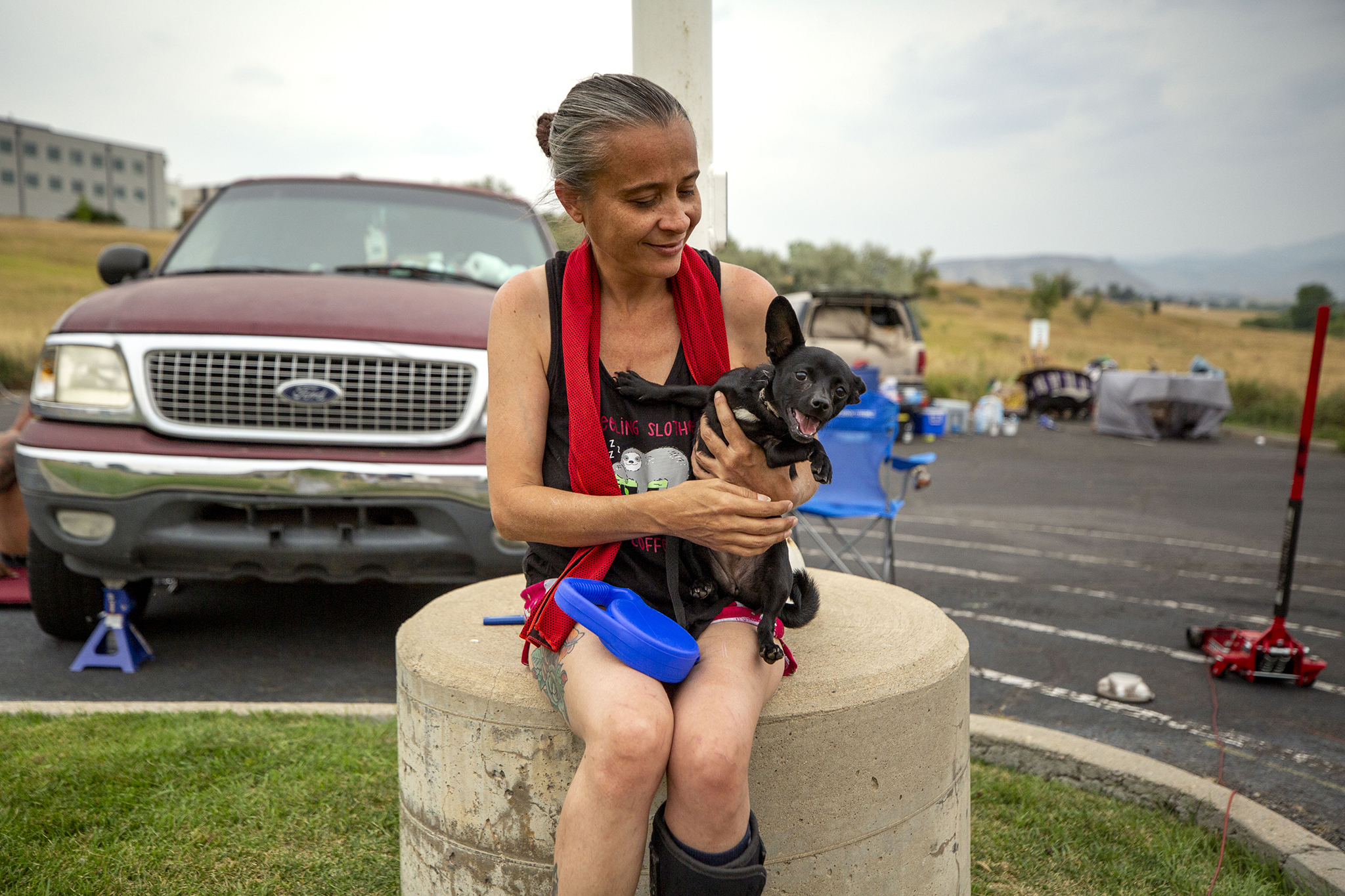 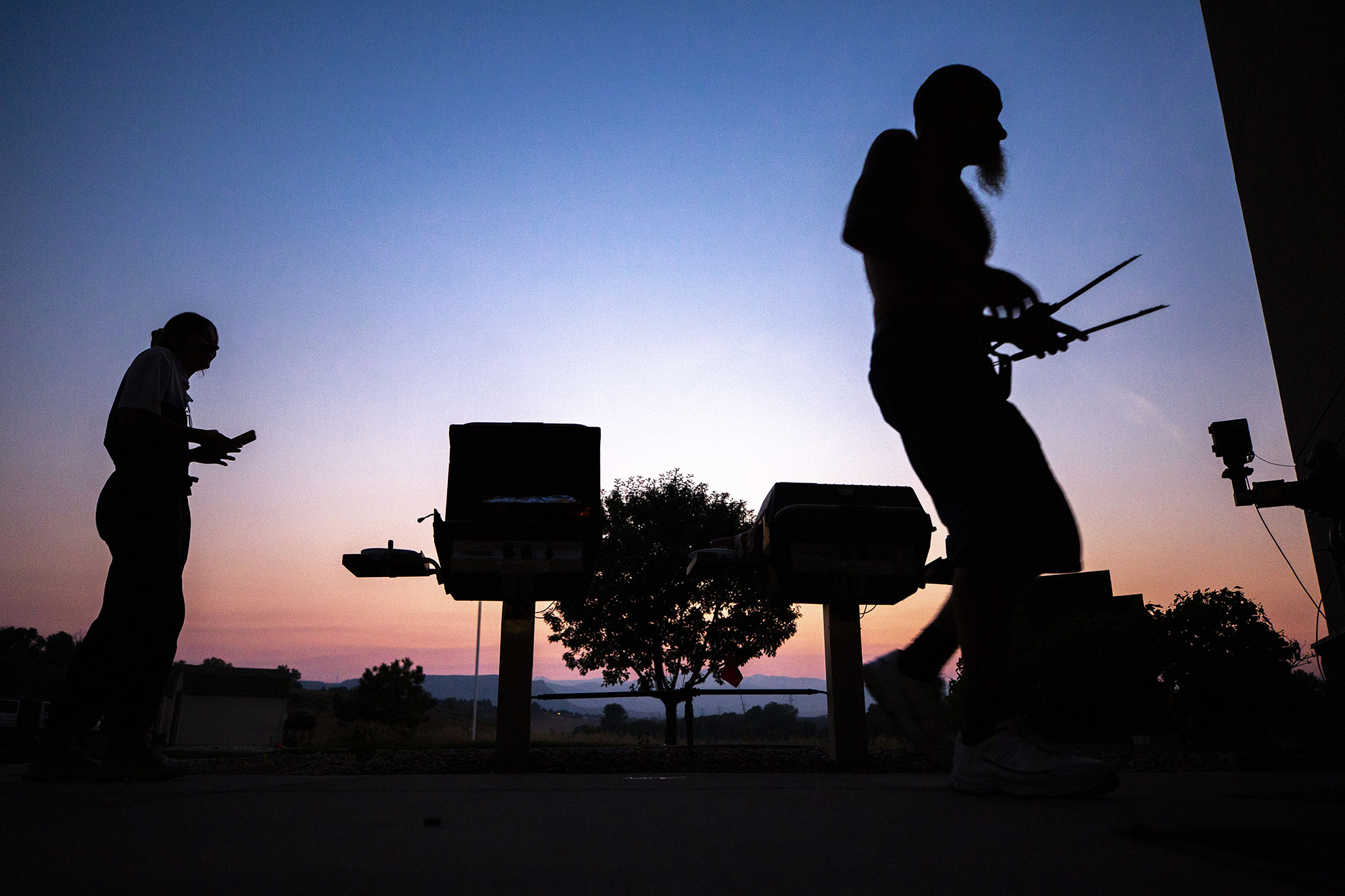 It’s not always obvious why somebody ends up sleeping in their car.  It could be domestic violence, or substance abuse. It could be a mental health crisis --  or really, any kind of health crisis. It might be a job loss.  It’s often hard to pinpoint a single event that pushes people over the edge. But once they find themselves without shelter, for whatever reason, it’s easy to get stuck.

The “financial situation that most of us find ourselves in is very difficult to get out of,” Robertson said.

Robertson has a part-time job at a Best Buy in Westminster. They work on the Geek Squad, mostly fixing laptops and setting up new PCs. They want to continue working with computers.

Robertson came to Colorado a little more than a year ago after riding out the start of the pandemic in Utah at their mom’s house. They've had a lot of jobs over the years. They worked at Lowes before Best Buy. In Utah, they worked at a gas station. They say at one point they managed a bookstore.

“I’m not one to want to just sit in a corner somewhere and do nothing.” 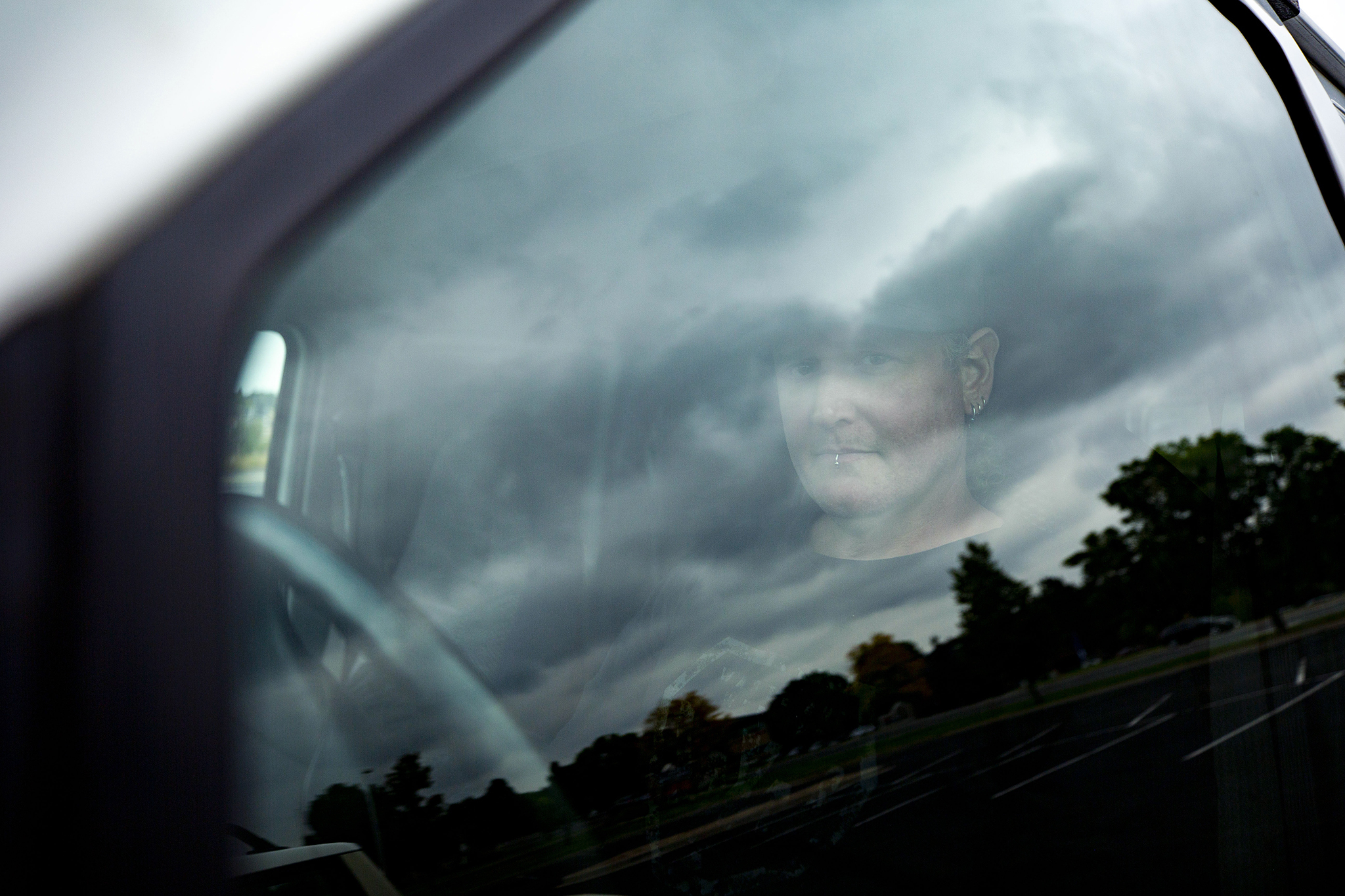 Kevin J. Beaty/DenveriteMitchell Robertson sits in their van, where they've been living in Arvada through a partnership with the Colorado Safe Parking Initiative. Sept. 30, 2021. 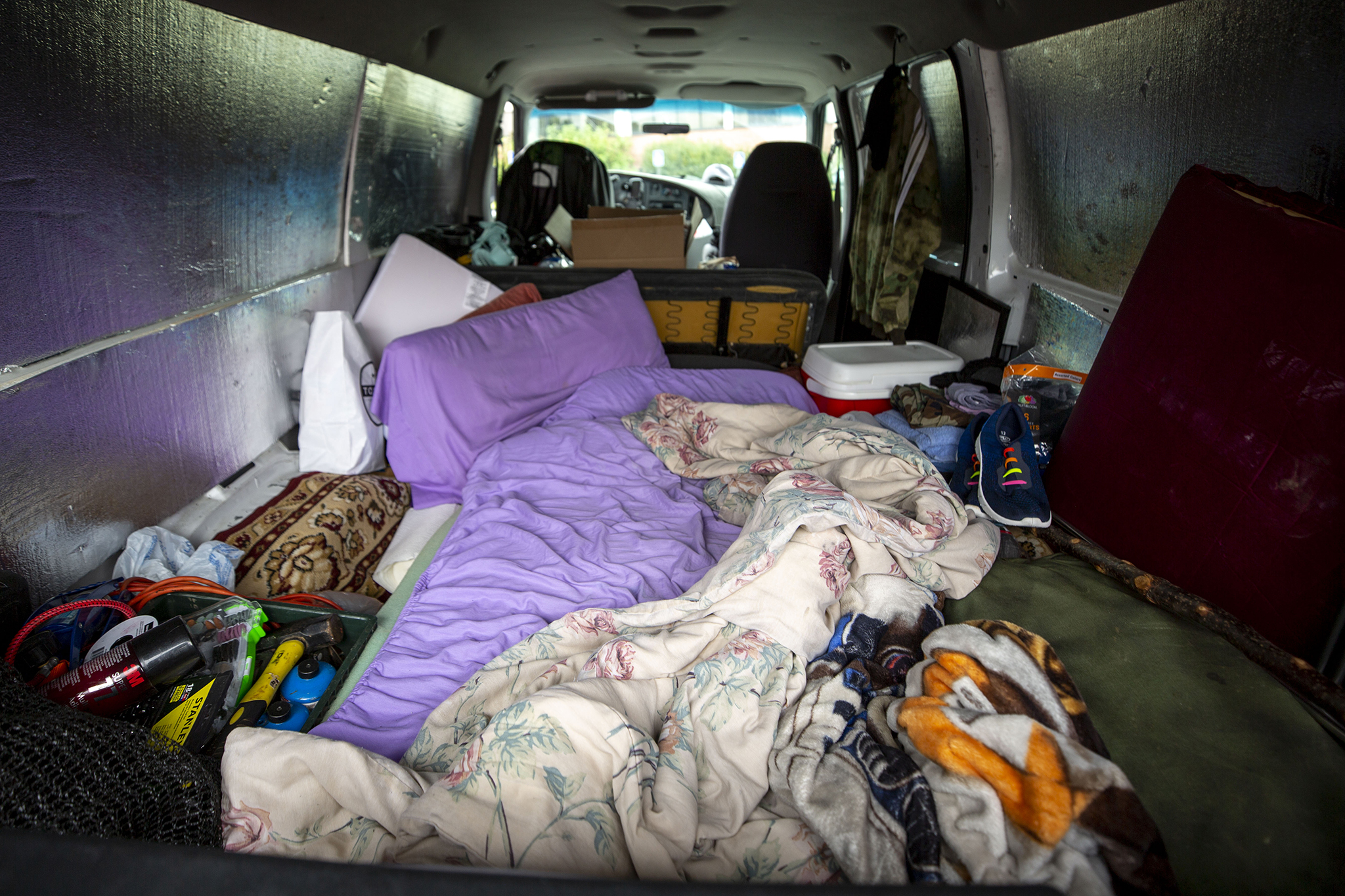 Kevin J. Beaty/DenveriteInside Mitchell Robertson's van, where they've been living in Arvada through a partnership with the Colorado Safe Parking Initiative. Sept. 30, 2021.

They figure about $1,500 would cover the first month’s rent and deposit on an apartment in Denver, plus a little extra cash to get settled. The goal is to have a place by winter.

Their pay on the Geek Squad is $16-per-hour – better than the state’s minimum wage of $12.32. But, it’s still tough to save enough cash for housing, Robertson said.

“If I didn’t have to spend money on gas and insurance and phone bills and everything – ‘cause I still have bills, and still function in this society with everything I have to pay for … on top of eating … so it’s taken some time to get the money together,” they said.

They want more hours at Best Buy and to pick up extra shifts when they’re available. But they haven't been able to get full-time hours.

V Reeves is a case worker for the Safe Parking Initiative. They talk about how tough it is to break the cycle once a person loses their housing.

“We take for granted that feeling of safety and of peace that we come home to at the end of the day and that is really fuel for things like good sleep, for being able to plan for the next day, being able to rest mentally so that you can actually have the foresight into the future,” Reeves said.

Reeves brings food and helps people with things like navigating the healthcare system and finding housing. They recently helped get Jonathan Severs into a small one-bedroom apartment in a squat brick building in north Denver. Severs was living out of his car in a church parking lot in Golden.

There were hardly any boxes to unpack the day he moved in. But there was a package of new pots and pans on the kitchen counter.

“I’m ready to cook again after being in the car for the last 12 months. You kinda miss the little things …  just being able to be organized and being able to cook for myself … that’s what I’m happy about,” Severs said.

Severs has serious health issues. Last year, he was on dialysis for six months in Kentucky – where he’s from. He moved into a hotel when he got out of the hospital and did odd jobs to get by.

“I was doing DoorDash and Uber Eats at the time to survive, but I was barely paying my weekly bill there at the hotel, and I didn’t see myself getting on top and ahead,” Severs said.

He decided to take off in his car to save money and see the country. It was harder than he expected. He didn’t realize people weren’t allowed to sleep at rest stops. He had an accident that nearly totaled his car in New Mexico while out driving for a delivery service.

He ended up in the hospital again in Colorado. The Safe Parking Initiative helped him work with Medicaid to pay off thousands of dollars in bills from the recent hospital stay.

Severs recently started work at a mobile kitchen filling take-out orders.  It’s a steady job, he said, and the pay is good. He’s glad to have a set schedule – and he's hopeful he’ll be able to save some money in his new situation.

“Trying to get back to where I used to be,” Severs said.

Correction: An earlier version of this article misstated that Colorado Safe Parking Initiative runs a site in Breckenridge. That site is run independently by a different group.

Anyone seeking to stay at one of the Colorado Safe Parking Initiative's sites must have a permit. Apply at ColoSafeParking.org

More stories to read about housing in Colorado: