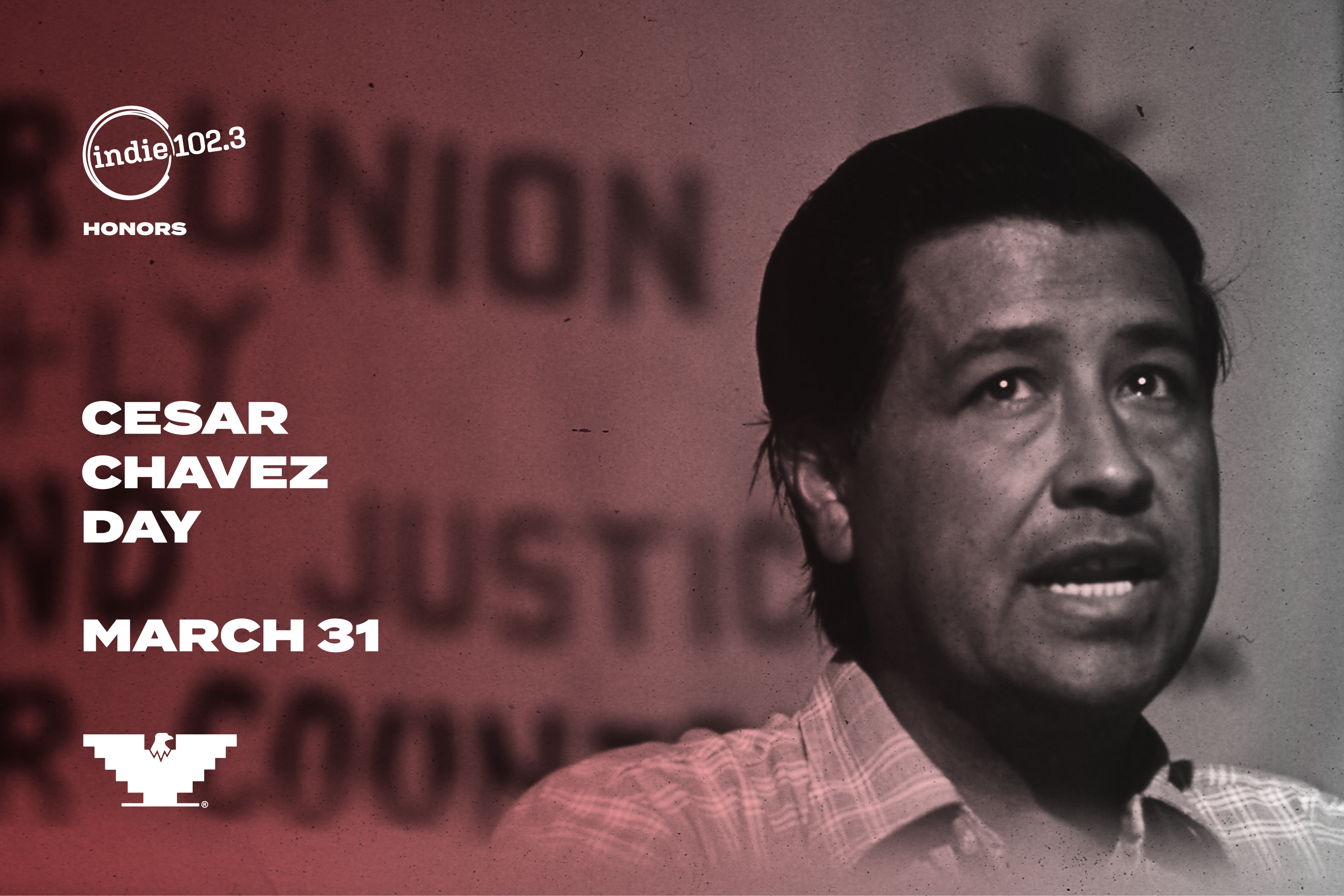 Bringing you songs that support and continue the Chicano Rights Movement.

Overly simplified, Chicano identity celebrates Indigenous heritage, culture, and history, with particular emphasis on Mexican roots. Much of the Chicano Rights Movement lends itself to fighting for justice and equality of those who come from native Mexican descent, and education and practice of pre-Columbian colonization and genocide. Though the Chicano Rights Movement coincided and worked alongside the Civil Rights Movement, it wasn't until 2014 that a federally recognized holiday was created to honor a leader among it - Cesar Chavez. The day is celebrated on the date of his birth, March 31st.

Cesar Chavez was a co-founder, along with Dolores Huerta, of the organization, the National Farm Workers Association, and merged with the Filipino founded Agricultural Workers Organizing Committee, to create United Farm Workers. These organizations were created to protect the rights of California farm workers, who were (and still are) working for below poverty pay. Chavez helped organize and educate workers, while traveling the United States. He, like Dr. King, took to his organizing in a non-violent manner. He helped organize marches, protests, and boycotts.

Denver's contribution to the Chicano Movement was not - and is not - insignificant. Denver's own Corky Gonzales led the Crusade For Justice in the city, fighting for justice and equality in the city. In 1969, 150 students staged a walkout of West High School after a teacher made racist remarks about those of Mexican descent, which contributed to the attendance of the First Chicano Youth Liberation Conference. Denver has, in fact, been celebrating Cesar Chavez since 2003.

The Movement is still being supported to this day, that fights for equality, justice and education across the country. Denver's Chicano community is home to internationally known organizers, artists, and musicians.

In the same way that we celebrate Dr. Martin Luther King, Jr., we are celebrating the music that supports non-violent protest, with songs throughout the day from artists uplifting the Chicano Movement.

Alicia Armandariz grew up in East Los Angeles, a teenager in the 1970s. She saw and fostered the growth of 2 movements spreading through the city: punk rock, and the Chicano Rights Movement. We know her as Alice Bag, who found a home in the budding and in the Chicano Movement, after attending one of the city’s more violent protests with her family, in August 1970, when the Chicano National Moratorium Committee organized a march against the Vietnam War, and which ended with a reporter dead and 40 more citizens hurt after police tried breaking up the protest. Alice Bag continues to fight for equality with punk rock, and in the Chicano community.

The title track to Chicano Batman’s 2020 album directly lays out a large issue facing Indigenous communities across the Americas - that no matter the issue, the voices and presence of the original inhabitants and stewards of the land are excluded. Created invisible. Taught to the masses that they don’t exist, or that they are immigrants to the United States and Canada. Chicano Batman confronts those complexities of Chicanidad throughout their catalog, and here, simplifies the concept of Indigenous erasure into a powerful, four minute song. Chicano Batman returns to Denver to perform in the Northside - a cradle of the Denver Chicano movement - at The Holiday Theater April 8th.

Growing up on the border, the femmes of the punk band, Fea (fay-uh) - which translates to “ugly girl” in Spanish - have seen and experienced their fare share of inequity in the music scene based on gender, but also because they’re Chicana. They blend the music they grew up with - Rancheras and Nortenas - with the music they discovered as teens - punk rock - to create a sound that confronts those inequities in sound, and in both English and Spanish. Fea fight for women in music, but also for representation of Chicanas in the scene, echoing their mentor (and producer), Alice Bag.

A part of this month’s Local 303, we’ve been getting to know Lolita’s pop music all month long. In 2019, she released “Toda Mi Gente,” which translates to “all my people,” Lolita made the conscious decision to create pop music with a message with “Toda Mi Gente,” which confronts oppression in all forms. A part of the band, 2MX2, Lolita is no stranger to crafting songs supporting the rights of the underserved and underrepresented - especially the Chicano community. Lolita garnered an honorable mention in an international songwriting competition for Toda Mi Gente, which features Big Samir of The Reminders in it.

Denver’s role in the Chicano Rights Movement was already in full swing by March of 1969, when 150 students staged a walkout of West High School after a teacher made racist remarks about those of Mexican descent. Supported by Corky Gonzalez, who would become known as one of the “Four Horsemen” of the Chicano Movement, and the Black Panther Party, protests were staged to create representation for these students in the Denver school system within curriculum and staff. Denver’s own Los Mocochetes dedicate the video for their single, Que Viva Revolucion, to these students, and the continuing Chicano Rights Movement. The band is Denver raised, creating “Chicano Funk,” or “protest music you can dance to.” In fact, they’ll be performing this weekend at the Cesar Chavez Day Parade, at Cesar Chavez Park from 11-2.

Denver’s Pink Hawks bring together a multitude of sounds, from a wide range of musicians. It would be too easy to place them under a Latin label, when they pull inspiration from all over underrepresented communities and sounds, including Afrodiaspora. They are, however, firm supporters of Chicanidad, with many members celebrating and uplifting their Indigenous roots to present-day Mexico. “Elote,” (eh-low-tay) in particular, celebrates the hustle and innovation of Chicano entrepreneurs, who quite literally feed the streets, with ancestral connection - elote, of course, is corn. Those street vendors who sell elote are in constant danger of being attacked and robbed, or even arrested and deported. Elote is a celebration of these vendors, the heritage, and feeding the people.