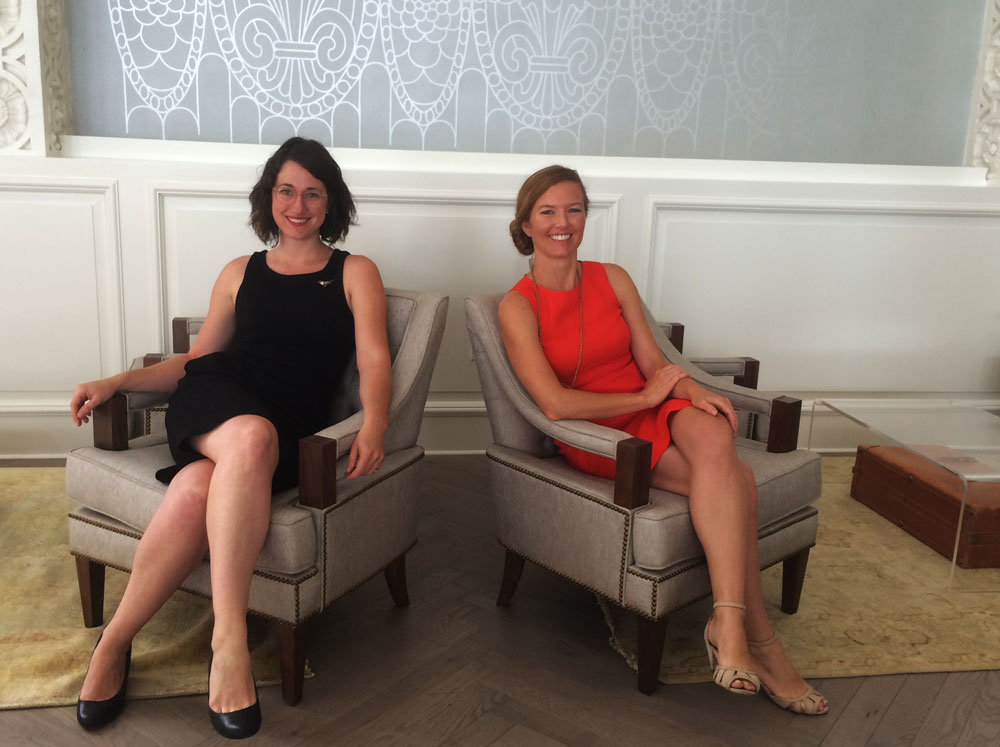 Visitors who sneak past the party and into the building may notice the many artworks sprinkled throughout the Great Hall and wings of the 120-year-old station.

Curated by the Denver art consultancy Nine dot Arts, the more than 600-piece collection includes newly commissioned works by a range of Colorado artists and historical artifacts like a collection of 1940s celebrity trading cards and other items found under the station’s benches during construction.

The Crawford Hotel, an independent hotel on the upper levels of Union Station, houses much of the collection within its 112 guest rooms.

One of the project's goals for Nine dot Arts founders Martha Weidmann and Molly Casey was to contribute to the experience, through art, of staying in one of the luxury hotel’s private rooms.

Colorado Art Report host Chloe Veltman met up with Weidmann and Casey at The Crawford earlier this week.

While touring Union Station, Weidmann pointed out that the hotel’s developers -- Dana Crawford, the hotel’s namesake, and Walter Isenberg -- were closely involved in the art curation process for the $54 million project.

“They were there for every single selection that was made," Weidmann says. "The two of them were really the founders of the idea that this art collection should be something that supports the local creative community and showcases the talent that we have here in Colorado."

Weidmann and Casey described the inspiration behind the Union Station project.

CPR: What were your goals for the artwork in The Crawford Hotel?

Molly Casey: The goal was really to create a sense of surprise, luxury, elegance and eclecticism. We wanted to make each area feel unique and completely different from another. The thing that ties it all together is quality. Every piece here is hand-selected and done by a local artist to make sure that it all ties together nicely and offers a unique experience every time you turn a corner.

CPR: What function do you think art plays in a hotel setting?

Martha Weidmann: Initially, artwork was put into hotels to help them feel less institutional. Artwork was one of the things that made a hotel room feel more like home. But now, in this day in age, you see hotels using artwork as an element of discovery, a way to try and humanize their buildings, to make them very memorable, and most importantly, support the local creative community, and that’s what they’re doing here at The Crawford.

CPR: How did the history and architecture of Union Station inspire the art you chose for this space?

Martha Weidmann: It’s a huge inspiration for the art collection here. When we first started the project, Dana Crawford, for whom the hotel is named, gave us a stack of about 20 books and said, 'Here, take this. Study up.' We learned so much about the history of this building and the era in which the development was happening originally in this space.  And it was so important for us to make that tie to the historic station, the renovated station in 1914 with the addition of the wings, and then the reopening 100 years later in 2014.

To see a timeline of the development of Denver's Union Station, click here.